Visiting the snow monkeys at Jigokudani 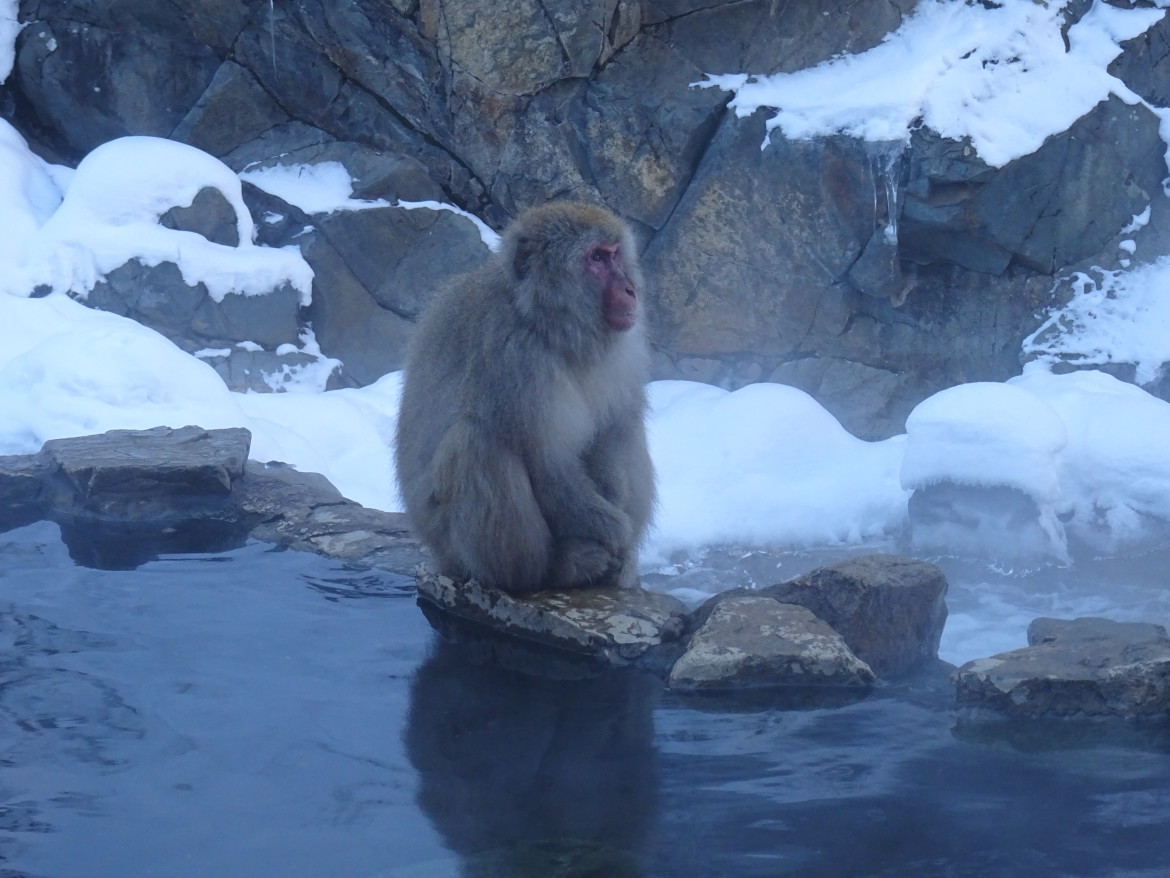 I’m not sure when I first heard about the Jigokudani Monkey Park, but by the time I’d booked my flight to Japan, I’d seen enough pictures of the snow monkeys to know that I wanted to go and visit them during my trip. These Japanese macaques come down from the snowy mountains above Nagano to bathe in the hot springs there – they enjoy their own onsen, just like many humans who come to Japan do! Monkeys and volcanic activity; two of my favourite things!

I was pleased to discover that I could make this visit as a day trip from Tokyo, albeit a very long one. Although there’s not much official information online, there are many blog posts out there explaining how to do it, suggesting various options, some more confusing than others. I found that these days it is actually very easy; I expect the route has improved in response to more and more tourist interest.

I was feeling better every day after beginning my time in Tokyo with a trip to the hospital, so happily I was feeling up to making a painfully early start, picking up the 6.34am shinkansen (bullet train) from Ueno JR Station, which was easier for me to reach than Tokyo station where the train starts, headed for Nagano. With my Japan Rail Pass, all I had to do was to show my pass at the ticket gate, then find the right platform and wait in the line for one of the unreserved seating coaches – it is marked on the platform floor where to wait for each car, and the electronic display tells you which are unreserved. This was my first experience of the shinkansen and I was seriously impressed; tons of legroom, clean, quiet, spacious, polite and considerate passengers, and on time – all things that you don’t often find when using trains back home in the UK! There’s a trolley service for food and drink, or you can bring your own on with you. We sped out of Tokyo as the sun was rising, and I enjoyed watching the city roll by – I even saw Mount Fuji again (apparently I’m very lucky with this!).

It took around 90 minutes to reach Nagano JR Station. Once through the ticket gates, there are notices up telling tourists how to reach the Snow Monkey Park. I opted to purchase the Snow Monkey Pass; this covers all travel from Nagano to the park, as well as the entrance fee, and at 2900 yen it saves you a bit of money too. I had to head down to the Nagano Dentetsu Line ticket office to buy it, but there were plenty of signs pointing in the right direction. There are various train and bus options to reach the hot springs, but to me the quickest and easiest way by far seemed to be the express bus from Nagano Station. There wasn’t one leaving until 9.05am so I had to wait a while; I perhaps could have caught a later train from Tokyo after all.

The bus took around 40 minutes and dropped us right by the entrance to the park. Stops were announced in Japanese and English, so it was easy to know when to get off. I had read that the route up to the monkeys was a snowy uphill trail of 1.6km, so I had come prepared, wearing my walking boots, and I was very glad that I had; sneakers would not have cut it, but my boots gripped the sometimes-icy path well. This was the point at which the magic began. A few minutes up the hill, and I was in a snowy forest, on a path winding around pine trees and streams. It was bitterly cold but bright, the sun glittering off the tightly-packed powdery snow lining the way, as I climbed higher, then emerged into what looked like an Alpine valley, with the cute onsen resort buildings sitting underneath roofs of white. It was a beautiful start to my visit and I was already in a good mood by the time I reached the park entrance. I passed through the small hut, and then I was in a little valley of snow, water, and monkeys! They were everywhere, not just in the water but foraging for food in the snow. There were a lot of people there already, but the monkeys just ignored the camera lenses.

The focal point was of course the famous hot pool where they like to relax. There was steam coming off the water and a smell of sulphur in the air; a reminder of how this water is naturally heated. Adults and babies basked in the water, shook themselves off on the rocks, and followed around the park staff who was periodically dropping pieces of food around the area. The monkeys were fascinating to watch in their natural environment; I’ve never been so close to wild animals before. They are beautiful creatures too. I could have stayed for hours, but after a while the icy cold forced me to give up, heading back down the trail to catch the bus back to Nagano Station from the opposite side of the road. The winter must surely be the best time to visit, and I am so happy that I was able to go at this time of year, but it really was chilly – make sure you wrap up, as well as remembering your walking boots!

I think this trip was one of the best things I have ever done; it was a magical experience and definitely one to tick off the bucket list. It’s definitely a must-do for any nature-lovers coming to Japan.