Walking in the footsteps of the Brontë sisters in Haworth, West Yorkshire 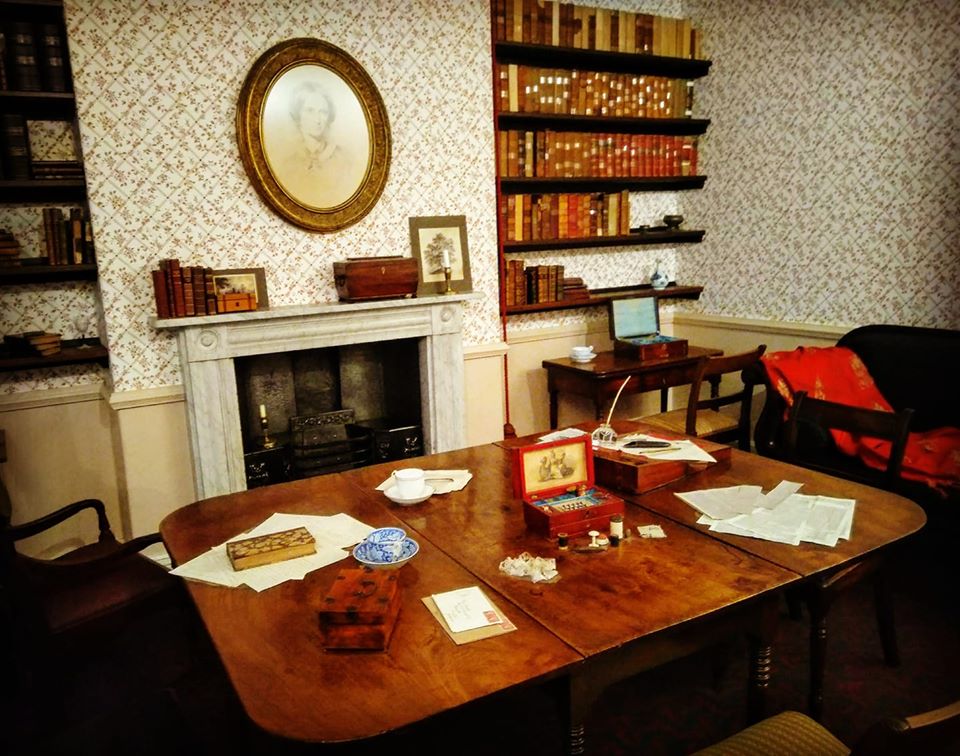 I’ve been a fan of the Brontë sisters ever since I was a ten year old with a voracious appetite for reading anything I could get my hands on, and my Mum gave me her copy of Charlotte Brontë’s Jane Eyre to try. I was completely entranced by the story of Jane, Mr Rochester, and the wife in the attic. Even if you’ve not read it I’m sure you’re familiar with the tale from the many TV and movie adaptations that have been made, and equally the same goes for Emily Brontë’s Wuthering Heights and Anne Brontë’s The Tenant of Wildfell Hall (although personally I always preferred Agnes Grey from Anne). Despite my long-term affection for the literary sisters, I had never managed to go and visit their old home, now the Brontë Parsonage Museum, in the village of Haworth on the West Yorkshire moors, until I took a short-term work contract in the nearby city of Leeds upon my return to the UK in 2018, and decided on a whim one Saturday morning to go and finally cross this off my list.

The Brontë sisters were born in nearby Bradford in the early nineteenth century and grew up in the parsonage in Haworth. They, along with their brother Branwell, had vivid imaginations from a very young age, and together created their own fictional world, writing down their stories in tiny, homemade books (a couple of which, many years ago, I had the immense privilege to actually hold in my hand, thanks to a friend who worked in the Special Collections at the University of Leeds Libraries, where some of them are now kept). While the sisters continued to write as they grew up, Branwell turned out to be a talented artist; sadly, his potential was never fully realised due to drug and alcohol addictions which took over his life until he died aged 31. The Brontë sisters’ three most famous novels, Jane Eyre, Wuthering Heights and The Tenant of Wildfell Hall were published in 1847 and 1848, at a time when female writers struggled to be taken seriously in the literary world, and so they took on the male pseudonyms of Currer, Ellis and Acton Bell in order to get their books into print. The influence of Haworth and their lives growing up can be seen in their novels, from the wild and windy moorlands which feature in so many of them, to the boarding school in Jane Eyre where Jane is miserable and loses her only friend to tuberculosis – Charlotte, Emily and their two older sisters were at one point sent to a boarding school where they were very unhappy, and were withdrawn by their father and brought back to Haworth after the two older girls both contracted tuberculosis and died.

Although Charlotte and Anne both took contracts as governesses and teachers, they were close to their father and returned to Haworth when they could. Emily was a complete homebody, and never took work outside the parsonage, preferring to keep house for her father, until she was the first of the sisters to die at aged 30, the year after the publication of Wuthering Heights, of that dreaded tuberculosis which took so many lives at that time. Anne died a year later, of the same affliction (in her final days she had travelled to the coastal town of Scarborough in North Yorkshire, in the hope that the sea air would ease her symptoms. If you are ever there, look out for her grave which is in a lovely, peaceful spot in the cliffs above the beach). Charlotte eventually married but died shortly after, in 1855, possibly of tuberculosis too. All three of them made a massive impact on the literary world at the time, and have continued to do so since.

It was easy to reach Haworth from Leeds on public transport; I took the number 60 bus (from the suburb of Kirkstall, where I was living, but it starts in the city centre) to Keighley, where I changed onto the charmingly-named B2 Brontë Bus (buy a daysaver ticket when you get on the 60 in Leeds; the same company runs both buses so you can use it on both). If you’re not sure where in Haworth to get off, tell the driver you’re wanting to go to the parsonage, and they’ll be happy to give you a shout. From the bus stop, it’s not too far to walk to the museum. I think the whole journey took around two hours. 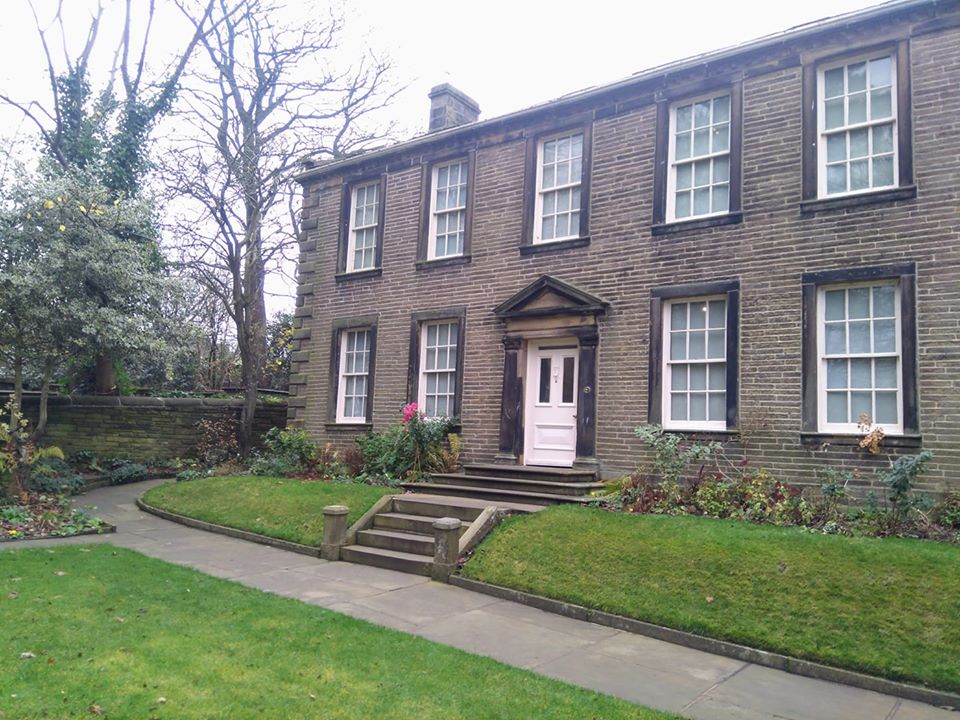 The Brontë Parsonage Museum has opening hours which vary by season, and is usually closed for the whole month of January, so do check on their website before you travel. There is an entrance fee, but it is completely worth it! The parsonage is not huge, but there is plenty to see inside. Each of the rooms has been set up as it would have looked when the sisters lived there, and there are so many artifacts from their lives on display. There are lots of information boards around, and the friendly and knowledgeable staff dotted around the museum are more than happy to answer questions and tell you more.

I absolutely loved being able to see so much of the sisters’ lives in the rooms there; their little portable writing desks, Charlotte’s tiny wired spectacles, various dresses which belonged to them, and some of those little books created as part of their childhood fantasy world set out in the nursery. It was a magical experience to wander the halls and floorboards that they did; to see what views they might have had if they stopped to stare out of the window mid-paragraph, and just to know that they had lived in this very house. I know a lot of people don’t believe in the idea of places having energy, but this one certainly did for me; as soon as I stepped into Branwell’s bedroom, I was almost hit in the face by a wave of sadness, fear and anxiety, which dissipated once I stepped out again. It felt as if there was most definitely some kind of sense of the Brontës still lingering there, despite all of the visitors.

The sitting room in which the sisters used to write 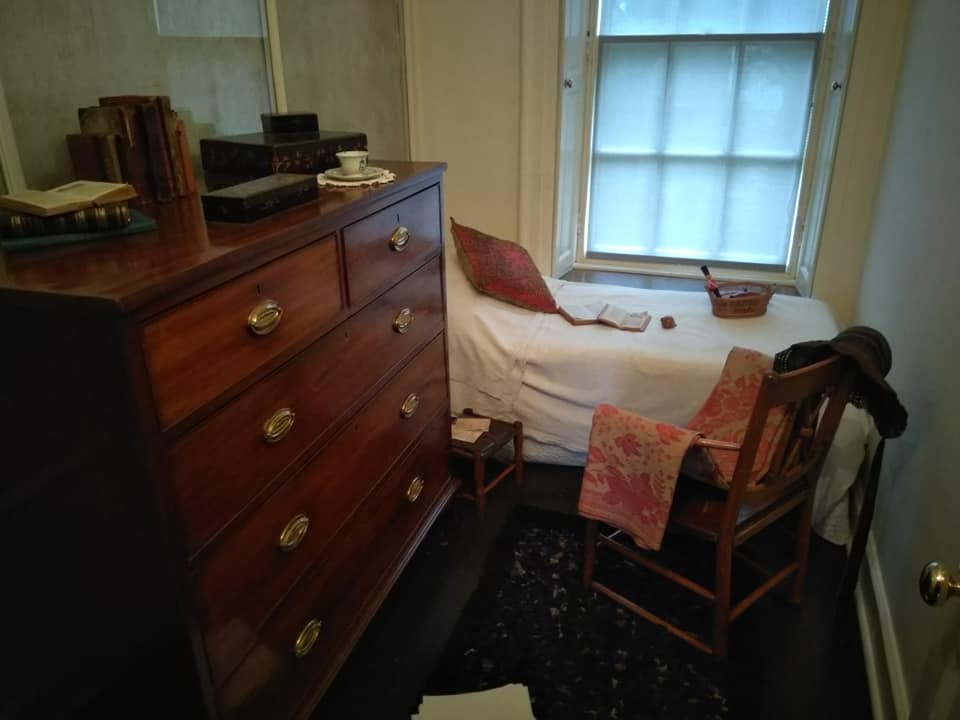 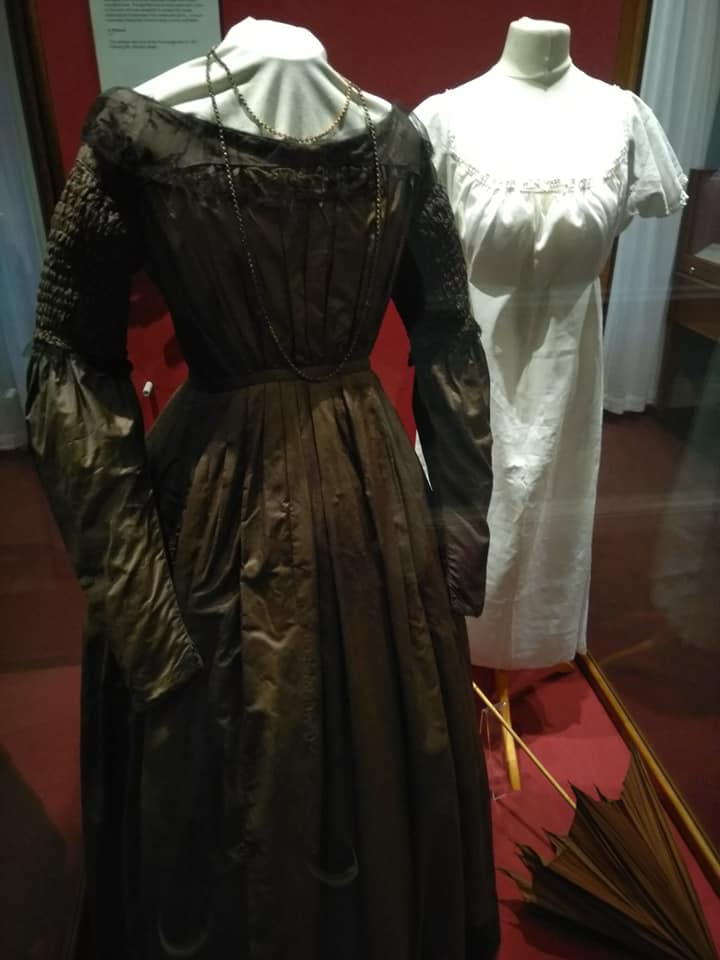 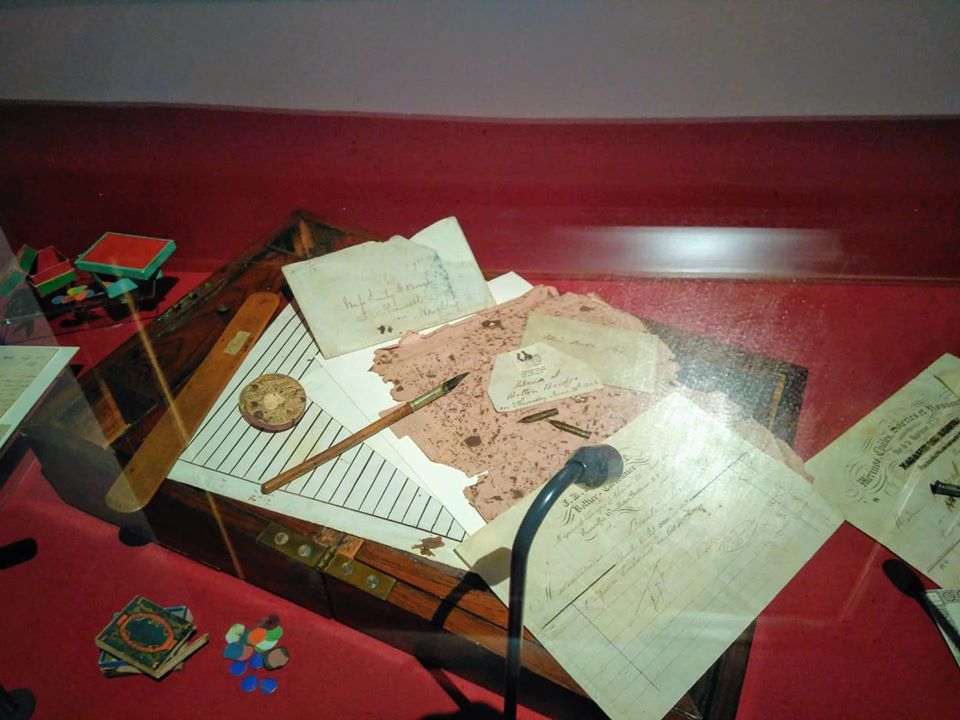 There is lots of information within the museum too about how their novels were received at the time; they got the literary critics talking, and some of the initial reviews can be seen here. I especially liked the one which, in reference to a superstition that if you eat toasted cheese at night you will meet the devil in your sleep, suggested that the author of Wuthering Heights must have been in the habit of having some late-night cheesy snacks!

When you’ve finished in the parsonage, there is plenty to see in the lovely little town of Haworth too; nestled within the moors, there are some beautiful views of the hills as you wander the streets lined with pretty shops and cafes. When I visited it was late November, and the various Christmas fairs had just started up; there also appeared to be a steampunk festival going on in the town that weekend, judging by the number of people (and dogs!) walking around in some fantastic steampunk outfits, so it was absolutely a lively little place. Of course, some of the local business capitalise on the tourist attraction of the Brontë sister’s home; when I saw a pub advertising beers named after each of them, I couldn’t help but stop and have a pint of my favourite, Charlotte, even though I knew it would be overpriced and not a particularly good beer (I was right)! 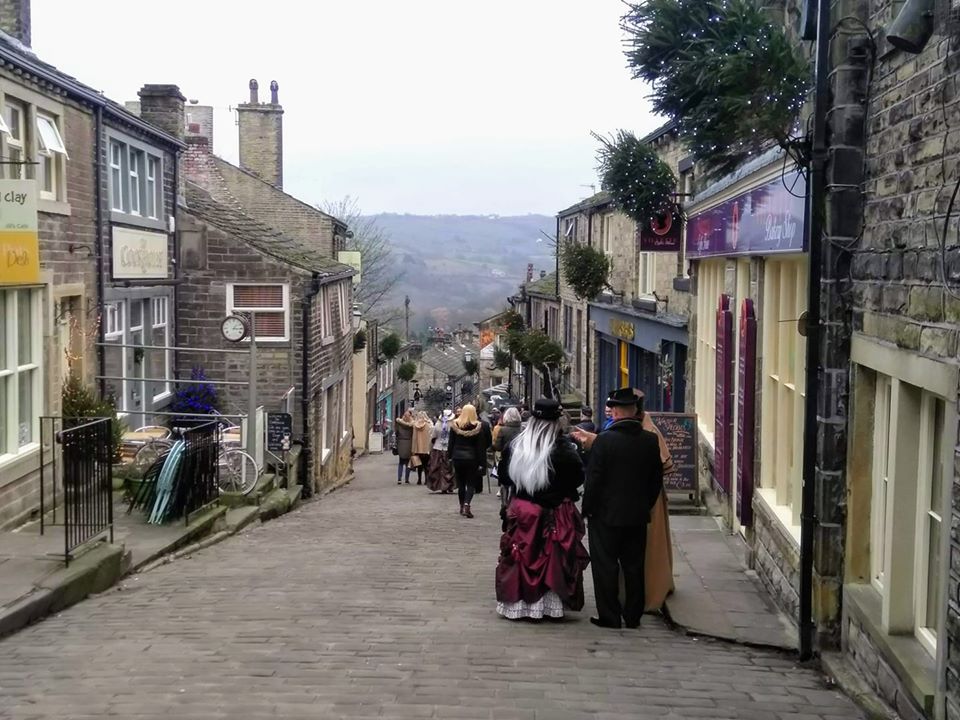 My visit to the Brontë Parsonage Museum in Haworth was a bucket-list item for me, and I was delighted to discover how easy it was to do as a day trip from Leeds. Had I stayed longer living and working in the city, I would have loved to return during the summer, and combine a visit to the museum with some walking in the nearby hills. Leeds is only two hours by train from London’s Kings Cross Station; if you’re a fan of literary historical sites and you find yourself visiting the UK, I would very much recommend making the trip to Yorkshire to see this one. 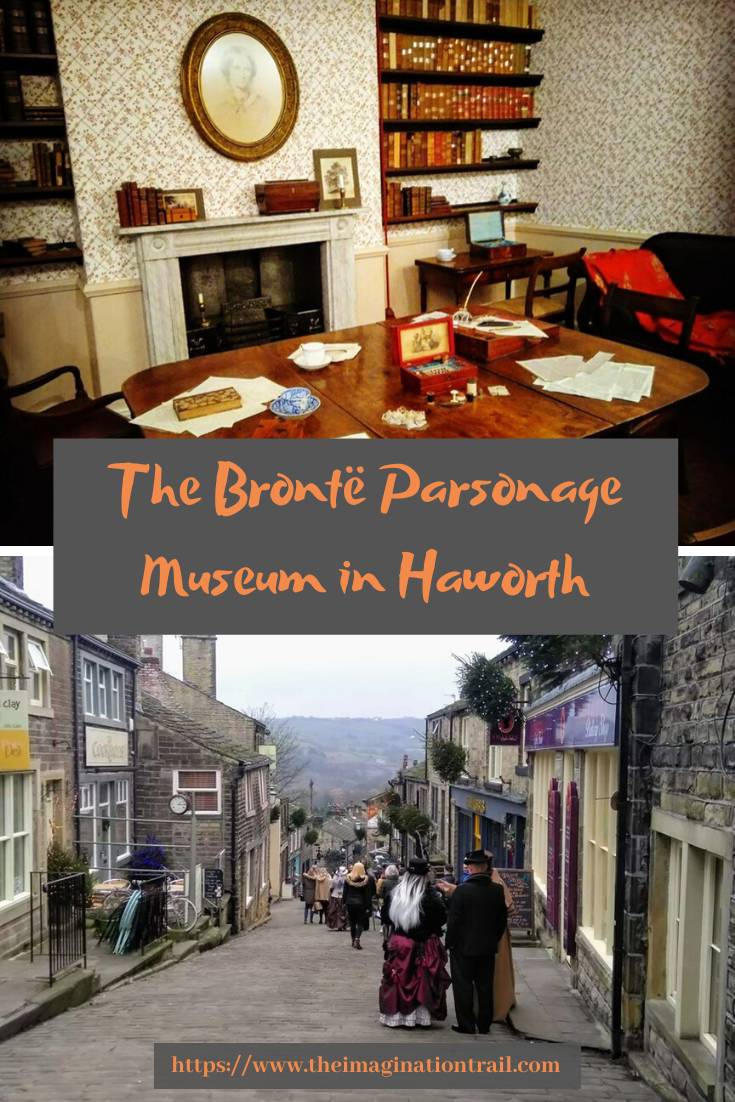