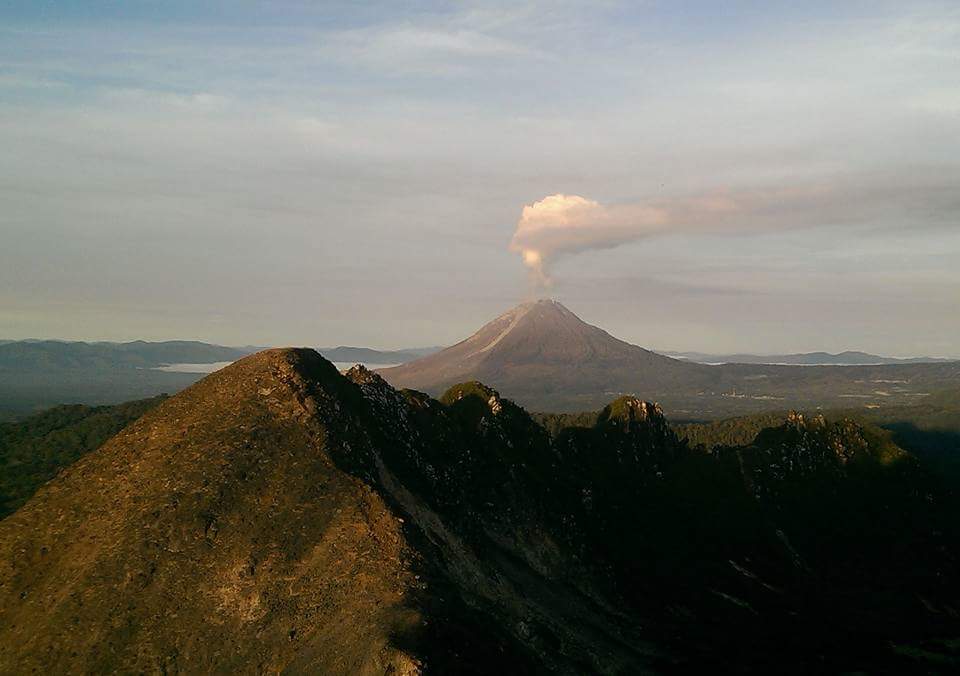 Sometimes a particular volcano will take a hold in my mind for some reason; perhaps because it was or is a significant one, like Mount Vesuvius and its surrounding legacies of Pompeii and Herculaneum, or Krakatoa, which I disappointingly haven’t yet seen due to an earthquake on its slopes on the day I was supposed to visit (that’s the problem with giving your heart to something so volatile as Mother Nature!), or sometimes just because its story interests me, or it pops up on my radar at the right time. Mount Sinabung in Indonesia’s North Sumatra was one of these; just as I was starting to put together my plans for this Asia trip a year or two ago, images of this mountain, which only reawakened after 500 years of dormancy in 2010, appeared in the news. A boy on a bicycle, pedalling down a dirt track with a huge grey mass of pyroclastic cloud – boiling hot ash and rock – filling the landscape behind him. It was terrifying yet fascinating, and Sinabung stuck in my head as something I wanted to see for myself when I made it to Indonesia.

Once I started planning my time in Sumatra, I realised that I wouldn’t be going up Sinabung; with it still spewing out dangerous eruptions every so often, climbing the volcano was strictly off-limits. I decided to head to the nearby town of Berastagi anyway, to see if I could catch a good glimpse of the activity from afar at least. I’d read too that there was another volcano, Mount Sibayak, nearby. Apparently a quiet one, climbing was permitted, and I thought it might be a fun hike and that I might get a good view of Sinabung from the top.

Boarding a “shared taxi” (the transfer vans used by tourists to get between the main attraction points of North Sumatra) in Bukit Lawang, bound for Berastagi, I settled in for the bumpy ride out of town, starting up a conversation with the two travellers sitting in front of me. By the time we’d reached our destination, I was firm friends with Sian and Caroline, and arranged to join them on a pre-sunrise trek up Mount Sibayak the next morning.

By now I knew the drill for these treks – 4am start, piling on all of the layers I could muster from my limited South-East Asian backpacker wardrobe, clamber into a jeep in the dark to be thrown around on the rocky road up to the starting point for the climb. It is never any less exciting each time though – the anticipation of what the sun will reveal when it appears never grows old.

As with previous night-time treks, we climbed by flashlight, with no idea of what lay around us. Unlike the climbs I’ve already done, there was no flickering procession ahead of us on the path; we spotted the odd party above us, but this was considerably more empty a trail than I’d experienced on the more well-known volcanoes, which made our journey feel somewhat intrepid! It wasn’t the toughest climb I’ve done, but it was steep and slippy enough, as we struggled to keep up with our experienced guide who, making this trip nearly every day, was practically galloping up the mountain.

We knew we were nearing the top when the smell of sulphur began to hit us. We could hear something which sounded at first like a stream flowing over rock, but our guide revealed that it was actually the sound of the gases spewing from the volcano. As we reached the crater, it turned into the hissing that you would expect to hear, and as the darkness began to dissipate, we could start to make out the sulphuric fumes spurting fiercely from fumeroles below us. Our guide urged us to hurry so as not to miss the sunrise, and we clambered up to a peak above the crater to catch the spectacle.

As the sky turned pink, it was hard to know what to focus on. Below us, the slopes we’d just conquered, and pockets of billowing gas. To one side, our guide pointed out, the sprawling metropolis of Medan, and to the other, barely visible below cloud, the blue waters of Lake Toba, the world’s largest volcanic crater lake. Behind us, the volcano I’d originally come to see; the volatile Mount Sinabung, looking somehow both peaceful and ominous as a thin white pillar of ash erupted gently from its top. As I’d predicted on the way up, this was a considerably less crowded experience than previous volcano treks; there was no one up there aside from us and a few groups of local visitors. A couple of tents next to the crater suggested that some daring souls had ascended the day before and camped overnight. There can surely be fewer early mornings more perfect than perching on a rock above all of this and eating fresh fruit for breakfast, watching for a bigger eruption from Sinabung, which was, our guide said, entirely possible. A perfectly-positioned rock at the summit led to much silliness

After we’d rested sufficiently, our guide led us down into the crater to explore. As with Mount Bromo, Indonesian Health and Safety appeared to be at best lax, as we clambered over the rocks, inhaling the gas from the fumeroles, sticking our fingers in the boiling water emerging from the vents, and pulling silly poses for photographs in the crater itself. At this point I felt guilty for having viewed Sibayak as merely a “fun hike” and a potential Sinabung-spotting opportunity; it was a magnificent creature in itself which now places highly on my list of top volcano treks. The walk back down Sibayak was a worthwhile experience too; as always with the pre-sunrise treks, you have no idea what scenery surrounds you on the way up, and we were treated to some beautiful views of dense green forest, with the occasional glimpse of Sinabung, which now looked to be upping its erupting a little. After all of that climbing, a dip in the hot springs nearby was a welcome break, although we found that we couldn’t bear to stay in the water for too long! The adventure wasn’t over yet though. Mount Sinabung may have been off-limits, but our guide was willing to take us out as close as we would be permitted, into the abandoned villages a few kilometres from the volcano. The plan was to make this trip that evening, hoping to catch some night-time lava views, but when the afternoon rolled around, so did the rainclouds, and so we made the decision to try again the next morning, heading out just before dawn to try to catch that lava before the sun appeared.

It turned out that we made the right call; the next morning, the weather was dry and clear, and shortly before sunrise we found ourselves perched by the road into the “danger-zone”, peering intently at the volcano, looking for hints of red at the top. It was an eerie experience, standing amongst the houses in which no one is permitted to live nowadays, watching the sun appear over the smoking peak and listening to the growling coming from deep inside the volcano.

Suddenly there was a small but explosive burst of grey from the crater, sending a stream of something rolling down the slopes, and as we spotted the tell-tale glow of orange, we gave a little cheer; finally, here was our lava. Too brief and distant to capture in a photograph, but we saw it all the same. Regular readers may recall that when I fulfilled my dream of seeing an erupting volcano up close at Mount Bromo, I said that the next goal was to see molten lava. Given I didn’t get to see it up close or flowing copiously, I’m counting this one as a half-tick on the lifelong dreams list! Once we’d had our fill of volcano-viewing, we went for a wander around the abandoned villages. The local government moved all residents out of the area within a few kilometres of Sinabung back when it started erupting in 2010. When the mountain is quiet, those who have farms or other work here are allowed to return for the day, but are not permitted to stay overnight; the volcano is volatile and the situation can change quickly (indeed, a local woman going past us on a scooter stopped to talk to our guide, urging him, he told us afterwards, to make sure he took us straight out of the area if activity intensified). At one point, around two kilometres from the mountain, we were only metres away from grey trees, scorched to death by recent pyroclastic flows.

It was a strange experience, walking around the villages, with doors to houses closed and locked up as if the owners were merely on holiday, trolleys sitting outside the hospital, and cigarette advertisements still hanging, raggedly, from shop fronts. The government, our guide told us, had moved the residents to Berastagi. I presumed that they had been re-housed, but on the way back into the town, he slowed down outside a community hall and pointed through the open doors to a collection of sleeping mats on the floor.

“That’s where the people from the villages live now.”

Some of the people forced to leave their homes because of Mount Sinabung’s eruptions had been sleeping on a floor in a communal hall for years. This was a sobering realisation for me, something I’ve always known of course, but not yet really been faced with; that the thing which is my passion, my lifelong obsession, one of my main motivations for seeing the world, takes and ruins so many human lives. I’m playing in and around volcanoes whilst other people have lost everything because of that same mountain. Part of my interest is because of how terrifying and destructive they are, but it’s still something I need to remember when I’m dancing around on top of volcanic peaks, posing for photographs. One of the abandoned villages in the shadow of the volcano

Sinabung remained fairly quiet whilst we were watching, but it had one last surprise for us as the three of us were leaving Berastagi, headed for the relaxing shores of Lake Toba, later that day. As we were driving out of town, Sian spotted something; a billowing grey mass of ash and steam appearing above the clouds. I knew that this was going to be my last active volcano for a little while, as I had other countries to see and other things to do outside of the Ring of Fire. I don’t know whether Sinabung was teasing me, or waving me goodbye.