Close encounters: in search of orangutans in Bukit Lawang 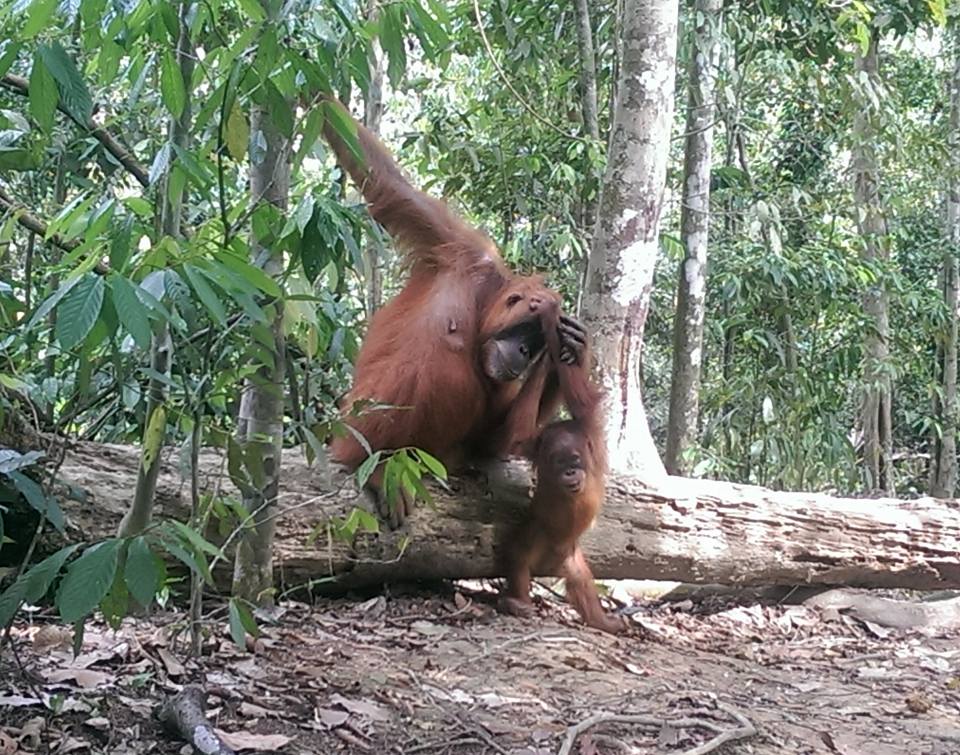 I’ve always wanted to see the orangutans in Borneo (and still plan to, later on this year!), so when I discovered that I could potentially see them in Sumatra, Indonesia, too, it became one of my must-dos for my time here.

I flew from Jakarta into Medan – a city which is an inescapable evil for anyone coming this way as it is the gateway to the whole region of North Sumatra. My experience of the place may be limited but I’m afraid that the only positive thing that I can say about it is about the guesthouse in which I stayed – K77 Guest House. The rooms are cosy, the breakfast is amazing and the couple who run it are wonderful people – when I stayed there again, on my way out of Sumatra, I was sick, and Lola made me little plates of gentle food to help. If you have to stop off in Medan, I can’t recommend this guesthouse enough.

The next day I was on my way to Bukit Lawang, in a “shared taxi” (small van) arranged for me by K77. The city appeared to stretch on forever, as we sat in queue after queue of traffic, scooters weaving their way through the lines of cars sounding their horns seemingly at random, dodging the people wandering up and down selling water, snacks and newspapers, until fairly suddenly the shopfronts and restaurants gave way to palms, and the potholes began to appear in the road. It was a bumpy but beautiful ride into Bukit Lawang, past seemingly neverending forest, through villages and into the hills.

Upon arriving, I was met by someone from Junia Guesthouse, the lovely little place where I was staying, whisked onto the back of a motorbike, and zoomed down to the river, which we then had to cross using a ricket-y rope bridge with missing slats, the kind I’d only ever seen in adventure movies and certainly never encountered myself! Bukit Lawang sits on the edge of the Gunung Leuser National Park, a massive area of jungle and rainforest, and when I’d navigated the bridge and finally took some time to look around, I could see that I really was in the jungle; guesthouses (including mine) and brightly coloured shacks lined a thin, brown river flowing beneath the aforementioned Indiana Jones-esque bridge, with a wall of green rising above the scene as the village gave way to the rainforest. It was unlike any landscape I’d encountered so far, and a welcome contrast to the uninspiring cities in which I’d spent my recent days. The next day it was time to explore that jungle, and hopefully spot some of the animals I’d come to see; the orangutans. There is an orangutan rehabilitation centre in Bukit Lawang, where animals rescued from captivity are prepared for life in the wild, before being released into the Gunung Leuser National Park. There are various treks of differing lengths on offer, led by local guides. The two-day trip with overnight camping in the rainforest is a popular option, but as I was short on time I had to choose the one-day trek, which my guesthouse arranged for me.

We began with a steep climb up into the trees, and it wasn’t long before we spotted gibbons and monkeys. Our guide stopped every so often, listening, and scanning the foliage above our heads, looking out for animal sightings for us. The air was thick with the sounds of birds and cicadas and the village already seemed far behind us; I felt like an old explorer, out in the jungle looking for big beasts!

Following his finger, we were greeted with the sight of a huge, orange creature sitting comfortably in a tree top, slowly pulling leaves off the branches, and giving us a nonchalant look before hauling itself up and swinging onwards to the next tree; an orangutan, the animal we’d come to see, and such a majestic one. Our guide meanwhile had spotted a small group of tourists nearby standing around looking at something, and beckoned us over. The spectacle turned out to be a massive, beautiful female orangutan, and her unbearably cute baby, lolling around on a tree trunk on the ground. We all watched and took our photographs in silent awe, as the baby tested out its arms which looked far too long for it, with the mother picking it up whenever it got into a muddle! We were able to venture fairly near; the mother appeared unfazed by our presence. Thrilled to have seen the orangutans at such close quarters, we continued our trek deeper into the jungle, spotting many more monkeys along the way. About 90 minutes later, one of the other guests in our group gave a yell. We turned to see that a female orangutan, baby on her back, had dropped down, silently from the trees, grabbed his arm and was trying to get her teeth to his flesh. The guide immediately jumped into action, shouting at the creature while the guy managed to free himself, then telling us to climb while he fended her off. A few minutes later he caught up with us, telling us to keep going; looking back, I saw the orangutan was still attempting to follow us.

Once he deemed we’d lost her, the guide allowed us to stop to catch our breath. Something had dawned on me.

“Was that the same mother and baby that we just saw?”

“Yes,” nodded the guide. “That is Mina. She has attacked many guides and tourists this year already. We don’t know why.”

I was stunned by his casual tone. The guy who’d been attacked was unharmed, but understandably shaken up. I couldn’t help but feel annoyed that this particular animal was known to the guides as being aggressive, and yet they’d said nothing and let us get so close to her and her baby. It was a sobering reminder that these are wild animals. It didn’t spoil my enjoyment of the trek and I would go again, but next time I would definitely keep more of a distance, especially when mothers and babies are involved.

I left the jungle feeling privileged to have witnessed such beautiful creatures in their natural habitat. It also made me more conscious of the issues around deforestation and palm oil in Indonesia, which are putting the orangutans at risk, of which I knew embarrassingly little previously. I would love to return to the Sumatran jungle one day for a longer trek…but for now, I’ve ticked one more item off the bucket list. The wildlife at my guesthouse