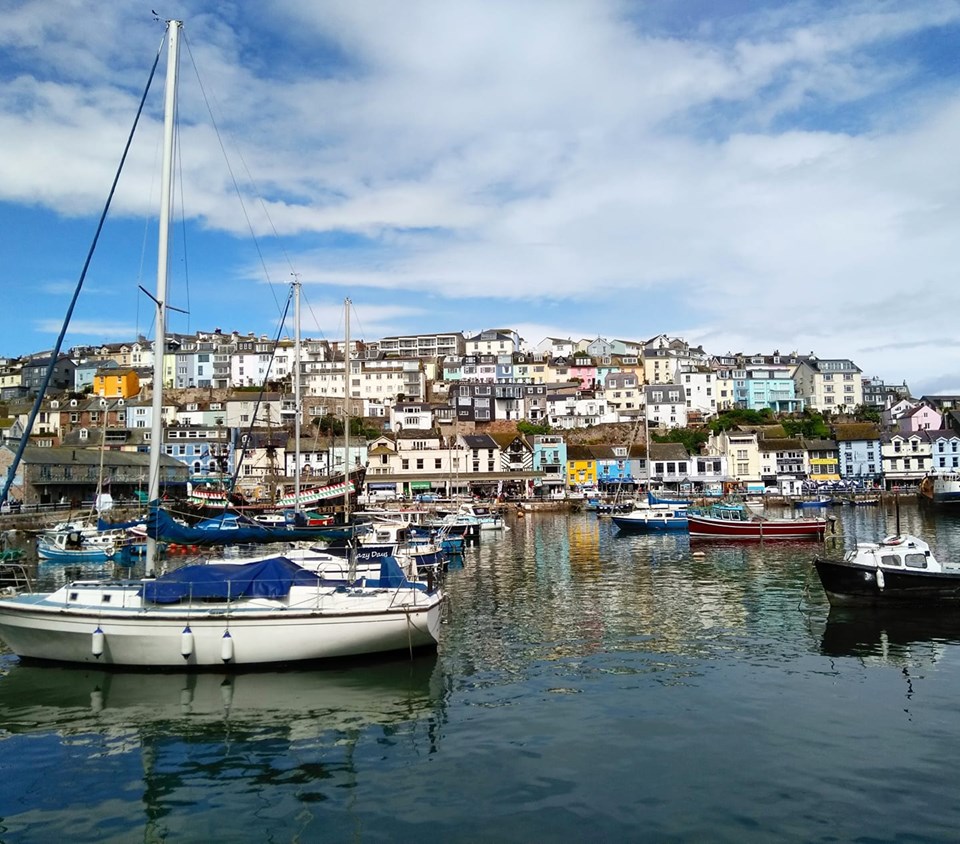 When I was staying in Bukit Lawang I made friends with an Indonesian woman around my age who was staying in the room next door to mine. Originally from nearby Medan, she had just left her job in Jakarta and was taking some time to re-visit some of the spots that she and her family had holidayed in when she was young. It was one of those occasions which really brings home how similar, deep down, we humans are, wherever we hail from; her fond childhood memories were of jungle and orangutans, and mine were of sandcastles and ice cream, but we shared the same sense of nostalgia for those playful days.

When I was a kid, before I’d had the chance to see anywhere outside of the UK, if you’d asked me where my favourite place in the world was, I would have told you that it was Brixham, a small fishing village in Devon, along the south coast of England. Ever since I was little I have always been drawn to the sea, and Brixham, with its tiny harbour full of vessels and sails, and its hills of brightly-painted houses, was completely enchanting to me (and so very different to the urban sprawl of Birmingham, England’s second city, where I was growing up). We used to stay in a Pontins holiday camp nearby, but merely use it as a base, heading out every day to explore the towns and villages all along the English Riviera; Torquay, Paignton, Goodrington. I very briefly revisited Paignton a few years ago with a friend, but we didn’t have time to make a trip to Brixham, so during the early part of summer this year, my first summer back in the UK in quite some time, I decided to go and spend a weekend down there.

There’s not much by way of hostels in Devon – just a couple of YHA properties dotted about in spots which looked tricky to reach without a car – so I decided to base myself in Torquay, which was easily accessible on a direct train line from London (with some of the best views on a railway route in the country), and where guesthouse prices were more favourable. If you’re visiting England, this is the area to experience a stay in a traditional British Bed and Breakfast. Torquay itself is a pleasant place to spend an afternoon; there’s a marina, a beach, and some cliffside views out over the sea. 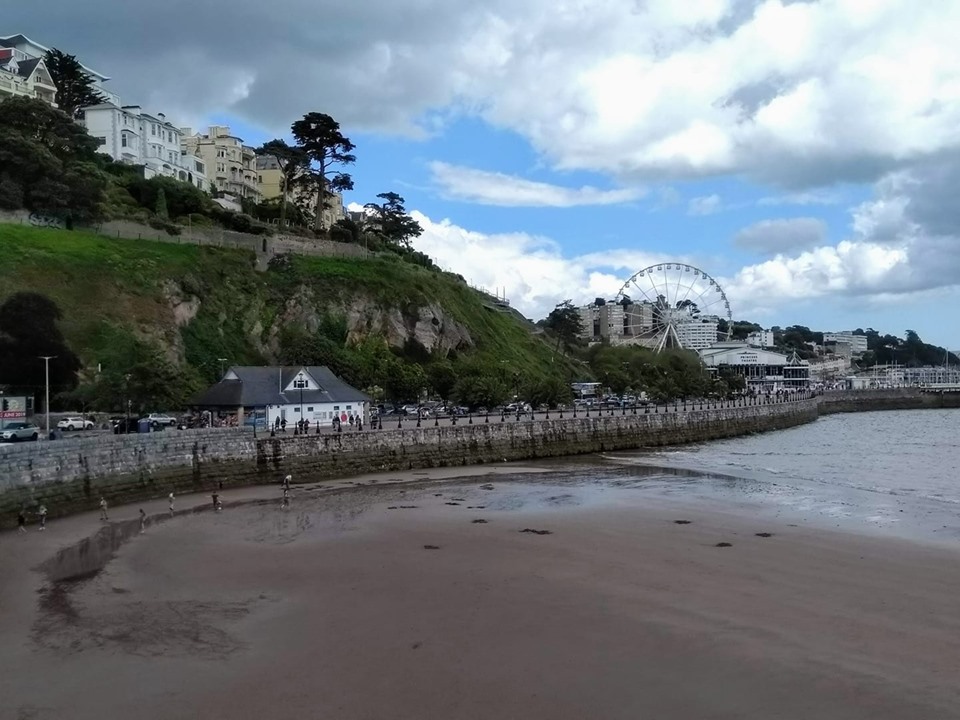 If you don’t have a car, then the number 12 bus runs regularly every day from Torquay along the coast to Paignton (definitely worth a stop if you’re visiting the English Riviera for the first time; it’s a lovely seaside resort town where from the beach you can watch the beautiful local steam train go chugging past every so often) and then on to Brixham, where it terminates, taking about half an hour to complete the trip.

It was only a short walk down to the harbour from the bus stop. Miraculously, the torrential rain which had begun to fall as I boarded the bus had already totally cleared, and the morning sun sat over the boats on the water, just as I had remembered Brixham from my childhood. As I walked around the marina, away from the town, the pink and blue and yellow houses blanketing the hills behind came into view. A lot of the shops and cafes looked different, and the Golden Hind Museum Ship, a full-size replica of the galleon on which Sir Francis Drake circumnavigated the world in the sixteenth century, looked somehow smaller than it had done when I was a child exploring it, but Brixham felt mostly unchanged; it definitely still had the exact same charm that had captured me so many years ago. 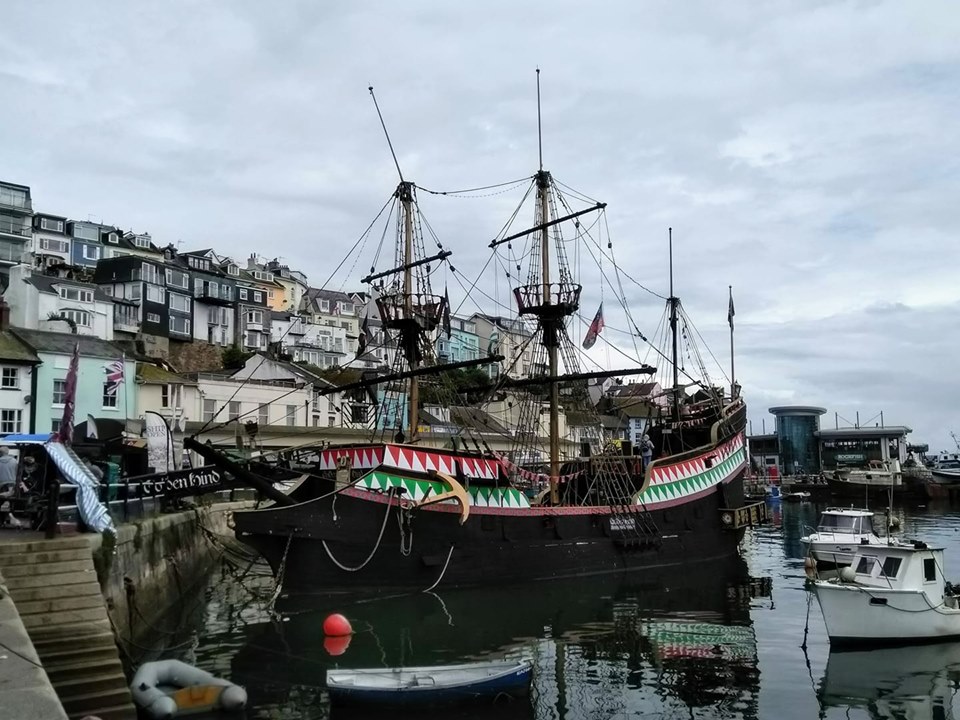 Brixham has a fair bit of history attached to it; as described in various plaques around the harbour, several local fishing vessels left from here and the other nearby coastal towns to help with the evacuation at Dunkirk in World War Two. This part of the coast has always been a potential entrance to England for anyone seeking to invade and occupy, long before the War; a statue of William of Orange stands in the harbour (usually with a seagull on his head!), marking the fact that Brixham was where he landed in 1688 when he arrived to overthrow King James. 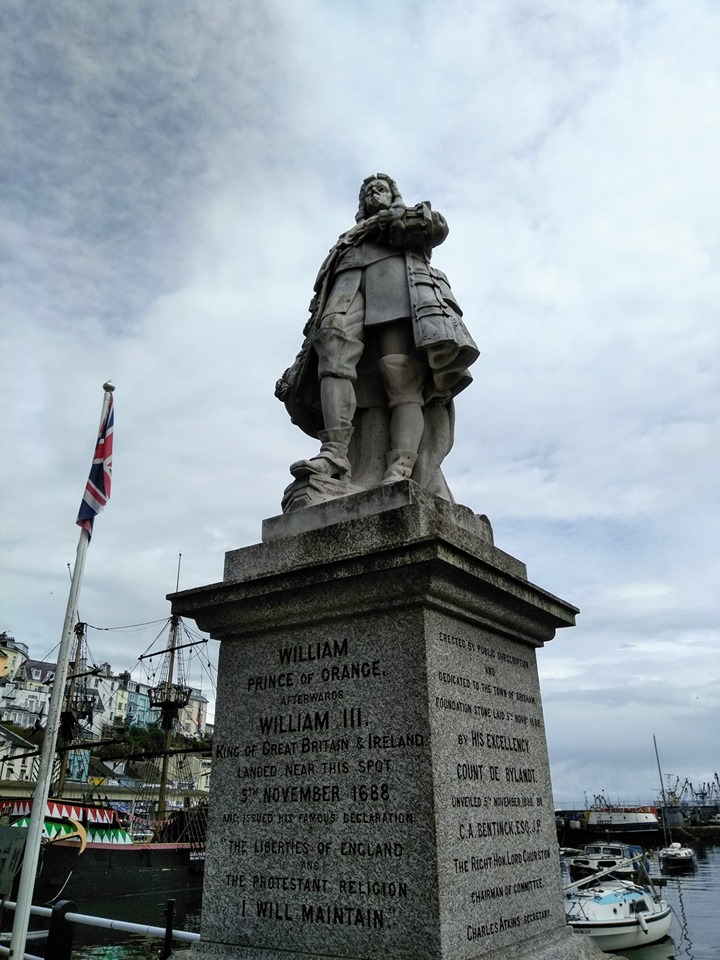 Possibly the only photo I or any of my family have ever taken of this statue where there’s no seagull on his head!

After soaking up the harbourside for a while, I carried on walking, following the signs to Berry Head, a coastal headland that I also seemed to remember from childhood holidays. With sea on three sides, it was windy out on the cliffs, but the views were spectacular. Berry Head is also a nature reserve, and whilst I looked keenly for dolphins out in the sea, sadly I didn’t spot any. 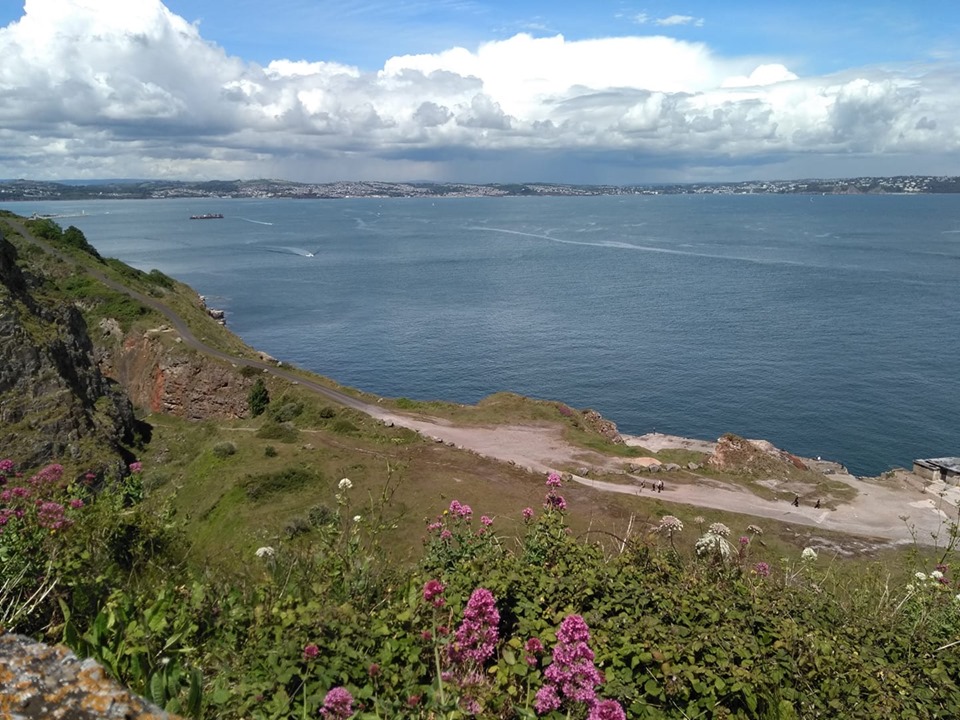 Walking back down to Brixham, I found the breakwater, where there is a small pebbly beach which we would also visit on our family trips; here I had nicknamed one of the tiny stony coves “Mermaid Cove” (I was obsessed with mermaids; still am, if I’m honest!). I couldn’t identify exactly where it had been – of course, the forces of the tide and the wind had probably completely rearranged the rocks since those days – but judging by the number of children paddling and looking for water creatures with brightly-coloured fishing nets, this little part of the town was continuing to capture young imaginations. 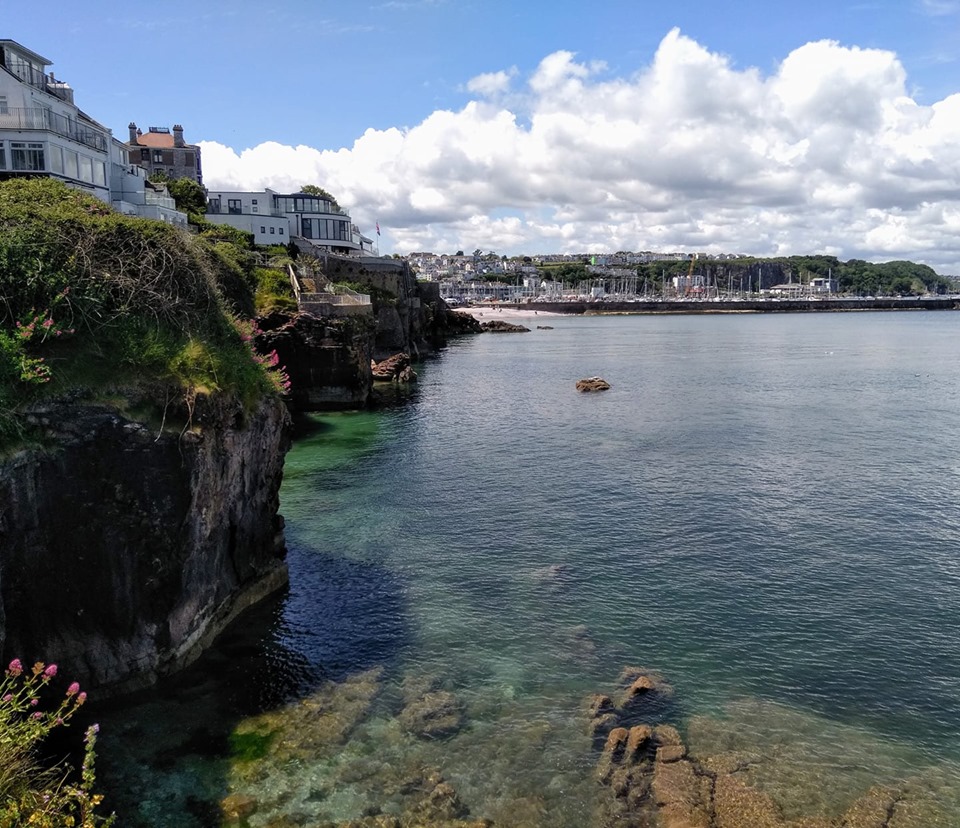 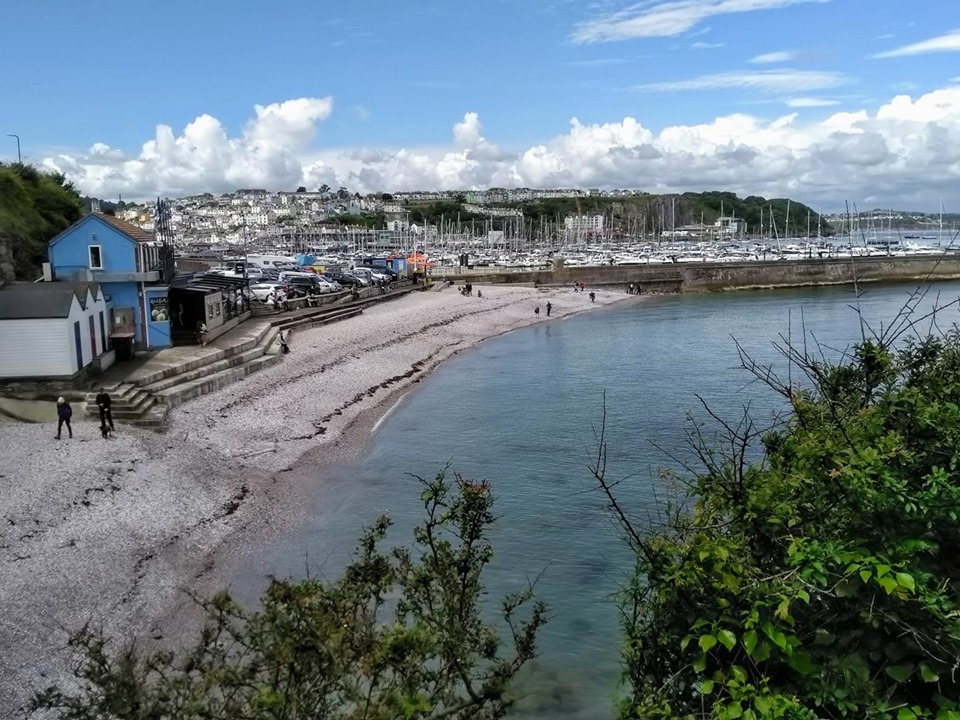 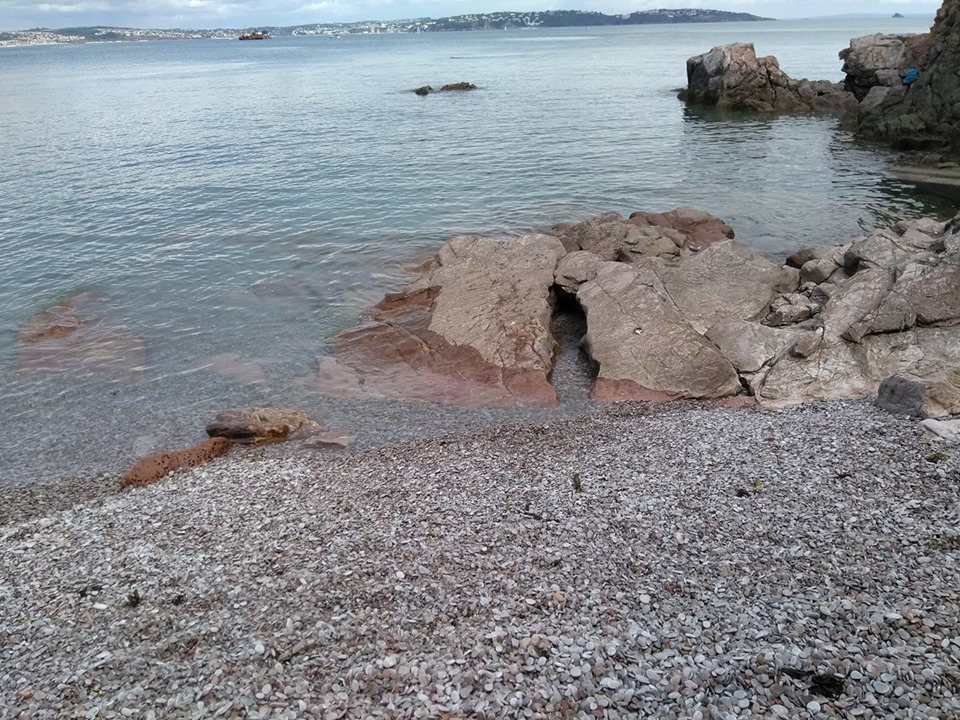 Possibly not my “Mermaid Cove””, but something very similar!

After refuelling with a portion of fat, vinegary seaside chips, enjoyed sitting on the steps of the breakwater, I headed off in the other direction, deciding, as it had so unexpectedly turned into a glorious sunny day, to walk a portion of the South West Coast Path back towards Torquay. This turned out to be a stunning route, with beautiful views from the cliffside, and paths to scramble down to hidden bays where turquoise water lapped at the sand; it was a coastal path to rival some of those that I explored in Australia. I even spotted a seal! 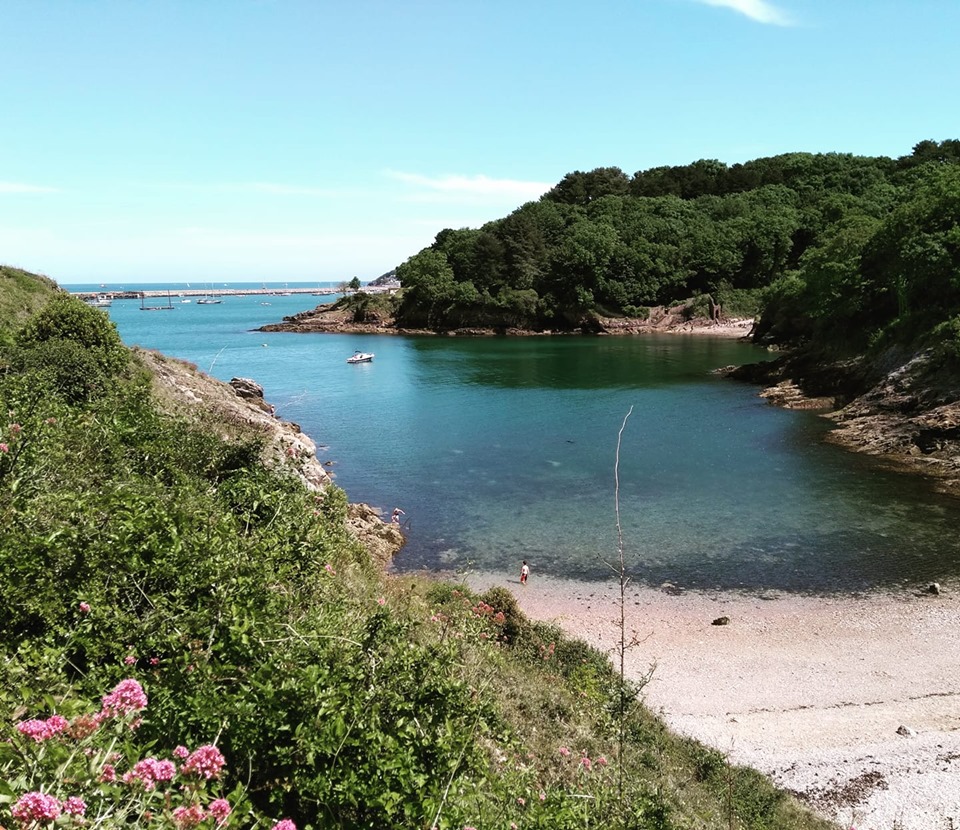 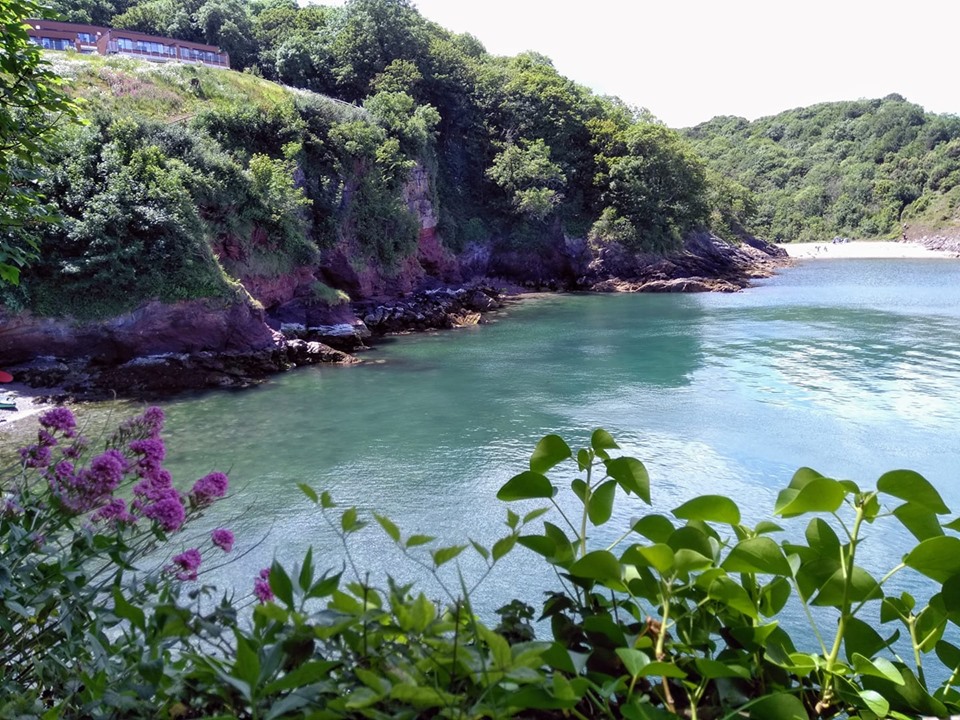 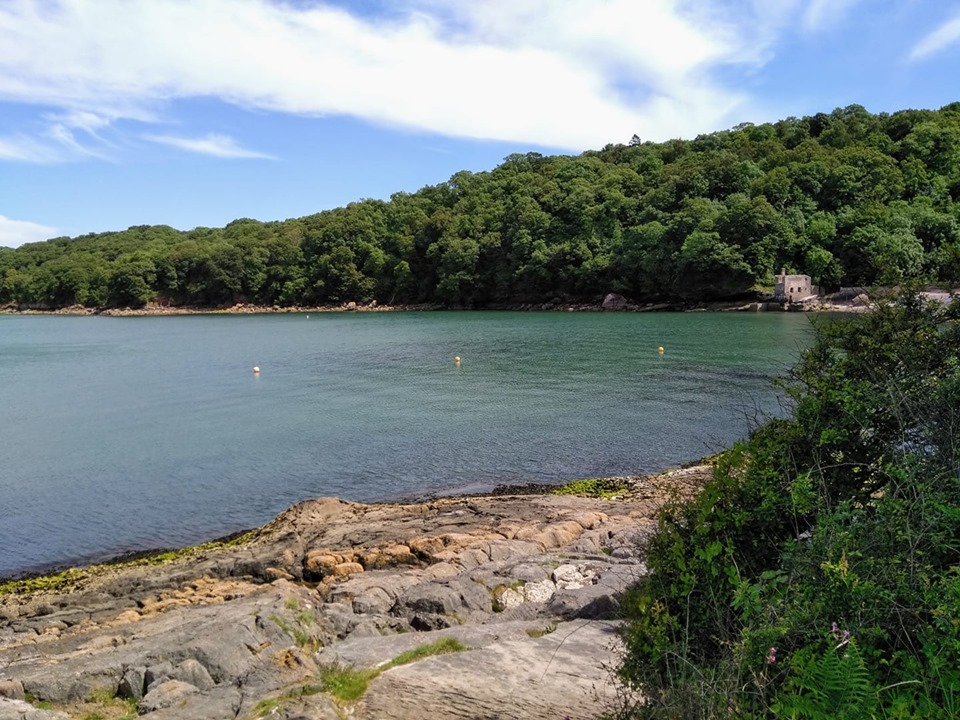 Eventually another sight from years ago came into view; off in the distance, the beach huts of Broadsands, a sandy beach that I recall featured regularly in our family trips. 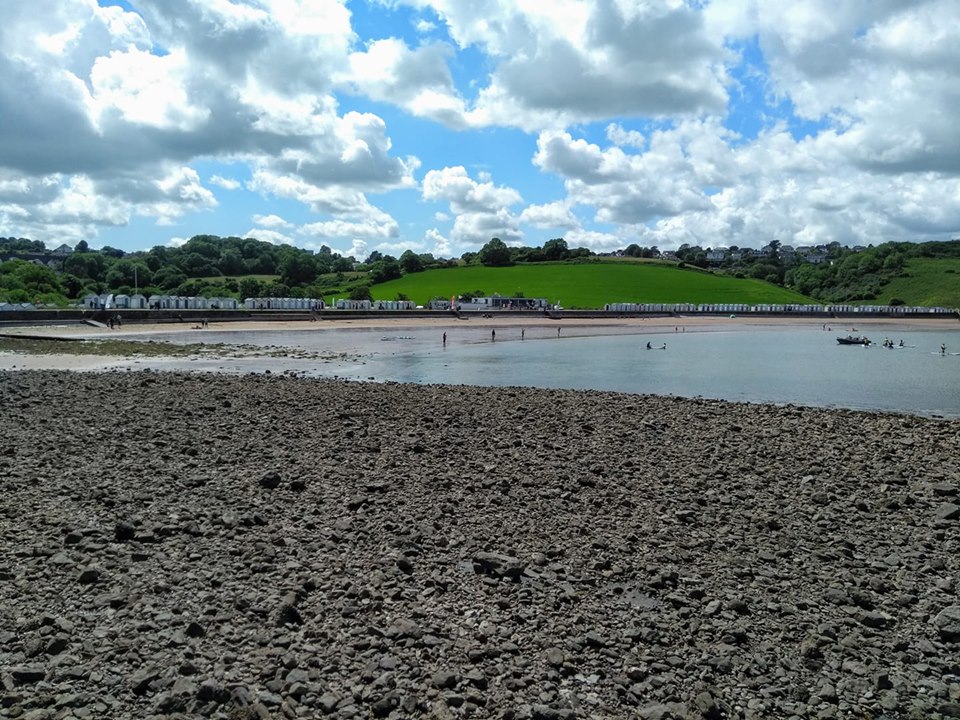 I was even able to enjoy an ice cream by the sea, as the kiosk stocked vegan Magnums!

By this time the clouds were starting to roll back in, and the sky was turning a slightly ominous grey, so I decided to call it a day and head back up to the main road to hop on the bus the rest of the way back to Torquay. I had been extremely lucky with the weather, just as we so often had been on our family holidays! 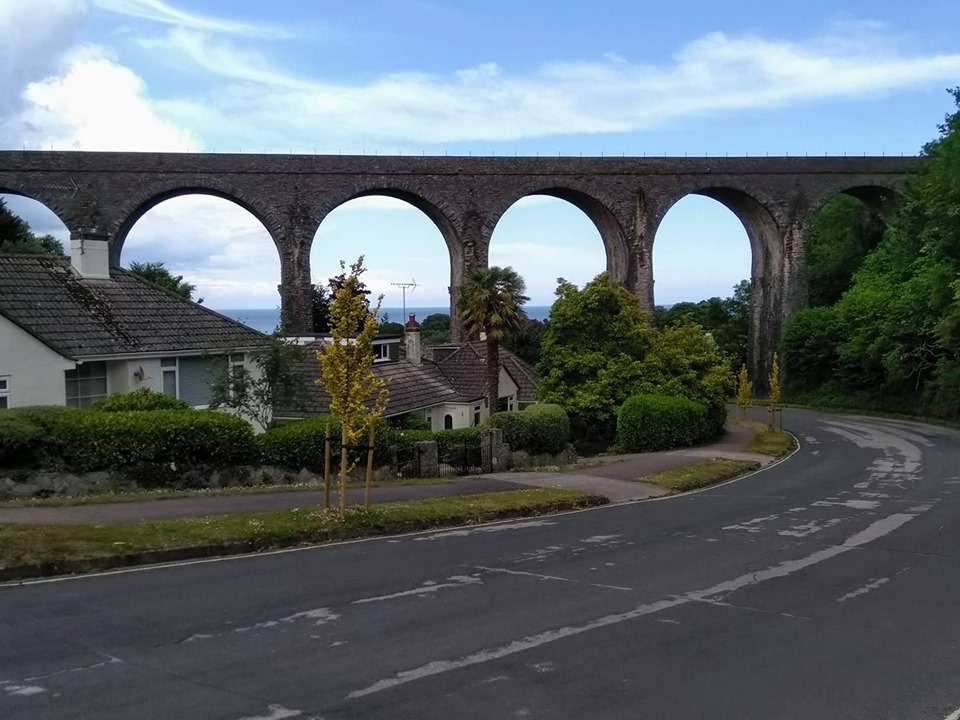 I was glad to see that Brixham still held all of the charm for me that it had when I was a child. Nearly thirty countries across four continents later, and I’d say it is probably still up there in my top ten favourite spots. It offered the perfect weekend break from the hectic everyday life of London, and I would highly recommend adding Brixham and its surrounds to any England itinerary. 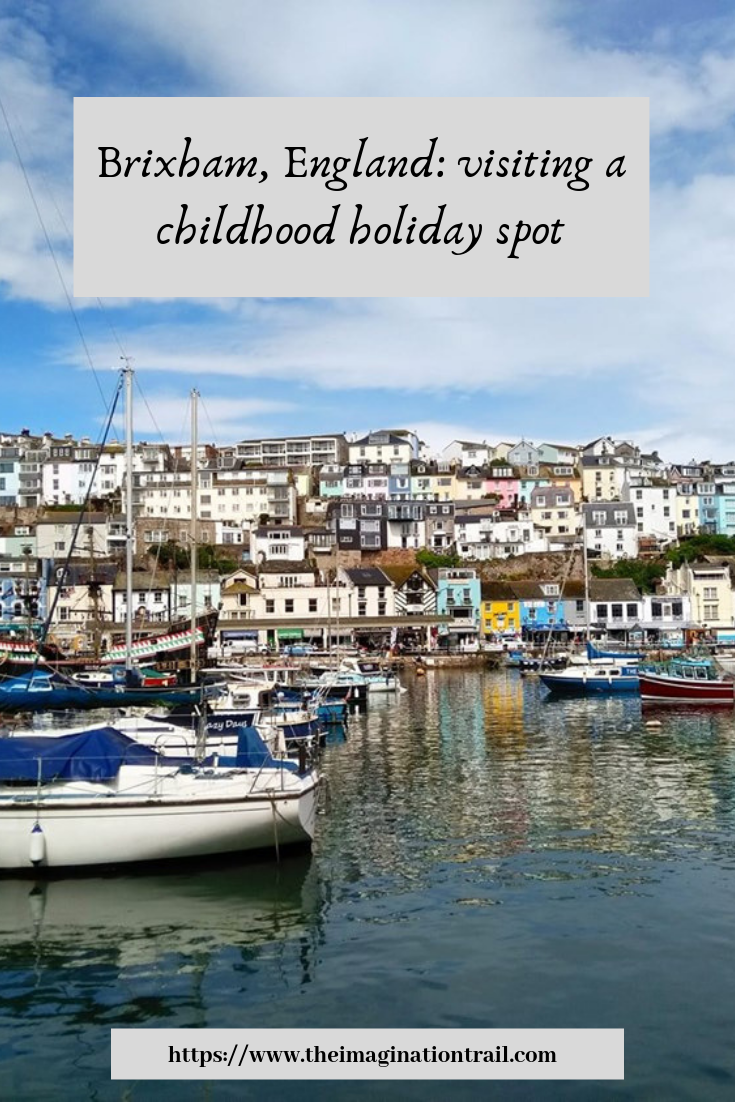