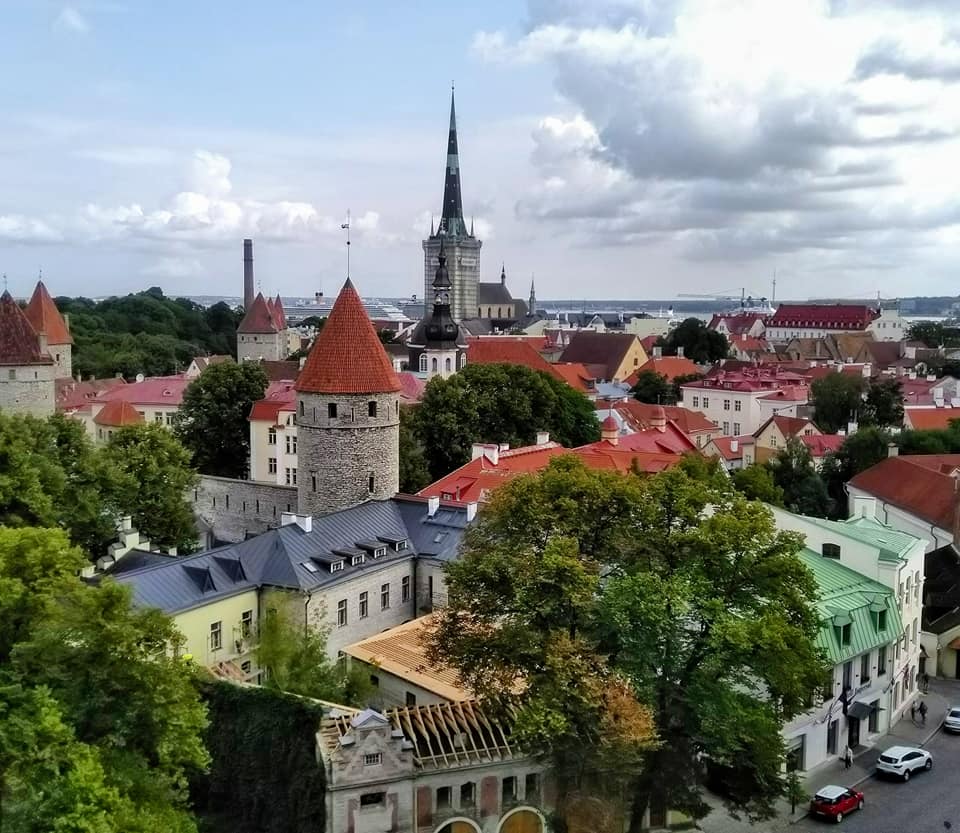 Tallinn is another one of those places that I have always wanted to visit, ever since studying the history of the USSR and communist rule in Europe at school, so, after ticking Krakow and Albania off my bucket list this year, I decided that this should be the next item. The photographs that I had seen of the medieval Old Town looked stunning, and I was keen to see the evidence of Soviet influence in the city too.

I arrived late in the evening and checked into a private room at United Backpackers, a medium-sized hostel with a comfy bed, helpful and friendly staff, a nice little kitchen, clean bathrooms, and free coffee in the mornings, conveniently located just ten minutes’ walk away from the heart of the Old Town.

The next morning I kicked off my exploration of Tallinn with my usual first-day activity, a free walking tour of the Old Town. While Tallinn has other districts to see too, the Old Town is rightfully a focal point of any trip to Estonia’s capital, and so it’s probably the best place to start. Its medieval roots are still clear today in the beautifully-preserved city walls and gates, castle, churches, town square and cobbled streets, which earned it UNESCO World Heritage status in 1997. 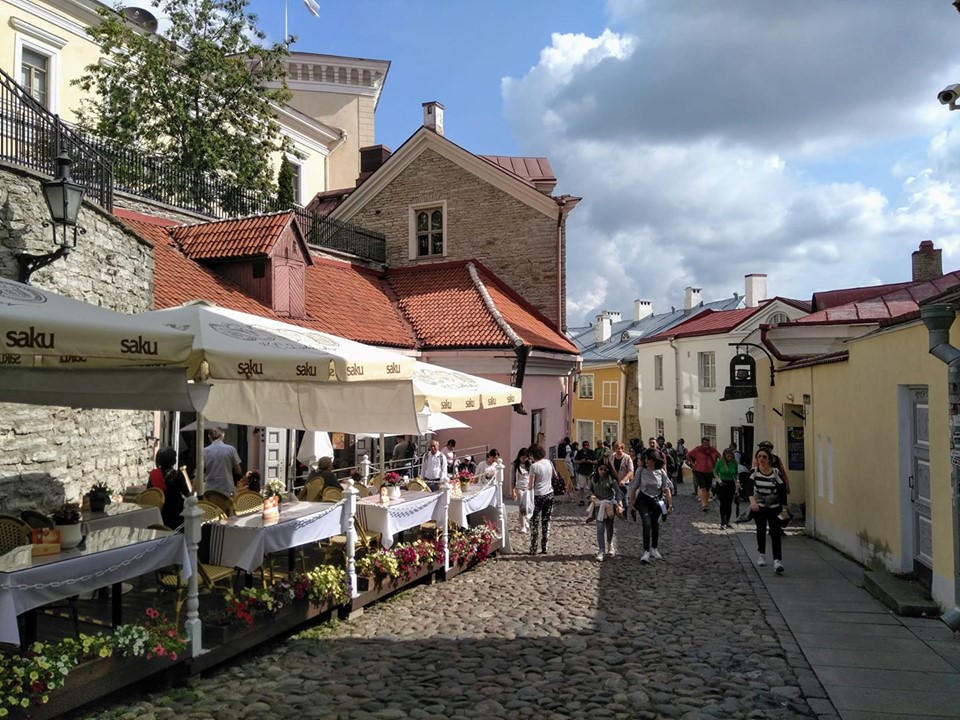 During the summer months multiple tours run every day, and they are very popular; Mia did a fantastic job of managing about sixty or seventy people who turned up for the tour I took! Over the course of two hours we navigated the narrow streets whilst Mia told us various stories from the very long and varied history of the city, from old to new; from Old Thomas, the cute little figure which has sat as a weather vane atop the Gothic Town Hall since 1530 to commemorate a peasant boy who became a local hero for his archery skills, and is believed to stand guard over Tallinn (he was hit by German bombs in 1944 but quickly reconstructed and put back), and the fifteenth century “Kiek in de Kök” artillery tower, so named because soldiers would apparently “peek in the kitchens” of the Old Town from their lookout, to the Hotel Viru, where the KGB had a listening office on the officially non-existent 23rd floor (more on this later), to the monument to Estonian independence in Vabaduse väljak – Freedom Square (which apparently no one likes very much because it’s not particularly aesthetically pleasing and costs taxpayers’ money for its upkeep!). 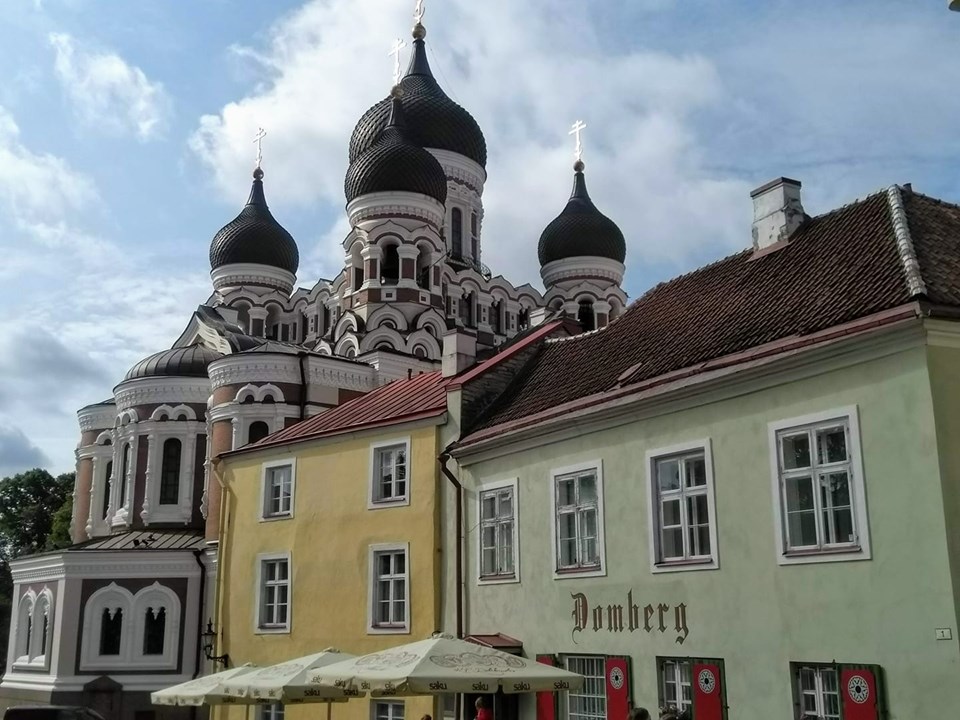 Alexander Nevsky Cathedral, a Russian Orthodox church in the city 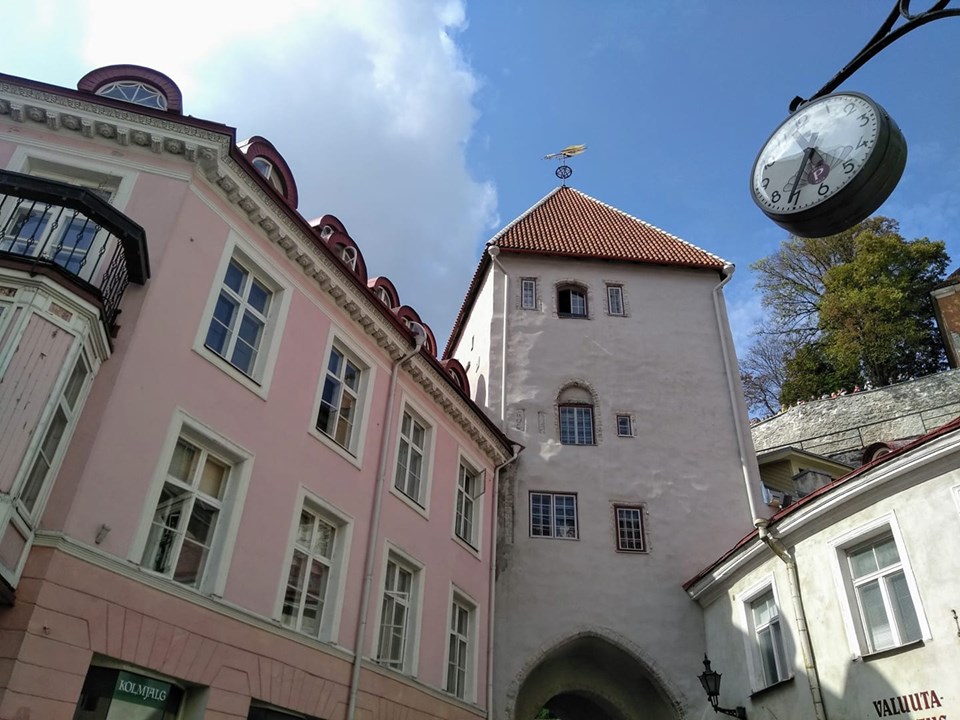 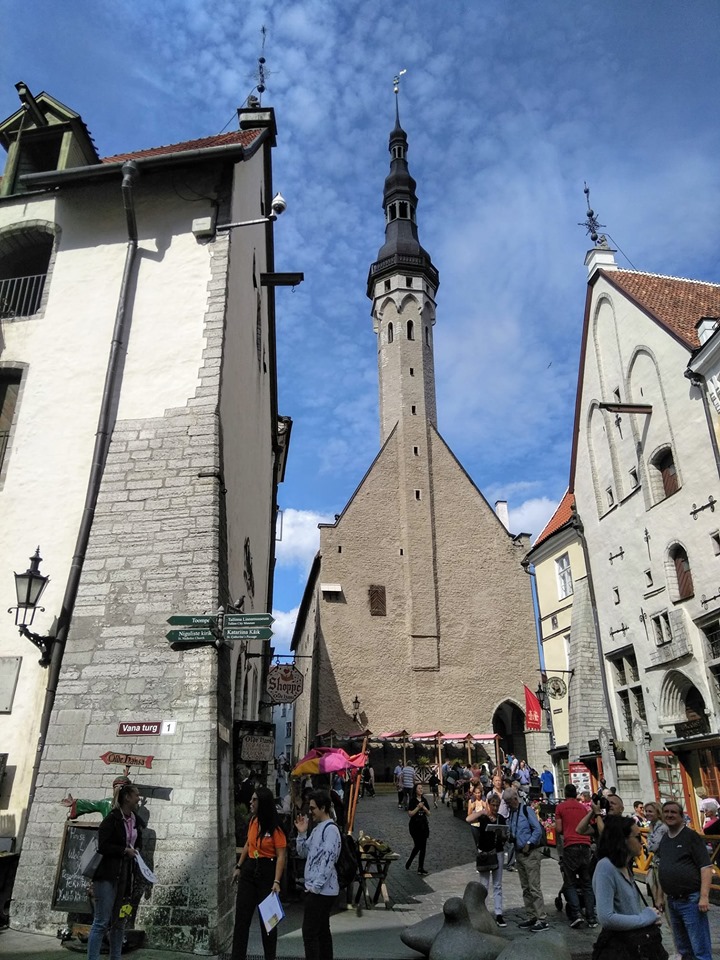 The gothic town hall – look closely to see Old Thomas on the spire, watching over the city 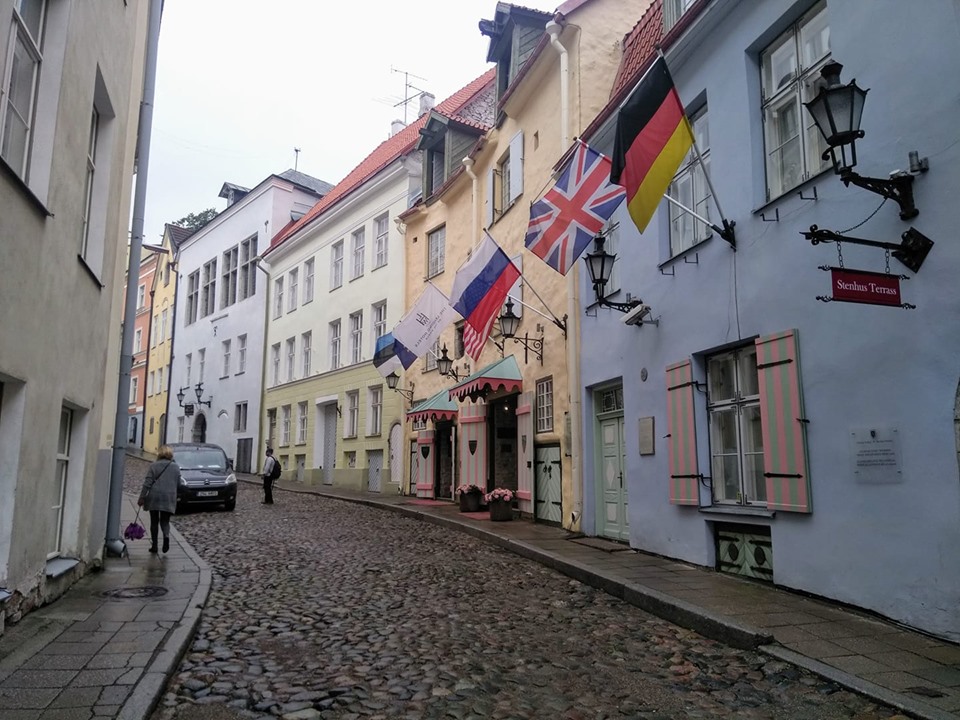 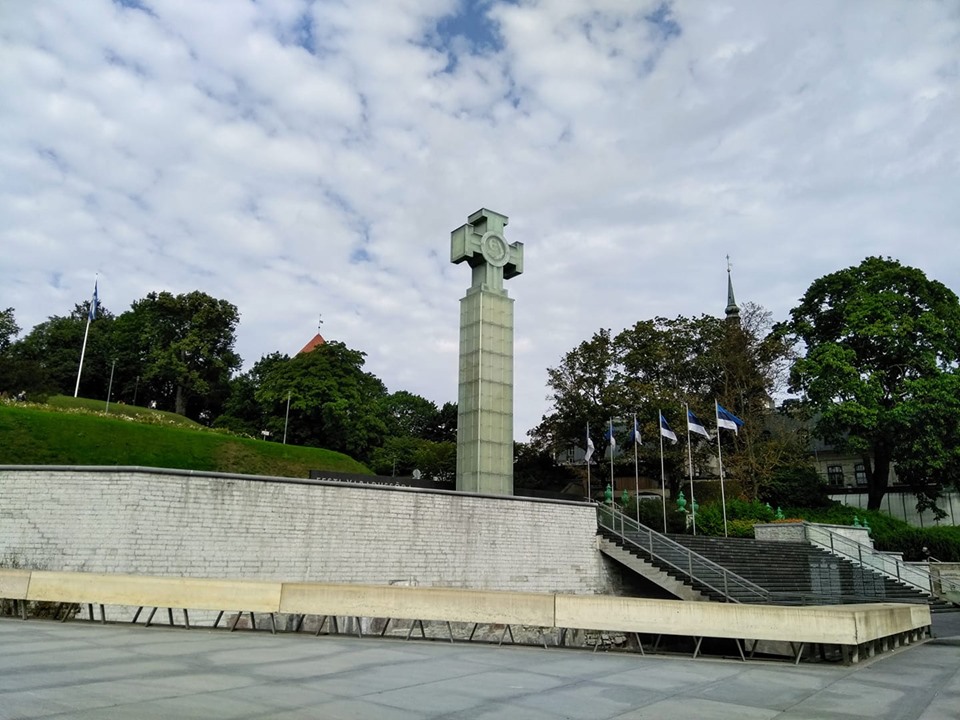 There are a couple of viewing platforms around Toompea Hill for those famous shots looking down into the streets of the Old Town. These vantage points were busy every time I visited, but definitely worth pushing through the crowds for, both during the day and later on, at sunset. From here it’s really clear to see the mixture of medieval and Soviet architecture spread around this central part of the city. 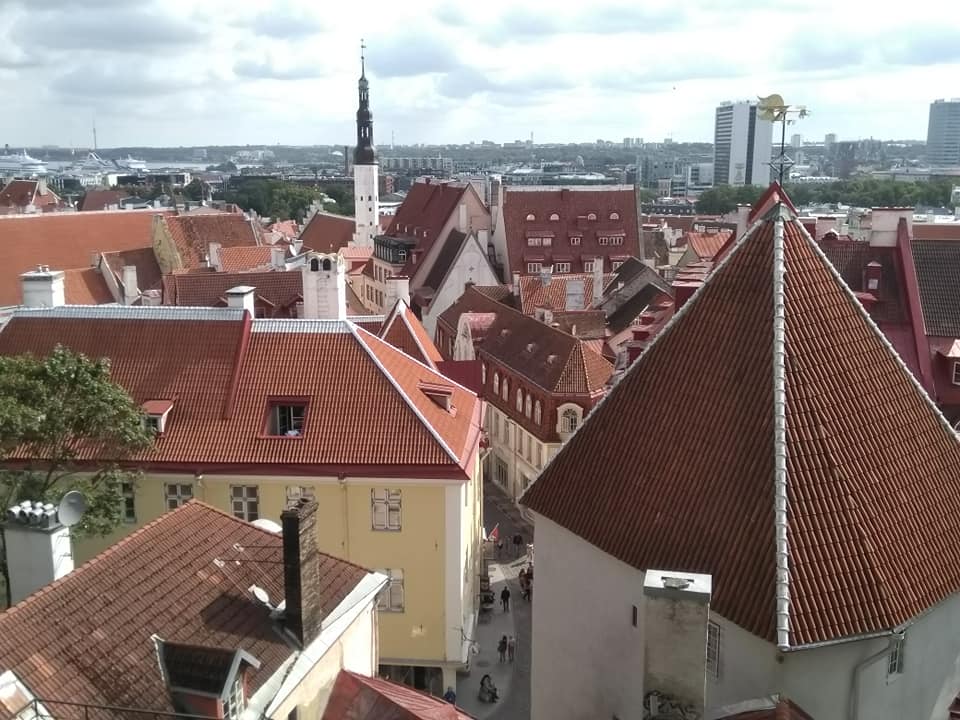 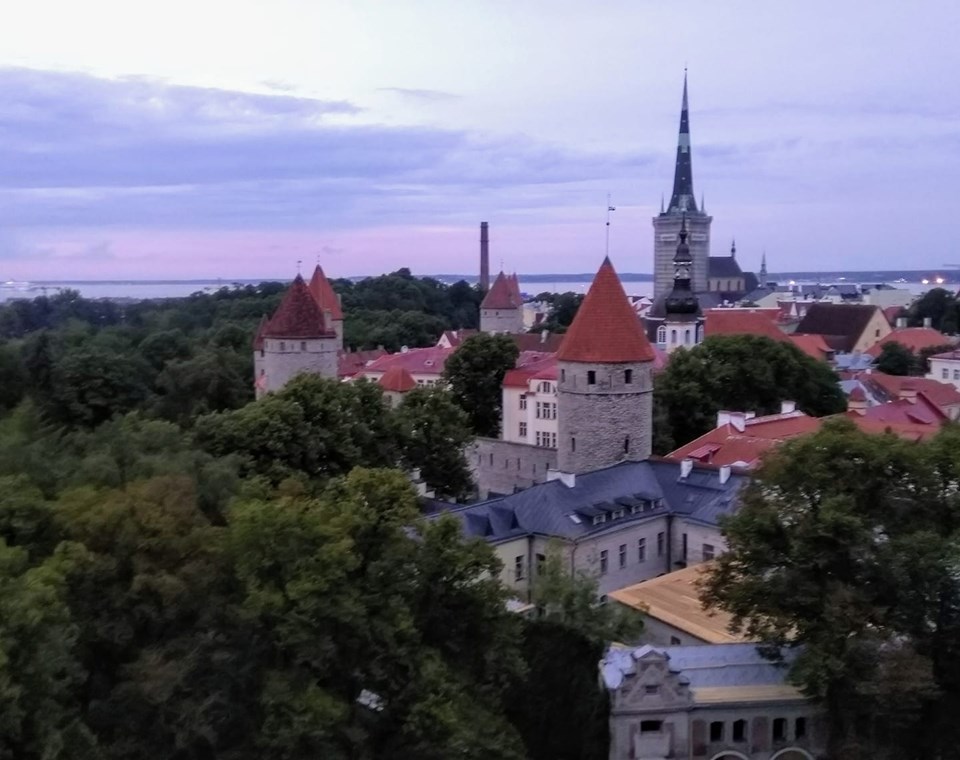 The view at sunset

It’s very easy to spend some time simply wandering around the streets (be prepared for the hills and cobblestones!) taking in the sights of the buildings and their various influences, and the atmosphere of the Old Town, but on this particular day, thunderstorms had suddenly rolled in towards the end of the walking tour, turning the narrow roads into streams, and so I decided to seek an indoor activity. 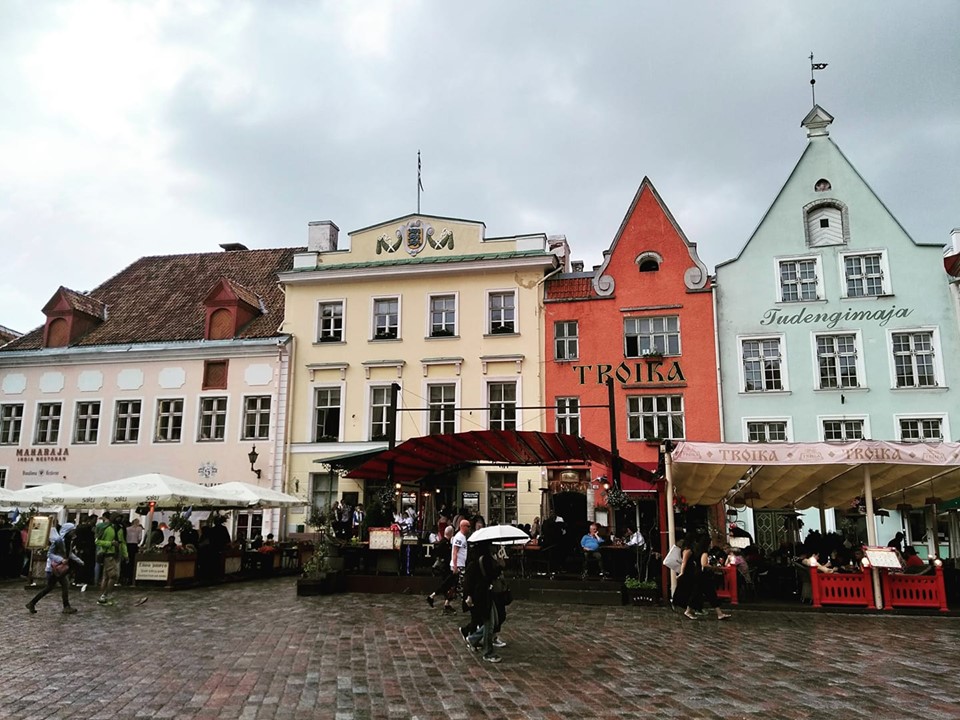 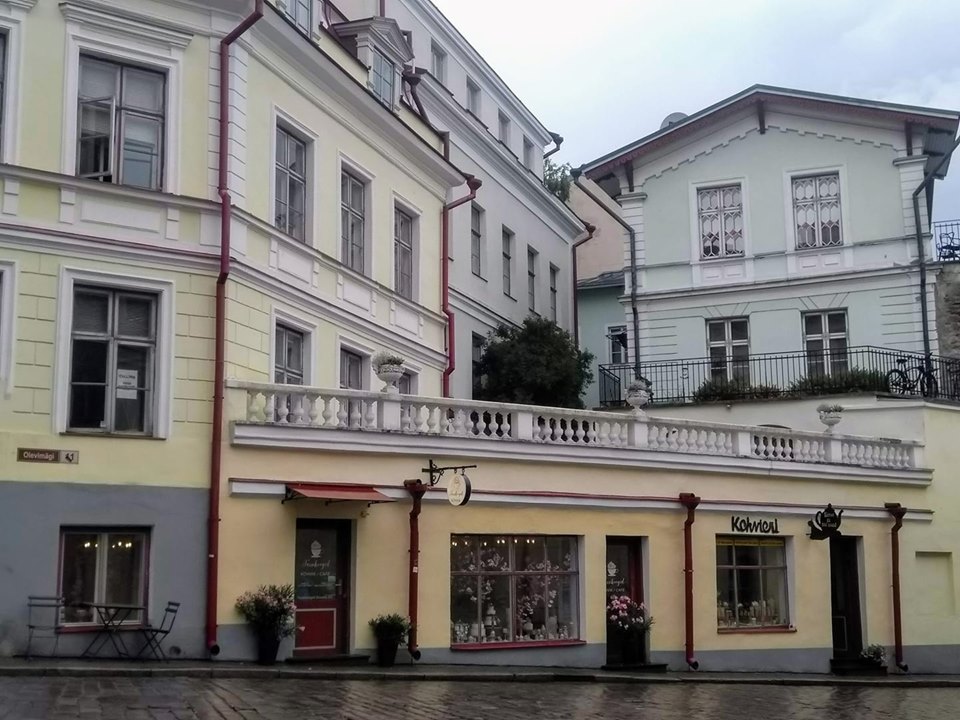 I would have missed the old KGB Headquarters on Pagari if I hadn’t been looking for it. It just looked like a normal building along the Old Town streets; looking up, however, there was a small sign above the door indicating that this was the site of the KGB Prison Cells museum. Seventy years ago this building, with its bricked-up basement windows, was the site where suspected “enemies of the state” would be imprisoned, interrogated and tortured by the KGB, the Soviet security agency, before being shot or sent to the gulags in Siberia. Today, along with the open prison cells it houses a wine bar and a vegan restaurant, which is a somewhat surreal thing to think about. The prison cell exhibitions are small but well worth the €5 entrance fee; it’s a sobering experience to stand in the cells, to see the tiny narrow cupboards that prisoners would be shut into for days at a time, and to read the stories of some of those imprisoned there. 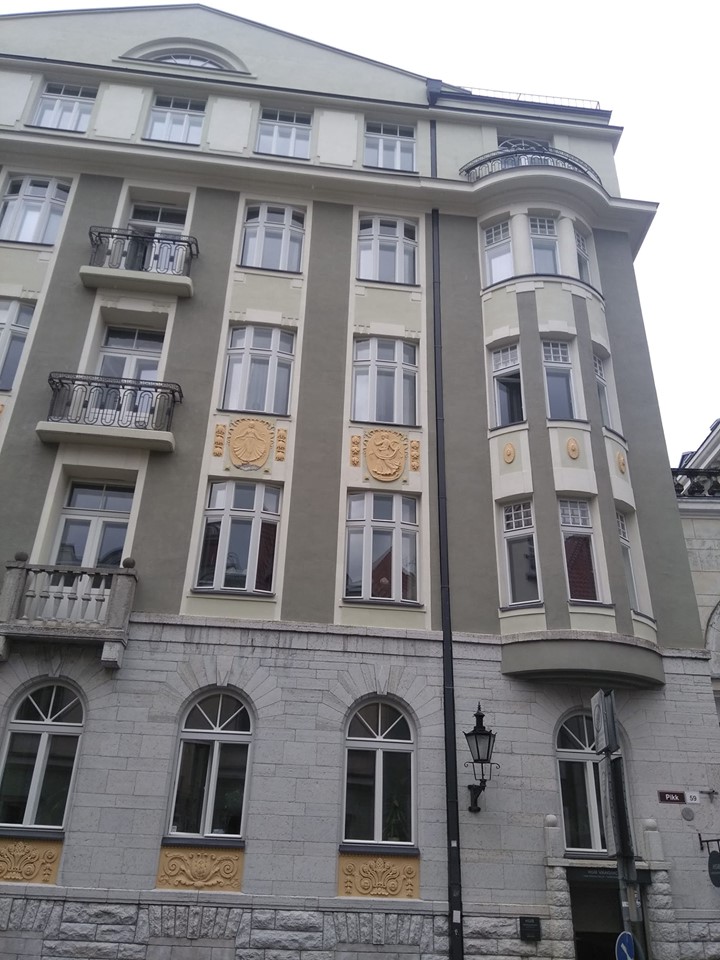 The building which housed the KGB Headquarters in Tallinn

Another essential activity for learning about Soviet era Tallinn is a visit to the KGB Museum at the Hotel Viru. I did this on another day as all visitors must book onto one of the timed guided tours which run throughout the day, and it’s best to book online in advance, especially during high season for tourism in the city.

The Hotel Viru was built in 1972, specifically for foreign visitors only (no locals were allowed in unless they worked there), in the Soviet Union’s tourism drive. With rooms spread over 22 floors, it was the tallest building in Tallinn at the time, and everything was five-star quality to ensure that guests went back to their home countries with a positive impression of life in the USSR. From the outside, however, it was very clear that there were actually 23 storeys to the building, despite what the publicity said. Any enquiry as to what was up on the 23rd floor was met with a response of, “oh, nothing.” Everyone, as Margrit, our tour guide at the museum, told us, knew that such obvious secrecy meant that the KGB were operating up there. The truth was that the 23rd floor of the Hotel Viru was a KGB listening station. When the agents fled quickly after Estonia declared independence from the Soviet Union in 1991, they left a lot of debris behind; notes, uniforms, listening devices and hurriedly smashed-up telephones, which means that there are plenty of original artifacts to see. The Soviet security agency obviously wanted to keep a close eye on foreign visitors, and they manufactured all sorts of ways to spy on the guests, from hidden cameras and microphones in holes in room walls, to bugs placed in dinner plates and ashtrays in the hotel restaurant. I won’t share any of the stories which Margrit told us so as not to spoil it for anyone intending to visit, but they were fascinating, as was the opportunity to have a good look around these offices which were so secret not so long ago. The hotel is evidently capitalising on its history as far as possible too; the balcony on the 23rd floor with a fantastic view over Tallinn’s Old Town and out over the port has been converted to the “KGB Rooftop Bar” which is open to the public every night! 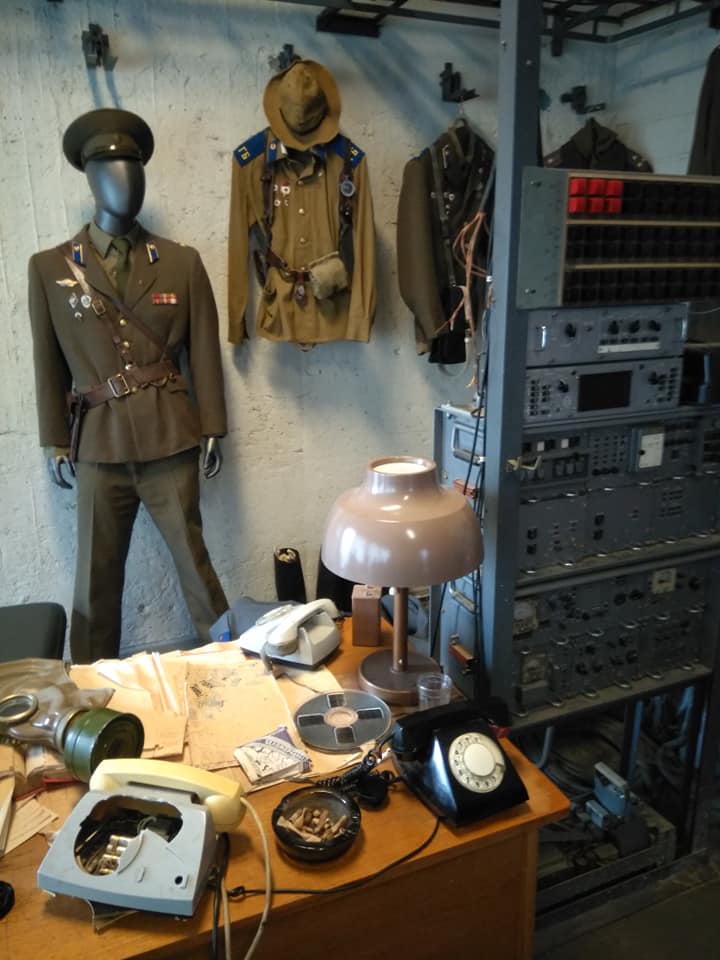 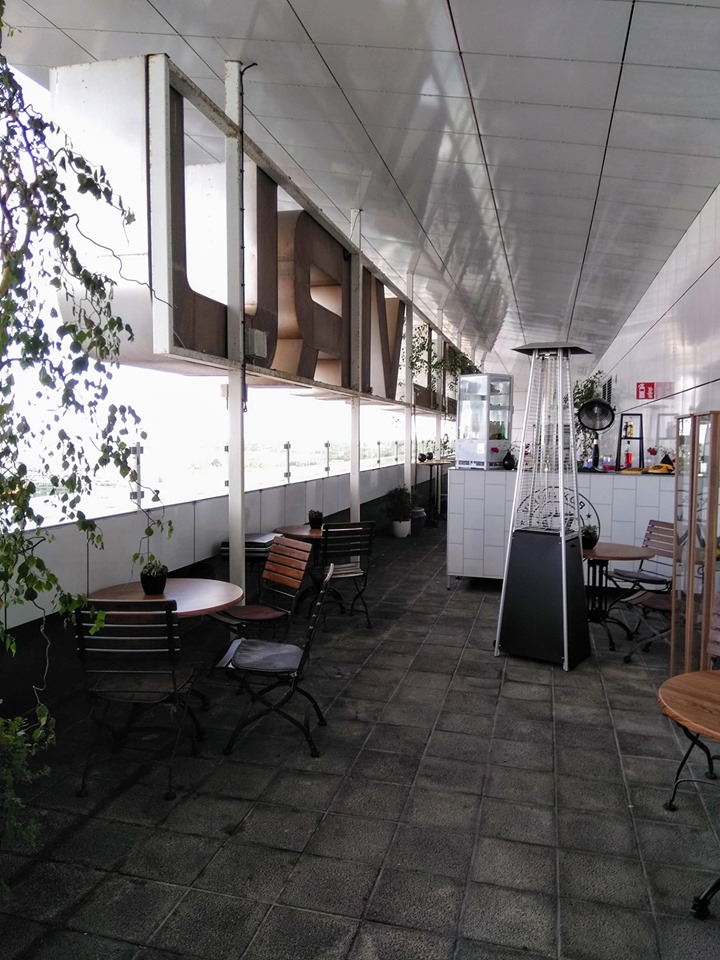 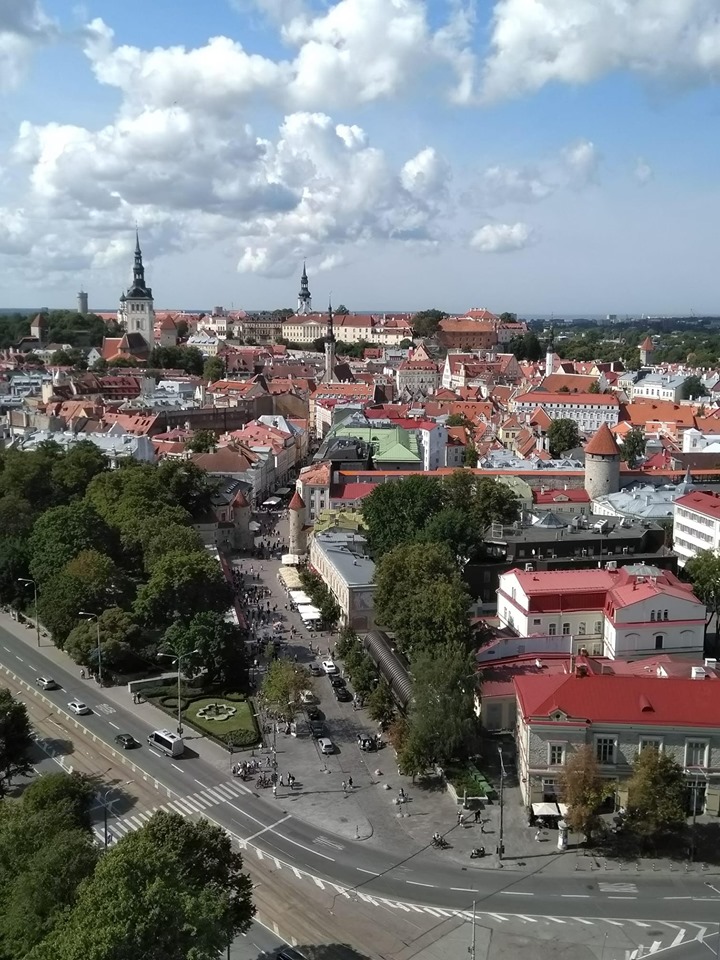 The view from the 23rd floor.

Whilst the Old Town is undeniably both stunning and extremely interesting, there are other districts in Tallinn with plenty to offer too. I spent a morning in Kadriorg, an area just to the east of the Old Town (I walked there – it was probably 25 minutes on foot to the main parts – but there are buses and trams going that way too) which borders the sea. A highlight of this suburb is the beautiful palace and landscaped park, built by Tsar Peter the Great in the eighteenth century. There were still plenty of tourists wandering around, but it was a markedly calmer and more spacious spot than anywhere in the busy Old Town. 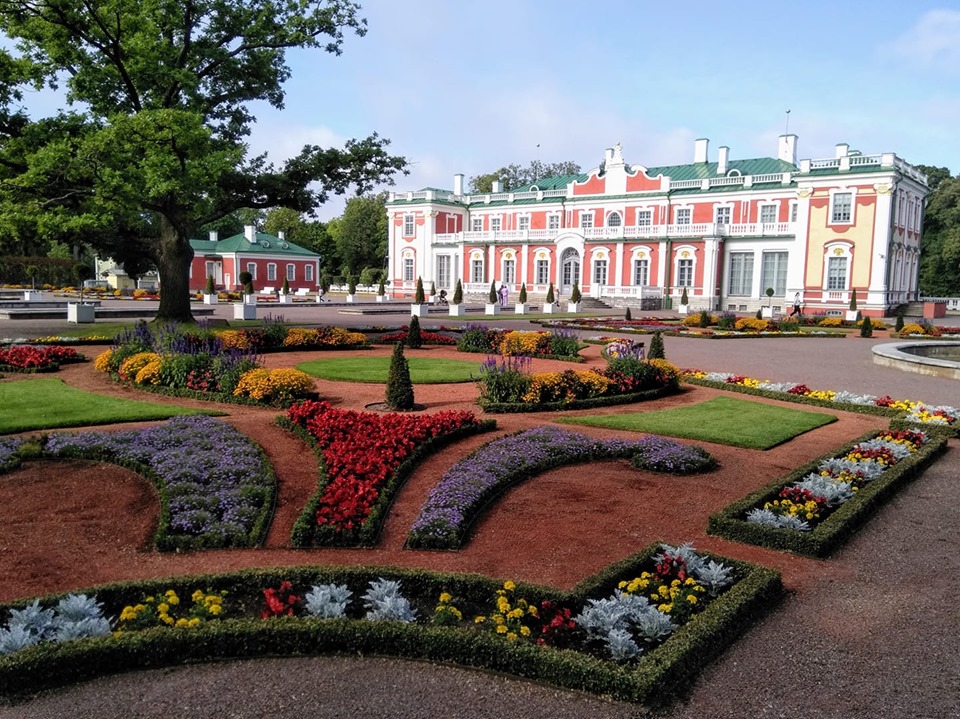 Kadriorg is also the home of KUMU, the national art museum, which took around one hour to explore and offered an insightful overview of Estonian and other Baltic nation art throughout various periods of history from the Romantic period through to during, and after, Soviet rule. 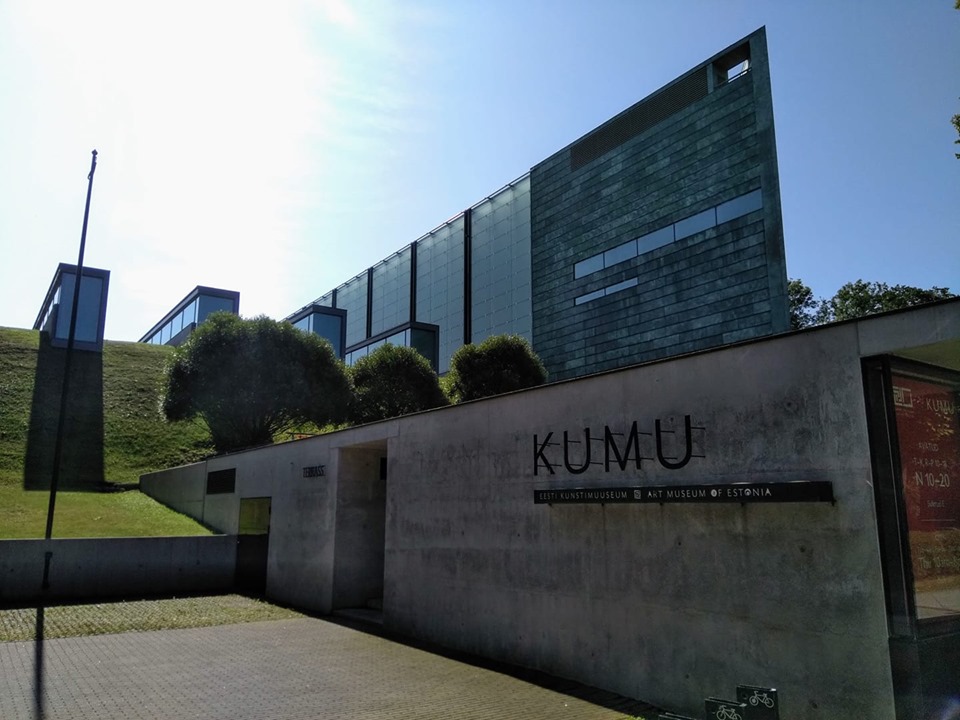 From the park you can walk down to the sea; extensive roadworks when I was there made this a more arduous task than it should have been, but once I finally found a place to cross the carriageway, I was able to walk along the bayside a little, watching the ferries leaving the port for Helsinki and St Petersburg. There’s a bit of sandy beach here too, where a few local children were playing. 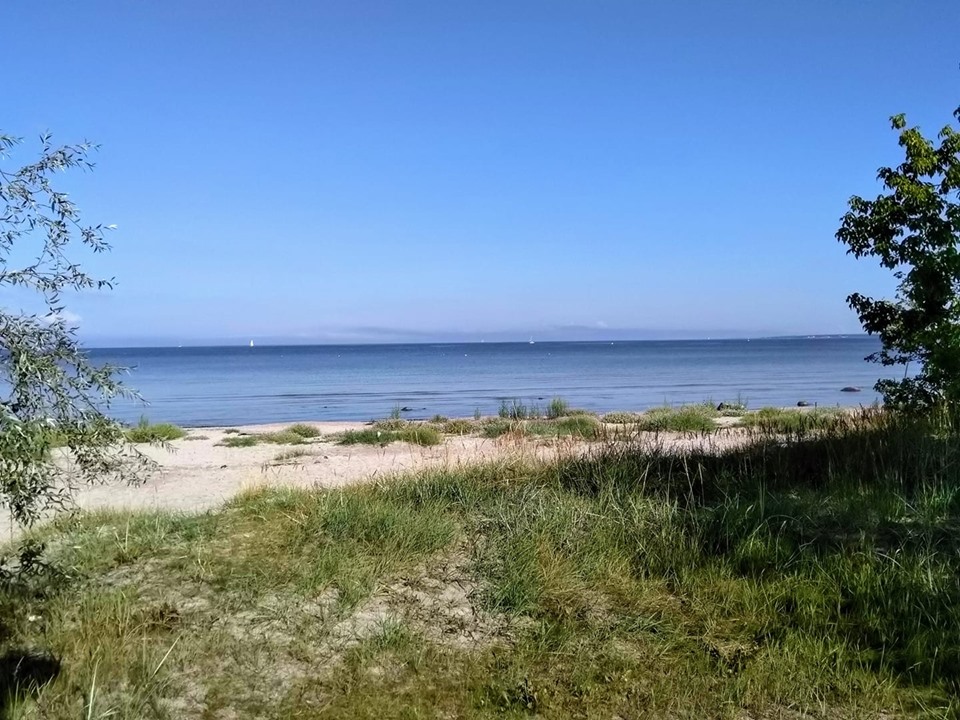 In the other direction, a shorter walk west from the Old Town, is Kalamaja, another popular district to explore. Formerly merely an industrial area, Kalamaja has come to life as an attraction in its own right in recent years, with the maritime museum out on the seaside end of the suburb, and the hipster hotspot of Telliskivi Creative City, right by the city’s train station, offering a multitude of trendy bars, restaurants, flea markets, and some lovely street art. 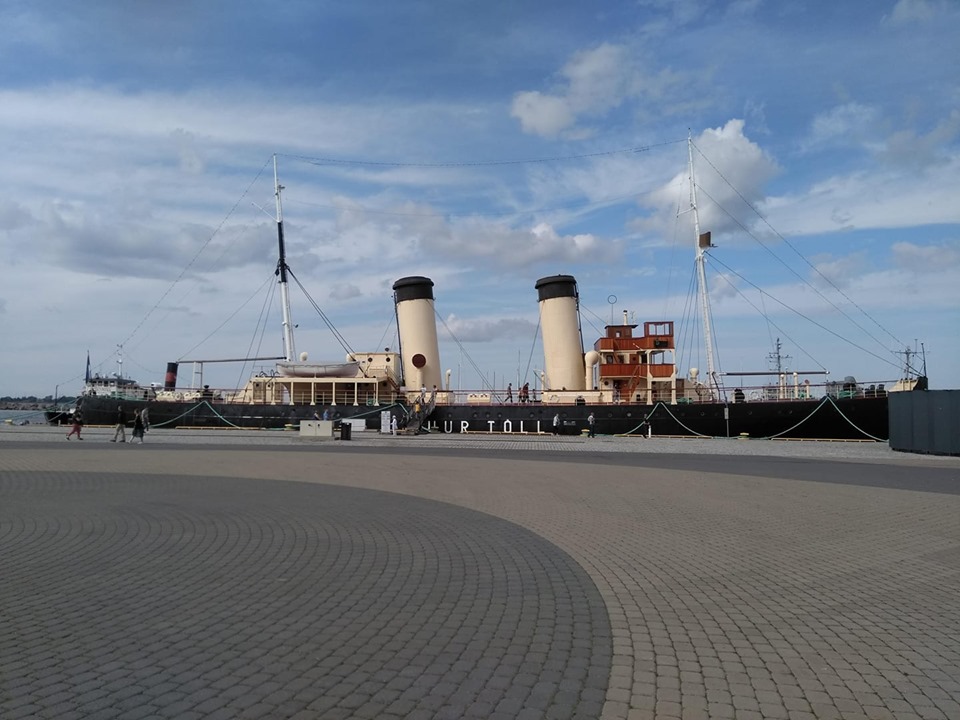 An icebreaker at the maritime museum 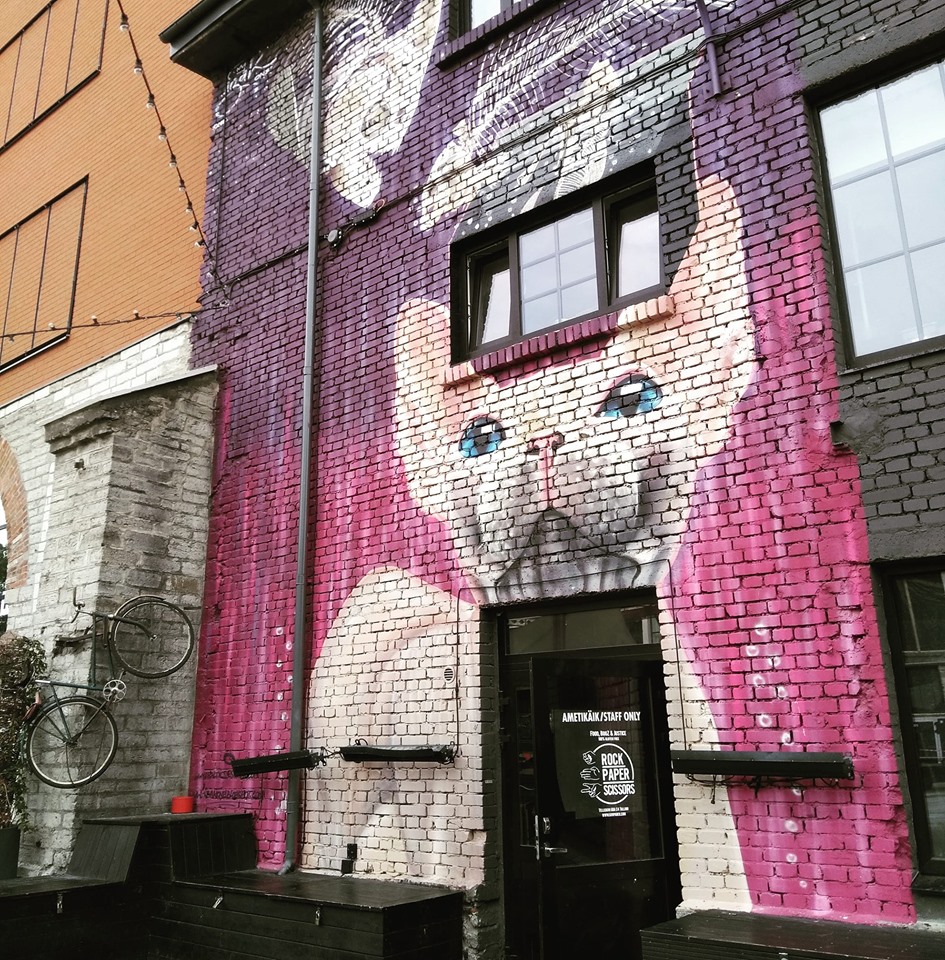 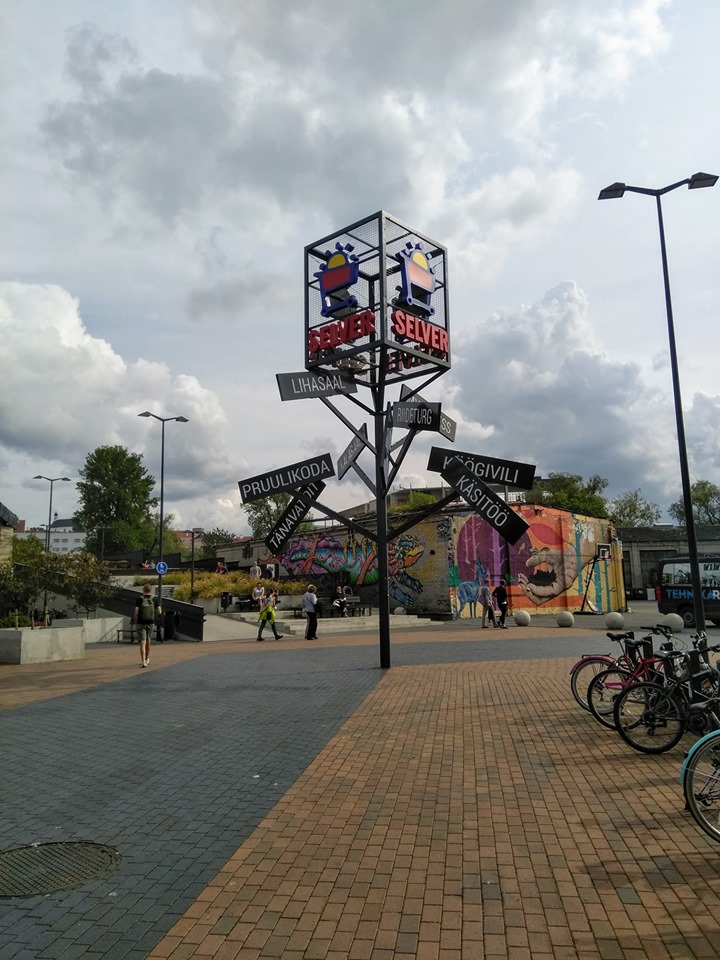 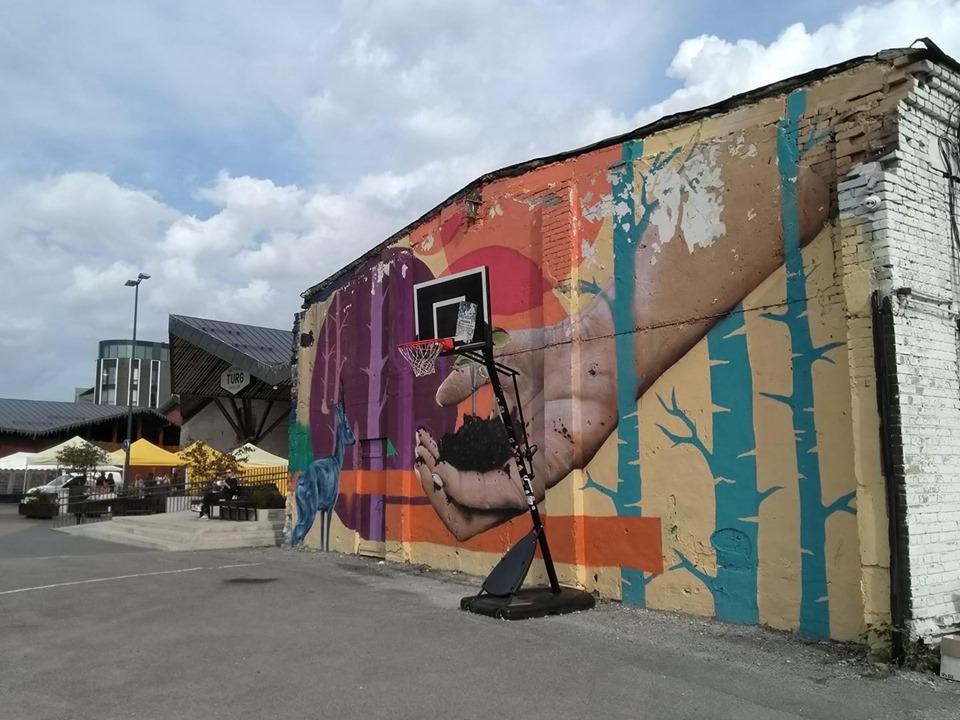 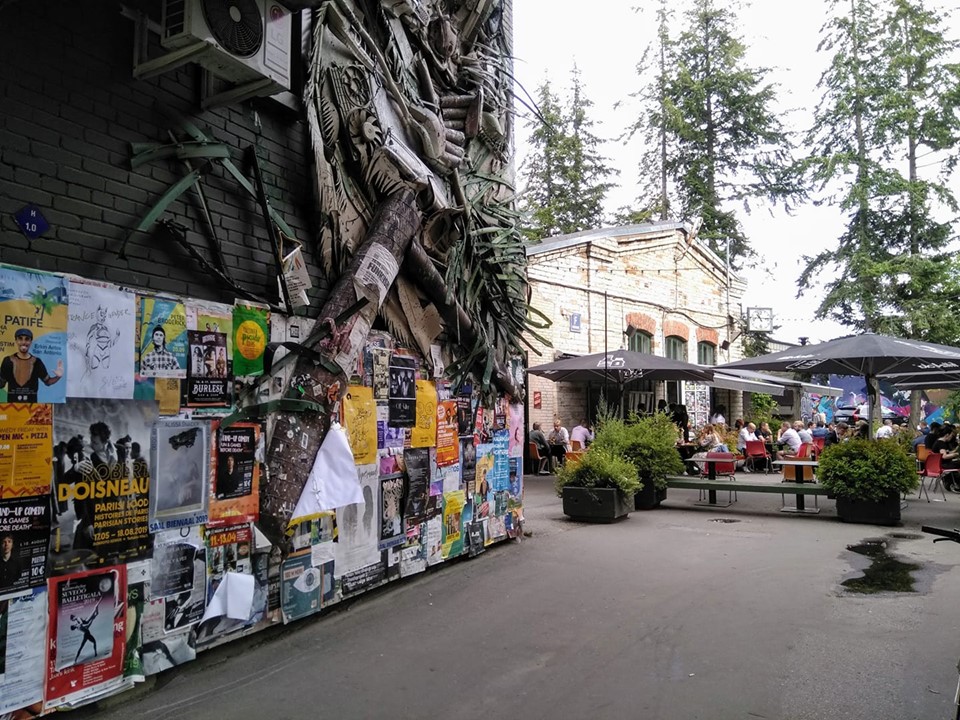 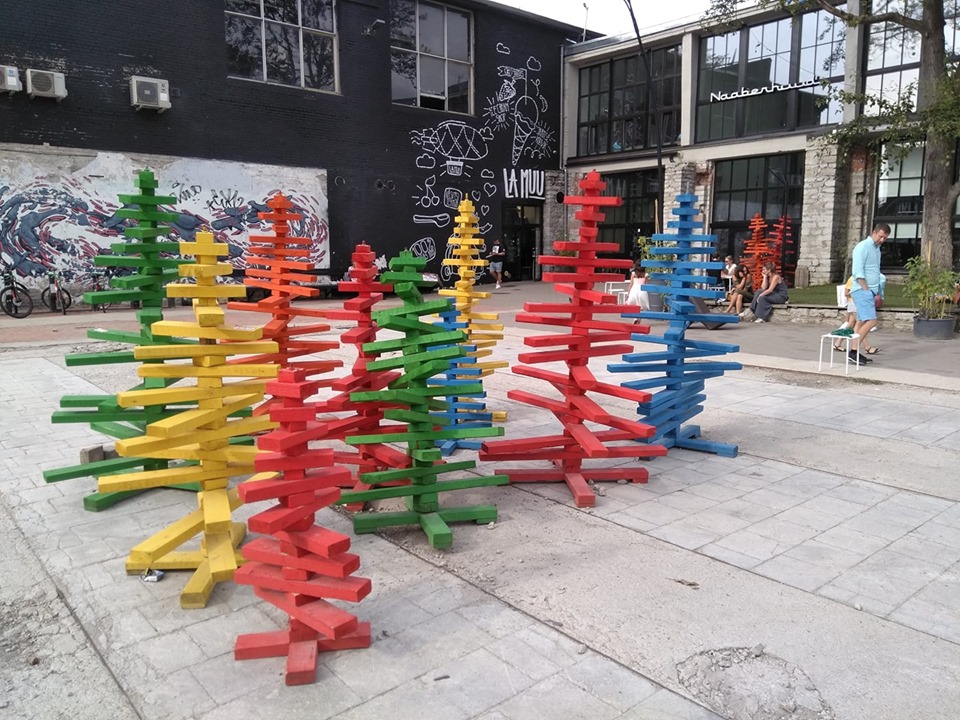 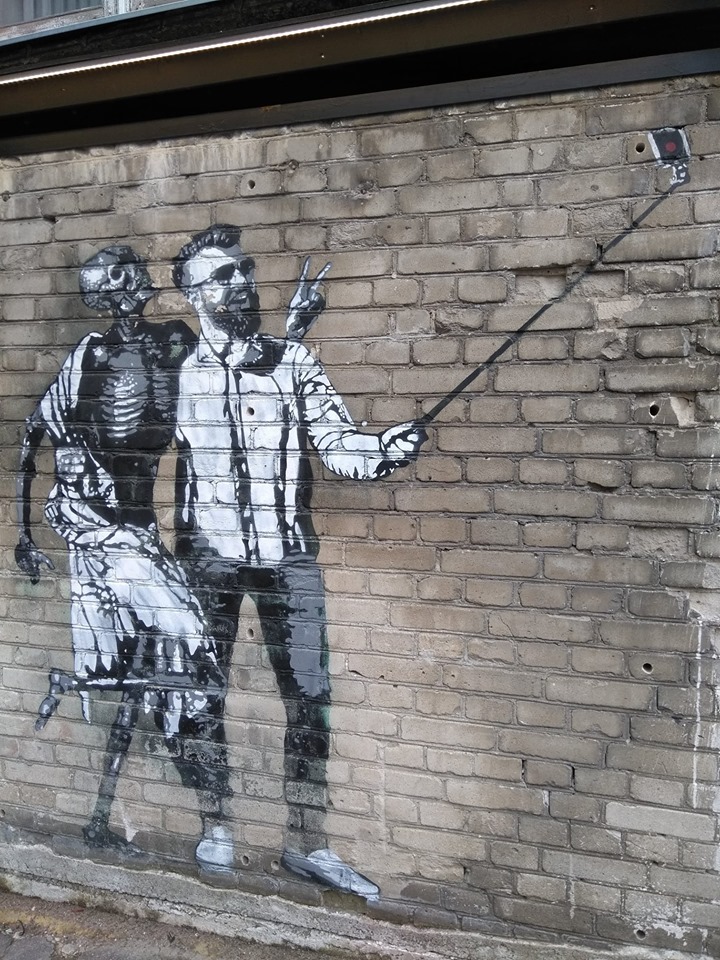 As regular readers will know, food is always a feature (good or bad!) of my trips, due to my vegan diet. I was surprised and impressed at the amount and the quality of vegan food available in Tallinn; it was very easy to dine out, and there were several recommended establishments that I never even got round to checking out. My favourite spot was the vegan restaurant that I’ve already mentioned, the one that lives in the ex-KGB Headquarters at Pagari 1; Vegankohvik Inspiratsioon. They offer excellent vegan burgers, local beer and cider, and coffee and cake (even tiramisu!). I also enjoyed a brilliant meal at Vegan Restoran V, Tallinn’s most popular vegan restaurant, where it’s difficult to get a table due to its fame and its small size (I did it by going at 3pm, between lunch and dinner) – all of the menu looked amazing, but I settled on the tofu and quinoa burrito in mango sauce, and a glass of Estonian rhubarb sparkling wine, both of which were delicious. I also found it easy to purchase breakfast and snack foods, including high quality fresh fruit, in the local supermarkets (Rimi Express or Rimi Mini). 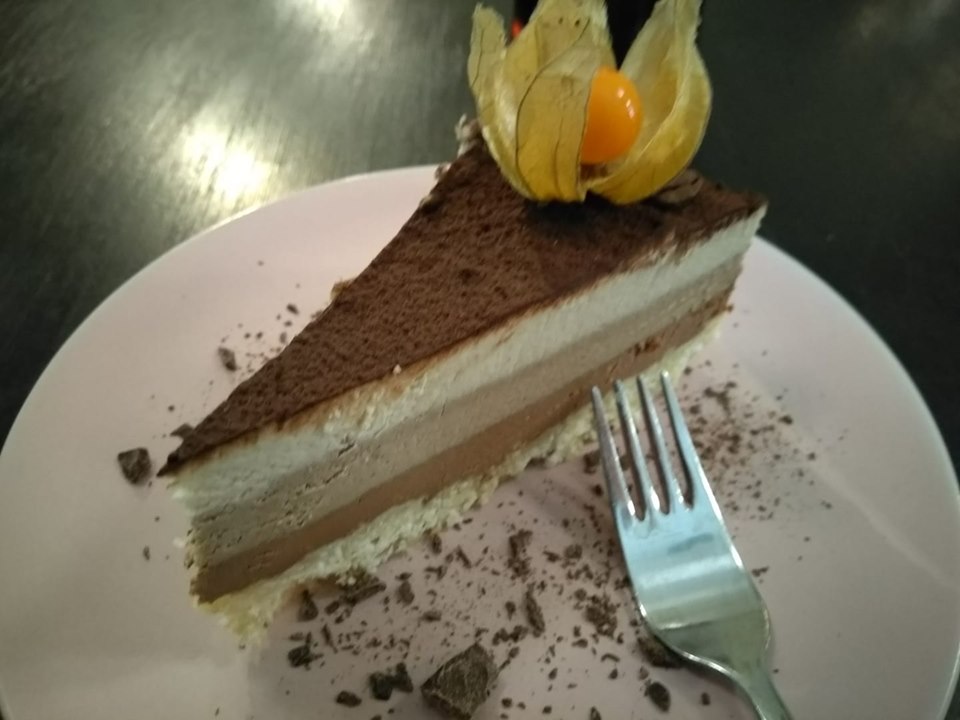 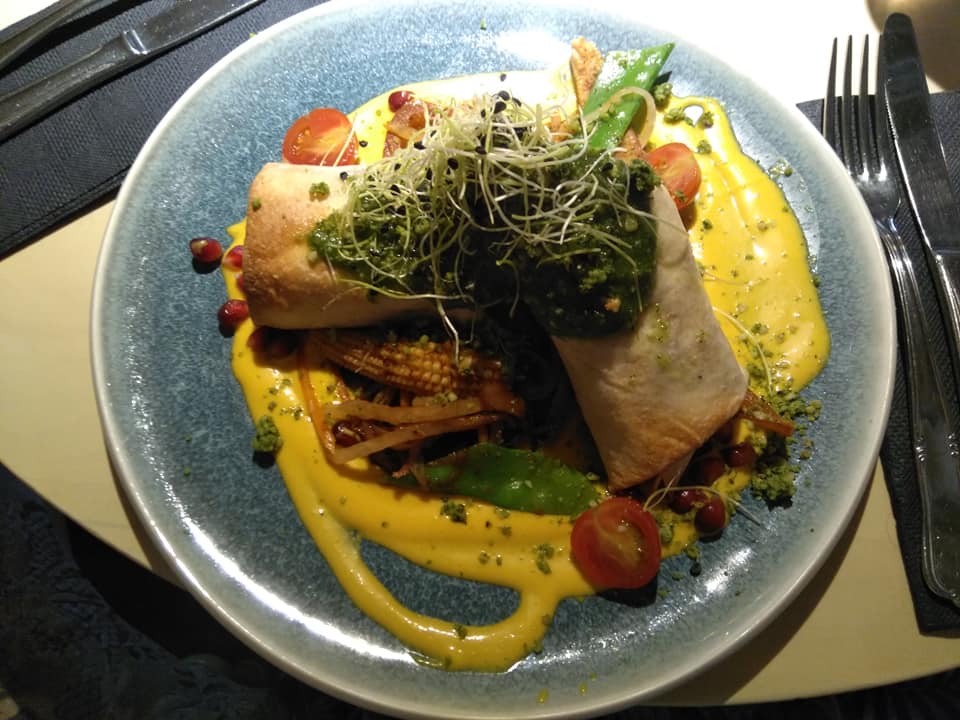 Tallinn turned out to be just as fascinating and pretty as I had hoped it would be, and it was a wonderful place to spend a few days. It was also very well-placed for some excellent day trips; stay tuned to read more about those… 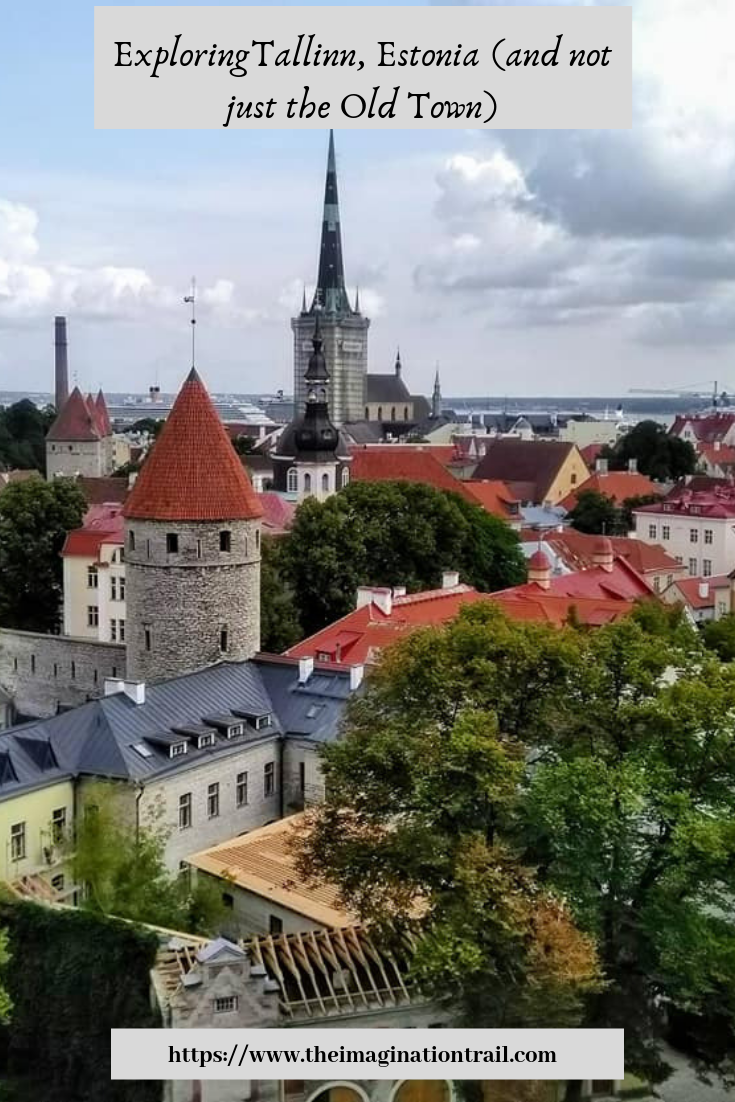 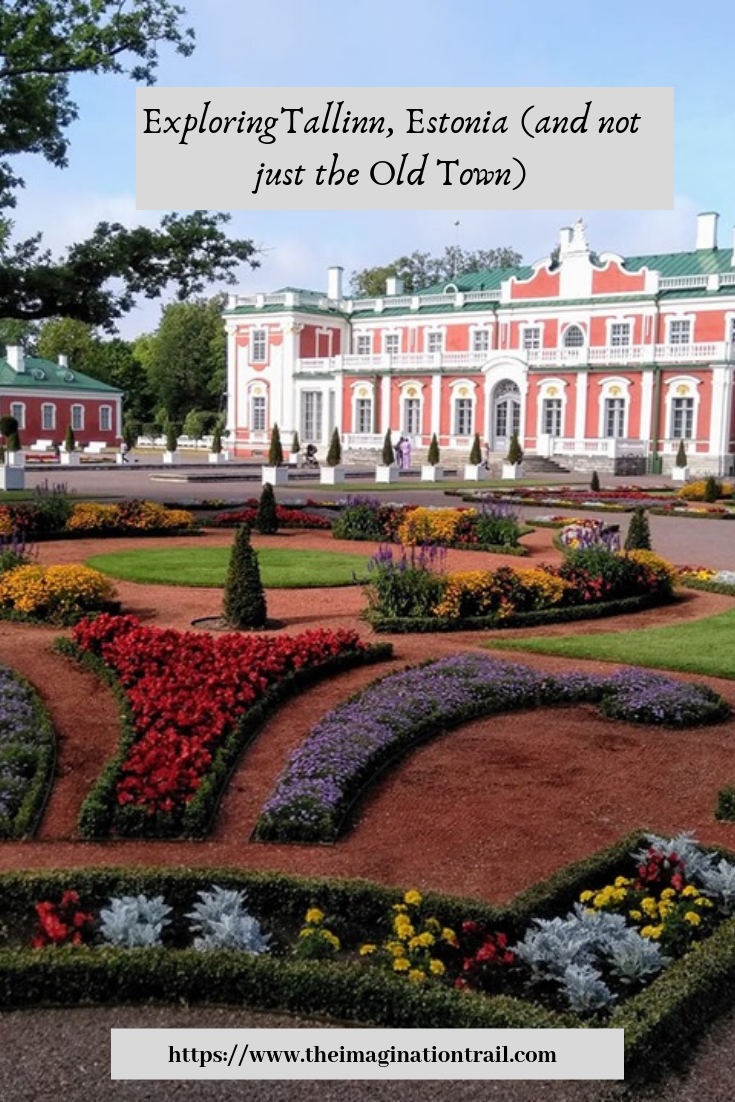