Architecture, history, and plenty of rain: 24 hours in Krakow, Poland 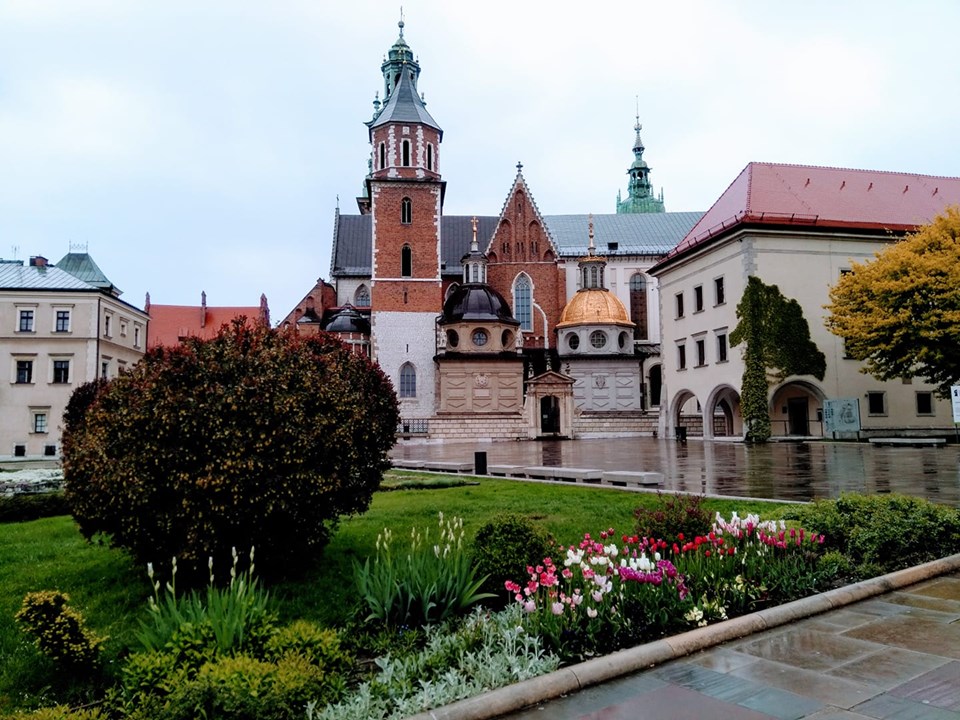 Regular readers may be wondering what happened to New Zealand; after taking you through my two years in Australia I left you at Brisbane airport, on the way to Auckland, and now we’re suddenly in Poland! I am working on a series of posts to share with you my three weeks on both stunning islands of New Zealand, but having just returned from a long weekend in Krakow, I really wanted to put my thoughts down on my experience at Auschwitz-Birkenau while it was fresh in my mind, hence the change in direction.

Krakow is somewhere that I’ve always wanted to visit, ever since I was a teenager. I’m not quite sure why – I think perhaps it was due to studying the history of Soviet rule in Europe at school, and as a result having an interest in those places that had been “behind the iron curtain” until relatively recently. Having returned to the UK and moved to London, I now have easy access to Europe (something which feels like a novelty after two years down under!) and so when I found myself with a couple of days off work, Krakow seemed like the ideal destination for a long weekend trip.

I checked into a single room in the Smocza Jama hostel, situated on Wielopole right in between the Old Town and Kazimierz, the Jewish Quarter, and in easy walking distance of the main sights. It didn’t seem to be hugely popular with foreign backpackers – most of the other guests during the time that I was there appeared to be Polish – but it was perfect for a budget traveller like myself who was trying to avoid the party hostels. It was one of those small European hostels that sits on one floor of a regular residential building, meaning that you feel almost as if you are an inhabitant of the city rather than just a visitor; something which I really enjoy about these kind of properties.

It was early evening by the time I had settled in, so I did have some time to walk around the Old Town for a preview, but I only really had one full day to explore Krakow. Of course, the next morning I awoke to the pelting of rain on the window! There was nothing for it however but to down a couple of coffees, wrap up warm (luckily I’d checked the weather forecast whilst packing and dragged my winter coat back out for the trip), grab my umbrella, and make the best of it.

I decided to begin my day in Krakow as I often like to do in European cities, with a free walking tour of the Old Town (where you tip your guide at the end whatever you think the tour has been worth). There are many different companies in the city offering these, all starting from the meeting point of St Mary’s Basilica in the Main Square, so I decided to head there for around 10am when the tours generally begin, and just pick one (they were particularly easy to spot today as they all had their branded umbrellas up!). I ended up in a group led by Bart of Krakow Explorers. Bart took us through the Old Town, showing us spots such as the remains of the medieval city walls, the old town hall, the Cloth Hall, and the oldest university in Poland (and one of the oldest in Europe) before ending up at the Wawel Castle and the “Dragon’s Den” (in Polish, Smocza Jama – that explained the name of my hostel), the cave lair of the Wawel Dragon, which legend says lived on the banks of the Vistula River during the reign of King Krakus in the Middle Ages.

Bart was very knowledgeable about his city, and was also a great storyteller. I learnt a lot about the tumultuous history of this old city which has been in existence since the seventh century; from invasions by Mongol armies in the 1200s, to a period of 123 years from 1795 to 1918 when Poland itself ceased to exist, and even speaking the Polish language was punishable by death, then the Nazi occupation of the Second World War, in which 17% of the population of Krakow was killed, either in the concentration camps, or in the “liquidation” of the Krakow Ghetto just south of the river, and then nearly 50 years of communist rule. As one of the oldest cities in Poland, and the official capital until 1596, there is an immense amount of history to see and experience in Krakow, surviving the turmoil that it has faced; the Old Town is now a designated UNESCO World Heritage Site. I think that taking a walking tour with a local expert was most definitely the best way to discover this part of the city (and Bart was also very good at judging when to stop for a coffee for an indoor history lesson away from the unrelenting rain!). 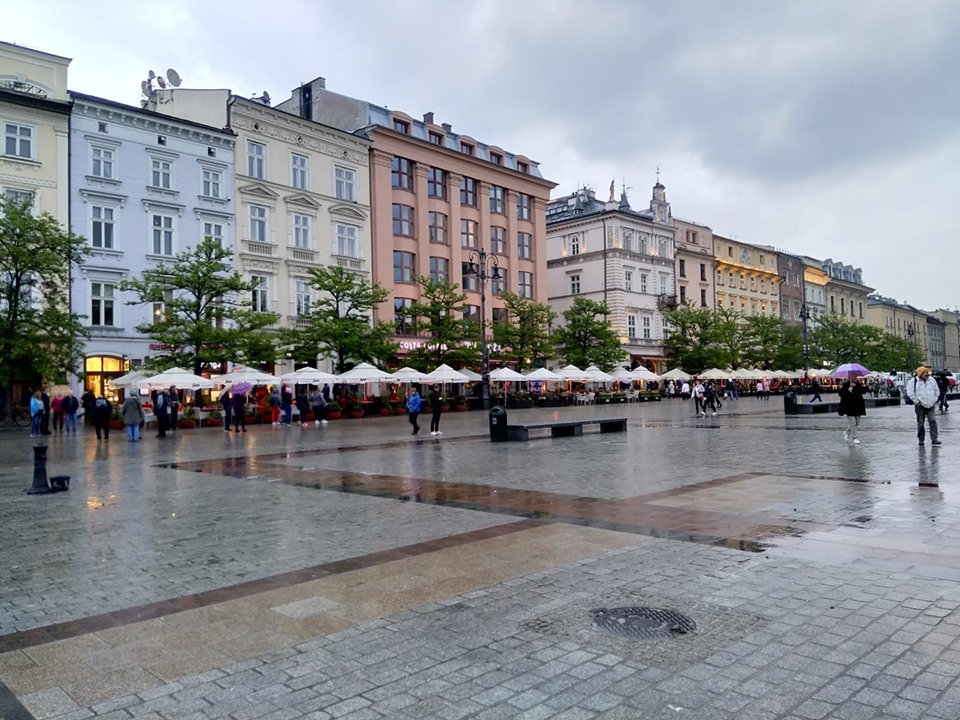 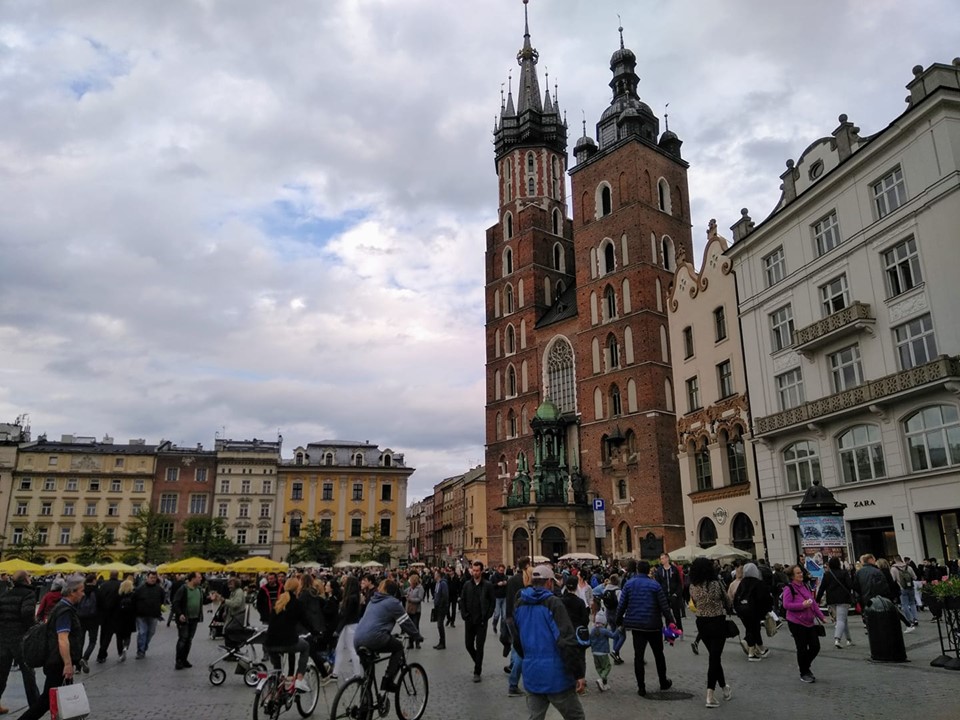 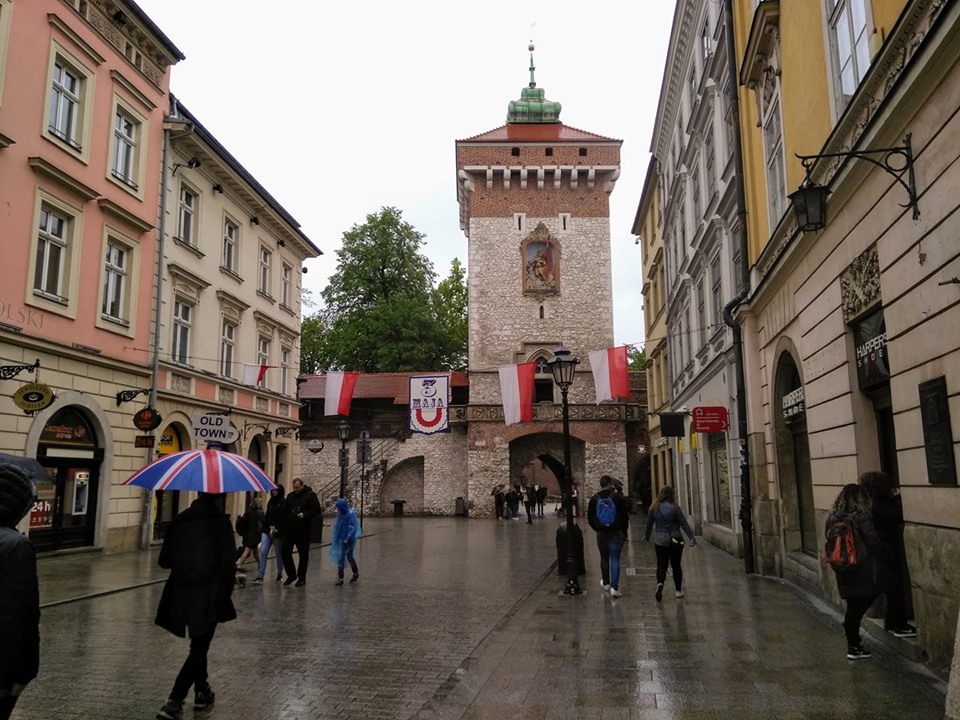 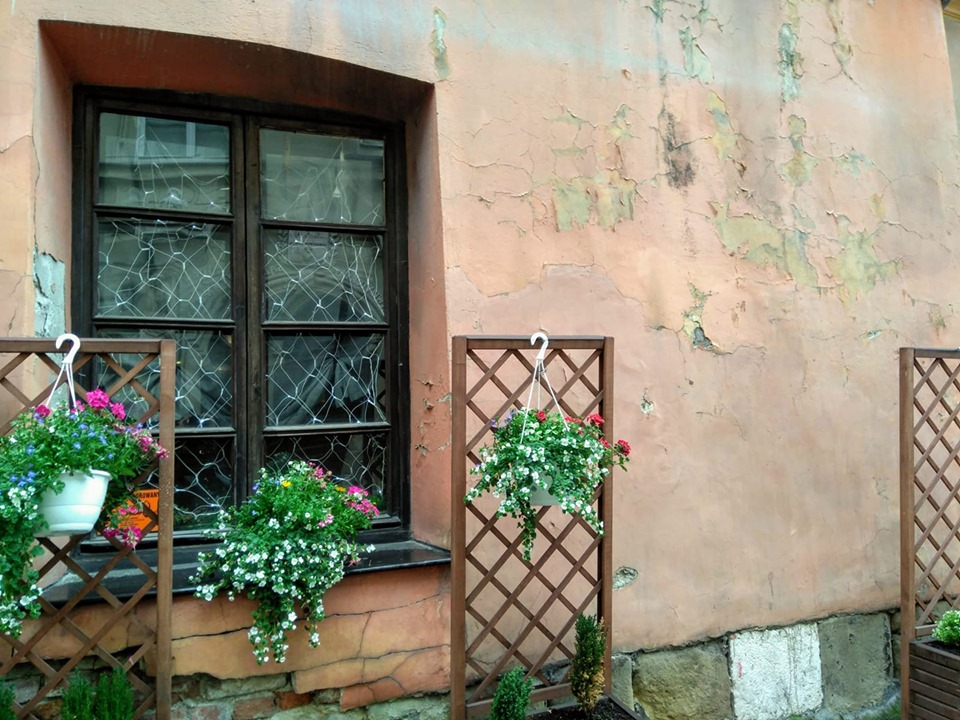 After a quick stop back at my hostel to make some lunch and dry off a little, I headed back out in the other direction, to explore Kazimierz, the city’s Jewish Quarter. The walking tour companies all offer an afternoon tour of this area, so you can do this one after the morning tour of the Old Town, but given that the rain wasn’t letting up in the slightest, I decided to go for a solo wander this time, in case I had to give up and seek shelter!

I enjoyed walking around looking at the buildings and checking out the street art that is prevalent in this part of Krakow, but on reflection it might have been a good idea to join a walking tour after all; I feel that I may have missed out on some points of historical interest, as it’s not one of those areas which has very obvious “main attractions”. 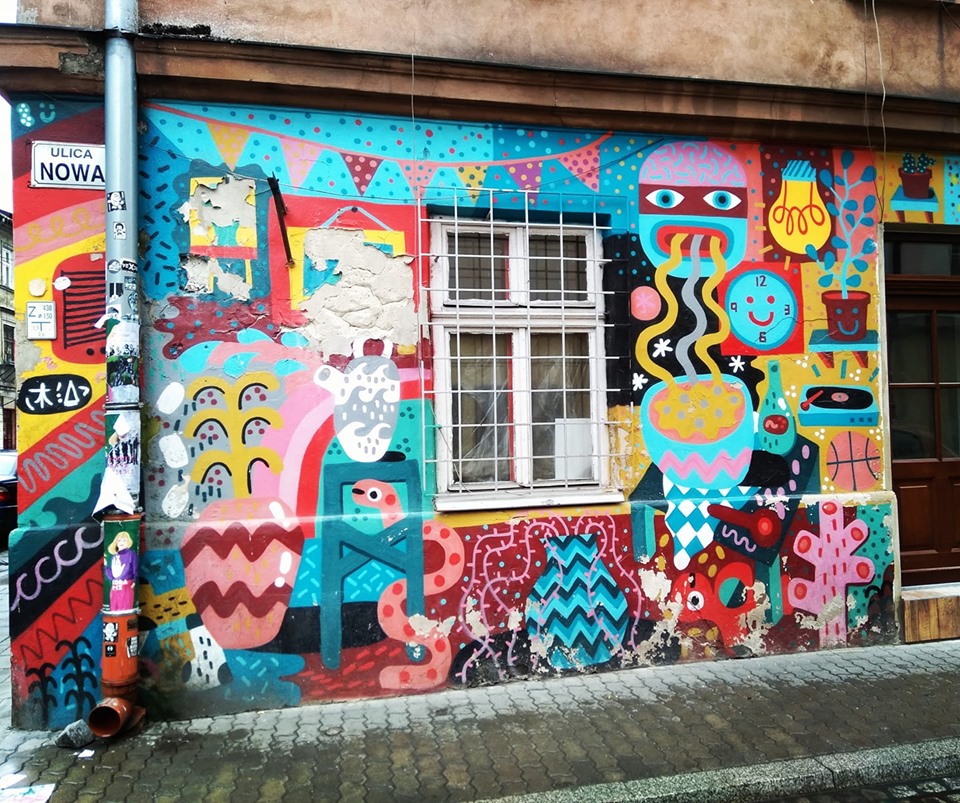 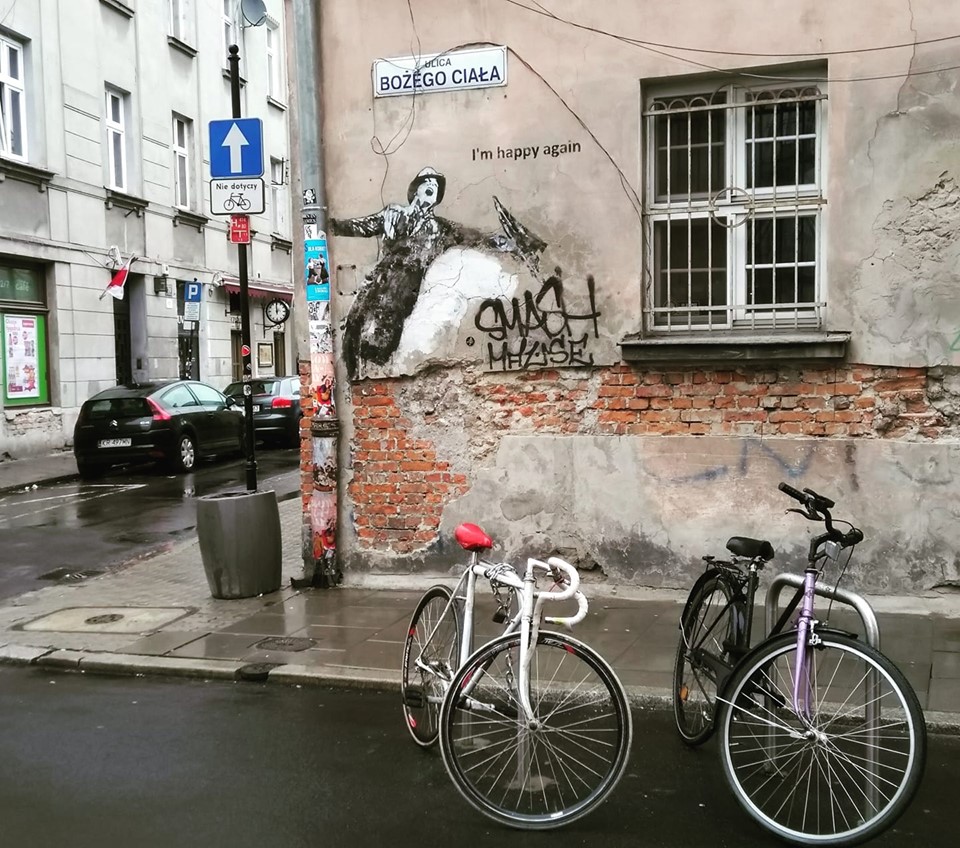 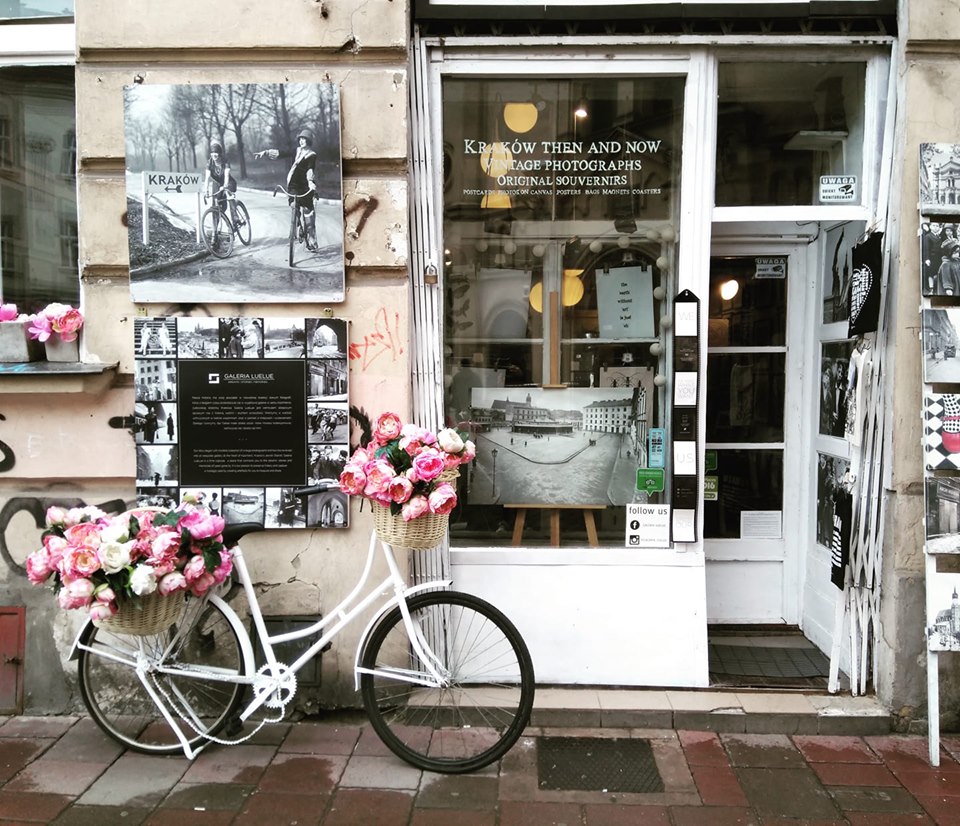 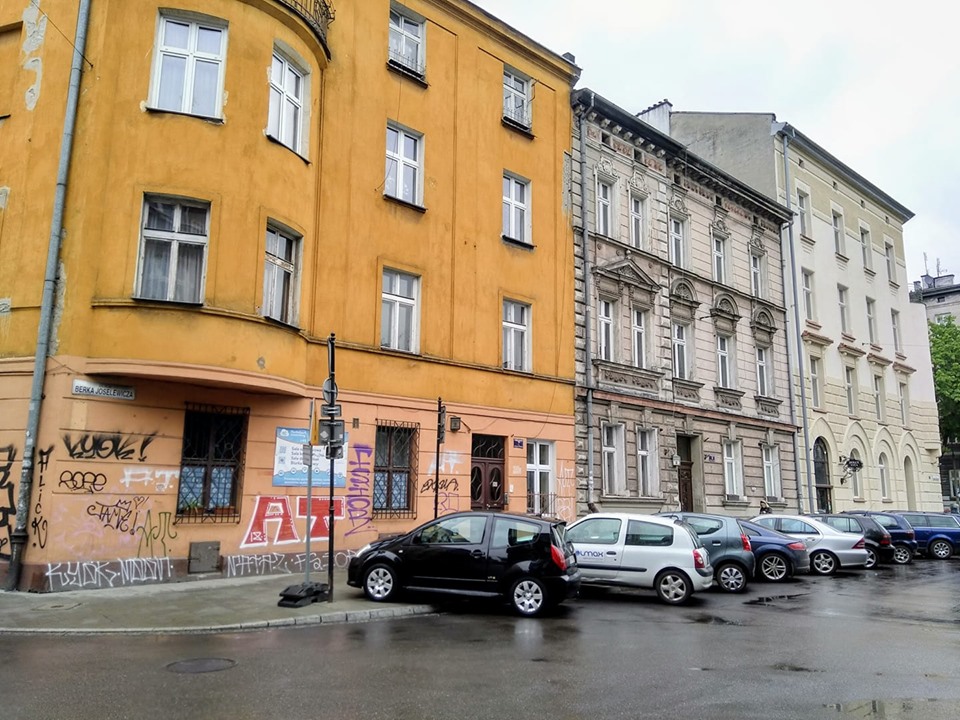 Kazimierz opens out on to the banks of the Vistula river, where I found the Bertanek Footbridge, adorned with the lovelocks that you expect to see on European city bridges, as well as the unusual sculptures of people dancing and playing, which are suspended the length of the bridge (looking these up when I got back to the hostel, I discovered that these were a temporary art exhibition which ended up staying put). 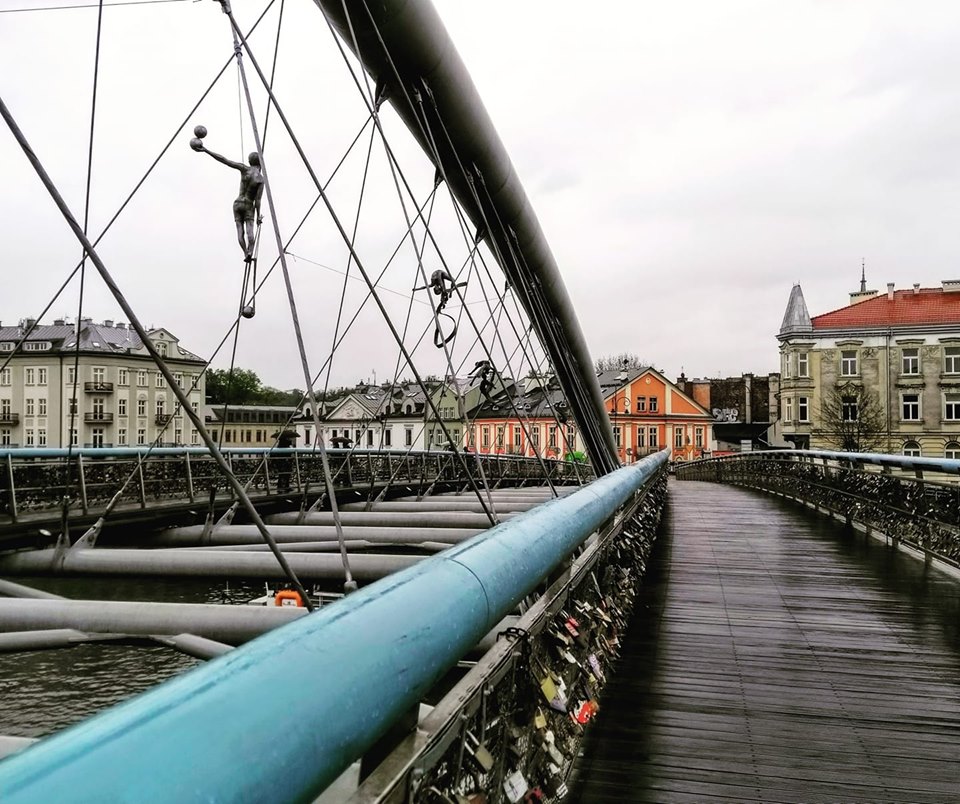 I wasn’t sure what I would be able to find in terms of food that I could eat in Krakow, so I was pleasantly surprised at the number of vegan restaurants operating in the city. At Farma Burgerownia Roślinna I enjoyed a vegan zapiekanka (an open-faced sandwich, usually topped with mushrooms and cheese, which is a popular Polish dish) one night and one of their trademark vegan burgers the next, both washed down with some Polish lager, which I found to be particularly strong – my beer-drinking friends disagreed with me when I mentioned this, but if, like me, you’re not much of a beer drinker, just be mindful of how much you imbibe! I also ate at Vegab which is, as the name suggests, a vegan kebab joint. My restaurant meals were all fairly cheap, as was bottled beer in the grocery stores. I did, however, find that my only options for eating out were the vegan establishments; the regular restaurants had very little on their menu by way of even vegetarian options. I purchased food for breakfast and for a “packed lunch” from the small supermarkets in the city, but found it difficult to locate good quality fruit and vegetables – and when I did, they were fairly expensive (this may not be in the case in the larger stores out in the suburbs). 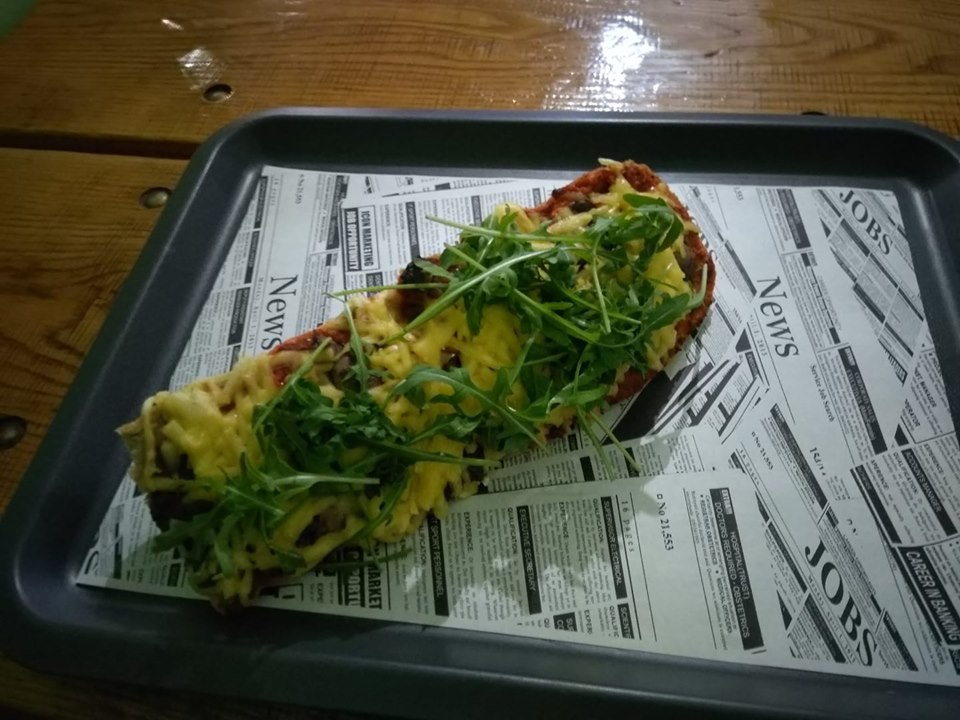 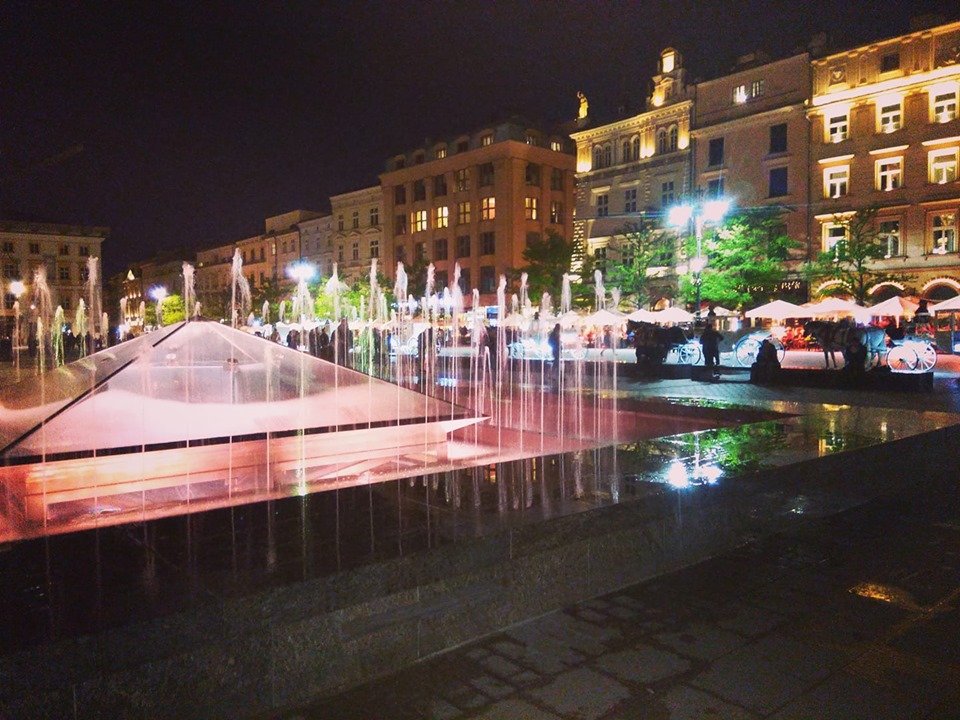 I unfortunately didn’t have time to fit in a trip to the Wieliczka Salt Mine, something which many people recommend on a trip to Krakow. In hindsight, it would have been good to have had another day in the city, to see not just the mines, but also some other spots such as Schlindler’s Factory. One day was enough to get a sense of the vibrant history of Krakow and to see its beautiful architecture, but if you can spare the time, I would recommend planning for two. 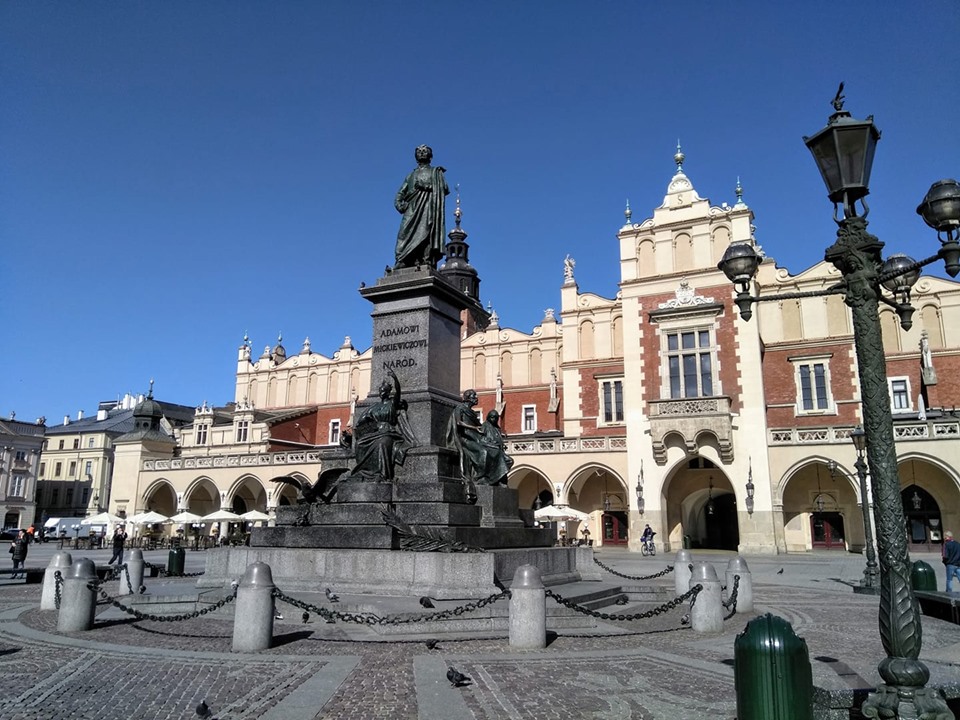 Of course the sun came out on the morning I left!