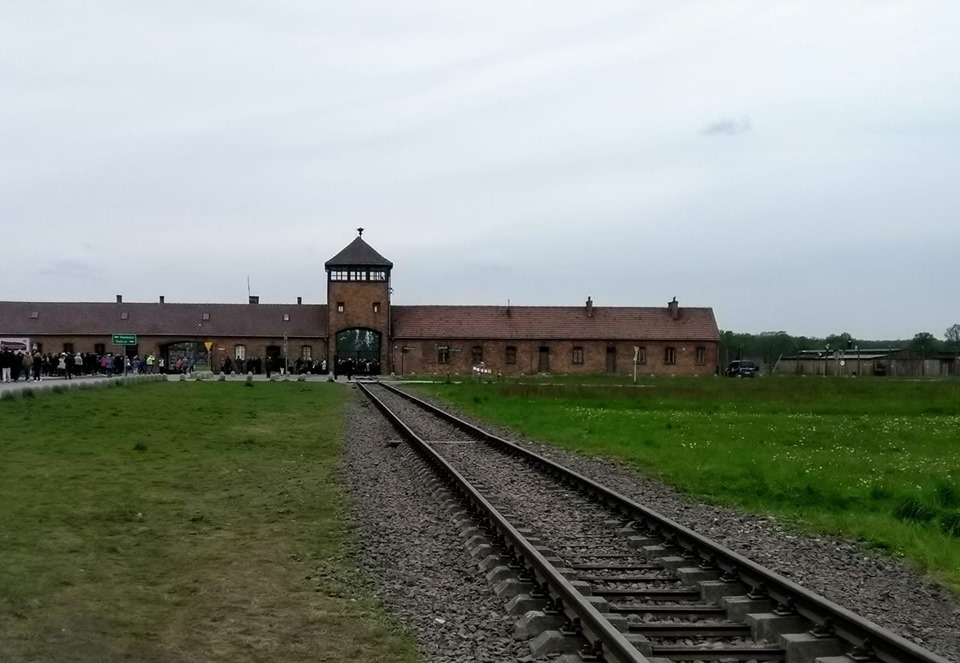 I’ve always tried to visit historical sites of trauma when I find myself in a region where something terrible happened. Not because I have some weird fascination with death and destruction, as some people might think, but because I believe the best way to really understand events of the past is to go and see the evidence that remains, and that the more people see the impact of horror for themselves, the more will do whatever they can to try to make sure that such a thing doesn’t happen again.

Having previously stood at the memorial at New York City’s 9/11 “Ground Zero” and read every name on the stones, and wandered around the Japanese city of Hiroshima to see and hear about the impact of the atomic bomb, I now had the opportunity to visit a site much closer to home, one which was a part of my own history as a European citizen: the famous Nazi concentration camps of Auschwitz-Birkenau.

I’m going to assume that Auschwitz needs no introduction. It’s one of the most famous concentration camps set up by Nazi Germany during the Second World War. Records show that 1.3 million people from all across Europe were sent to Auschwitz, and around 1.1 million of them died there. Most were Jewish, but Roma people, gay people, disabled people, university professors, and anyone else who didn’t fit into the new world and the “master race” that the Nazis were building were also shipped off to the camps.

What is left of Auschwitz actually comprises of two separate camps; the larger of the two, Auschwitz-Birkenau, is the one most commonly referred to as Auschwitz, the one with the railway running into it, bringing trains of people who would then be “selected” for work or immediate execution, but there is also a smaller camp three kilometres away, now known as Auschwitz I, which is where the famous gate proclaiming “Arbeit Macht Frei” (work makes you free) still stands. During the time of operation there were actually around 40 “sub-camps” to Auschwitz, but today only the two remain for visitors to see.

Auschwitz is around 90 minutes’ drive from Krakow, the old royal capital of Poland. It is possible to visit independently, using public transport from the city and a shuttle bus between the two sites, but given that my trip to Krakow was arranged fairly last-minute, and I was only there for a long weekend, I chose the quicker and easier option of booking onto one of the many day tour options departing from Krakow.

As we got off the bus and joined the other groups lining up to go through the security check and enter the first part of the Auschwitz memorial, the smaller camp known as Auschwitz I, I was concerned that I wouldn’t be able to correlate the place with its terrible history because of the number of other people there, that it would feel just like a tourist attraction, being rushed through with groups weaving their way around each other. However, as soon as we came out the other side and caught our first glimpse of the iron-clad words “Arbeit Macht Frei” over the original gate, my stomach lurched. 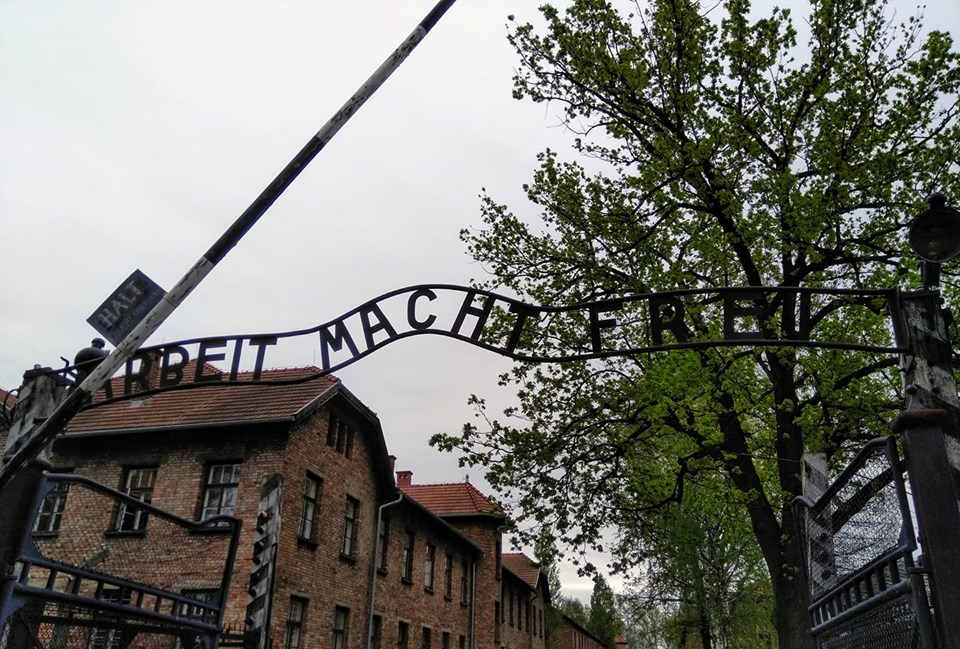 Luka, our local guide, took us through various particular buildings within the camp which contain the evidence of what happened there. Some have been renovated inside, and host exhibits; photographs of arrivals, documents listing details of prisoners, and piles of the personal belongings taken from new arrivals, sorted and stored in a warehouse in the camp – bags, shoes, spectacles. Every room was confronting; the suitcases stacked wall-to-wall, names and addresses scrawled onto the sides in white paint by those who thought that maybe they were being relocated to a new home. The neat, efficient handwriting on official documents. The faces of prisoners in the same striped jackets staring back from the photographs; in some of them, the eyes were already empty, but in others, a half-smile played across the lips – an awkward reaction to being photographed, or a positivity that still remained for some, the hope that they would be free one day? The date of arrival at Auschwitz and the date of death sat underneath each image; by my rough calculations, the average time that they lasted here was about three months.

The final stop at Auschwitz I is the most harrowing; one gas chamber which remains intact (the Nazis burnt down the others at Auschwitz-Birkenau in a hurried attempt to destroy the evidence of their crimes). The crematorium equipment is a replica, but the actual basement room into which victims were led has been left as it is. Luka pointed out in his quiet, matter-of-fact way, the openings in the chamber ceiling where the gas pellets would be placed. It was horrifying to see for myself, and to be standing right where it happened. I couldn’t help but come out of there with tears on my cheeks.

A short drive onwards and we disembarked at the larger camp, Auschwitz-Birkenau, where Luka met us again and we walked the length of the railway running through the gatehouse and into the site; the same walk that thousands of newly-arrived victims did only a few decades previously, after they stepped down from the train and were sorted into two groups. Those deemed fit to work were sent to the barracks, and those put into the other queue were led along this path to the end of the camp, to be “disinfected”, so they were told; the reality, of course, was the gas chamber.

Auschwitz-Birkenau doesn’t have the exhibits or as so much left intact as Auschwitz I does; the gas chambers here are burnt-out shells, and many of the camp buildings were taken down after liberation. Some of the original barracks do still stand, and it is possible to go in and see the rows of wooden plank bunks on which the prisoners slept, bodies crammed in together. However, the remains of the suffering and killing there, as Luka explained, lay under our feet, in the ashes from the crematoria which had nowhere else to be put other than dumped out on the ground. The sense of what happened there hangs in the air; it is an eerie and intense feeling to be retracing the steps of people who were immensely close to an ugly death, and as Luka explained how the camp developed into a place of killing, the cold, horrific reality of what happened here really hit me; they wanted to find the most efficient way to remove as many people as possible from their world. It seems incredible that this was allowed to happen, not so long ago….and it’s scary when you understand just how easily Nazism went from an ideology to a programme of human extermination. It begs the question; could it happen again, right under our noses?

Others, however, did not seem to be similarly affected by their Auschwitz experience. I knew from my previous visits to memorial sites that many people see them as just another tourist attraction, and was expecting to see some selfies being taken. I didn’t actually witness this – perhaps recent online shaming of those taking insensitive photographs at Auschwitz has had some effect – but I did see the evidence of plenty of disrespectful behaviour. The people who hadn’t even considered switching their phones to silent mode, meaning that every so often a jarring ringtone blared out in the buildings of Auschwitz I. The signs in the gas chamber at Auschwitz I, asking visitors to remain silent in respect for the thousands who lost their lives right where we stood; the horror of it hung in the walls, and yet people had to be reminded to be respectful. And all of the graffiti scrawled over the wooden bunks in the barracks at Auschwitz-Birkenau; I just cannot fathom how any single person would think that would be an appropriate thing to do there, let alone the sheer number of people who seemingly had.

Perhaps even more bizarre than the disrespect shown by some visitors, was the apparent indifference displayed by many more. People walked around chatting with their companion about everyday things, about where they’d go for dinner that night. Two other solo travellers in my group had bonded on the bus and were laughing at each other’s anecdotes as we moved through the camps. People snapped a photo of something then moved on, without really stopping to look at it, to take it in. It really did seem like this was just another thing to tick off the list on a trip to Europe or Poland, and Luka, when I asked him how he felt about the numbers of tourists coming to see the camps, echoed my thoughts. He wanted to share the story of what had happened there with visitors, so that they would really understand the horror of it, but he was troubled by the lack of respect that he witnessed every day.

Despite the large numbers of people, not all of whom treated the site as they should have, I found my visit to Auschwitz I and Auschwitz-Birkenau powerful, intense and heartbreaking. I would have liked to spend longer looking into the eyes of the prisoners in the photographs, really making sure I saw them, and stopping to just take in the reality of where I was, which wasn’t really possible with the amount of other visitors, but it didn’t detract from the impact that the experience had on me. This is recent history; it happened just a few decades before we were born. And if we’re not careful, something similar could very easily happen again. This is why it’s important to visit places like Auschwitz; so that you come away determined that you will do whatever you can to prevent a repeat. The more of us decide that, the more likely it is that we can try to make our world a better, kinder place for everyone. Do go to Auschwitz-Birkenau, if you get the chance. Do go and experience it for yourself. But please remember it’s not a tourist attraction; it’s a place of horror and death from which we need to learn.