Hiroshima: an afternoon in the city of peace 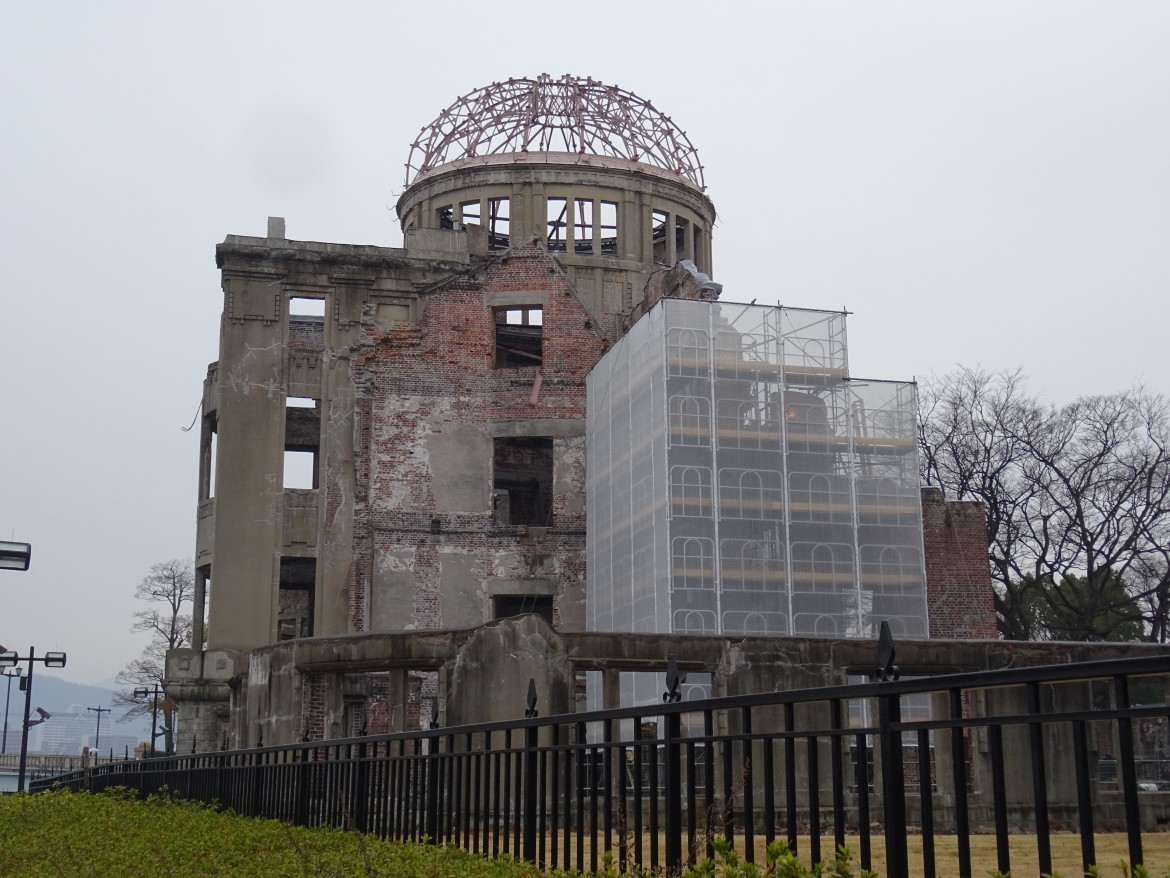 Hiroshima was a late addition to my Japan itinerary. I decided that I couldn’t miss it out, especially as it was sort-of on the way to Kagoshima from Tokyo, but I would only be staying one night, so I had a lot to fit into one afternoon (and maybe a bit of morning). My plan was to leave Tokyo very early on the shinkansen, arrive in Hiroshima around lunchtime, dump my backpack at my hostel, and then head out to see all that I wanted to whilst I was there.

The plan worked well; the trains were as usual running on time, and the excellent hostel I was staying at (K’s House Hiroshima – highly recommended, I would have happily stayed there longer) provided perfect instructions for the short walk from the train station, stored my bag securely whilst I was out, and gave me a very helpful map to navigate the city.

It was a miserable day; grey, cold, windy and throwing it down with rain. It seemed appropriate for the things I expected to encounter that afternoon.

Walking through the modern day city, it looked just like any other, apart from the old streetcars which clanged their way along the tramlines every so often. I recalled something I’d read or seen somewhere, that 24 hours after the atomic bomb was dropped on the centre of Hiroshima on August 6th, 1945, the people of the city had the remaining streetcars up and running again; when you think about what happened and how massive and devastating it was, that’s fairly amazing. After about thirty minutes, I reached the Hiroshima Peace Memorial Park. With the rain unrelenting, I began my visit by heading into the Hiroshima Peace Memorial Museum. The entrance fee was a mere 50 yen (around 30p) and, although some of the exhibition areas were closed for renovation, there was still plenty to see…and harrowing it was. I have never seen artefacts like these in any other museum anywhere else in the world; pieces of clothing and singed hair and fingernails cut from burnt children, along with a profile of who they were and how long it took them to die from their injuries. At the time, the government had drafted teenage students into work at demolition sites creating firebreaks in case of aerial attacks; most of these sites were close to where the bomb was dropped, and so many children were among the first to die. It was heartbreaking to see case after case of tiny charcoal-tinged tunics, bags and shoes. Feeling sad and shaken, I wrote my message in the visitors’ book at the exit, and headed back out into the rain to look around the Park. At the front stands the main monument and fountain, a memorial to everyone killed and affected by the devastation of the bomb.

I wandered further along the path, in search of the Children’s Peace Monument, which I soon found. I have never forgotten a story we were told at primary school, about a little girl from Hiroshima called Sadako. Aged two when the bomb was dropped, she appeared unaffected until a few years later when she developed leukaemia. Following a Japanese traditional belief that if someone folded one thousand origami paper cranes, they would have a wish come true, Sadako set about folding the birds from her hospital bed, wishing to get well. By the time she died, she had made around twelve hundred, some of which are displayed in the Museum.

After Sadako’s death, the Children’s Peace Monument was built, to remember all of the children lost to the attack. To this day, visitors come from all over the world and bring origami cranes to add to the touching display sitting next to the statue of the little girl (having tried and failed before arriving in Japan to fold a good crane, I decided not to attempt to add one!). The weather was getting worse, so I moved on to find the A-bomb Dome, a little way along the river. This is the remains of what was the Hiroshima Prefectural Industrial Promotion Hall; some of the building, including the warped frame of the domed roof, survived the blast, and has been left there as a symbol of peace. It’s a UNESCO World Heritage Site too. It was surreal to see, and also a powerful reminder of what happened there. I headed back the hostel in the rain via Hiroshima Castle; not the original building, which was completely destroyed when the bomb hit, but an exact replica, but my thoughts were still in the Museum and the Park, and for the rest of the evening I remained in a sober and reflective mood. Reminders of the horror that occurred in Hiroshima in 1945 are all over the city; from the artefacts in the Museum and the memorials in the Park, to plaques on trees noting that they survived the blast, to signs around the streets and buildings stating how close to the centre of the bomb drop they were. However, there is also an emphasis on peace throughout Hiroshima; from the names of the Museum, Park and the Peace Boulevard near the river, to the flowers adorning the edges of what seemed like most of the main streets. There must be anger and sadness there too, surely, but to me the essence of modern-day Hiroshima was overwhelmingly peace; the sense that this must never happen again.

I’m a great believer in the importance of knowing and understanding history, in order to make sense of the world in which we live now, and how to proceed and not to proceed in the future. Visiting Hiroshima brought a devastating chapter of history to life for me in a powerful way which I will never forget.