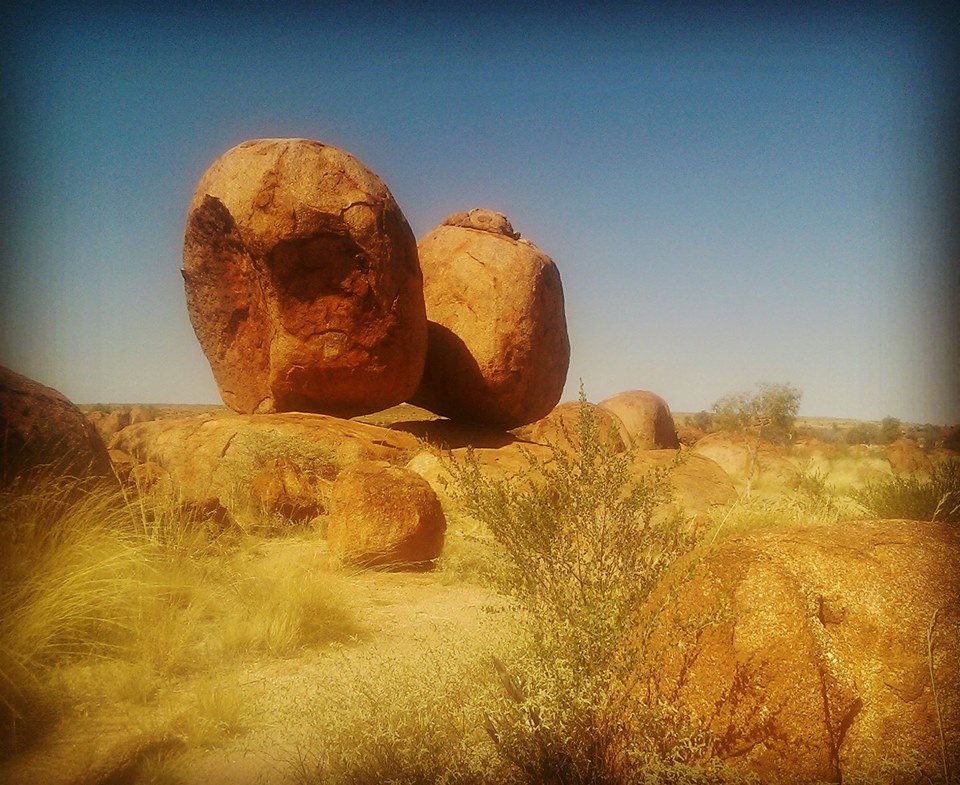 After my magical experience of journeying to the heart of Australia, my thoughts turned northwards. My research had thrown up some spots which I was keen to visit on the way to Darwin, the capital city of the Northern Territory, where I hoped to stay for a while to enjoy the tropical climate and find some temporary work.

I had intended to make this journey by myself, using the Greyhound bus and making stops, but I found very little in terms of hostels along the way, and my budget for this trip wasn’t going to stretch to motel rooms. Most people travelling through the Northern Territory rent a car or van and sleep in their vehicle, which wasn’t an option for me, and so it was back to the internet to search for a tour group to join. I managed to find a two-day Alice Springs to Darwin trip with Mulgas Adventure Tours which hit the exact places that I wanted to visit, and included an overnight dorm stay, for pretty much the same price as the Greyhound bus ticket would have cost me, so I immediately booked this bargain.

It was another very early and very chilly start in Alice Springs when Ray arrived in his bus to pick us up and begin our journey north. We soon hit the Stuart Highway, and pulled over once the sky was brightening, to watch another of those desert sunrises over the red scrub. It was then onwards to our first highlight of the trip; Karlu Karlu, or the Devil’s Marbles. As you may have gleaned from my previous post, I am very much a fan of big rocks, and these huge granite boulders spread over the landscape did not disappoint. Karlu Karlu translates to “round boulders”, and for the local Aboriginal people, this site is sacred. Several of the Dreamtime stories which are permitted to be shared with non-Aborginal people describe its formation; one version is that the rocks are the eggs of the Rainbow Serpent, and another story tells of the ancestor Arrange dropping balls of hair on the ground which became the rocks. Allegedly the ancient rock formation got its English name from a European shepherd, who stopped there overnight with his flock and, waking to find them all dead (most likely from eating a poisonous plant), deemed the area to be the domain of the devil. It was a stunning landscape to explore, although, as at Uluru, I was disappointed to see other tourists (not with our group, thankfully) scrambling to the top of the boulders for photo opportunities despite the many signs asking them not to due to their cultural and spiritual significance. After leaving the giant rocks behind, today was mostly a driving day – with 1500 kilometres (930 miles) between Alice Springs and Darwin, there’s a lot of ground to cover. Ray did make sure to stop at Wycliffe Well, a town which is apparently the UFO capital of Australia, for us to look at the newspaper clippings plastering the walls of the local roadhouse detailing the many mysterious sightings and events that have occurred in the area, and to pose for some silly photos with the green alien statues dotted around outside, before we continued northwards to our overnight stop at the Daly Waters pub. This 1930s pub is where everyone stops along this route, and according to their website, in its earlier days “the pub has witnessed murders, shoot outs in the main street, cattle stampeding through town and the odd drunken brawls”. It certainly had a character and an atmosphere about it, with memorabilia lining the walls left by the many travellers who have passed through. Dinner was included in our tour price, and after a long day out on the road I enjoyed my veggie burger and chips with a couple of pints of cider whilst we watched the local musicians playing in the packed-out courtyard. I slept well in one of the basic but clean and comfortable dorm rooms at the pub, before another early start for the second and final day of our journey. Our first stop of the morning was a swim in the Mataranka Hot Springs. These pools at the Mataranka Homestead are heated naturally by the sun (not geothermally – no volcanoes here!) and I can’t think of many better ways to begin a morning than taking a dip in these beautiful warm waters, listening to the birdsong and spotting wallabies hopping tentatively out from amidst the trees. There were a few signs dotted around warning visitors to be aware of crocodiles, but Ray assured us that as it was the dry season, with no flooding there would be none in the area. We all could have happily stayed longer floating around in the pools, but we were on a schedule to make it to Darwin by evening, so we dragged ourselves out and back onto the bus to continue. We could really see now how the landscape had changed; the red sand and scrubby bush of Central Australia had given way to leafier trees reminiscent of rainforest scenery as we had entered the tropical north of the country.

A couple of hours later we stopped in the town of Katherine for an early lunch, seeking shade under the trees along the side of the main road into town; the thick, heavy tropical heat was most definitely upon us now. Happily, there was another chance to cool off at our next stop at Edith Falls in the Katherine Gorge at Nitmiluk National Park, around 60 kilometres north of Katherine. Here a short and easy hike over the rocks rewarded us with some gorgeous natural pools at the base of the waterfalls which are safe for swimming. It was the ideal spot to float around enjoying the sun, the water and the stunning scenery. (This is probably a good point to warn any readers thinking of exploring this area to always seek local advice before swimming in bodies of water in northern Australia; crocodiles are a very real and present danger in this part of the world, and it is essential to check whether it is safe to go in – please don’t make any assumptions!)

Dried off and refreshed from our dip, it was now time to head onwards to our final destination. It was a somewhat strange feeling to stop at our first set of traffic lights in two days, as the cityscape appeared on the horizon! By early evening we had been deposited at our various accommodations on and around Darwin’s lively Mitchell Street.

Darwin was hot, rough and noisy, and totally unlike any of the other state capitals. Even the hostel that I stayed in, one of the normally peaceful YHA-branded properties, had a bit of a party vibe, with a popular rooftop bar. Despite missing the calm that I was hoping for from my choice of accommodation, I very quickly developed a special affection for the chaotic, sticky-hot city, and began to look for some work. In between searching for jobs, I enjoyed taking walks along the esplanade, looking out over the calm harbour waters still hiding sunken warships from the attacks of World War Two, and along the beachfront of Fannie Bay, looking for crocodiles. With the water unsafe for swimming, there is a man-made lagoon at the waterfront filled with filtered sea-water which is a pleasant spot to spend a few hours. One of the highlights of any stay in Darwin is surely the Mindil Beach Sunset Market which takes place every Thursday and Sunday during the dry season; tucking into some delicious vegan Indonesian food whilst watching the sun set over the beach was the perfect way to spend an evening. I also took a day trip out to Kakadu National Park, the largest National Park in the country which, on reflection, really warranted several days to explore. This was my first opportunity to spot crocodiles – the saltwater kind, known as ginga in the local Aboriginal language (after the first crocodile from the Dreamtime) – during a fantastic billabong cruise directed by an Aboriginal ranger who knew the land and the creatures within it inside out. As well as the awe-inspiring sight of crocs, we saw wild horses (descendants of those who were used for buffalo-hunting and other activities many years ago, and lost or abandoned when these activities ceased), and many beautiful birds. Can you spot the croc? My job search in Darwin was unfortunately proving unfruitful however – it was coming up to the beginning of the wet season so tourism was starting to die down, and with that, hospitality work opportunities – and so I decided it was time to drag my jeans and cardigan out from the bottom of my backpack, and book a flight to Sydney to try my luck in the Big City…