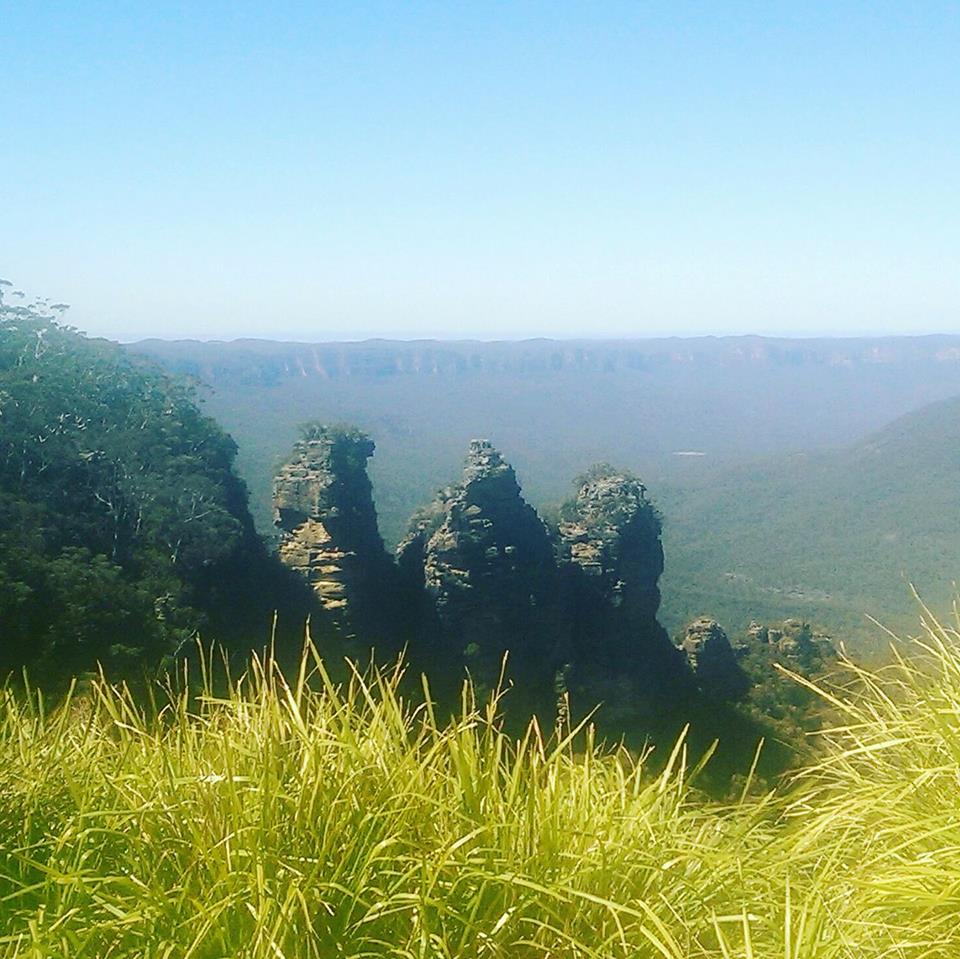 It turned out to be exactly one year to the day that I first arrived in Australia when I touched down in Sydney on an overnight flight from Darwin after an epic journey through the Northern Territory, beginning my second year Working Holiday Visa with a round of job interviews and finding a temporary role within a few days.

There is plenty to see in Sydney of course, and I particularly enjoyed walks along the harbourside taking in the views of the Opera House and the ferries, hanging out at Bondi Beach (even though it was still too early in the springtime for a swim) and the windy Bronte to Tamarama coastal walk. At Bondi Beach…the best-placed swimming pool in the world?

However, when I had a couple of days off I decided to get out of the city and go experience the famous Blue Mountains, just outside the western suburbs.

Being only two hours on the train from Sydney’s Central Station, the Blue Mountains can be visited as a day trip, but I decided to stay overnight so as not to feel rushed. I boarded the train fairly early on a Sunday morning, expecting it to be quiet but finding that many others had the same plan – perhaps because it is cheaper to travel on a Sunday when the Opal fares are capped (you can use an Opal card – the travel card used for public transport in Sydney – all the way to Katoomba), and probably also because it was a holiday weekend. However, I managed to find a seat and enjoy a comfortable trip for the next couple of hours.

Stepping onto the platform at Katoomba, the air was most definitely crisper and cooler than that of the city; it felt overwhelmingly cleaner! I grabbed some coffee and a late breakfast/early lunch in one of the little cafes lining the town’s main street, before heading off to explore.

There are plenty of tours operating in the area, but I found it was very easy to find and follow the short walking trails independently (if you’re planning to embark of one of the multi-day hikes in the area, please do make sure that you take local advice and that you know what you’re doing!). There are many different options at varying difficulty levels, and all of the signage makes it clear which paths are which. It’s only a 20-minute walk from the town centre to the cliff edge of Echo Point, where you can soak up some stunning views of the Three Sisters rock formation and acres of rainforest below. From here I followed the cliff walk, enjoying the scenery of the valley and the rocks sitting underneath the misty blue haze which gives the area its name. While I had realised on the train ride out here that it would be a busy spot, I had no idea quite how many tour buses would be turning up and disgorging huge groups of tourists eager to take hundreds of photographs at every viewpoint! I spent a fair amount of time queuing (I am British) for a space at the ledge to grab a picture; next time I’d probably try to go during a quieter time!

That afternoon I had intended to visit Scenic World to ride the cable cars that I had seen floating overhead during my walk, but the aforementioned popularity of the Blue Mountains today meant that I would have had to wait until the final session of the day to get in, so I bought a ticket for the next morning instead, and headed back to my hostel, the very cosy Blue Mountains YHA to relax in one of the armchairs in front of the log fire in the living room with a few glasses of wine.

The next morning I set off bright and early to walk down to Scenic World in time for opening, to hopefully beat the crowds a little. First, I took the Scenic Skyway, an aerial cablecar which soars over the valley offering spectacular views through the glass walls and floor (there is a non-glass section of floor too, for any nervous riders!). At the other end, there are a couple of paths to choose from, leading down to look-out points to enjoy before hopping back on for the return trip to the main terminal.

Next up, I was excited to take the Scenic Railway, the steepest passenger railway in the world, with its 52 degree incline. Prior to becoming a theme park in 1945, this site in the Blue Mountains had been the home of a coal and shale mine. The railway was used for transporting workers to and from the mine, but someone had the idea of opening it up to the public at the weekends, allowing them to pay a small admission fee to experience the thrill of the ride! When the mine closed and the park was developed, the Railway was developed further too, on the original incline. The 310 metre descent to the rainforest floor is short, quick, and very much akin to a rollercoaster ride! Deposited amongst the trees, I then took to the Scenic Walkway, an elevated boardwalk which keeps visitors from trampling the delicate environment, for a gentle 40-minute round walk through the rainforest, before hopping onto the Scenic Cableway for a cable-car ride back up to the top. While I’m not usually a fan of theme parks, I very much enjoyed the views that the rides afforded, and the novel experience of the railway, so I felt that it was worth the ticket entry price (currently $37 for an adult).

My twenty-four hours in the Blue Mountains over, I headed back up into town to take the train back into Sydney. It’s hard to believe that the huge swathes of rainforest and stunning rock formations around Katoomba are only two hours away from the chaos of the city; it’s most definitely a refuge that I would recommend to anyone wanting to get away for a day or two.