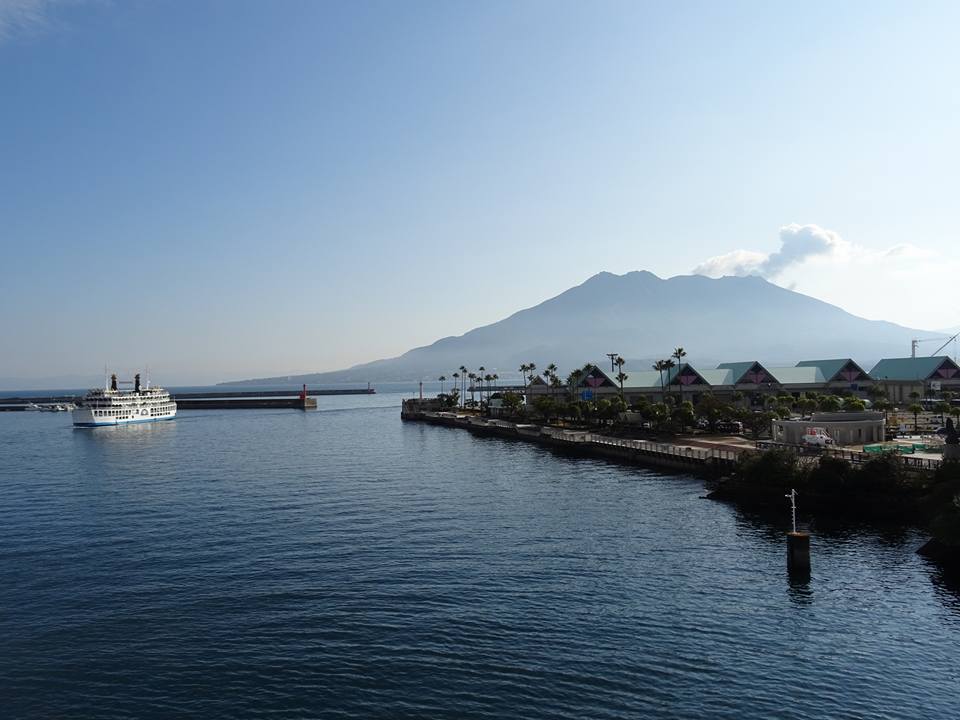 After Tokyo and Hiroshima, it was time to take the shinkansen all the way down into the south of Japan, to the port city of Kagoshima. Having now been there, I can’t recommend this as the most exciting place to spend a few days, but my reason for coming was sitting across the bay: Sukurajima, one of Japan’s most active volcanoes, and the first one of my trip.

It puffs out white and grey clouds of steam and ash daily, and erupts regularly; although, as is typical, it was very quiet for the whole time I was there! Erupting or not, it was still a magnificent sight with which to be greeted every day. To get a closer look and to explore the area further, visitors can take the short ferry ride over to the island, something which I did twice during my stay. I call it an island – and indeed, the “jima” of its name suggests that – but after a major eruption in the 1940s it is now connected to the mainland by a small strip of newly-formed land. However, the ferry from Kagoshima is still the quickest, easiest and most popular way to get there.

The ferries run 24 hours around the clock and depart every 10 or 15 minutes from the terminal near Dolphin Port. I managed to get there early for the next crossing, and so bagged myself a good spot on the top deck to watch the volcano growing closer on the 15-minute (bracing!) journey over the water.

There’s not much by way of public transport on Sakurajima; the options for visitors are essentially to bring a rental car or bicycle over on the ferry, or to use the Island View hop-on-hop-off tourist bus. Initially annoyed that I hadn’t thought of the bike idea (then later somewhat relieved, having seen some of the hills to be climbed!), I headed to the Port bus stop to pick up a day pass for the bus, costing 500 yen (around £3).

I made my first stop at the Sakurajima Visitors’ Centre. Here there was a small exhibition on the history of the volcano and its major eruptions. The wannabe volcanologist in me enjoyed the live seismograph readings of the mountain displayed there too!

Outside I found one of my favourite things about Sakurajima – the volcanic footspa! Water heated by the geothermal activity beneath the ground runs through a trench lined with benches, and it’s free to use; there can surely be few better ways to spend a morning than enjoying a (very!) hot footbath on a sunny day, watching the boats crossing the bay and the volcano gently smoking. When I finally dragged myself from the footspa (pro-tip: don’t wear skinny jeans for this if you plan to sit there a long time. Your legs will swell and it will take you ten minutes to wrench your jeans back over your calves, whilst trying to pretend that nothing is wrong), I set off a little way down the lava trail which lines the coast. I only walked a very short way as I wanted to get on the next bus, which was due, but what I saw was enough to make me come back another day to walk the whole path (both the Visitor’s Centre and the lava trail are within walking distance of the Port). This area is designated a “Geopark” and a National Park, and it makes for a beautiful walk along the sea, the shore lined with dramatic black rock formations.

The trail is about 2.5km long and it is worth walking the whole way; towards the end you are rewarded with some stunning views of the volcano with blue water glittering beneath. The end point of the trail is Akamizu View Park, also the next stop on the bus, which waited for a few minutes whilst we admired the mountain and took photographs. It then went on to stop at the Karasujima Observatory and the Yunohira Observatory; both offering spectacular views, and the latter being the closest that the public are currently allowed to get to the active volcano. I had managed to pick a clear and sunny day for my visit (for both of my visits in fact) and the vista was perfect. The bus then returned us to the Port, from where I walked back to the Visitors’ Centre for another dip in the footbath before heading back over to Kagoshima.

Along the way I noticed crates periodically lining the road; upon closer inspection, these contained bags of little mandarins, with a sign requesting 100 yen and an honesty box. I recalled reading that the smallest mandarins in the world are grown here (also the largest radishes in the world, which can be seen in the shops in Kagoshima. They’re pretty big, but I didn’t buy one of these, so you’ll have to trust me on this one. Or Google it) and bought a punnet. They were a delicious accompaniment to my days out for the rest of my stay. I may not have caught Sakurajima erupting, but it was still fascinating to be so close to an active volcano and to be able to see and feel the evidence of the constant geological activity occurring there. Should you ever find yourself in Kagoshima, make sure to spare a day to go and experience it for yourself.

UPDATE: The day after I left Kagoshima, just as I was about to hit publish on this post, Sakurajima decided to spectacularly erupt – just my luck!