Buried alive in volcanic sand: a spa with a difference in Ibusuki 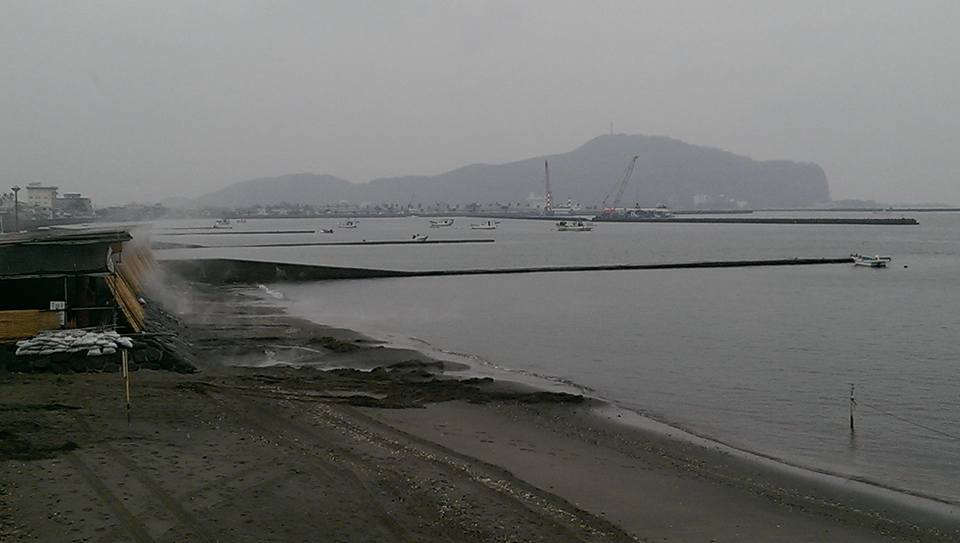 Sometime last year the BBC aired a short documentary series called “Japan’s Enchanted Islands”, and one episode centred on the southwestern islands and their gateway, the Kagoshima area. It showed how the people there adapted to the constant geological activity, featuring the hot sand baths in Ibusuki, where guests are buried in the volcanic sand on the beach. It’s supposed to have multiple health benefits and is popular with locals and tourists alike.

I immediately decided that I must try this myself when I visited Japan and so, after exploring Sakurajima, I made this my next mission.

Ibusuki is a 90-minute ride by local train from Kagoshima-Chuo, the main station in the city. When I arrived, however, there was an express train which completed the journey in 55 minutes waiting to leave, so I hopped on that and into a carriage that didn’t look like your regular train – the seating was arranged in a more casual dining fashion, and there were children’s play areas throughout. This is apparently a special service laid on for tourists – there were plenty of families enjoying the slightly bizarre journey – and can be used with the JR Rail Pass, but you are supposed to reserve a seat; having not done my usual check on Hyperdia to see whether the trains had unreserved seat options, I didn’t realise this, but luckily the ticket office clerk at the other end let me through! I grabbed a map from the information desk at the station and headed out into the rain. Outside I spotted another one of those volcanic footspas like they have at Sakurajima, and I decide to have a dip while I waited for the rain to stop. I’m now firmly of the opinion that all stations should have one of these – it’s a very pleasant way to relax after a journey! The weather wasn’t getting any better however, so I just had to brave it (before a repeat of the leg-swelling/skinny jeans incident from yesterday!). With the map it was a straightforward walk to the baths, taking around twenty minutes I think, with plenty of signs pointing the way. Soon I caught sight of the beach, with steam rising from above the canopies set out over the spa.

The sand bath is attached to a regular hot spring bath like those found throughout Japan – an onsen – and with the entrance fee (around 1000 yen with 200 extra to rent a towel) you can use the baths too – though I can’t imagine who wants to after that hot sand!

The receptionist handed me my yukata – a kimono robe that you wear to protect your skin from the heat of the sand – and I got changed and walked out to the beach. With it being a soggy day in January, there wasn’t a queue, and I was called over straightaway. One of the diggers arranged the towel around my neck as I lay down, and then they began shovelling sand over me. Within seconds I was buried up to my neck The digger pointed to the clock – “ten minutes, OK” – and left me to it.

The sand was indeed very hot, and heavy, and it felt like my body was pulsating beneath it; but I found the heat and the weight very soothing, as I lay there, listening to the steaming waves hitting the shore a few feet away. The ten minutes went by very quickly, and I could have stayed longer, but the official advice is ten minutes only, and I was starting to feel a little burn on my elbow even through my yukata, so I threw up my arms and freed myself, heading off to get showered and changed.

It’s important to note here that I have a big tattoo from wrist to elbow crease on my inner forearm, and that tattoos are not cool in Japan. They are associated with the Yakuza, the Japanese mafia, and most onsens and some hotels have a ban on guests with tattoos. For this reason I was unsure whether to go to Ibusuki or not; I reasoned that the robe would cover my arm, but I also knew I would be getting changed in a communal area and that I would be naked in the shower area (hot spring baths are used naked in Japan, with separate baths for men and women). In the end I decided to look at the signage; if it said that tattoos were not allowed, I wouldn’t chance it and risk causing offence, but if it didn’t, I would go in for the sand bath only, avoiding the onsen. In the end there was nothing in the rules about tattoos, and I was indeed able to cover it with the robe, then by draping my towel over my arm in the changing room and hot baths (you need to pass through them even if not using them to get back to the changing area), and luckily there was no one else showering when I was, so I was able to enjoy the sand bath without potentially upsetting anyone.

It may seem a long way to go and a pricey entrance free for a ten-minute experience, but I thoroughly enjoyed it and would go again. I can’t say I’ve noticed any health benefits yet, but it certainly was relaxing at the time, and something a little different to try out on my travels.