Blue fire and sulphur mines: the world of Mount Ijen 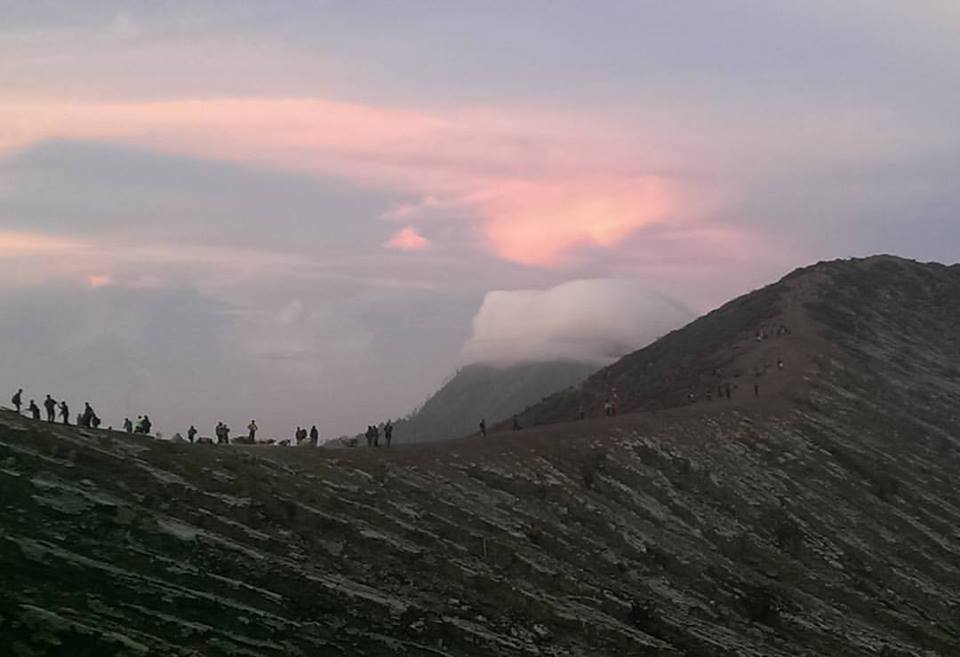 I never imagined I’d be happy to see Jakarta, but when the plane from Singapore touched down at Soekarno-Hatto airport, I felt glad to be back in Indonesia, and excited for the adventures to come. The immigration officer, glancing briefly at my passport’s departure stamp from only a few days previously, half-heartedly asked me how long I was going to stay and what I intended to do while I was here, and then I was through the gate and back into the country that has become my favourite so far.

First up on the to-do list was Kawah Ijen, all the way back over in East Java. At this point I wished I’d been a bit more organised during my first visit to Indonesia, as I now faced a mammoth trek; the next morning I took a flight to Malang, then a nice, comfortable air-conditioned bus to Probolinggo, then a not-so-nice, non-air-conditioned bus, where food sellers and buskers climbed on every 15 minutes or so, to Bondowoso, finally arriving in this small town around 5pm.

I, like many people, first heard of Ijen when National Geographic ran a feature on it a couple of years ago, highlighting the stunning blue flame produced at night by the sulphuric gas emitted by the volcano. Obviously I added it straight onto my list of must-sees, and finally here I was.

Most people see Ijen as part of a tour after seeing Bromo, but you can also make your own way to Bondowoso or Banyuwangi (the latter being the better option if you’re taking the ferry over to Bali afterwards) and stay in a homestay who will arrange a trip to Ijen for you. I chose Ijen Bondowoso Homestay who were brilliant, picking me up from the bus terminal, taking me to the volcano, and then putting me on the bus to Surabaya the next day.

By now I was used to getting up in the middle of the night to trek a volcano, but Ijen was the earliest start by far. In fact it wasn’t even worth going to bed, as we headed out at around 11.30pm for the two-hour drive to the mountain; to catch the blue fire you need to be in place well before the sun even thinks about rising. Before we left, Hadi presented me with not only a facemask, but also a full-on gas mask, at which point I realised that this was most likely going to be one hell of a volcano!

Once there, I joined with a couple who had also just arrived to hire a local guide to lead the way up – it’s possible to go alone, but at 1.45 in the morning and with my sense of direction, there was no chance I was trying it!

The path is only three kilometres, but it’s a fairly tough one, on a steep incline most of the way. After perhaps an hour of slow walking, our guide stopped and motioned for us to put our gas masks on, and I realised that we were at the top of the crater. A few metres later and he stopped us again and pointed out into the blackness, where we could just make out a flicker of blue.

Worried this was it, I asked if we would go closer.

“Yes”, he replied, looking bemused that I would even ask, and began to lead us on the scramble down into the crater. It wasn’t long until we met a figure coming up; climbing slowly and deliberately, with two baskets, filled with luminous yellow rocks, hung on either side of a pole balanced across his shoulders. A sulphur miner; one of the men who spends their nights extracting sulphur from the crater. As he inched past us, our guide murmured a greeting and then told us that the load the miner was carrying could weigh up to 70 kilograms. Struggling to keep my footing on the slippery rocky path, I couldn’t even fathom coming up the other way with such a heavy weight to carry.

That familiar smell of volcano was beginning to penetrate my gasmask as we got closer, and with one sharp turn downwards, we were face-to-face with what we’d come here to see; blue flame streaking into the night from the massive cloud of sulphur belching from the crater. The air was filled with the clanging of tools and the hacking of coughs as the miners, who work with at most a scarf tied around their face to protect themselves from the poisonous fumes, went about their business. Our guide led us up into a large rock where we could perch and, shivering in the bitter night-time cold, watch the spectacle. Sadly none of my photographs of the blue flame came out properly – I really need to learn how to use the settings on my camera! – but my memories of the scene are firmly ingrained in my mind.

As the sun came up, the blue flame died away, but the miners carried on working, as the highly acidic crater lake came into sight, the sulphur cloud still billowing away into the sky. I can safely say that my long-awaited visit to Ijen did not disappoint, and it was completely worth the long bus journeys, lack of sleep, tough trek, and feeling like I might die of cold at the top (bring a warm coat if you’re coming to Indonesia to do any of these pre-dawn trips). The blue fire and sulphur mines made it a slightly surreal experience which was just that little bit different to any other volcano I’ve visited before or since.