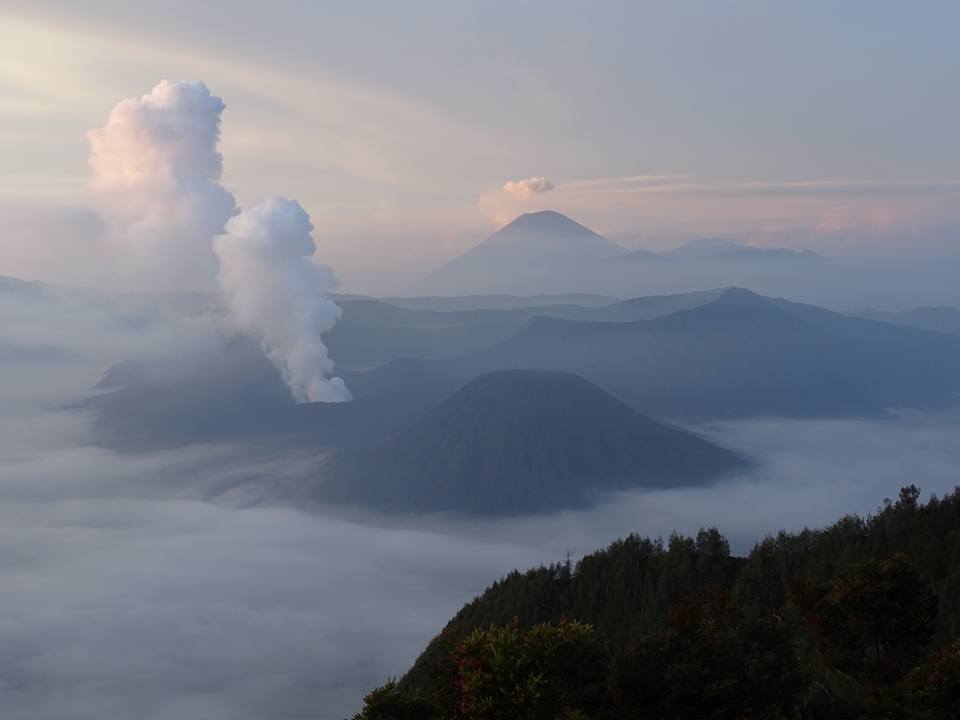 Two months into my Asia trip, and by now I’d seen a fair few volcanoes. I was yet to find that Holy Grail however; a big bad beastie in full eruption swing (thank you again, Sakurajima, for waiting for me to leave before doing your thing!). So when I dragged myself away from beautiful Bali onto a flight to Surabaya in Java, the land of famous volcanoes, I was hopeful that my moment might be going to arrive soon.

As soon as I arrived in Surabaya, I arranged my onward trip to see Mount Bromo, a volcano in East Java which is a popular spot to visit. This entailed taking the public bus to Probolinggo, a journey of about two and a half hours, where we were picked up by the tour company and taken up into the hills to Cemoro Lawang, where we would stay that night. The air was damp and mist was settling around the rice fields as we took an afternoon walk along the village roads; this peaceful, green little stopover was a welcome break from the city. It was a 3am wake-up call to begin our journey to Bromo the next morning. The first part of the trip was the famous sunrise viewing of Bromo and Semeru, another active peak. This was a much easier trek than Batur had been, as a jeep took us almost the entire way, via a very bumpy dark ride. By the time we arrived at the viewing point, sometime around 4.30am, it was already packed out with people taking up position against the rails with tripods and cameras set up. We managed to squeeze into a spot to hold for photograph-taking when the sun appeared.

It was a chilly wait. We’d been warned that it could potentially be freezing up there. I hadn’t really brought any warm clothes, so I’d layered on anything I had in my backpack that could help; several t-shirts, the lightweight jacket I’d brought with me for Australia later on in the year, the scarf I’d brought for temple-visiting, and my jeans and gloves which I luckily still had from spending January in Japan. It was just about bearable, but by the time the sun had come up the cold had seeped into my bones, and I wished I’d had a thicker coat with me!

Just as atop Batur, there were a few flashes of lightening over the mountains, and then sunrise came quickly, black slipping into a kind of blue, illuminating an other-wordly landscape of multiple volcano peaks, Bromo puffing away heavily into the dawn sky. It was a magical sight, but my attempts to enjoy it in peace were thwarted by a steady stream of requests for photographs and selfies with local visitors. This is a common occurrence as a Western traveller in Java, and I’ll freely admit that the novelty is wearing off and I am finding it frustrating now, especially when it happens at times like this. However, I posed, smiled, and then politely requested that I be left alone to enjoy the view and to take my own pictures, which I eventually was.

The sun risen and the visitors dissipated, we headed back to the jeep to drive to the crater of Mount Bromo. I wasn’t expecting to get very close, as the owner of my hostel in Surabaya had told me that the area was closed because the volcano was so active, but our guide informed us that the crater had re-opened just one week previously. Soon I would discover how lucky I had been to catch the volcano at just this point.

After a ride over a moon-like grey, rocky landscape, we were deposited at the bottom of the peak. Looking up at the giant pillar of steam and ash that was steadily puffing into the sky, I couldn’t quite believe we would be allowed to go up there. But sure enough, I could make out some tiny figures at the rim, so off we went. It was a short climb – only about 30 minutes and via steps rather than rock – but a steep, fairly tough one. The air was thick and hurt my lungs and I had to stop several times to catch my breath and rest my aching calves, and as we neared the top, the ground became slippy with wet ash underfoot. As we climbed, the now-familiar rotten-eggs smell of volcano came over, and we began to hear the rumbling of the mountain, something I have never heard before.

One final push upwards, and we were there; standing at the crater rim of a very active Mount Bromo, as it growled and belched out fat clouds of ash and steam. I was watching a volcano erupt, and doing so up close; a lifelong dream fulfilled. I felt something wet hitting my head and hands, and when I looked, I saw black drops; it was raining ash. Many of the other tourists began heading back down – “I don’t like this!”, I heard from more than one! – but I just stood there revelling in the ash that was falling into my hair, onto my glasses, all over my clothes and smearing my face with grime; I couldn’t have been happier at that point, to be finally experiencing something I wasn’t sure I’d ever get to see. I could have stayed for hours, but we had a schedule to keep to, so I reluctantly had to leave and head back to the jeep earlier than I would have liked, back to Cemoro Lawang for a very welcome hot shower and Indonesian breakfast. Later on, climbing into the van to head back to Probolinggo and then Surabaya, I still had a massive smile on my face. I hope that there are many more erupting volcanoes in my future, but Mount Bromo will always hold a special place in my memories for being the first. Now I just need to find some molten lava…