Finding some balance…and some life-changing moments: solo in Ubud, Bali 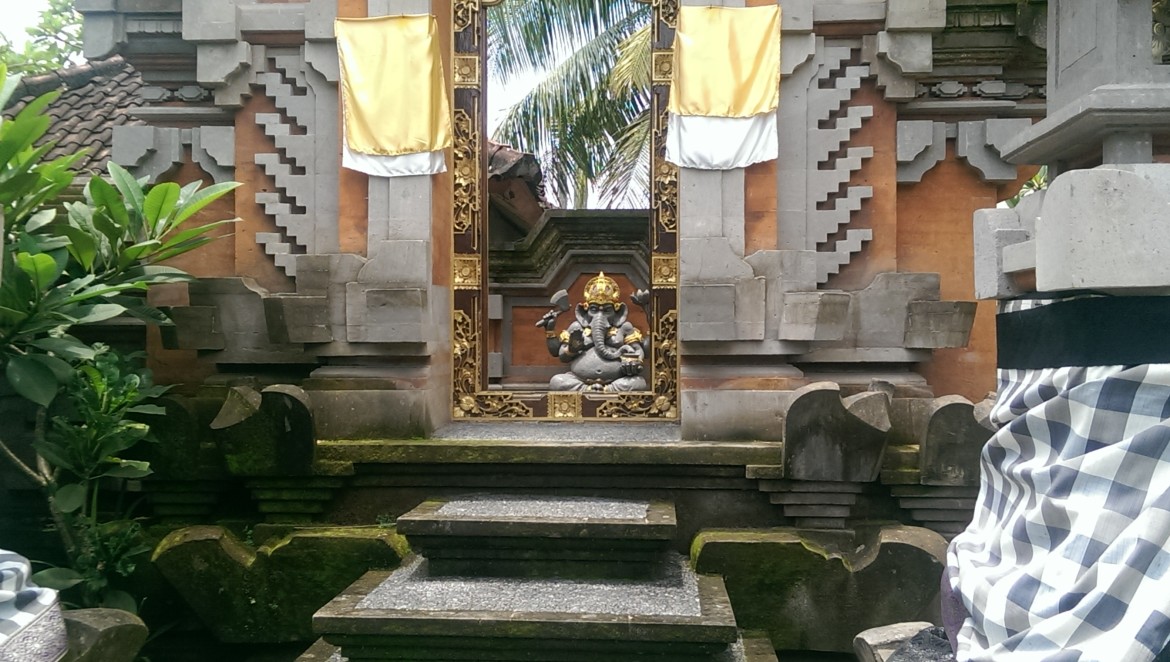 I’m still getting used to this country-hopping – going onto another foreign land rather than going home when my time somewhere is done. I’ve wanted to go to Indonesia ever since I was a child, reading books about volcanoes. As a teenager I’d use my permitted internet time (limited in those days of dial-up!) to look up volcano tours in the country. I don’t think I ever really believed I’d get there, but now here I was, waiting in Manila airport for a flight to Bali.

This was the most under-prepared I have been so far. I had three nights’ accommodation booked in the inland town of Ubud – chosen quickly over the popular beach resort of Kuta which didn’t look like my thing at all – and a plane ticket out of Jakarta for four weeks’ time, and that was it. No plans at all. On the second leg of my journey, the flight from Kuala Lumpur onto Bali, I picked up the book I’d been reading – Eat Pray Love – and began the final section of the book, where the protagonist was also on her way to Ubud. The first chapter of this section begins with (and I paraphrase) something about how she has never been less prepared for a trip than she is for this one, and I laughed out loud with the recognition. At the same time I realised that I wasn’t stressed about having done no planning, or angry at myself for being disorganised; I was excited by the prospect of what lay ahead.

I ended up spending six nights in Ubud, and I’m not exaggerating when I say that that short period of time has changed my life.

At the risk of sounding like one big cliche…something in Ubud really connected with me; it reached right into my mind and heart. I had a few moments of realisation, of understanding, of knowing things. Some of these are too personal and raw to share with you at the moment, and others, like the experience I had standing on the top of Mount Batur watching the sun rise over three other volcanoes, I want to save for their own blog post. I don’t know where this sudden sense of knowing came from. Perhaps it was from the spirituality of the place, with its temples, and the offerings left on the doorstep of every house, shop and establishment, and the growing preparations for Nyepi, Balinese New Year. I’m not religious in the slightest but I’m open to the idea that it affected me. Maybe it came from being able to relax in a place where people are genuinely friendly and don’t always want something from you. Maybe it just coincided with a point in my journey where I’d started to genuinely feel comfortable and confident in myself and the life I live now. Whatever it was, I’m glad it happened, and it’s taking me back to Ubud later this week for a few more days before moving on to another part of Indonesia. View of rice fields from my first hostel room

I spent my days in Ubud wandering around looking at the temples and the rice fields which appear out of nowhere off the main roads, eating wholesome food, trying my best to get back into yoga at the famous Yoga Barn (I highly recommend the Introduction to Yoga session, which I walked away from feeling great), haggling in the markets for things I needed to buy (going against every British bone in my body!), and seeing the sights. On my first day I couldn’t wait to get to the Sacred Monkey Forest, where monkeys roam freely while visitors try not to get any of their belongings stolen, and it didn’t disappoint; there were so many monkeys to see, including lots of babies, and it was highly amusing to watch them snatching the food that tourists purchased for them straight from their hands, as well as stealing sweets, cigarettes, sunglasses, and pretty much anything they could get hold of from an unprepared guest – one even leapt on my bag to try to wrestle my bottle of suncream out of the side pocket! Regular readers will know that I love monkeys so this was a real joy of an afternoon for me. There are plenty of tours to take from Ubud too. As I’ve said already, I’ll write about my Batur volcano trek separately, but I also took a cycling tour with the same company, which took us through the villages and rice fields outside of the town and was a lovely way to spend a few hours. However, there’s enough to see, hear and smell just wandering around the streets. Men in conical hats picking the rice. Women on their way to the temples with baskets balanced on their heads. The scent of incense everywhere, and the occasional sound of chanting rising up from somewhere. It’s truly a magical place that I can’t wait to get back to.