Haapsalu, Estonia: a holiday hotspot for the tsars and Tchaikovsky 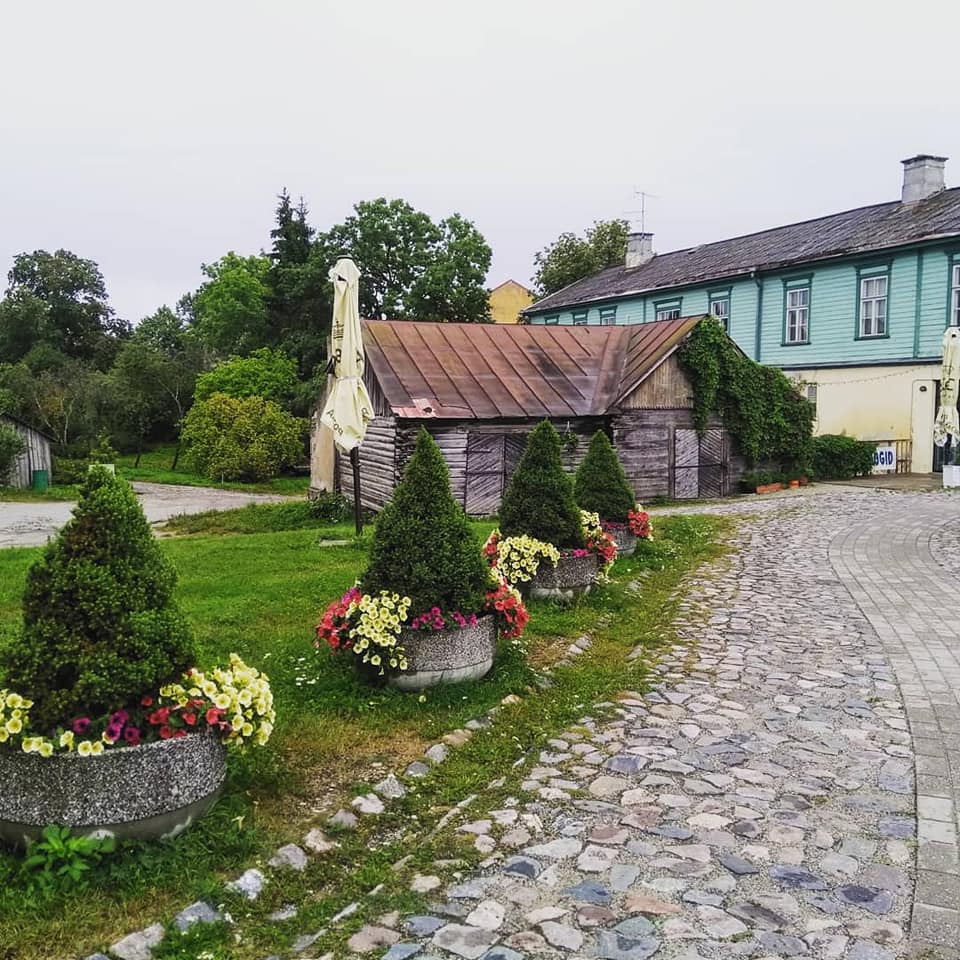 It was my final full day in Estonia, and I woke to the sound of heavy rain pummelling the road outside my hostel in Tallinn. Having already spent a couple of days exploring what the capital had to offer, and taken probably the most popular day trip from Tallinn, a hop over to Helsinki on the ferry, I decided to take a gamble on the weather out on the west coast of Estonia being a bit more amenable to getting out and about, and to hop on a bus out to Haapsalu for the day.

Tallinn’s bus station sits just outside of the Old Town – it was a 30 minute walk from my hostel, but the tram which runs between the airport and the city stops there too. It was easy to navigate and to find the right stop. I’d bought my bus ticket online, receiving a mobile ticket that I could simply show to the driver from my phone, but you can buy your ticket on the bus from the driver too. The long-distance buses going to Riga and St Petersburg looked busy, but on this rainy day there were only a handful of other passengers on my bus heading out to the coast.

It was a one and a half hour trip on a comfortable coach to reach Haapsalu, one of the oldest towns in Estonia. Founded in 1279 as a Prince-Bishop’s ruling centre, it later became famous in the nineteenth century when a doctor claimed that the local sea mud had therapeutic properties, and opened the first mud cure resort in the town. This attracted the attention of Russian royalty, and Haapsalu became a favoured holiday destination for the tsars from thereon. The bus from Tallinn stops just outside the old Railway Station, where in 1904 a 216 metre platform – exactly the length of the Tsar’s personal train – was opened. At the time it was the longest train station platform in Northern Europe and today, even though trains no longer run to Haapsalu, the regal-looking platform is still there to wander along in all of its splendour. 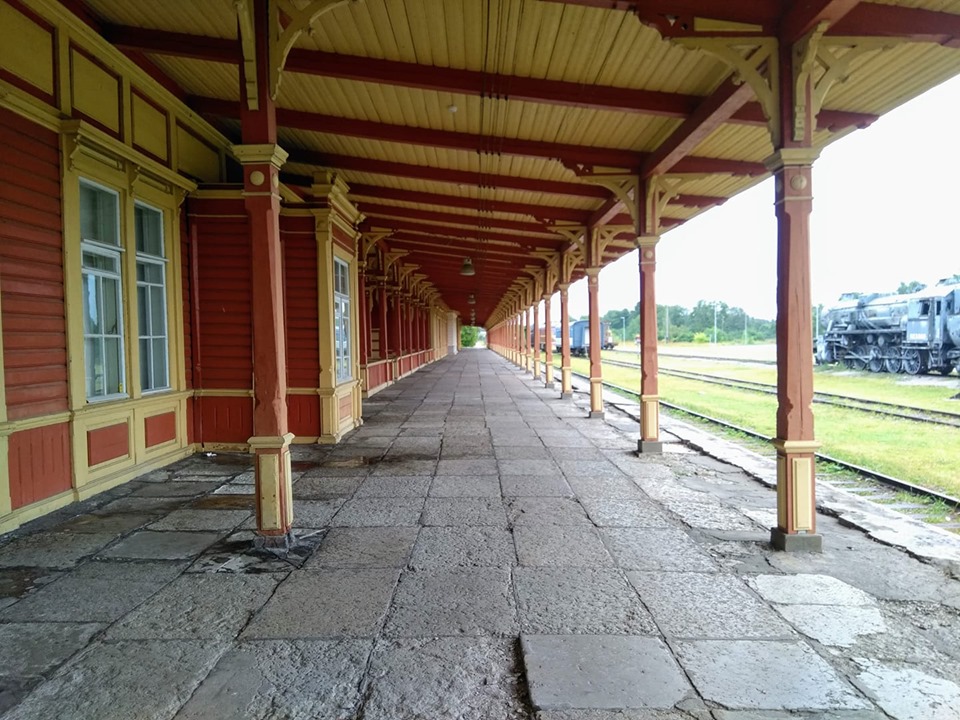 Haapsalu is small and walkable, so it didn’t take me long to find my way from the station into the centre. Along the way, and into the Old Town, I strolled along streets lined with beautiful wooden houses. 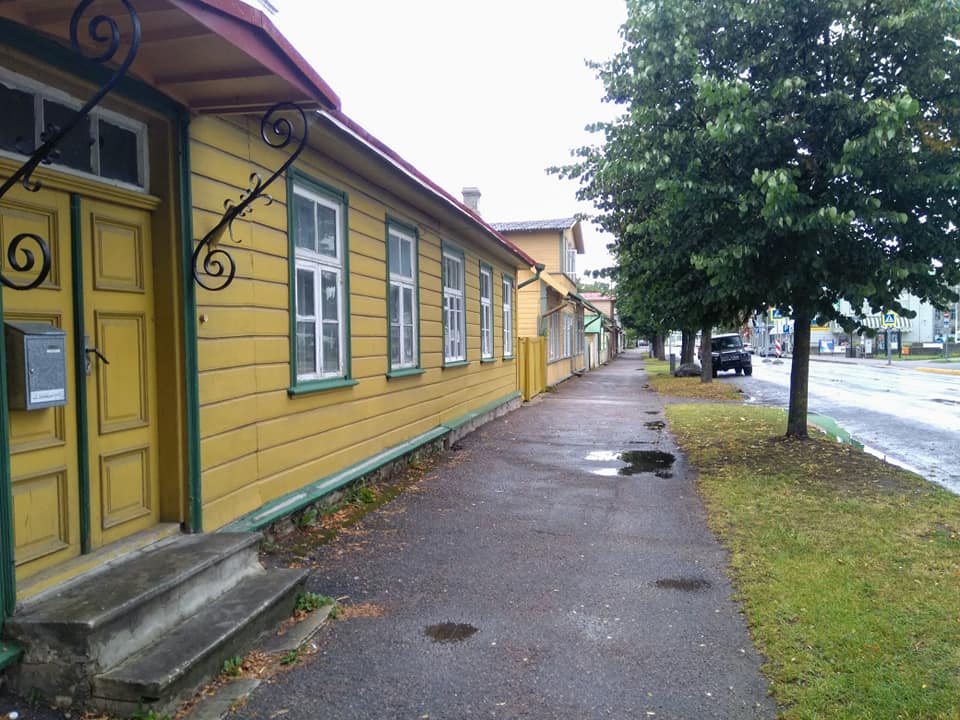 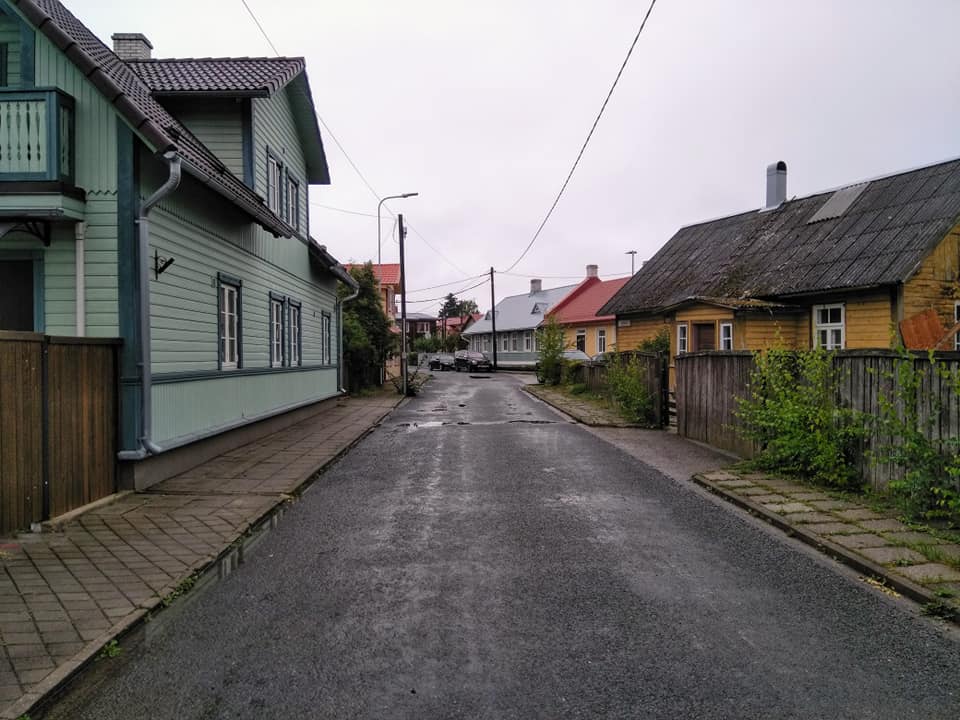 The centrepiece of the Old Town is Haapsalu Castle and Cathedral, a feature of the town dating back to its founding in the thirteenth century. The medieval walls, towers and gates still stand. There’s a small museum inside the castle buildings, but I was happy to just wander around the grounds. 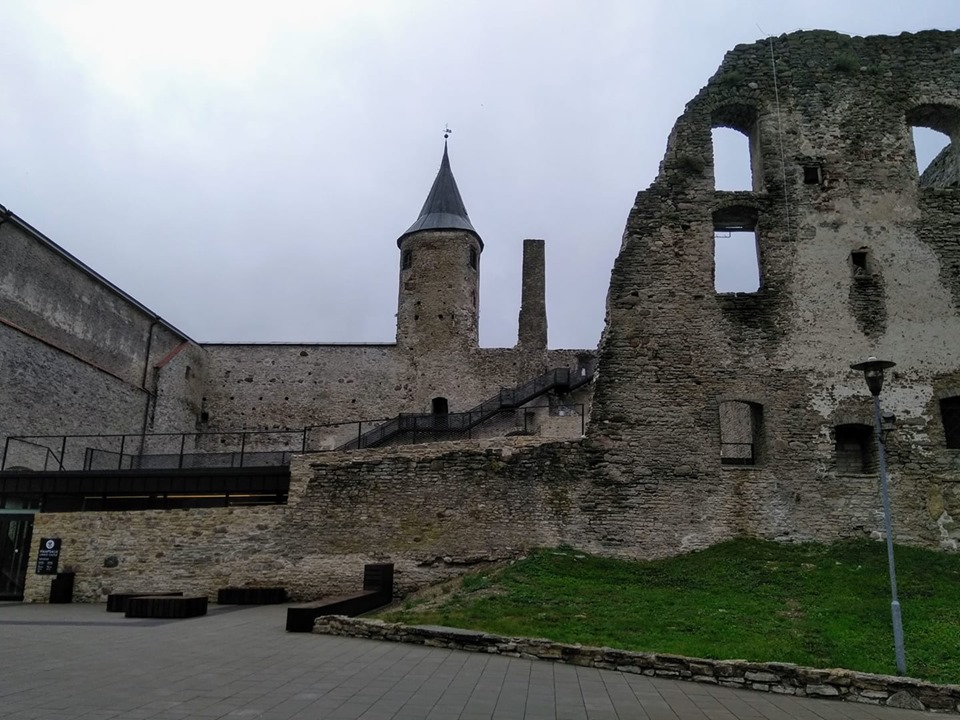 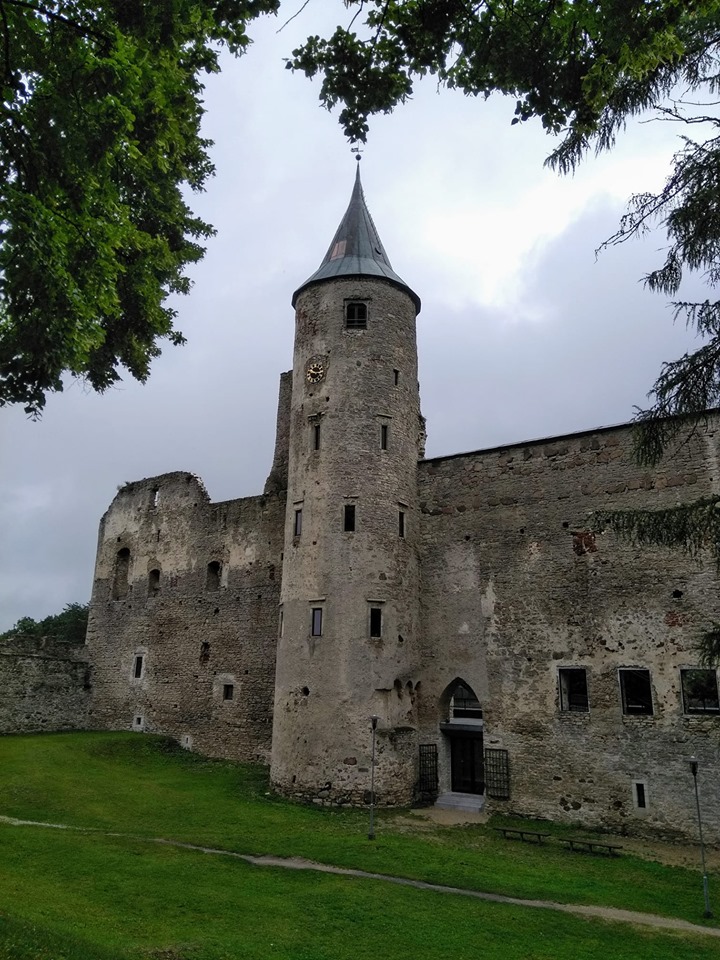 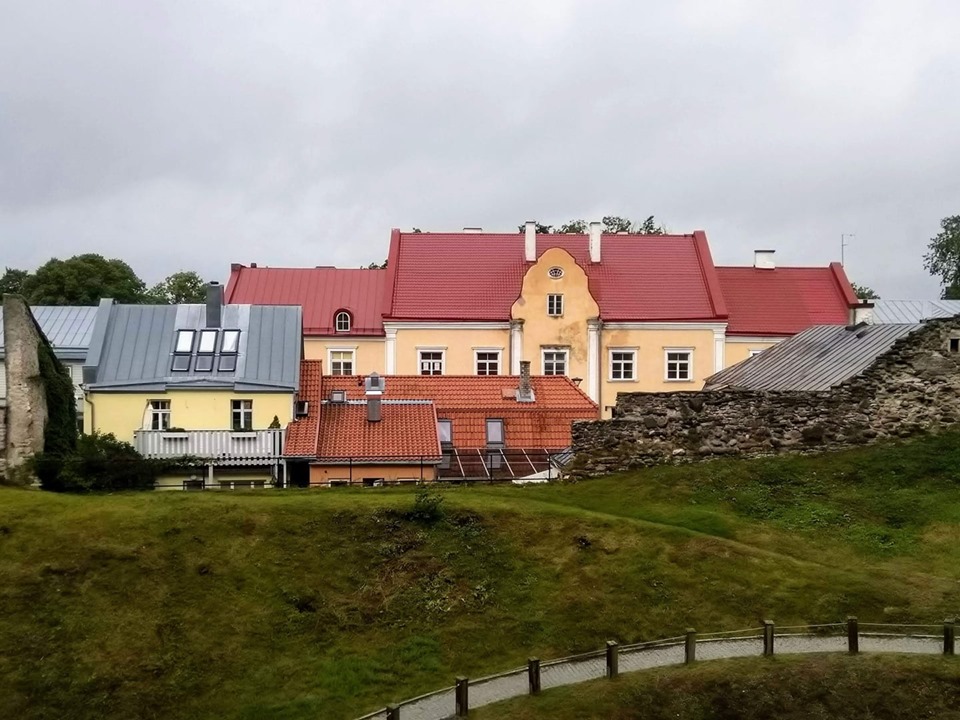 I carried on down to the bay where I turned onto the promenade for a stroll. With the puddles on the ground and a dampness in the air suggesting that it had been raining here too, there were not many other people around apart from a jogger or dog-walker here and there, so it was a peaceful walk. There were more pretty, colourful wooden houses lining the esplanade, and plenty of swans, ducks and other birds around the shore. I soon spotted a statue a little way out in the water, and as I got closer I realised that it was a polar bear; even with my librarian super-searching skills I have yet to discover why it was decided to put a polar bear there, so if anyone knows, please do enlighten me! 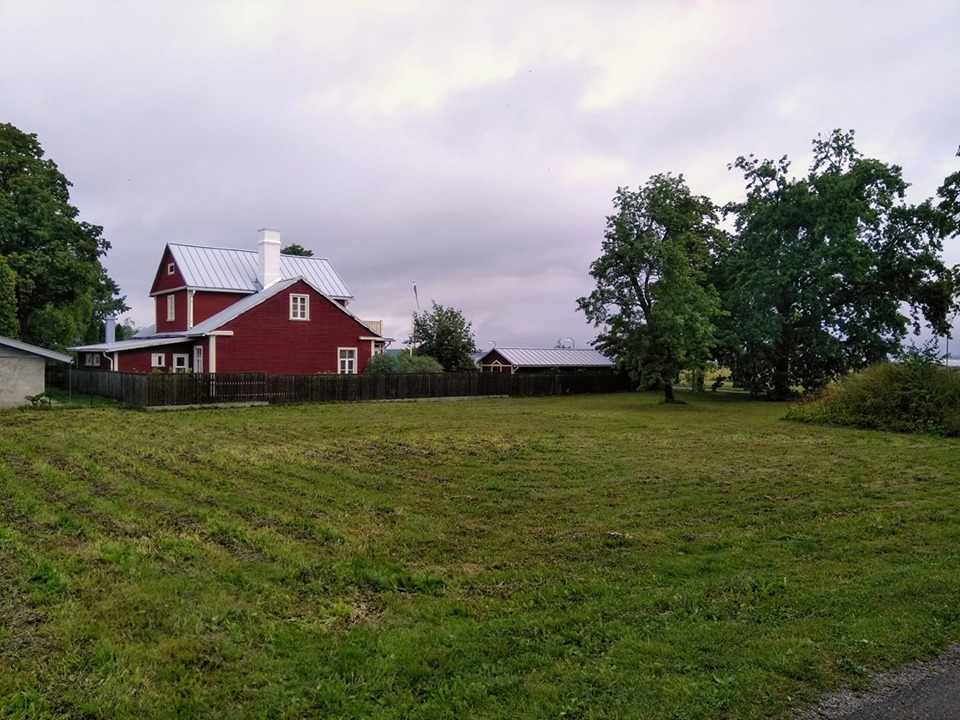 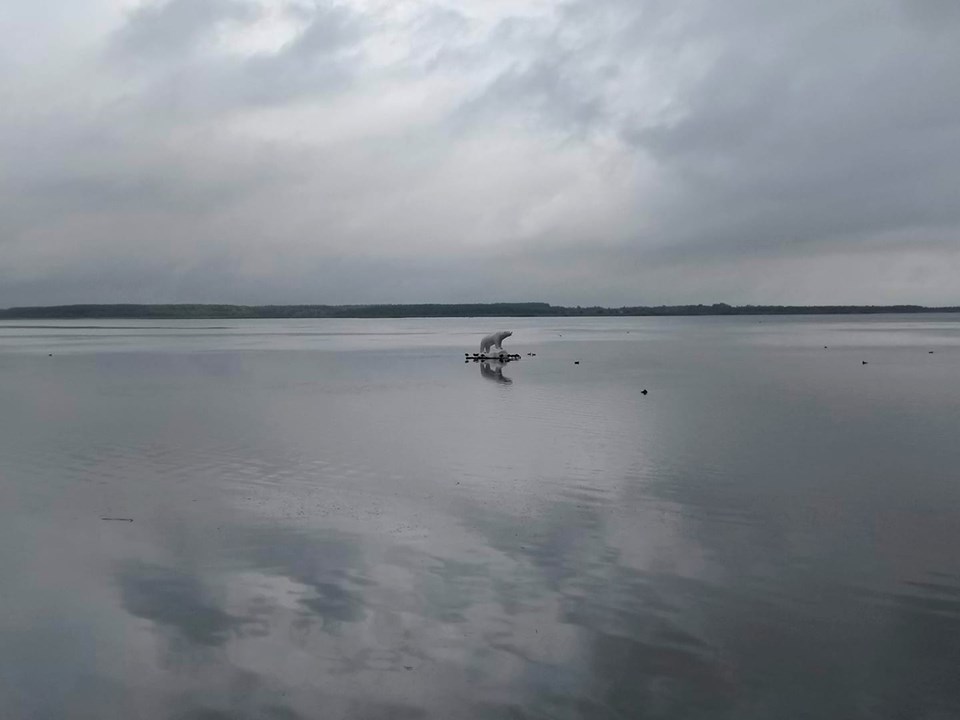 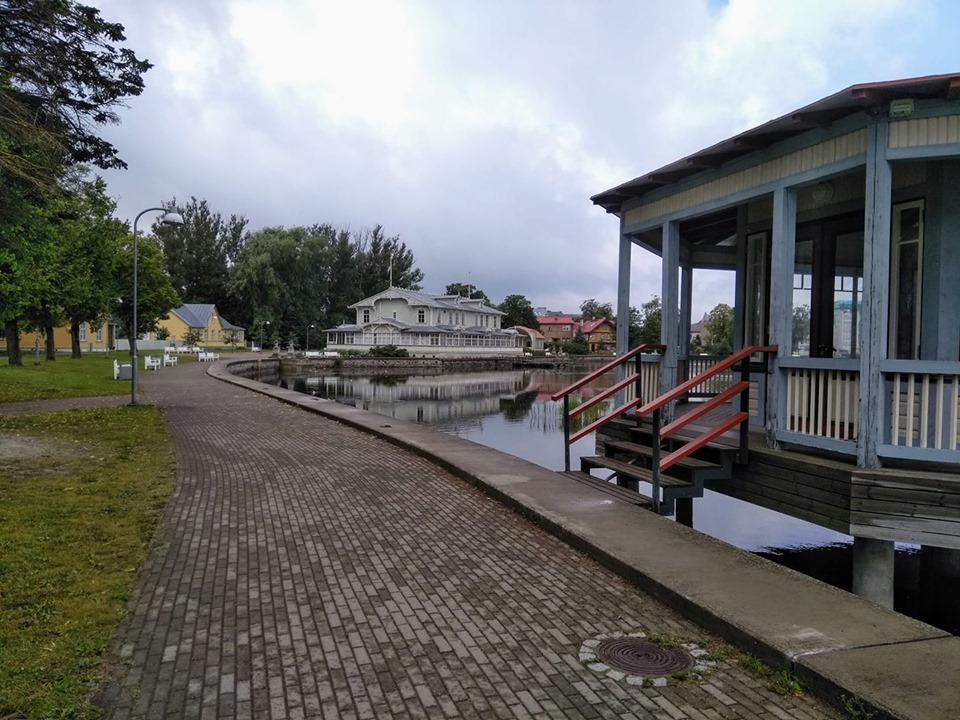 Another famous visitor to Haapsalu in the nineteenth century was the renowned Russian composer Pjotr Tchaikovsky, who enjoyed walking along this very promenade and watching the sunrise over the water; it is claimed that his time here inspired one of his symphonies. Further along I found the Tchaikovsky Bench, a memorial to this particular holidaymaker. Apparently it’s supposed to play a symphony to you when you get close to it, but I couldn’t get it to work – perhaps it had had too much rain! 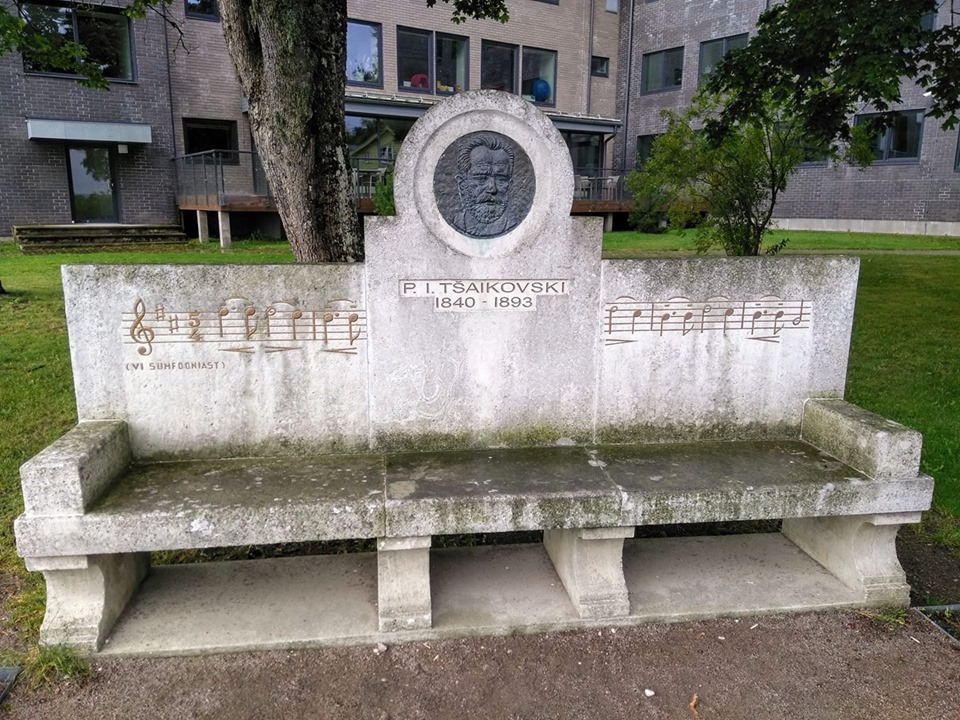 Further along the promenade I came across a couple of the spa resort hotels where visitors still come to Haapsalu to enjoy the healing effects of the sea mud. If I had been staying in the town longer I would definitely have booked in for a treatment to see what it was all about.

As I walked back into the Old Town the sun was coming out, and the colourful houses, buildings and churches were looking particularly pretty. The cafes were all open for business and there were plenty of people out and about. 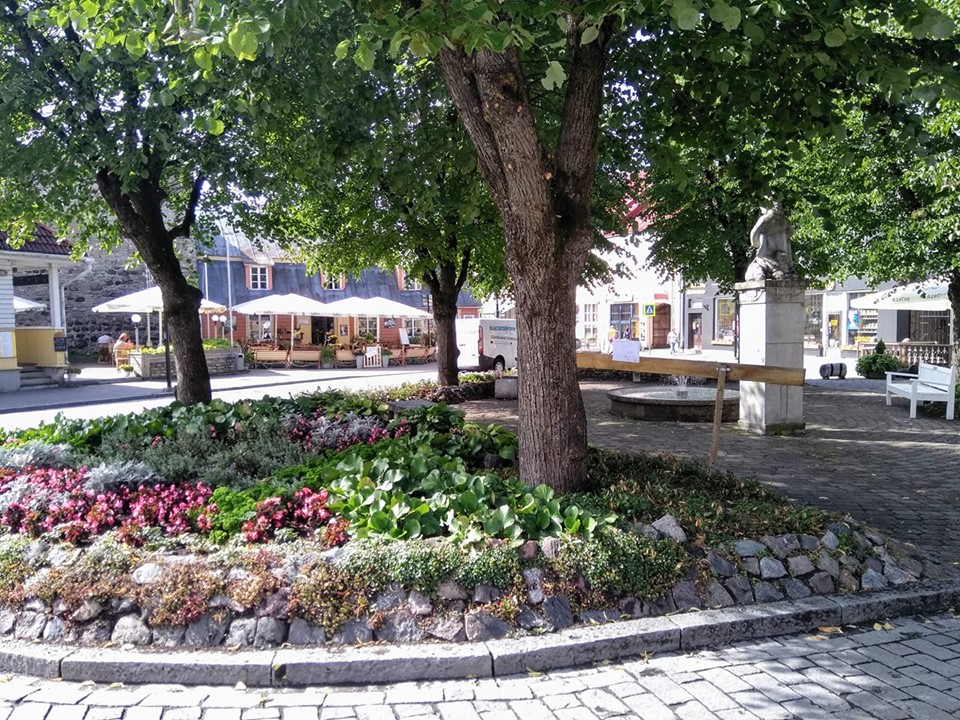 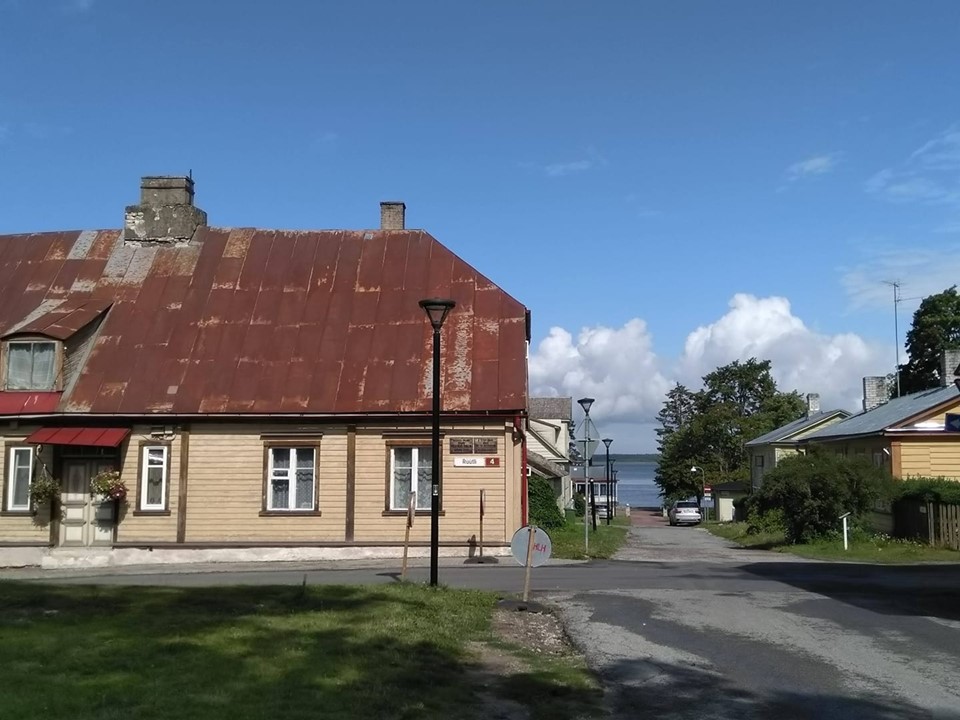 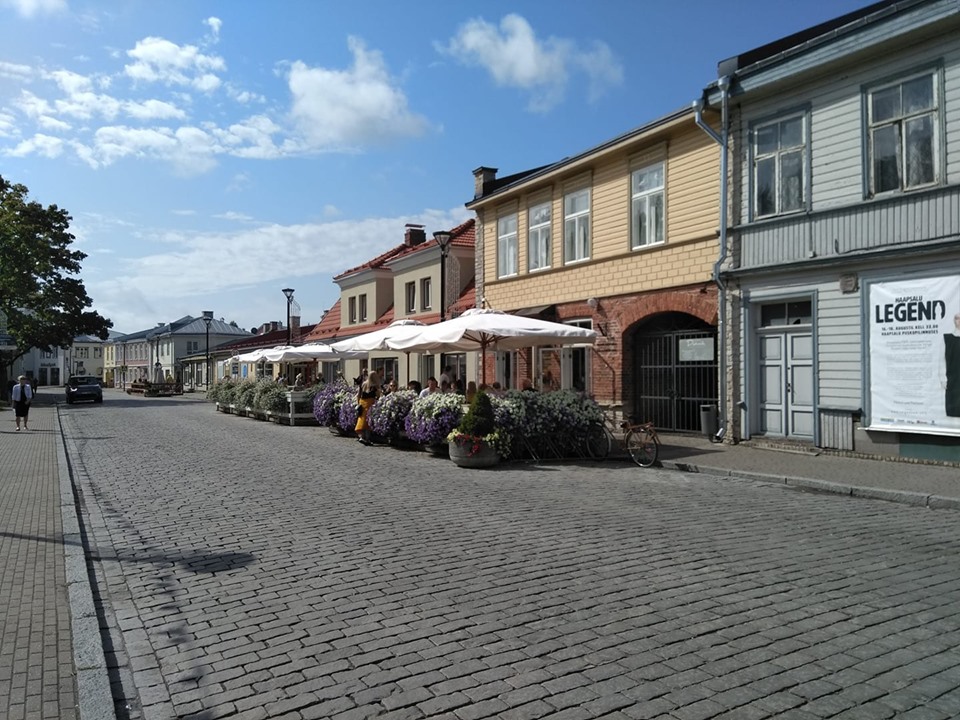 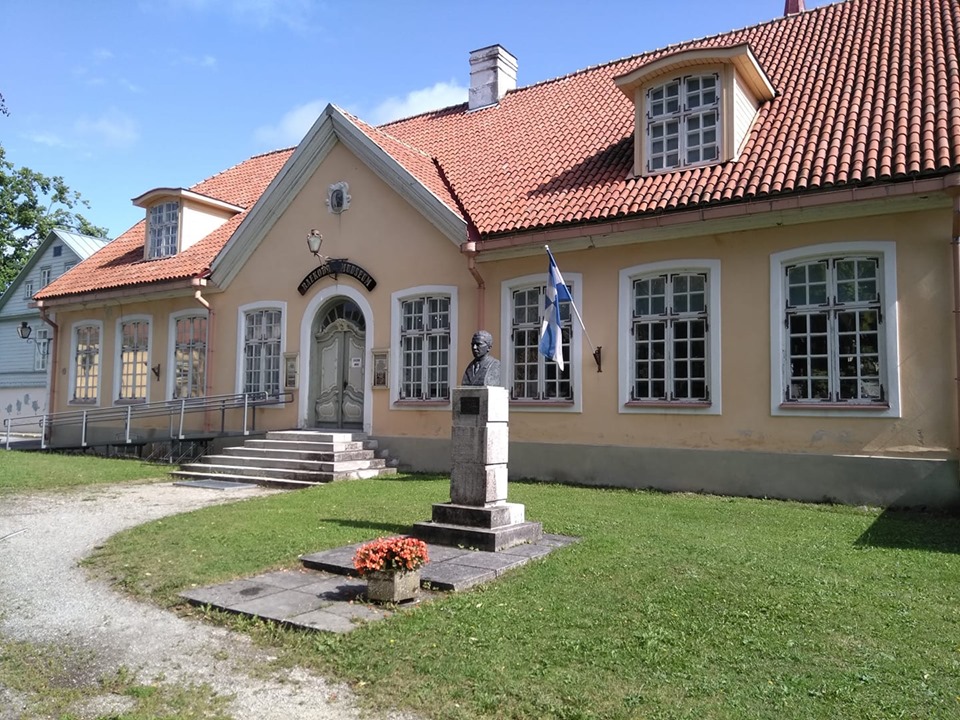 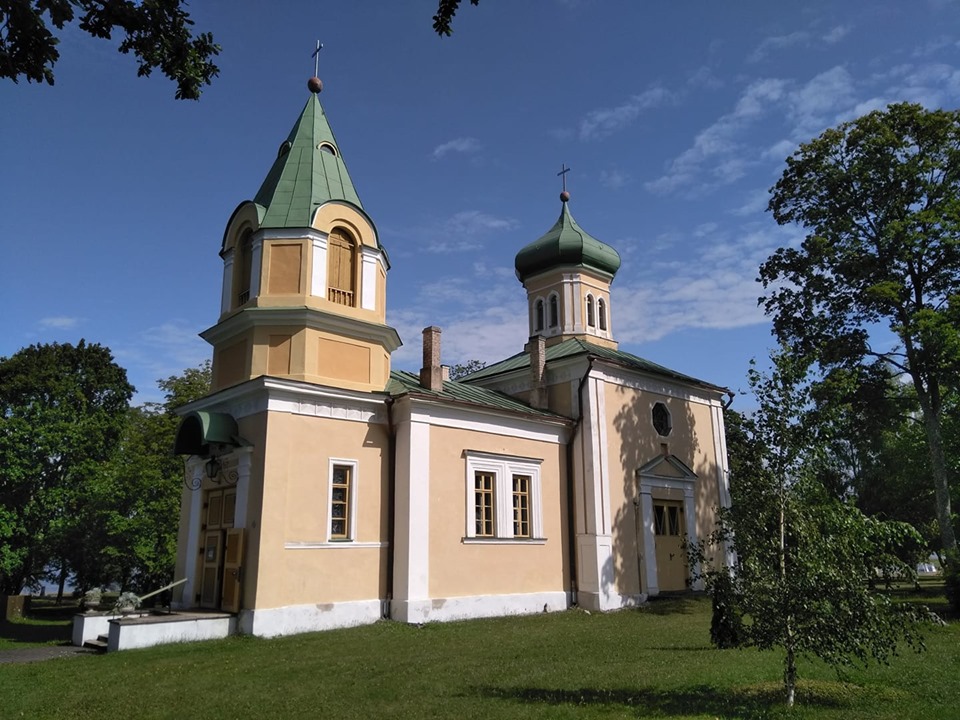 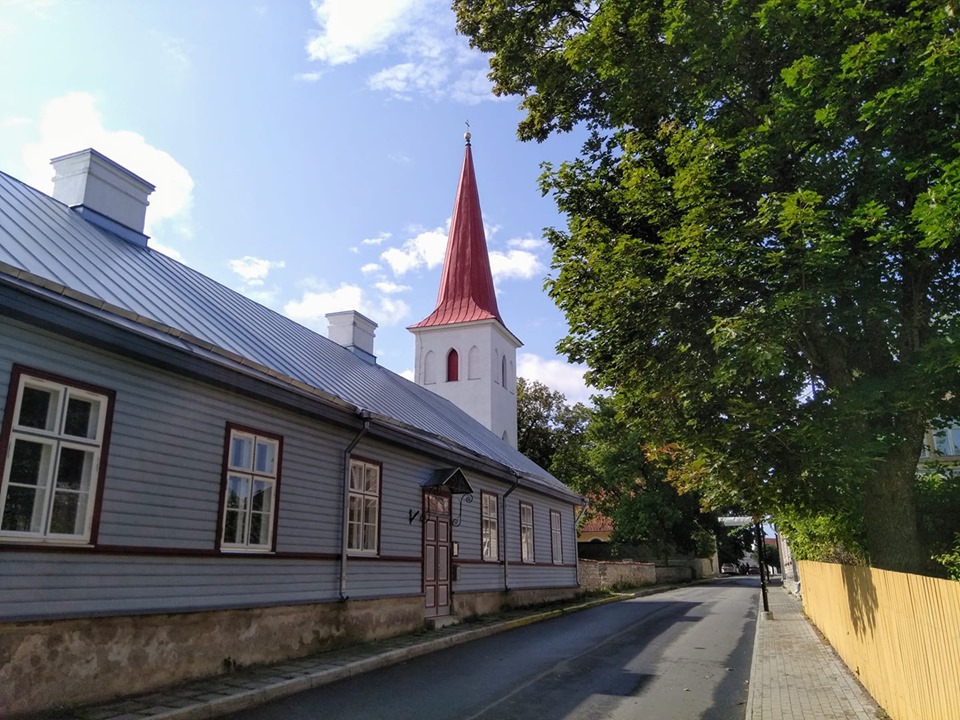 Arriving back at the old railway station to catch the bus back to Tallinn, I finally spotted a train that was in fact in service; the little red sightseeing road train, Peetrike, which operates a brief tour around Haapsalu during the summer months. Judging by the number of families waiting to get on, it seemed to be a popular attraction. 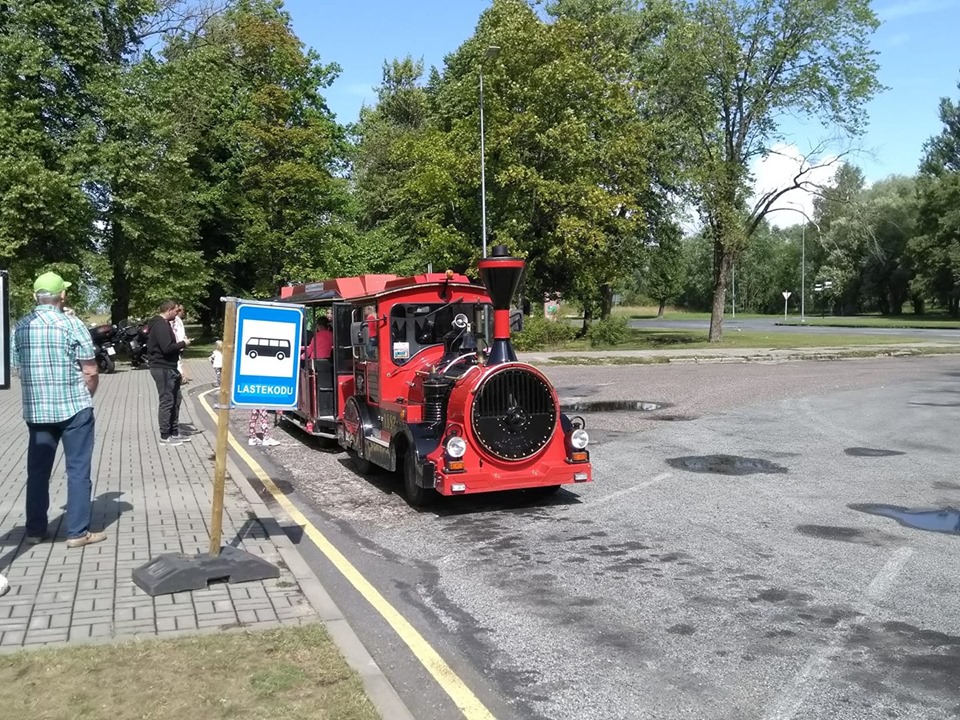 Haapsalu was for me a very worthwhile day trip from Tallinn; not only did I escape the rain, but I enjoyed wandering around a beautiful town with a vibrant history, and it was a fantastic opportunity to get a glimpse of Estonia outside of its famous, well-visited capital, which I suspect many visitors to Tallinn don’t manage to do. 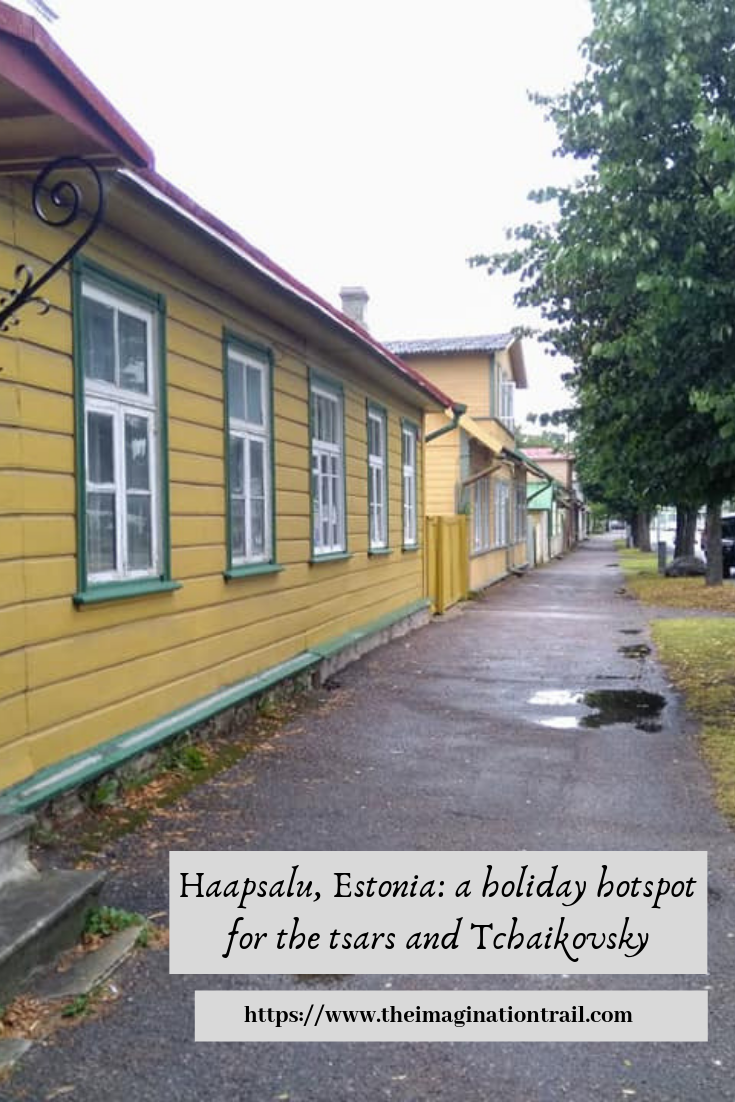 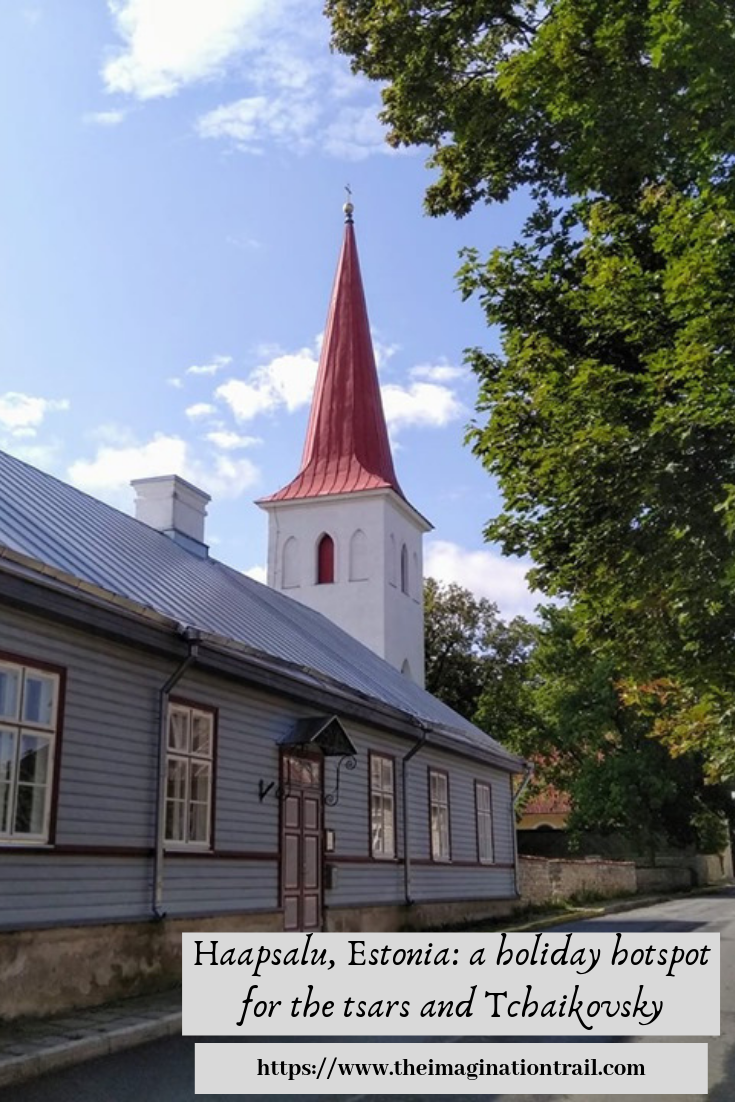