Twenty-four hours in Brussels: an easy weekend trip from London 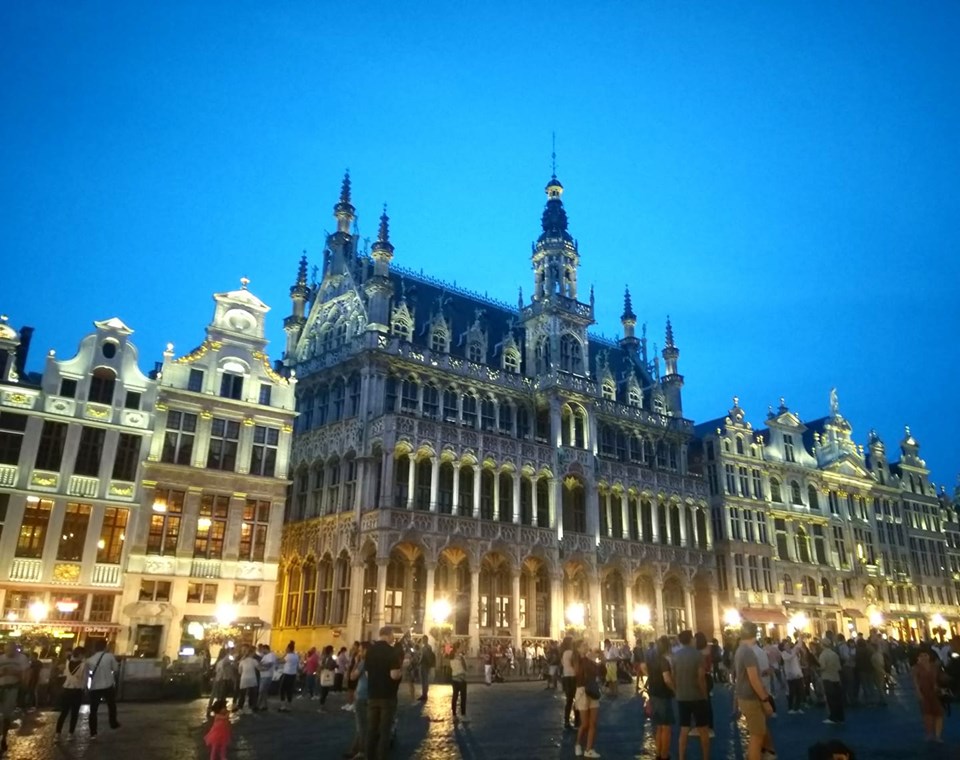 I’ve mentioned several times already how one of the things I’m enjoying about living in London is the wealth of access points to Europe and beyond that this city offers. Probably the easiest is the Eurostar; the train which departs from St Pancras International Station and zooms through the tunnel underneath the English Channel onto the continent. So when I recently saw an alert for a Eurostar sale, I took a peek, and decided to grab myself some cheap seats for a weekend trip to Brussels, Belgium’s capital – a new city and a new country for me.

I took the first train out on a Saturday morning so it was a very early start, but the check-in procedures in London are quick and simple; luggage through the scanner, UK passport check and then French Border Control directly afterwards, all done in the space of 10 minutes (unfortunately with Brexit looming, I will probably never have this easy experience again). After just over two hours on a fast and comfortable train, I was able to disembark, and walk straight out of Brussels/Bruxelles Midi/Zuid Station and into the city.

I’d booked a night in a hostel in the northern part of the city centre, so it was just a half-hour walk up from the station to go and drop my bag before heading out to explore. The central part of Brussels is quite compact and easily walkable. I’d looked up the main points of attraction already, and decided that with everything quite close, the easiest way to see things was to pretty much just wander.

It was a warm, sunny morning towards the end of summer, and there were plenty of other tourists out and about too. My first stop was Brussels Cathedral, a stunning Gothic church where a wedding was in full swing – the happy couple were having photographs taken on the steps, and will have appeared in a lot of holiday snaps too! 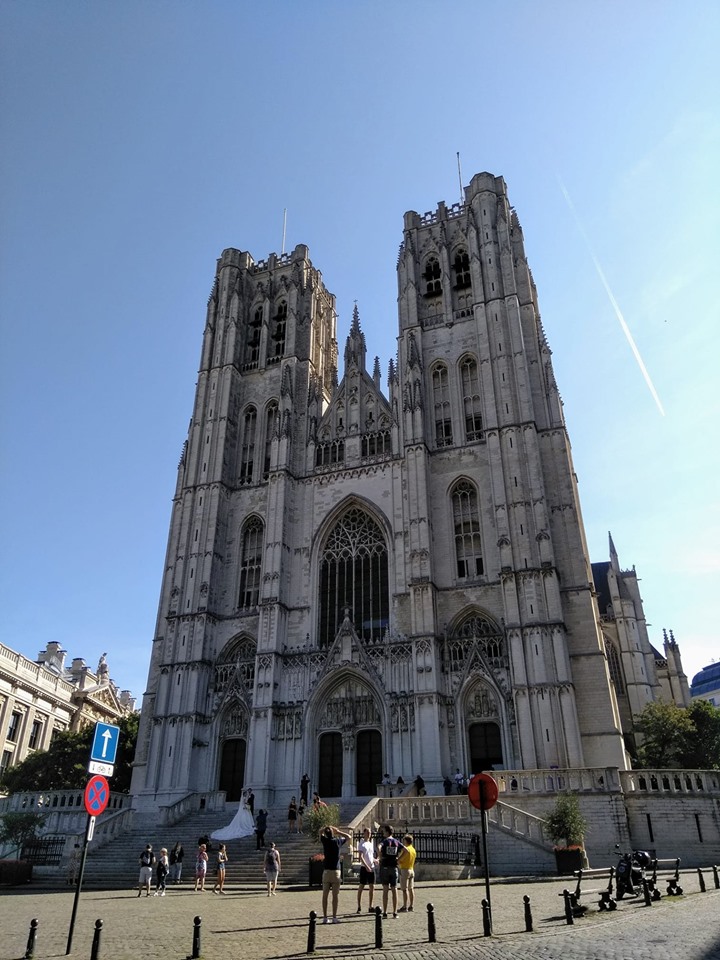 From there I walked down to the Grand Place, or the Grote Markt (in the Brussels region, the two official languages spoken are French and Dutch, so most locations and buildings are known by at least two names). This is a very large square which is the focal point of the city centre for visitors (if you take any walking tours whilst you’re here, somewhere within this area will probably be your meeting point). The City Hall and various other fancy buildings which line the square gave it a very “grand” feeling in the English sense of the word too. Everywhere I looked there were tourists taking photos, and the outdoor terraces of the cafes, bars and restaurants around the edge were already busy. 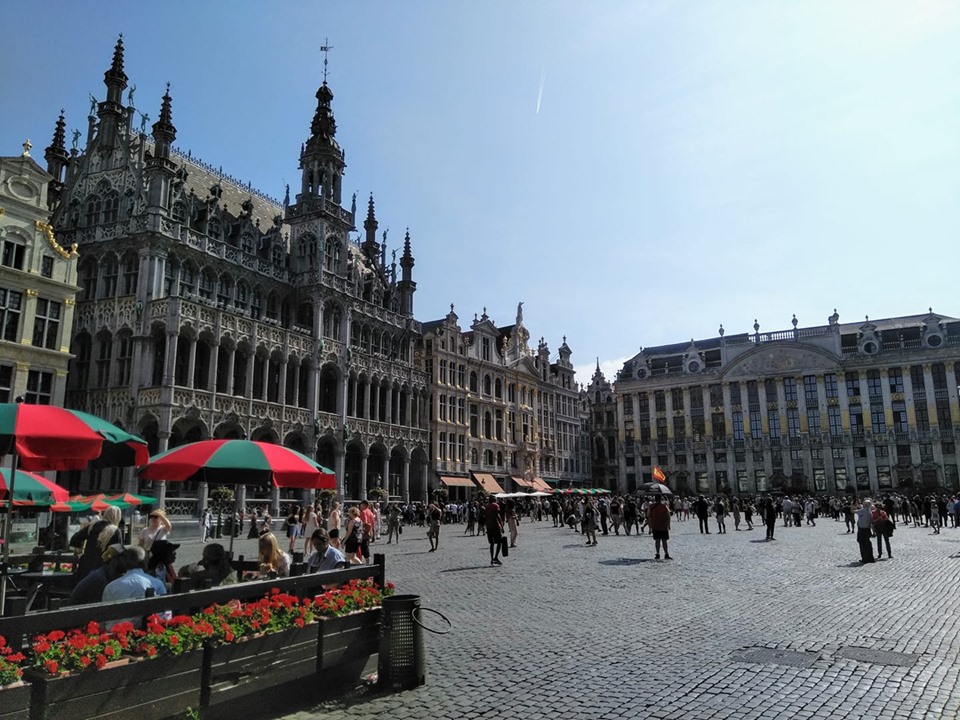 After taking in the stunning architecture, I went on a short walk in search of what seemed to be the most well-loved monument in Brussels; the Manneken Pis. As the name suggests, this is a small statue of a boy appearing to pee into a fountain. He gets dressed up in various costumes throughout the year, and the souvenir shops are full of miniature versions and other related trinkets; there was even a replica in the foyer of my hostel! I knew I’d arrived at the right spot when I spotted a massive throng of tourists crowded around something with their cameras, and, when I got to the front to take a look myself, I have to admit I was quite underwhelmed – it really is just a little statue of a urinating boy! I was more impressed by the Manneken Pis street art piece which I found a little way up the road as I walked away, utterly bemused by the whole thing. 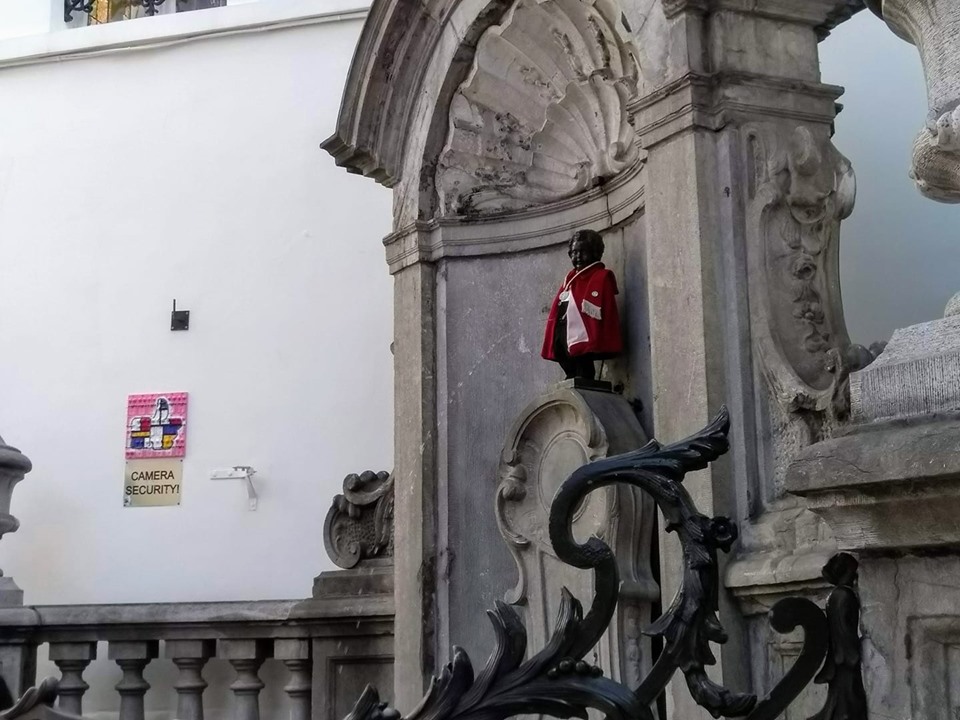 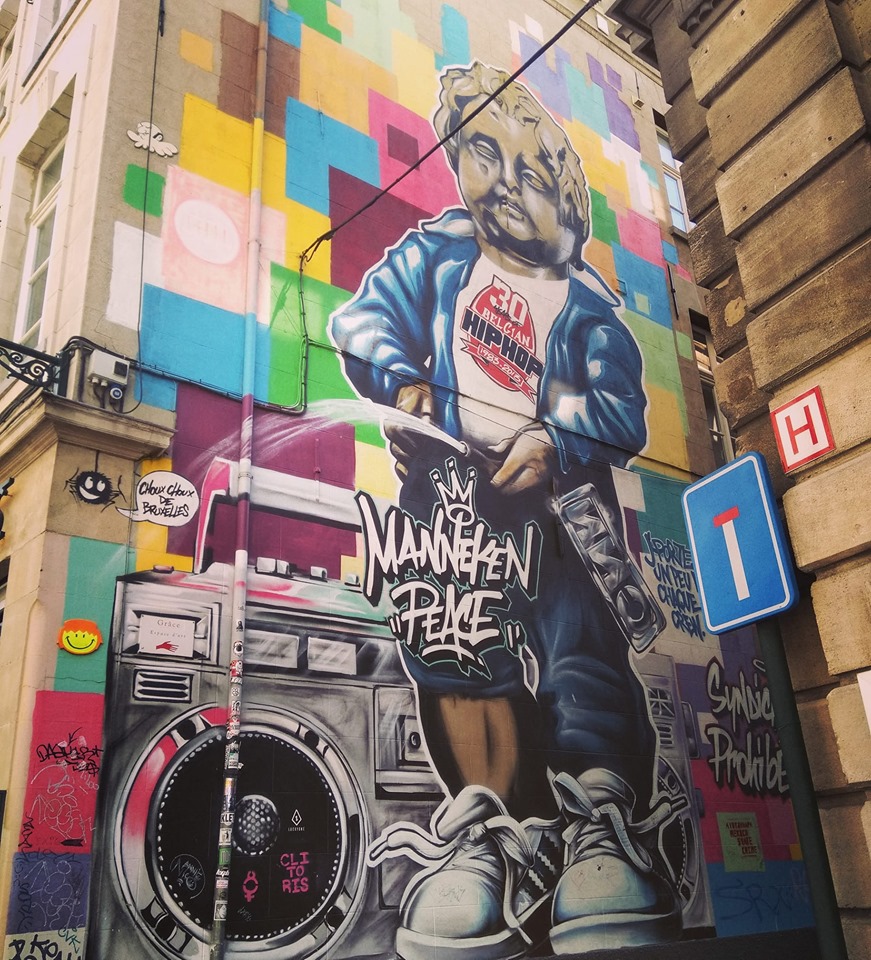 It was about time for some lunch, so I headed in the direction of a vegan waffle shop, Veganwaf’, which had been recommended to me by a friend. I found it quite easily inside the Galerie Agora, and I certainly wasn’t disappointed; all of the options that you’d expect from a Belgian waffle vendor were there, all in cruelty-free form, and not only did I enjoy a delicious waffle with heaps of chocolate sauce, but the guy behind the counter even gave me some recommendations for vegan restaurant options for dinner that evening. 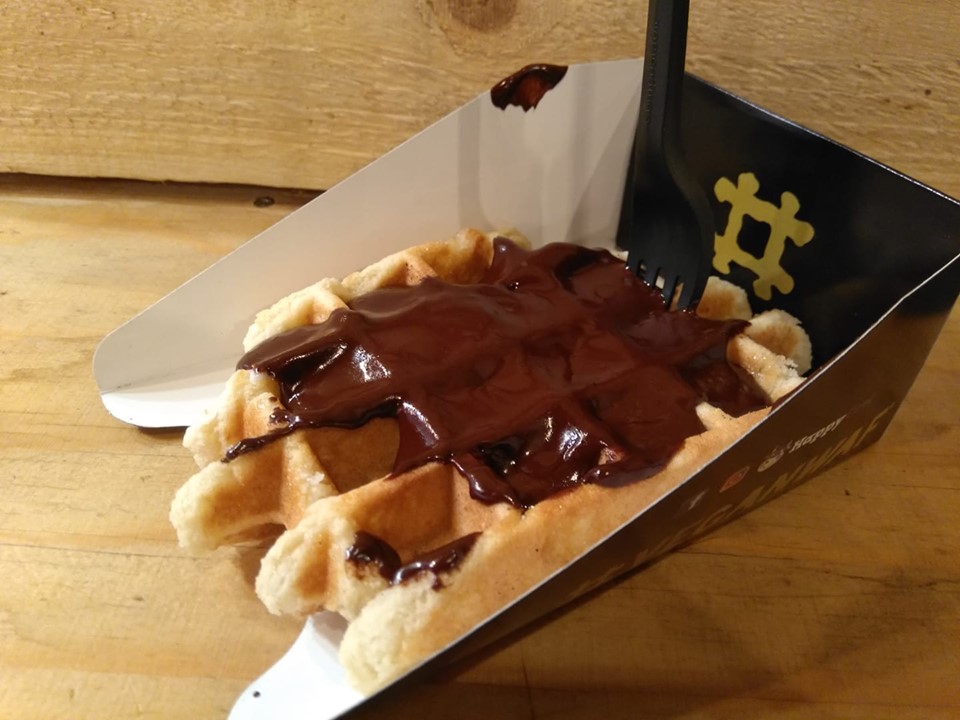 Full of waffle, my next stop was the Mont des Arts, or the Kunstberg area of the city centre. This is the site of several museums and galleries, and, sitting atop a hill, provides a brilliant view out over central Brussels. 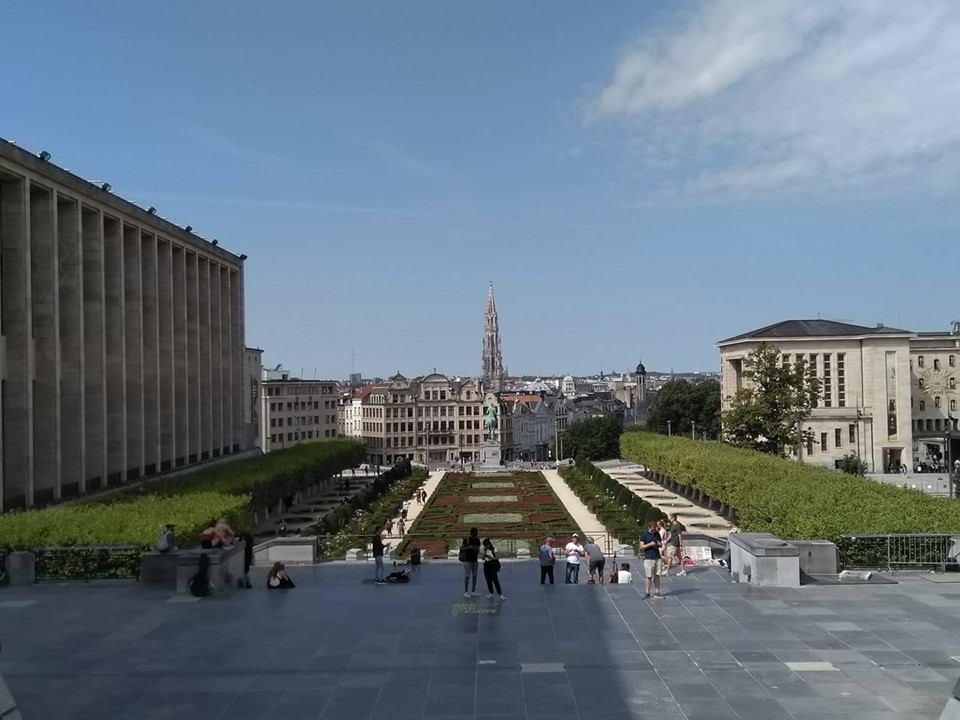 From here it was a 20 minute walk to one of the things I absolutely had to see whilst I was in Brussels; the European Parliament. As someone who has always had an interest in politics, not to mention a British person with very strong views on Brexit (it’s a fucking stupid idea, if anyone was in any doubt as to where my feelings lie), I was keen to see the buildings myself, having never visited before. There is a museum where visitors can learn more about the history and the workings of Parliament, but I was content to wander around the exterior of the complex (and to get a #fuckbrexit selfie of course). 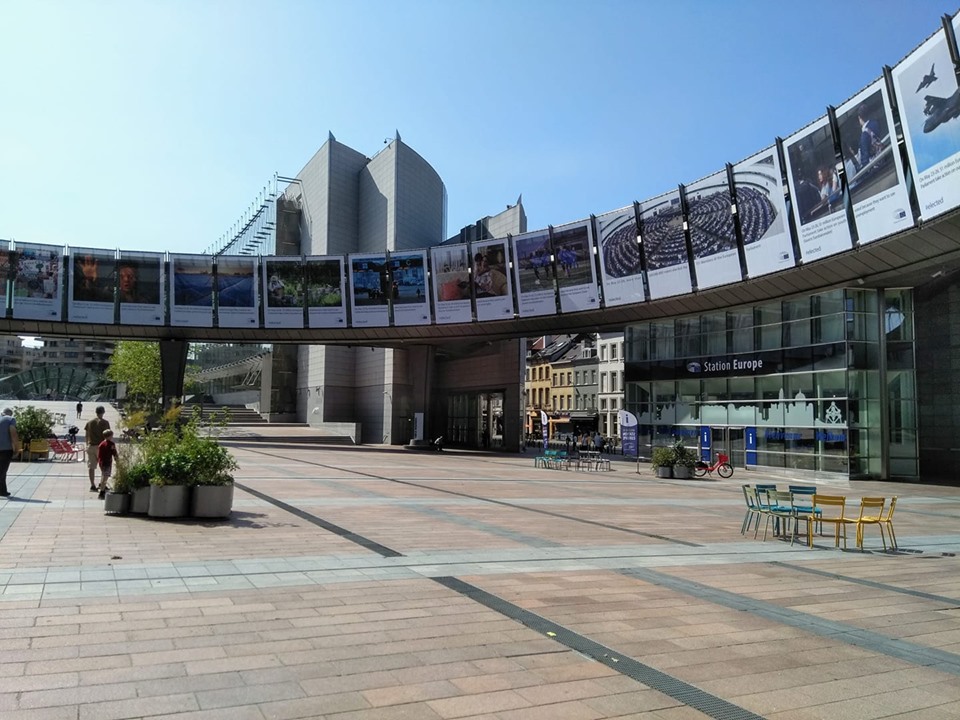 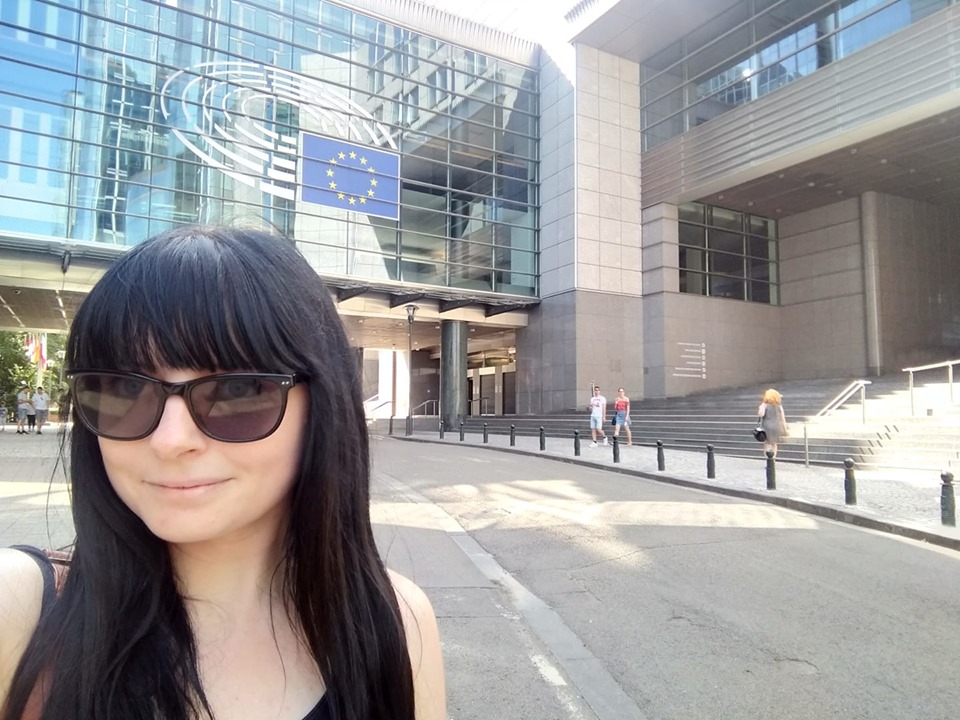 I headed back to the Mont des Arts, via the Parc de Bruxelles and Palais de Bruxelles. There were buskers playing music in the gardens below, and at the top of the steps a little bar stall had been set up, with yellow deckchairs set out for punters to sit and enjoy the view. With the temperature now hitting 30 degrees and not a cloud in the sky, this seemed like the ideal spot to stop for a rest and a Belgian beer high above the city. 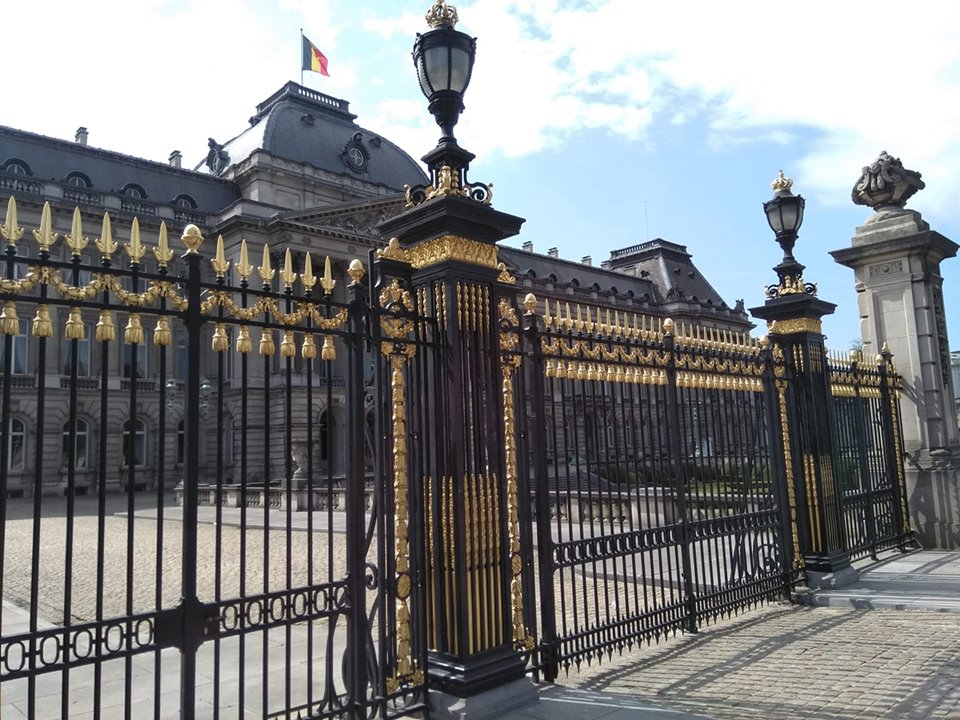 I had time for one museum that afternoon, and I decided to continue the beer theme and visit the Museum of the Belgian Brewers, back down on the Grande Place. In hindsight, this probably wasn’t the best choice; it was a lot smaller than I had anticipated and the 5 euro entry fee, which included a free beer, was essentially just paying for the beer, an information video and a few information boards. It was a nice beer and a lovely old-fashioned little bar, but if I were doing this trip again I would definitely have picked one of the many other museums in the city centre.

A little more wandering – there is plenty of street art and lots of interesting architecture to see in the various streets within Brussels – and then it was time for dinner. I picked the first of the recommendations that I’d been given, Liu Lin, a vegan Taiwanese restaurant where I enjoyed a delicious bowl of rice noodles and various vegetables. 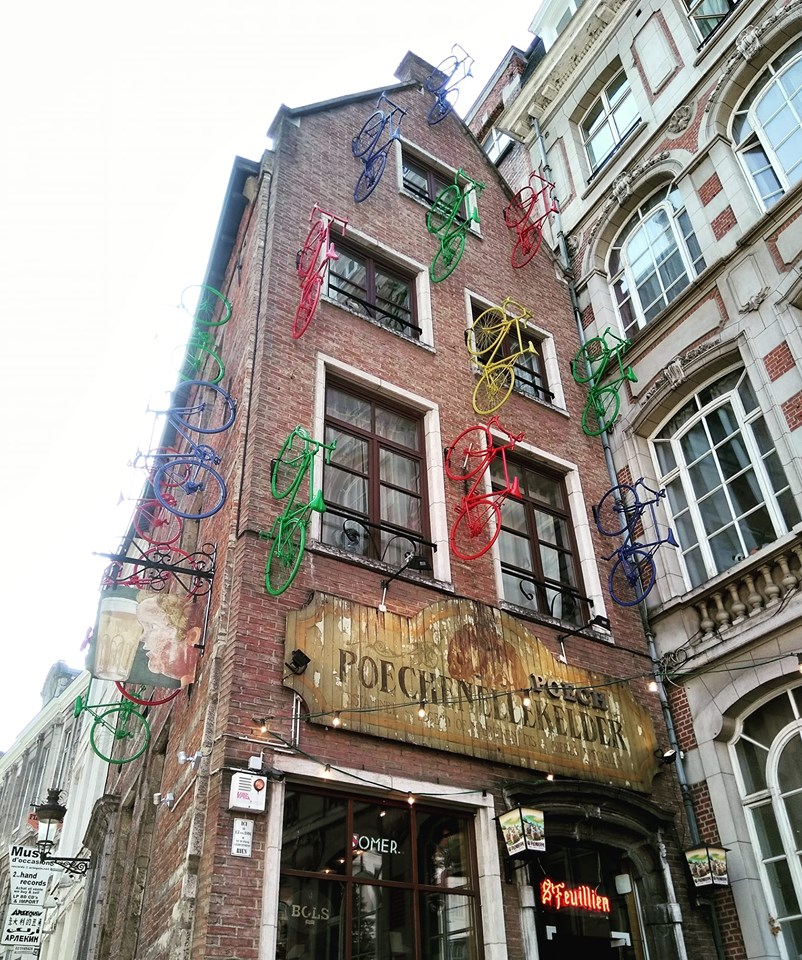 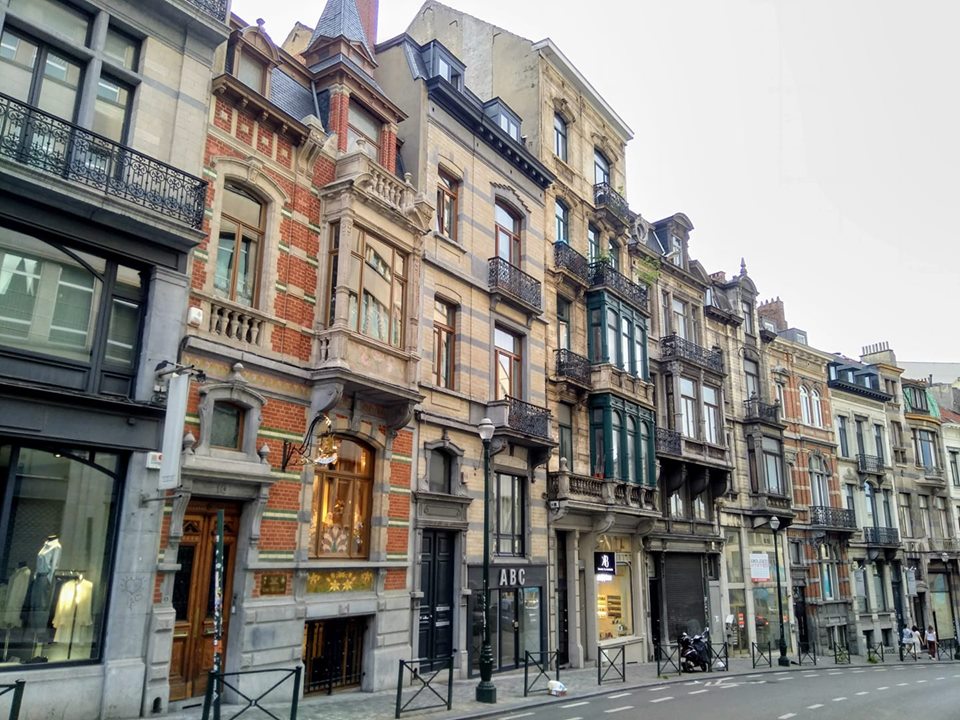 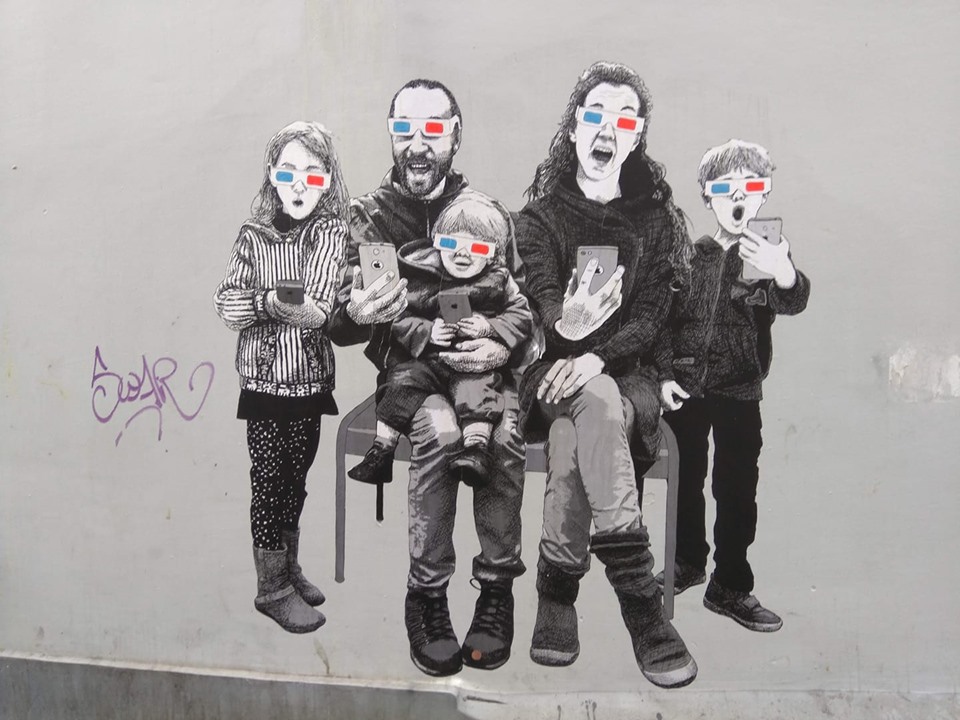 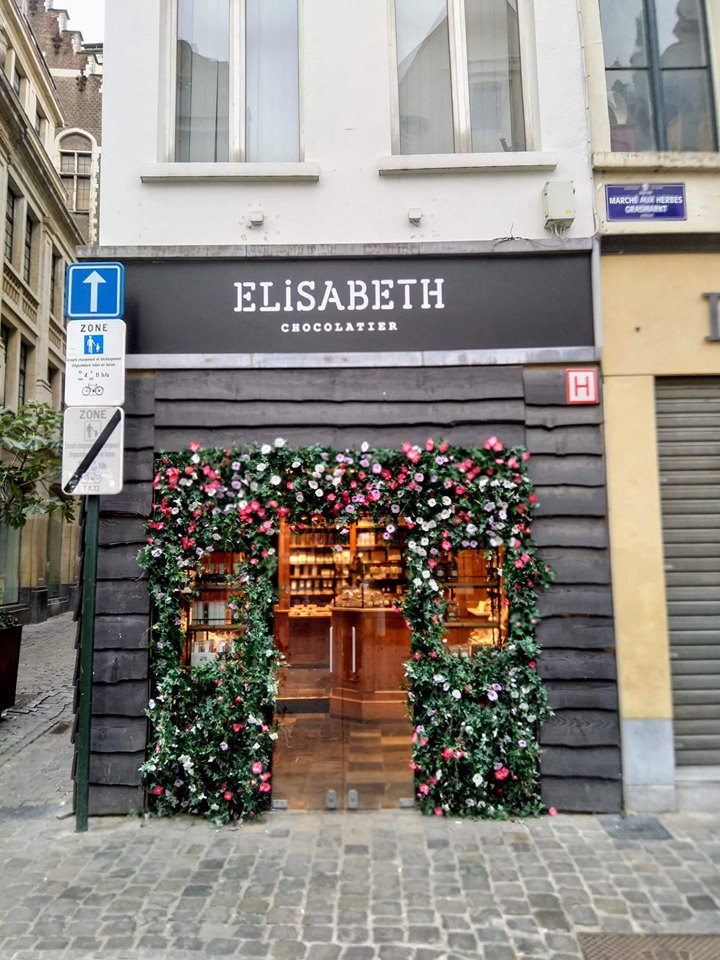 After an evening walk, with the air still warm and dusk approaching, I decided to return to the little bar with the deckchairs on the Mont des Arts for another beer while I watched the sun set over the city. 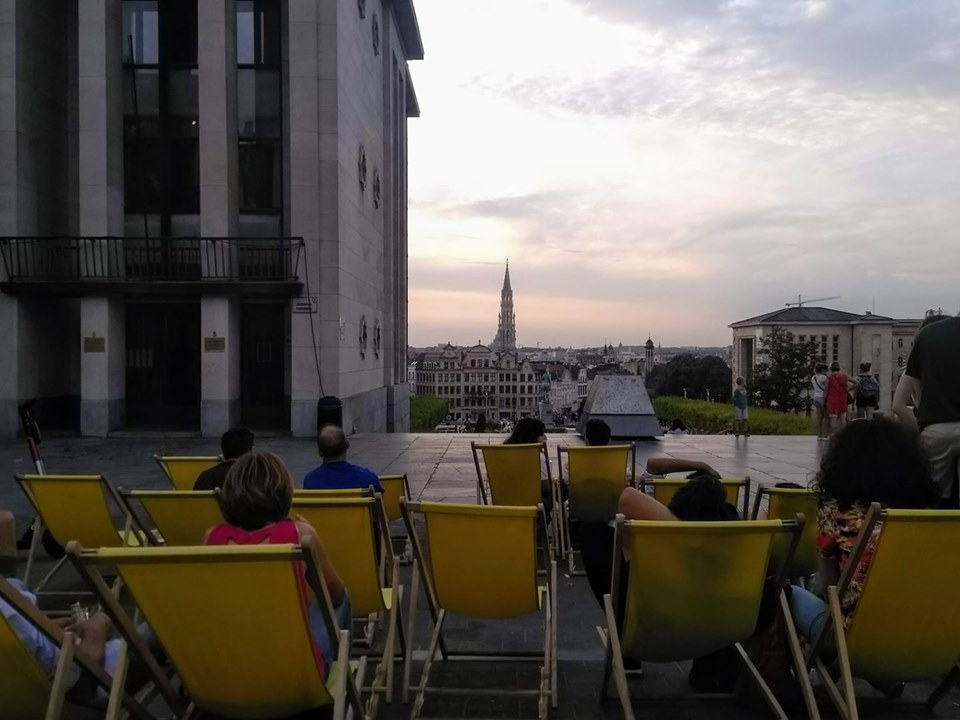 It was Saturday night and Brussels was buzzing, with groups of visitors starting to hit the bars, and lots of tourists trying to get photographs of the stunning buildings of the Grande Place all lit up after dark.

It definitely seemed to be a party city, but after a long day of exploring, I was ready to return to my hostel to have a beer in the quiet bar there, before heading to bed. The next morning my train was leaving just before lunchtime, so being an early riser, I had time for a Sunday morning walk through the quiet streets, meeting only a handful of other tourists, and the street sweepers clearing the debris of the previous night; a total contrast to the busy city of the day before.

It was another quick and easy train journey back to London, and I was home by early afternoon, ready to prepare for the working week ahead. For me, Brussels was an ideal weekend trip; it was a lovely city, but there wasn’t that much to do there, so it was perfect for one day and one night of exploring. Had I been staying longer, I could have visited some of the other museums, and checked out the Atomium, a strange scientific-shaped building, now a museum, which is another popular attraction. However, I think that I was able to get a sense of Brussels and see the highlights of the city during my 24 hours there. 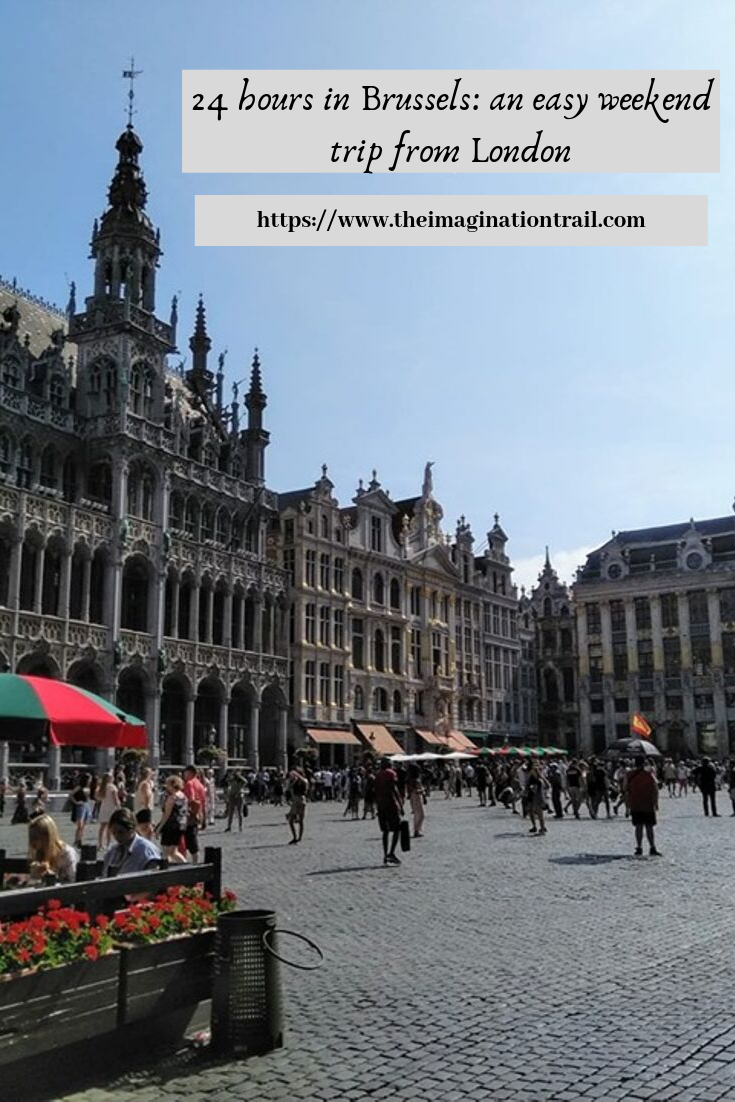