London to Barcelona by train 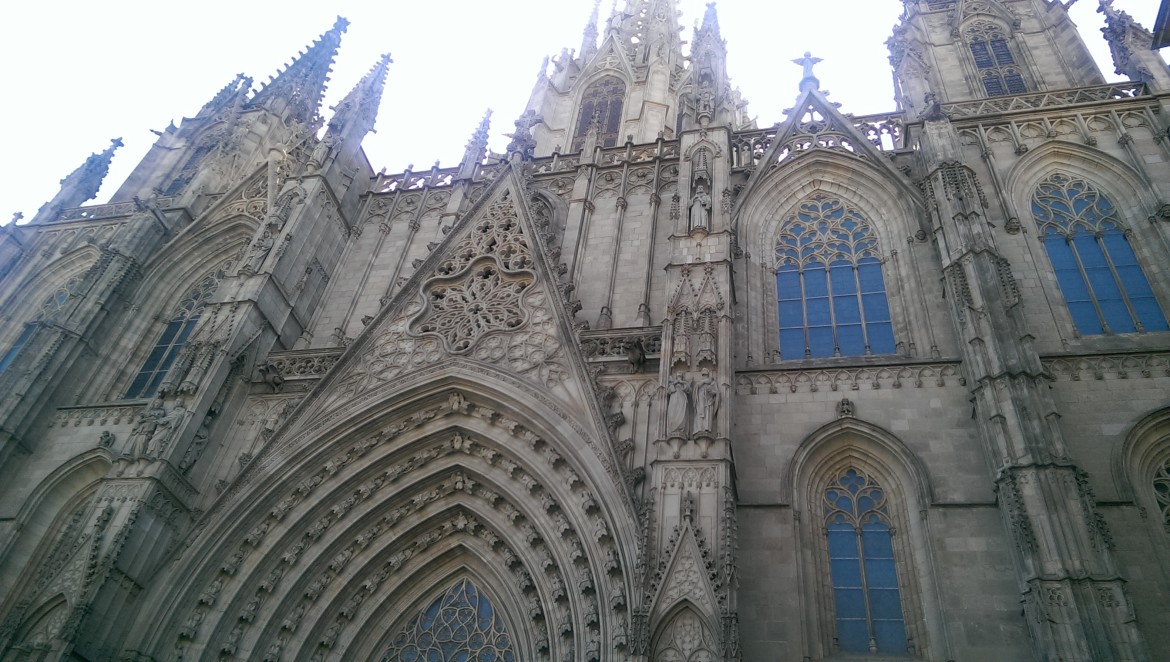 Tell someone that you’re taking a train trip to another country, and the reaction is pretty much always the same; that it sounds wonderful! There’s something romantic and intrepid about long train journeys, and in the UK we only have to take the Eurostar over to Paris for a whole continent of destinations by train to open up. For years I’ve been taken by the idea of travelling all the way to Barcelona by train, but I didn’t want to do it on the overnight sleeper – I wanted to watch the landscape change. So when the fast TGV line between Paris and Barcelona opened at the end of 2013, connecting the two cities with a six and a half hour daytime journey, I was able to make my trip, which I finally did this summer. Starting at London
My first step was to head to St Pancras International Station in central London, from where the Eurostar trains depart. You do need to “check in” at least 45 minutes before the train leaves, and go through airport style security, but its quick and efficient (no baggage drops to slow things down – you carry your own case onto the train) and you’re soon through to the departure lounge, where you can relax with a coffee until your train is announced.

Top tip – if you get there early and have time for breakfast before you check in, follow the signs for the short walk over to King’s Cross Station and grab something from Leon, which is open from 6am and serves yummy gluten free options too (poached egg, saucy beans and chorizo anyone?).

London to Paris
This is a two and a half hour journey on comfortable trains with regular departures. It’s not the most exciting journey scenery-wise (even though the fact that it goes through a TUNNEL UNDER THE SEA wows me every time, its actually not that interesting!) so take a good book or flick through your guidebook or plans for your destination. There’s a buffet car selling hot and cold drinks, food and alcohol, or you can bring your own with you (including booze).

Changing trains in Paris
Eurostar trains come into Paris Gare du Nord, but the trains to Barcelona depart from Gare de Lyon, so I then had a fairly short Metro ride (two stops on the RER line D, direction Melun or Malesherbes) to make.

Top tip: the Paris Metro is a simple system, with one ticket equalling one journey underground. You can buy multiple tickets and use them later, so if you’re coming back, buy two tickets and save yourself time on the return journey. Paris to Barcelona
These are quite simply the best trains I’ve ever been on. To start with, they’re double-decker! I booked my ticket through Rail Europe who do not offer the option to choose seats, but I got lucky on the way out and was given a window seat on the upper deck, so I had a great view the whole way. The train are clean and spacious, with plenty of legroom and luggage storage, and again, there’s a buffet car, or you can bring your own food and drink on with you. Electronic displays in each carriage show you the arrival times for each stop, as well as the speed at which the train is travelling – up to 300 km/h, which was hard to believe as it didn’t feel like we were travelling that fast! I loved watching the landscape change as we progressed through France – from the green fields and hills outside Paris, to the brown mountains, lakes and sea as we hit the south of the country, passing villages, churches, towns, rivers, ports and cities on the way. Even though I wasn’t getting off the train, I felt like I had actually seen some more of France from travelling this way; for example, I have wanted to visit Montpellier for a while, and as the train pulled out of the station I caught sight of one of the famous brightly-coloured trams heading over a bridge – it was like getting a glimpse of the city which I will hopefully see properly one day. View from the train

The scenery began to look more and more like the mountains and roads I have seen in Spain before, and then we went through a tunnel, and at the other end something told me we had reached Spain; I was correct, as we hit our first Spanish stop soon after.

Six and a half hours after leaving Paris, we sailed into Barcelona Sants station, from where it was a short and easy local train ride to my accommodation.

There are downsides to travelling this way of course – it takes a long time (just over 12 hours door-to-door), it’s more expensive than flying, and you have to lug your own suitcase up and down escalators and stairs and onto trains (with legs covered in bruises, I am now completely converted to the idea of a backpack, and will be purchasing one for my future travels soon!). However, it was good to not have to worry about restrictive hand luggage rules or long check-in times, and I felt like I was really going on a journey, and I enjoyed being able to see the country I was passing through. I would definitely take a cross-country train journey in Europe again.