Cooling off in Malaysia’s Cameron Highlands 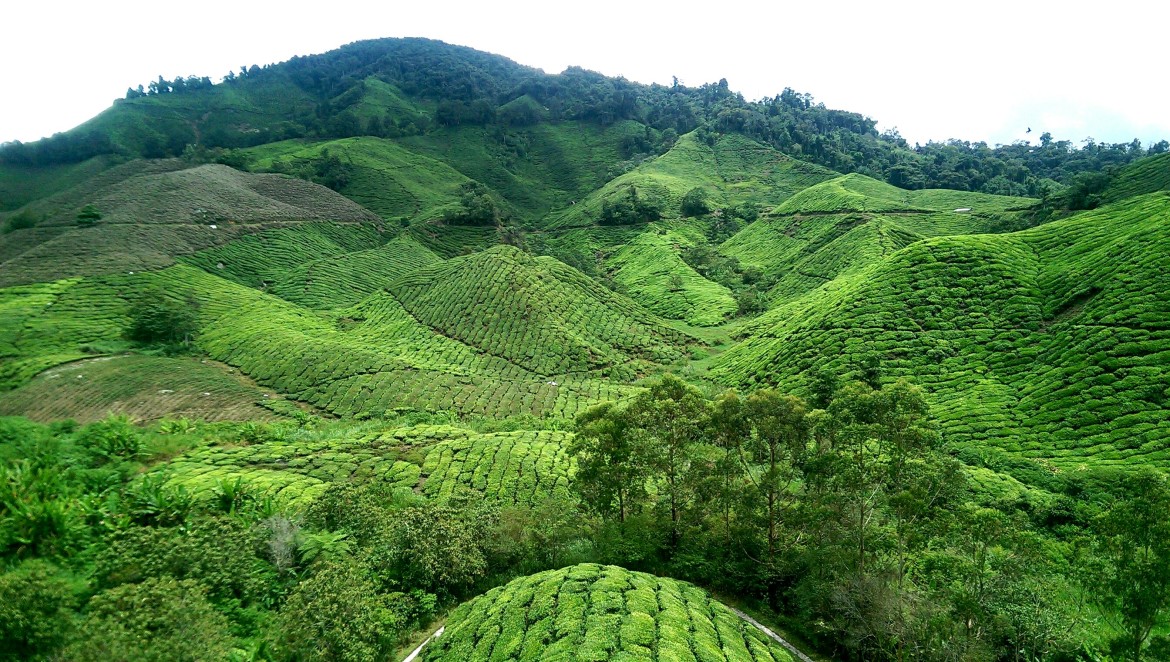 The temperature in Kuala Lumpur was rising. One morning I took myself off for a short walk, to Merdeka Square, and by the time I’d got there, the Factor 50 had sweated right off my skin. I decided it was time to seek out cooler climes, and so I booked a bus ticket to the Cameron Highlands, famed for its tea plantations and temperate weather.

After all of the somewhat chaotic bus journeys I’d made previously in my beloved Indonesia, this one was a pleasant surprise; a well-organised bus terminal in Kuala Lumpur, an air-conditioned vehicle with footrests, and an efficient journey of two and a half hours. I was silently thankful for my complete immunity to motion sickness as some of the other less fortunate souls on board tried to hurl as quietly as possible into plastic bags whilst the bus navigated the twisting mountain roads up into Tanah Rata, the town where I would be staying. Those of us who were able to enjoy the view out of the window were treated to a sneak preview of the area’s attractions – the strawberry farms, glimpses of jungle, and the famous rolling green hills of tea – as we ascended to our final destination.

There wasn’t much to Tanah Rata – it was essentially one main road with a few side streets, featuring a few places to stay and some restaurants – but it was a great jumping-off point to exploring the highlands. There are only a handful of hostels in the town, so it’s worth booking in advance; I stayed in Father’s Guest House, a gorgeous little place recommended by a friend. The beds in the dorm were possibly the best I’ve ever encountered, complete with cosy duvets, and the garden terrace was the perfect spot to sit and drink cup after cup of tea whilst catching up with writing and watching the afternoon rain shower.

The Cameron Highlands grew as a resort destination during the time when Malaysia was under British rule, as a spot where British expats would go to take a break from the hot climate elsewhere in the country. The irony was not lost on me, that this was pretty much what I was doing! The temperature reminded me of a good British summer – warm by day, but cooling down to cardigan weather at night – and with pretty much everyone I met, British or not, the delights of the climate featured in our first conversation (talking about the weather is very much a British thing – have you noticed I tend to do it a lot in my posts?!)!

I chose to take a group tour, booked for me by the hostel, which covered the main tourism points of the area. The first stop was the Mossy Forest on Gunung Brinchang (Brinchang Mountain). As its name suggests, all of the trees in this tropical forest high on the mountainside are covered in moss, which grows copiously due to the elevation. Some of it is now closed, as the tourist footprint was damaging the flora, but there are still walkways open, from where you can enjoy the mystical atmosphere of the greenery. It was then onto the tea plantations, the centrepiece of the Cameron Highlands, and the “Green Carpet of Malaysia” was just as spectacular in real life as it had appeared in the photographs that I’d seen. And we of course stopped to enjoy a cup of the local brew in the cafe there! Strawberries are another big thing in the area; I lost count of how many strawberry farms I saw! We stopped at one for a strawberry-themed refreshment break – more tea for me, whilst the others in the group enjoyed milkshakes – before moving on to one of the local markets, where I picked up some local strawberry jam for my breakfasts that week.

Another point on the tour was the Time Tunnel museum, which offers a history of the Cameron Highlands which was considerably more interesting and eventful than I had realised.

The final stop was the beautiful Sam Poh Buddhist Temple in Brinchang. Regular readers will know that I love a good temple, and this one was no exception, with its stunning statues and peaceful, spiritual atmosphere. Another popular activity in the Cameron Highlands is jungle trekking. There are plenty of tours offering this too, but it’s very easy to do alone, which is what I opted to do. You can pick up maps highlighting the various trails, or follow them on the Maps.Me app on your phone (you should download this app anyway. I only recently discovered it and it’s amazing; you can download maps of entire countries and then use them when you’re offline, so it’s perfect if, like me, you don’t bother buying local sim cards). So long as you choose a path that suits your hiking ability, and avoid any which your hostel advises you to steer clear of, it’s perfectly safe to go it alone (yes, even as a woman – despite what a young man in my dorm decided to try to lecture me on!), and there’s something very satisfying about trekking through the jungle by yourself! I started on Trail 4 and moved onto Trail 6, before walking back to Tanah Rata along the main road, and apart from a few slippy moments, I had no mishaps – and didn’t even get lost! With the relief from the heat of the Kuala Lumpur, the beautiful thunderstorms to watch nearly every night, and the abundance of tea, the Cameron Highlands made for a great spot to relax and to get out of the city for a while. It’s no surprise that it’s so popular with local people and tourists alike. I could easily have stayed a lot longer.