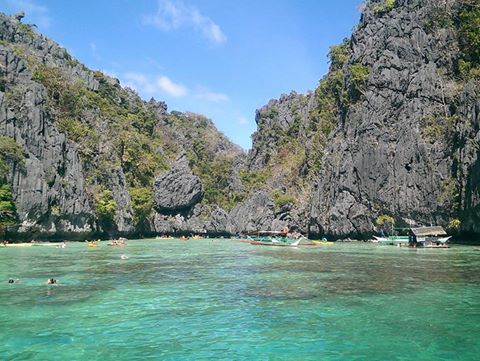 When I started researching the Philippines, pretty much everything I read highlighted the town of El Nido on the island of Palawan. It was supposedly not yet swamped by tourists, beautiful, and with plenty to do and see. After several months of British winter followed by two weeks in chilly Japan, I was ready for some tropical beach time, and so the morning after my Honda Bay trip, I boarded a van in Puerto Princesa for the six-hour trip north.

It was a bumpy ride in – there is still a small section of the road unconcreted, and the surface where it exists isn’t always great either – I was glad that I had at least paid a little more to take an air-conditioned van rather than the bus. The scenery on the journey was beautiful however; small towns nestled in front of the dense, green jungle. My plan to do some writing on the way was totally thwarted by the bumpiness, so I spent the whole time just looking out of the window instead.

For my first five nights, I stayed in Corong-Corong, slightly outside of El Nido proper. A long walk or five-minute, 50 peso trike ride to the town, it was a very quiet place. This had its advantages; a ridiculously cheap private ENSUITE room in a hotel – for the first and quite possibly last time this trip! – and a beautiful stretch of beach just outside, which I shared with very few other sunbathers. The disadvantages were a lack of options for restaurants, shops and bars nearby, as well as sea that, though beautifully blue and clear, was too shallow for swimming. This seemed like the perfect place for a couple or family to get away from it all and relax on a holiday, but for a solo traveller a couple of days there was enough. I had only booked three nights originally, and had intended to move into El Nido proper afterwards, but on the second night my luck ran out with eating seafood abroad, and the next say I didn’t really feel up to traipsing around looking for a bed, meaning that I ended up extending my stay to give myself some breathing space. The affordable accommodation featured on the online booking sites get snapped up very quickly in El Nido, so if you come here without much pre-planning like I did and many do, you will probably find yourself walking around the few streets of the main town looking for a room. It took me a couple of hours, but a chance turn up a small alley next to the Art Café and Boutique led me to Hakuna Matata, the hostel which became my home for the next week, Basic but cheap, friendly, featuring a lovely terrace to chill out on, and right in the middle of El Nido, this was a great base for exploring the area. I had been considering only staying for a few days and then leaving Palawan and heading to Borocay, but I’d met several people in Puerto Princesa who had come from there and said that it was indeed beautiful, but just saturated with tourists, too many for the tiny island to cope with. This put me off the idea, and I wasn’t relishing the idea of more plane journeys so soon anyway, so I decided to book my hostel room for a week and catch up with blogging and writing and take a break from being on the road. It was hard to shake that guilty feeling of wasting time or not making the most of my day at first, but I kept reminding myself that this is long-term travel and it’s not only OK, but actually a good idea to have slow weeks to catch up with life and save some pennies.

The most popular activity in El Nido seems to be the island-hopping tours. There are four options, labelled A to D, and every other shop and establishment in the town offers them. I took Tour A (booked through the Art Café) which focused on lagoons. The first stop was the “Big Lagoon”. The boat anchored just outside of the entrance, and I swam (alternatively you can wade or rent a kayak) through the opening to be greeted with the sight you often see in photographs advertising El Nido – a corridor of ragged cliffs framing perfect turquoise water. At this point I was wishing I’d purchased an underwater camera, or had the guts to trust the apparently waterproof plastic case I had bought for my phone! There were plenty of Go-Pros and selfie sticks amongst those in the kayaks as we navigated our way through. I enjoyed swimming – the water was beautiful. Every time I go to the sea I like to float on my back, point my toes at the sky and take a mental snapshot of the scenery behind my feet; this was the prettiest one yet.

The second stop was the “Small Lagoon”. As the name suggests, it’s not so large as the first, but still picturesque. Everyone else on my boat chose to hire kayaks but I swam again. This was a tough one; currents, large waves around the entrance, and very sharp rock jutting up from the sea bed. I managed, but I would recommend the kayak option to anyone who isn’t a strong swimmer.

Here is a good point to note that on these tours you will get very wet, even if you avoid swimming; you will always need to wade through water to get on and off the boat, and between islands you will most likely be splashed as the boat speeds through the waves. I’d say that a dry bag for your possessions is essential; you can rent them in El Nido, but I have this one

and found it to be effective.

The next stop took us to Matinloc Island. Here we climbed through the rock to the “Secret Lagoon” – full of people and not particularly impressive sadly! – then relaxed on the beach whilst our crew prepared our lunch; grilled chicken, fish, vegetables, rice and watermelon and pineapple, as usual on these trips. Once lunch was digested, it was back to the boat and off to a stretch of water between two small islands, where the snorkelling was supposed to be excellent – unfortunately we found the water to be a bit murky that day, so I will never know what lurks beneath!

The lagoons done, the last stop was Ipil Island, where the sand was fluffy and white and the sea was good for swimming, for a relaxing final hour of the tour. The author Alex Garland is said to love the Philippines after travelling through the country and staying for six months in El Nido – before he wrote The Beach. The town therefore likes to claim that here was the inspiration for the book, even though it was set in Thailand. Looking at these remote islands and their stunning lagoons, it’s easy to see how he might have found the inspiration for his modern classic amongst them.

Many visitors take more than one of the tours. I enjoyed Tour A, but I also heard very good things about Tour C too.

I spent the rest of my time in El Nido going for walks, sitting on the beach, and doing the aforementioned catching up on life, but there are plenty of other activites beyond the island-hopping to do too; you can hire a kayak and paddle out to the island across the bay, or hire a motorbike or take a trike to nearby beaches. Unfortunately these are all expensive options for a solo traveller, so it’s probably best to make some friends in your hostel or guesthouse for these!

People talk about El Nido as a tropical paradise which is an alternative to packed Borocay. It was indeed a beautiful place, and less dominated by tourism than the European resorts I have visited in the past; there was always plenty of space on the beach, and there are just as many local children on their way to school padding along the sand as there are bikini-clad visitors. There’s still lots of evidence all around of the daily local life here. However there are still plenty of tourists, food and drink is expensive compared to the rest of Palawan, and as you walk down the street people will try to sell you coral jewellery, boat trips or trike rides to beaches or waterfalls, so it is not quite the unspoiled beach town that some people make it out to be. I’m glad I came to El Nido and will always remember its beauty. However, once I’d packed my bags and decamped a few hours south to Port Barton for my final few days in Palawan, I found myself wishing I’d left for this new spot earlier…