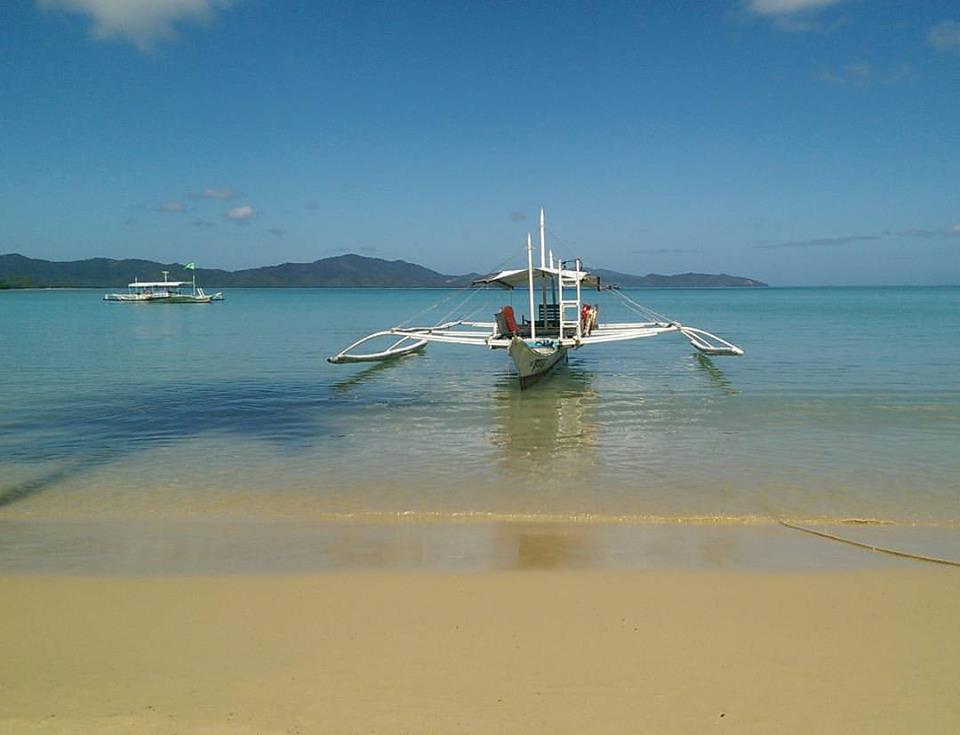 I had three days to go until I had to embark on the trek back to Puerto Princesa to catch a flight to Manila then Legazpi to resume my volcano-chasing. As lovely as El Nido had been, I was ready to move on. I’d read and heard many good things about Port Barton, a much smaller seaside resort about halfway between El Nido and Puerto Princesa; given that it was on the way back to where I needed to be, it seemed the logical place to spend my final few days on the island of Palawan.

About three and half hours after leaving El Nido on another bumpy van ride (this time we had to stop and wait whilst a digger finished setting out enough road for us to get by), I was deposited at the Port Barton tourist office, where a helpful lady gave me a map and pointed the way to my hostel. There’s not much accommodation available online in this area so many people just turn up and book into one of the beachside cottages or hotels. As a solo traveller on a backpacker’s budget I however didn’t want to risk ending up somewhere costing more than I’d hoped to pay, so I’d booked into Port Barton Homestay via their Facebook page in advance.

My walk to the hostel took me along a beautiful beach – that fluffy white sand and bright blue sea with banca boats moored along the shore again – and up a path into the Fisherman’s Village, where I soon found the bamboo gate leading into the hostel. I can’t recommend this place enough – Leizel, the lady who runs it, was an absolutely wonderful host. She gave us all tips on what to do and where to go, arranged my van back to Puerto Princesa for me, and took us out to find the cheapest local food (I developed a love of pork adobo whilst here!) and, of course, the cheap rum (warning: this may or may not lead to you joining the live band on stage to play bongos and sing Madonna songs. Not me though. Of course not. Ahem.). Leizel’s simple house is beautiful; I loved the outside bamboo shower, listening to the waves crashing as I washed my hair! There was a lovely viewdeck too, for catching those sunsets or sunrises. Having spent most of the previous week on the beach, I decided to start my first full day in Port Barton with a hike up to a nearby waterfall, Papawyan Falls. From where I was already at the north end of the beach, it was a fairly easy trek of about four kilometres, through lush greenery and over tinkling brooks. Just over an hour later and the final ascent opened out into a rocky watery clearing with the falls just ahead. It wasn’t the most spectacular of waterfalls, but I enjoyed the walk and taking a brief dip in the fresh cold water. It was Sunday and as I was sitting on the rocks drying off, local families began to arrive, carrying bags of food for a picnic lunch. I watched some boys climbing up above the falls and jumping in, but the water was far too chilly for me to be brave enough to attempt anything like that! On the way back down I passed lots of people going up; I was glad I had gone early before the place got too busy. Bizarrely, I was also asked for photographs twice; once by a family, and once by a group of teenagers who wanted a selfie with me. I was probably in lots of people’s Facebook uploads that day I think!

After a well-deserved lunch of sweet and sour fish (another favourite I’ve picked up in this country) I wandered around a little bit and then sat on the beach. Port Barton was much smaller than El Nido, and also much quieter; it was nice to not have people trying to sell me things at every street corner!

Talking of selling things, I noticed many familiar-looking stalls; those selling island-hopping tours labelled A-D, just like in El Nido. They were different islands but the tours took the same format, and were half the price of those in El Nido. I didn’t take any of them, but everyone else in my hostel did and they said they were fantastic.

I spent my second day mostly being a beach bum; or a sea bum to be more accurate. The water was perfect for swimming, becoming deep very quickly. I had heard that there were problems with jellyfish sometimes but I didn’t see even one. I’m quite possibly at my happiest when I’m swimming towards the horizon, or floating around looking at the scenery! After one final night of pork adobo, pumpkin soup and too much rum, it was time to leave – and I was genuinely sad to be going. I’ve enjoyed my time in most of the places I’ve visited so far during my trip, and there has usually been something I’ve missed afterwards, or not wanted to leave, but usually I am ready to move on to the next stop. This time I really wished I could have stayed longer. It was so peaceful and life was very laid-back and simple; I wasn’t even missing 24-hour electricity (the electricity in Port Barton is only switched on between 6pm and midnight). The three days I spent there were good for me, and had I known that was going to be the case, I would have left El Nido earlier. Hindsight is a wonderful thing! But now it was time to leave; there was a volcano waiting for me on the other side of the country…