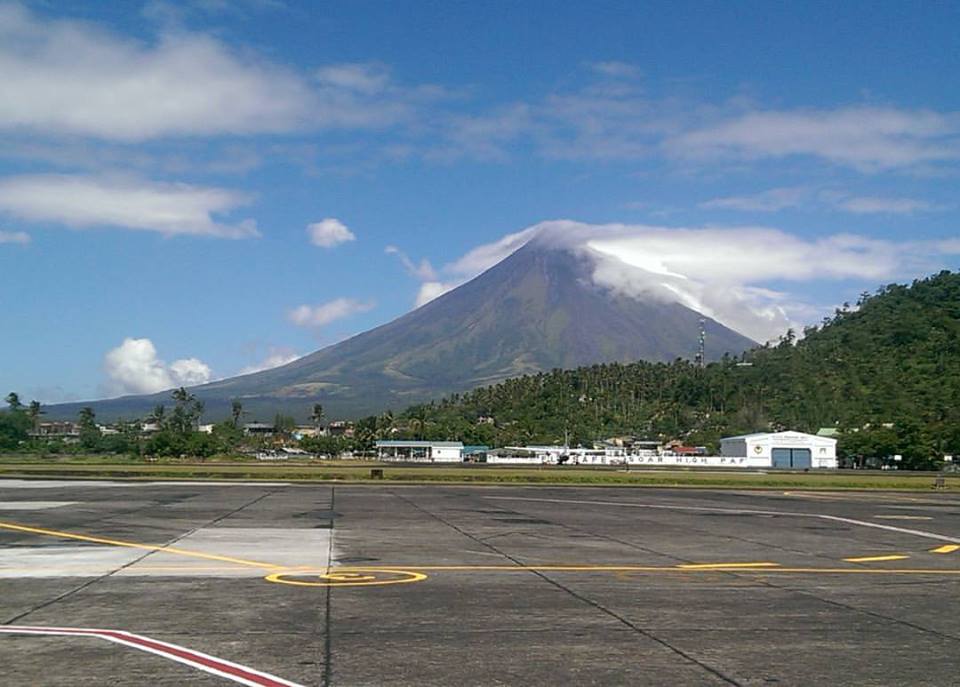 It was a promising start. Stepping down from the aeroplane at Legazpi Airport, a 45-minute flight from Manila, I was greeted with the magnificent sight of a perfect cone volcano – the stereotypical volcano if you like – with a few wisps of cloud lurking around the top. The flight crew had requested passengers didn’t hang around or take photographs during the walk across the tarmac to the arrivals building, but of course everyone, myself included, did. This little bit of rule-breaking turned out to be one of the best decisions I’ve made, as this would be not just the first, but also the last time I’d ever see Mount Mayon in her full stature.

Mayon is one of the most active volcanoes in the Philippines, but it is also known as the shy mountain. Cloud often obscures the top and there’s an element of luck in whether you’ll get any good photo opportunities during your time there. Encouraged by my initial success in volcano-spotting, as soon as I reached my hostel in the nearby city of Legazpi, I headed up to the roof terrace to take another look, only to find that the cloud had rolled over already. I’d read that this was often the case in the afternoons, and the mornings are best for viewing, so I wasn’t too concerned, although I was less than impressed with the torrential tropical rain that was now coming down hard!

I began the next day with a trip upstairs, to find only grey mist where I knew the mountain was. Over breakfast I got chatting to a family who were staying in the room opposite (hello Steve, Cathy, Katie and Tom if you’re reading!), and we all decided to go together to Cagsawa to try to get a better look, despite the weather forecast not looking very positive.

Cagsawa Ruins are what’s left of the town, which was destroyed in a massive eruption in 1814. Pretty much all that’s there (apart from the souvenir and juice stalls) is the bell-tower of the church where many died, still today visibly blackened from the boiling cloud of rock and ask that blasted through it. Search online and you’ll find many pictures of this tower with the volcano looming behind it. I’m afraid however that below is the best that I could get! Despite the weather it was still interesting visiting Cagsawa and seeing the evidence of how dangerous and destructive Mayon can be. It also gave me my first and thus far only opportunity to have a go at riding a jeepney, which was something I had been wanting to try. It was fairly easy; we made sure we knew which route we were looking for and in which direction, then simply headed up to the main road and found a suitable spot to wait. When a jeepney with our route printed on the side pulled up, we double-checked – “Cagsawa?” – with the driver, then squeezed on. Another passenger told us the fare and we passed our pesos up to the driver. The journey took about 30 minutes and was a much cheaper alternative to using the trikes.

From Cagsawa you can ride a quad bike towards the volcano and then do a little trekking (the public can only go a short way up as it’s spewing out dangerous gases all the time). I had been looking forward to trying this, but with cloud hiding Mayon almost entirely from view, and the rain coming down heavily again, I decided that it wasn’t worth spending the money on; I’d save my limited pennies for exploring another volcano that I could actually see!

That night, strange and inconsiderate dormmates kept me up all night, so I was already awake when the early morning, supposedly the best time to glimpse Mayon, rolled around. I made attempts and 6am and then 7am, but it was another miserable day and once again, if you didn’t know the volcano was there, you’d think that all there was above the trees was grey sky.

Sleep deprivation and weather aside, this was my last day in Legazpi, so I was going to give the volcano-chasing a go anyway. My destination today was Lignon Hill, a popular viewing spot for Mayon. A trike took me to the bottom, where I paid the 20 peso entrance fee and began the steep climb up. You can hire a guy on a motorbike to zoom you up, but I’d been consuming too much rum, noodles and rice recently, so the calorie-burning was needed! The rain held off at least as I trudged upwards for about twenty minutes, before turning the final corner and finding myself with what would be a fantastic view of the volcano, if it wished to co-operate. There were plenty of other visitors up here, so it wasn’t just me who was feeling optimistic that day. Many of them were having a go on the zipline which runs down the hill, another way to experience the view (when it’s there!). I sat down on a bench and resolved to wait. There were a few moments when the cloud looked like it might be shifting, but after a while I had to concede that I was unlikely to see the cone that day, and when the dark grey threatening rainclouds came overhead again, I decided to call time on the whole thing.

There was one last chance to see Mayon of course – at the airport, the place where it all began so well, as I waited for my flight back to Manila the next day…but it was not to be. I spent around five hours sitting in the tiny departure terminal staring out at a blank grey expanse of sky and an empty runway where the planes were also failing to make an appearance in the dismal weather.

It was a shame to not have been able to see Mayon properly, but it was always a risk when spending such a short amount of time there, and I enjoyed my two days anyway. I made some new friends in the hostel, was the resident expert on Palawan for the other guests who were heading that way afterwards, and it was an experience to see the ruined church and to just be close to such a significant volcano.

And at least Mayon didn’t then do a Sakurajima on me! Not yet anyway…