In search of New Zealand’s volcanoes: Auckland, Rotorua and Taupo 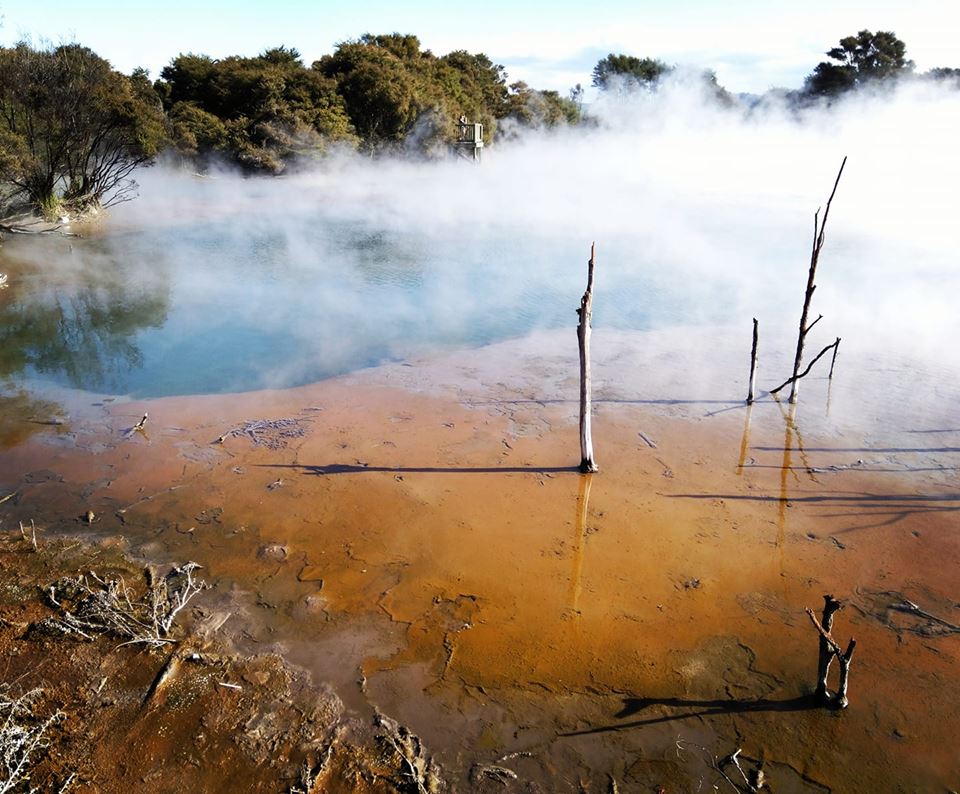 When I told people that I was going to visit New Zealand on my way home from Australia, they all told me to head straight to the South Island for its stunning scenery. However, the thing that had drawn me to the country in the first place was the North Island and its own special charms in its spot just inside the Pacific Ring of Fire – meaning, of course, volcanoes! I knew that I wouldn’t be seeing the same kind of activity that I witnessed in Indonesia, but given that it had been a while since I had explored any volcanic landscapes, I was keen to be back in my favourite kind of environment.

My first stop was Auckland, New Zealand’s largest city. My hostel (one of the Haka Lodge properties – I’m afraid I had to switch my allegiance away from my usual YHA, lured by the curtains and individual lights and plug sockets for each bunk offered by Haka!) was full of Working Holiday Visa holders looking for jobs and rooms to rent, but tourists like myself were thin on the ground. The general feeling is that there isn’t much to see in Auckland, but I was intrigued by the field of around 50 active and dormant (and therefore potentially active) volcanoes which sit under the city. Some are a lot more obvious than others. Rangitoto Island, out in the bay, is a volcanic island which is a popular day trip, but unfortunately my knack of only ever getting sick when travelling meant that I was unwell for the few days that I was in the city, so I wasn’t able to make it out there. I was able, however, to muster the energy to climb Maungawhau/Mount Eden on my last day there, a dormant, fairly small (as they go) cone volcano which has a clear-cut rim and crater and offers fantastic panoramic views across the city centre. I sat at the top for a while and pondered upon how indifferent the locals appear to be to the fact that they are living, playing and working on top of such a potentially volatile piece of geology. True, these volcanoes have been sleeping for a long time (and are being monitored), but eruptions are still fairly difficult to predict accurately, and it’s likely there wouldn’t be that much warning. Some researchers have created simulations of what might happen if one of them went off but generally, the people living here don’t seem to give it much thought. Standing on top of Maungawhau/Mount Eden, just outside of the city centre, however, it really struck me how catastrophic an eruption here could be (remember that silly but very entertaining 1990s disaster film Volcano, and how ridiculous the premise of a volcano popping up underneath Los Angeles was? I feel like something akin to the events of that movie could actually, realistically happen in Auckland!). 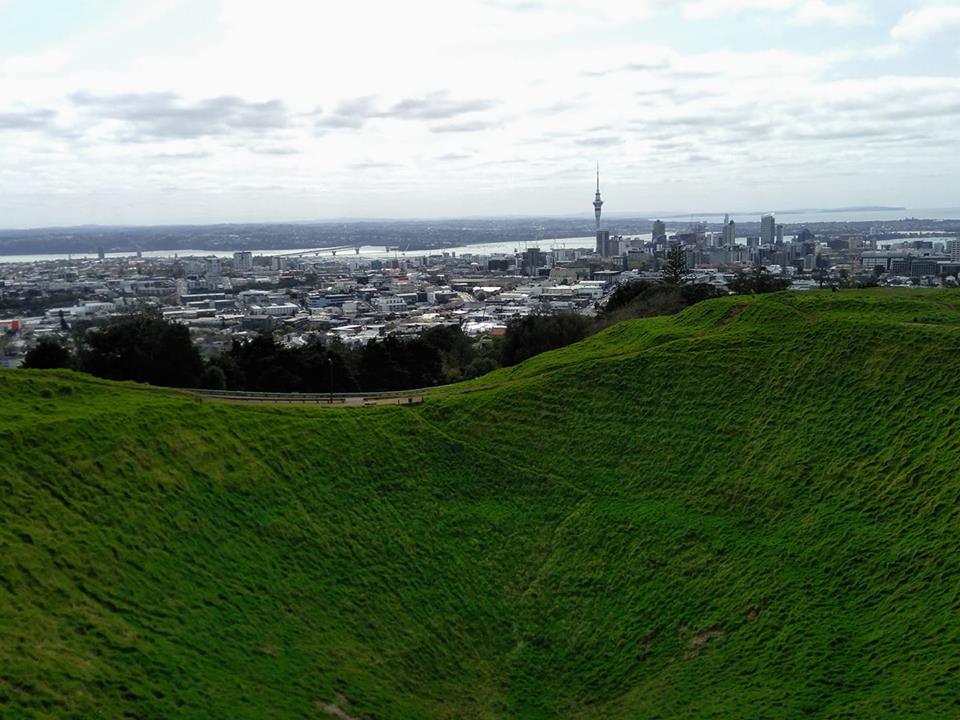 From the crater rim of Maungawhau/Mount Eden

After a couple of days in the city I boarded an InterCity bus (a network which proved to be very helpful for getting around the country for a solo traveller who didn’t want to drive) to travel a few hours south to Rotorua. As soon as I got off the bus, I was hit by that familiar, rotten egg-like stench of volcano, a scent that generally hung around the whole place for the rest of my time there. Others held their noses, but I was happy to be back in my favourite kind of habitat!

You won’t catch the stereotypical volcanic eruption or see any cone volcanoes in Rotorua, but it is a massive centre of geothermal activity on the North Island. Right in the middle of town sits Kuirau Park, a small public park full of bubbling mud pools and boiling ponds. Having seen the steam rising from this spot on the bus ride into the city, this was where I headed straight after dropping my bag at the YHA Rotorua hostel just over the road. Strolling through this geothermal wonderland and taking photographs of everything, I immediately fell in love with Rotorua (and cursed myself for not having secured a Working Holiday Visa for New Zealand while I was still young enough!). It was such a fascinating and wonderful spot to have sitting there in the city, just like you’d find the usual kind of parks in others. 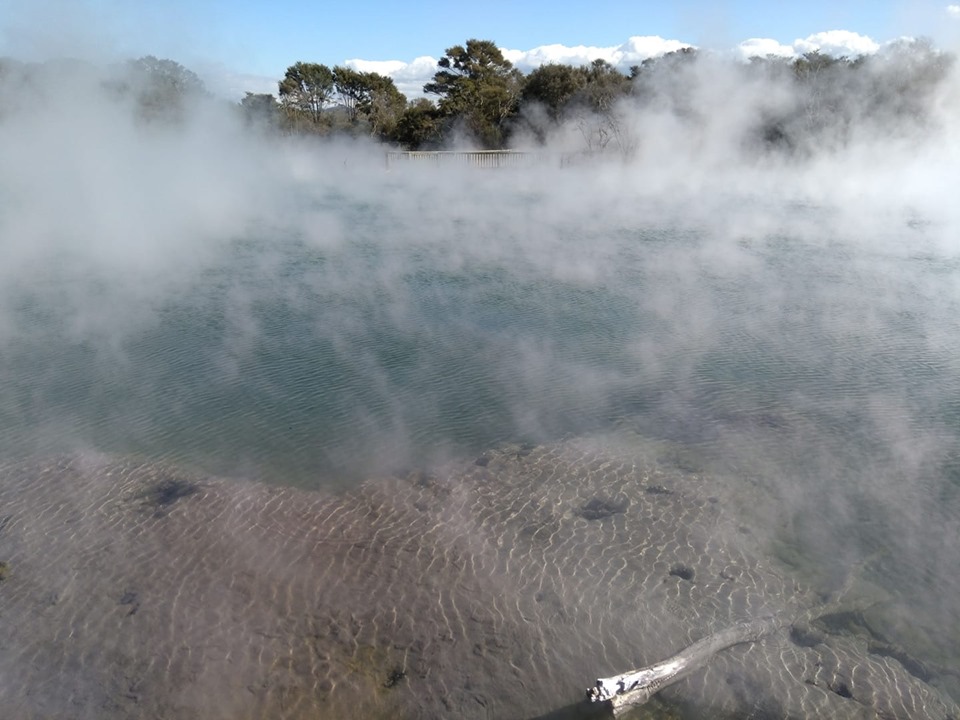 The next day I went out to explore some of the other geothermal areas nearby. I had found a local tour company, Thermal Land Shuttle, who offered a day tour covering both Wai-O-Tapu and Waimungu Volcanic Valley, two of the main spots, which included entry tickets and transfers, but where you were left to your own devices to explore the parks; perfect for an independently-minded solo traveller without a car, like myself. I joined a small group of other visitors early in the morning for the drive out from Rotorua to Wai-O-Tapu, the first stop (via a brief detour to a pretty big and fierce thick grey bubbling mud pool just off the road). 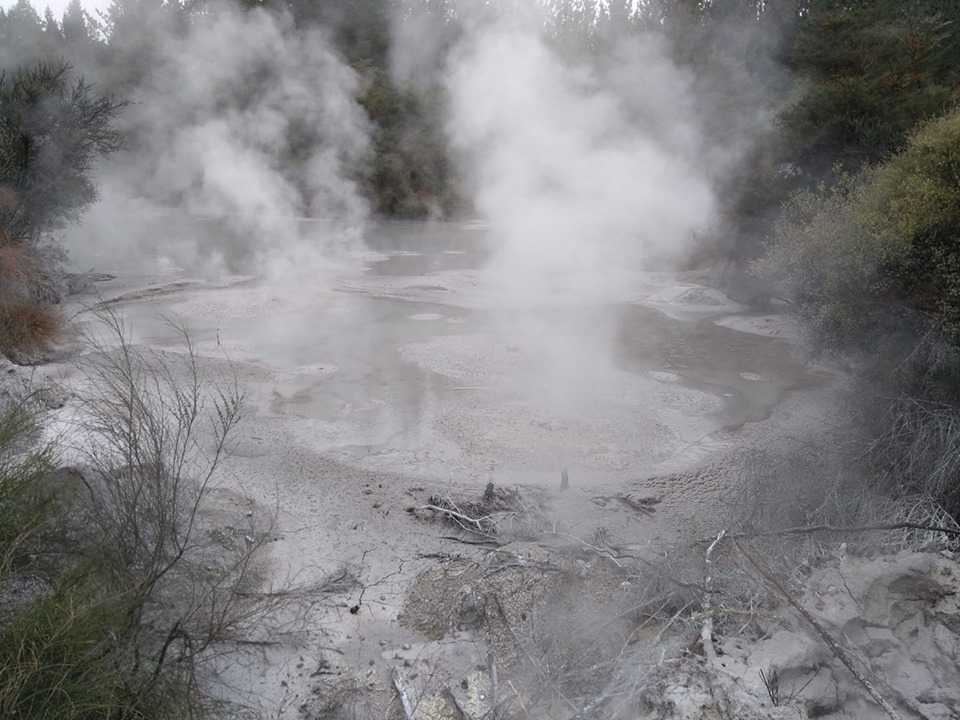 Wai-O-Tapu (meaning sacred or holy waters in the Maori language, one of the official languages of New Zealand and that of the first inhabitants of the country) Thermal Wonderland is, just as its title suggests, a stunning and lively geothermal park. The main area of the park consists of various pools and springs with a variety of intriguing names, including the Champagne Pool, the Artist’s Palette and the Devil’s Bath. The colours in the waters were wacky and almost unreal, and there was a general bubbling, hissing and steaming along all of the walkways; it really was a strange and beautiful landscape. 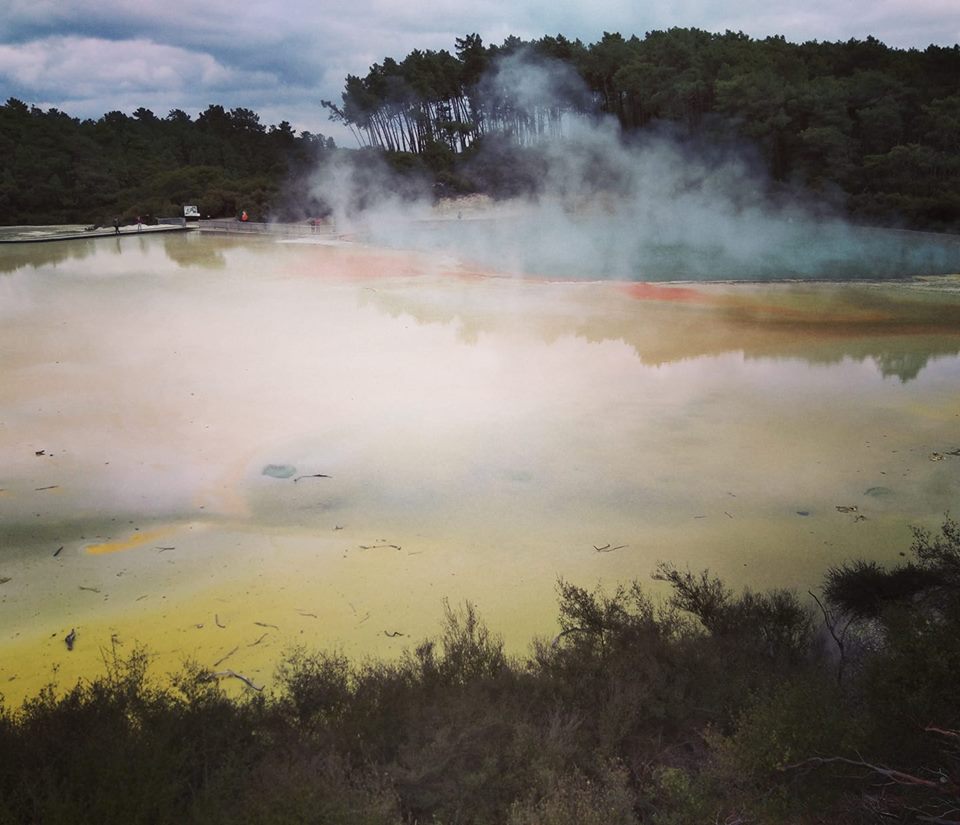 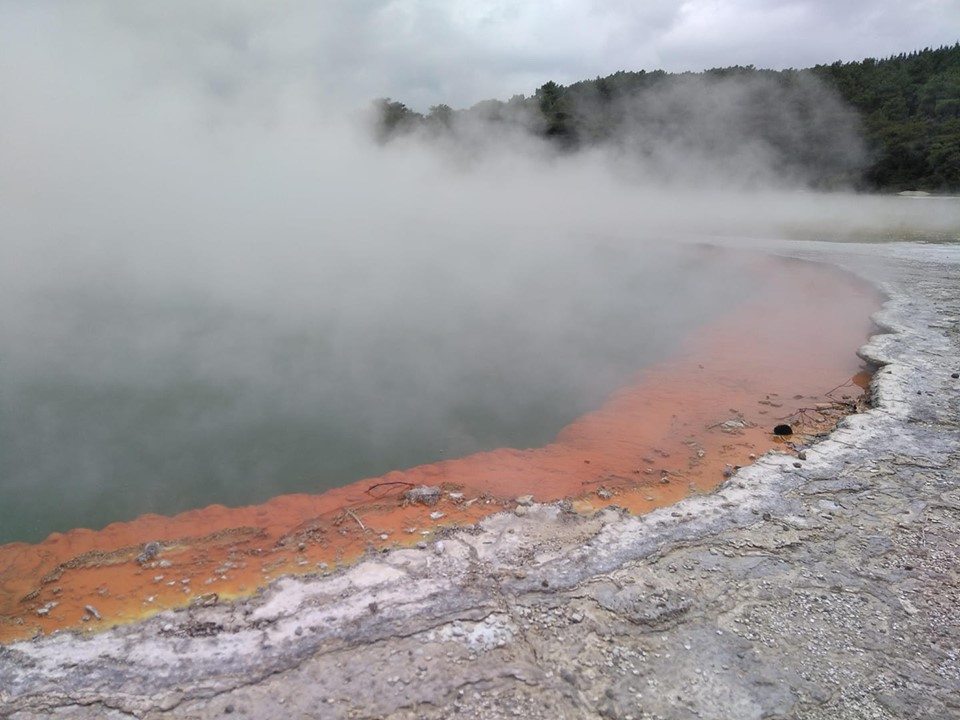 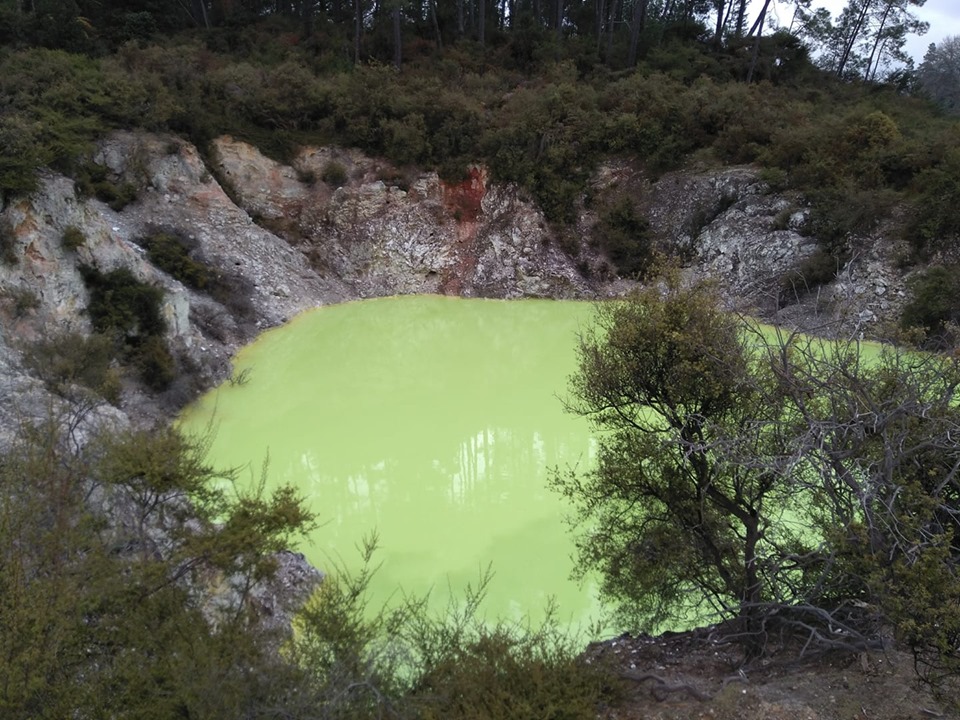 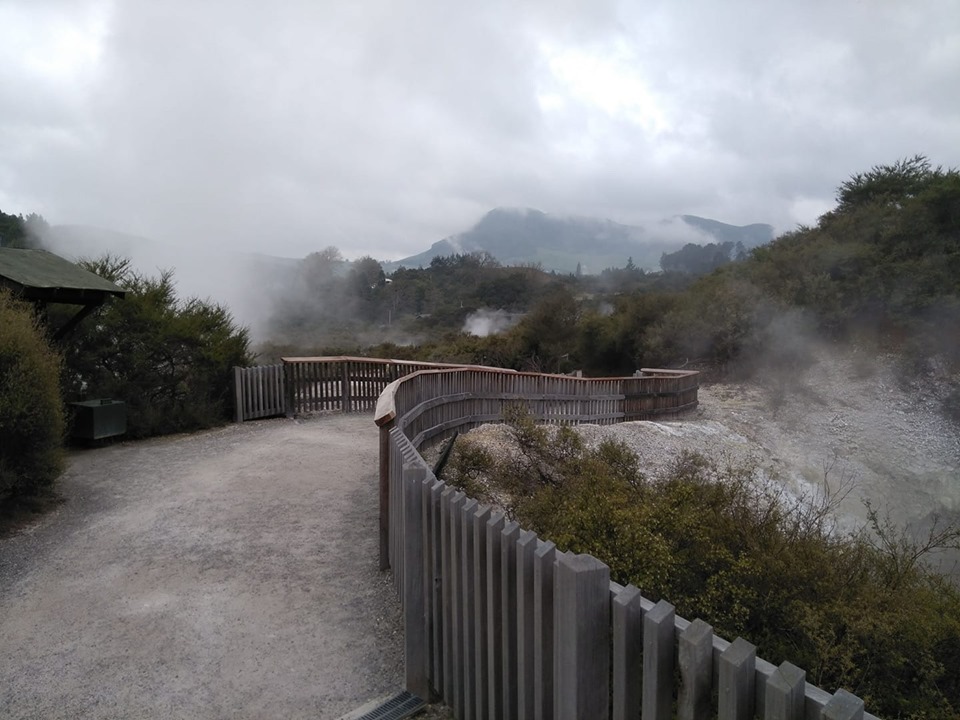 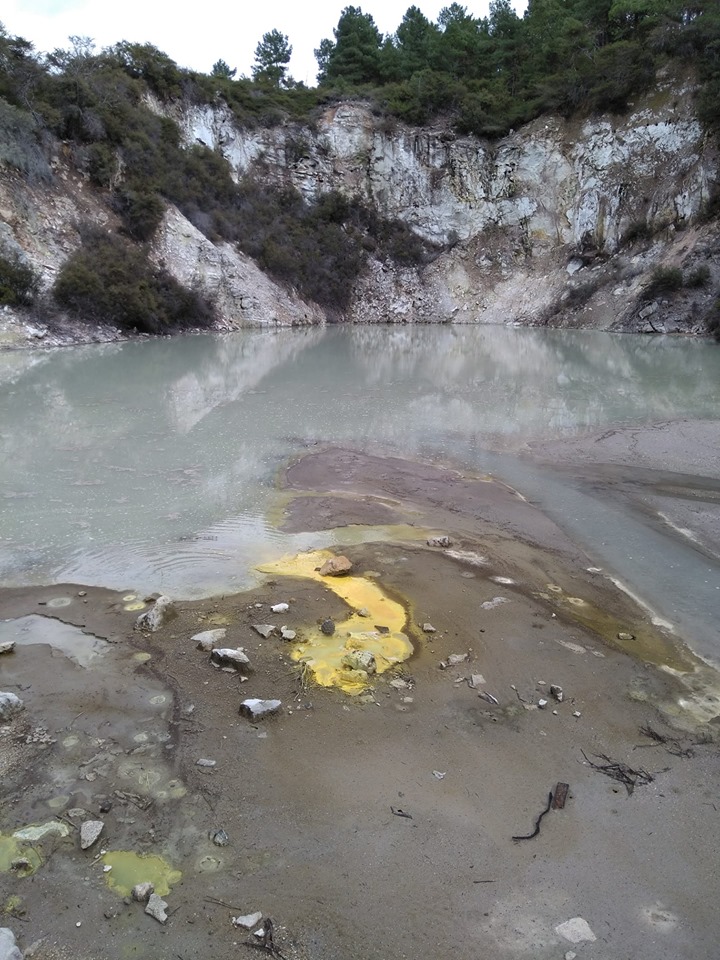 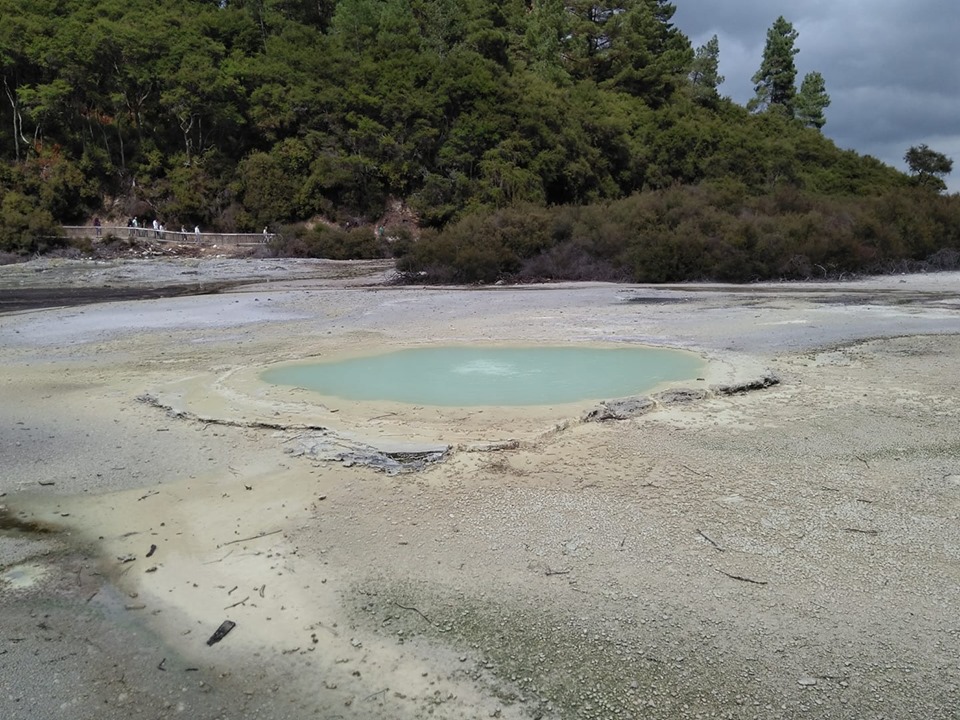 We spent the morning there in two parts, with a reconvening of the group halfway through so that our guide could take us on the short drive down the road to catch the Lady Knox Geyser on its daily eruption. This was actually my first time seeing a geyser in action, and I was pleased that it put on a pretty good show for me! 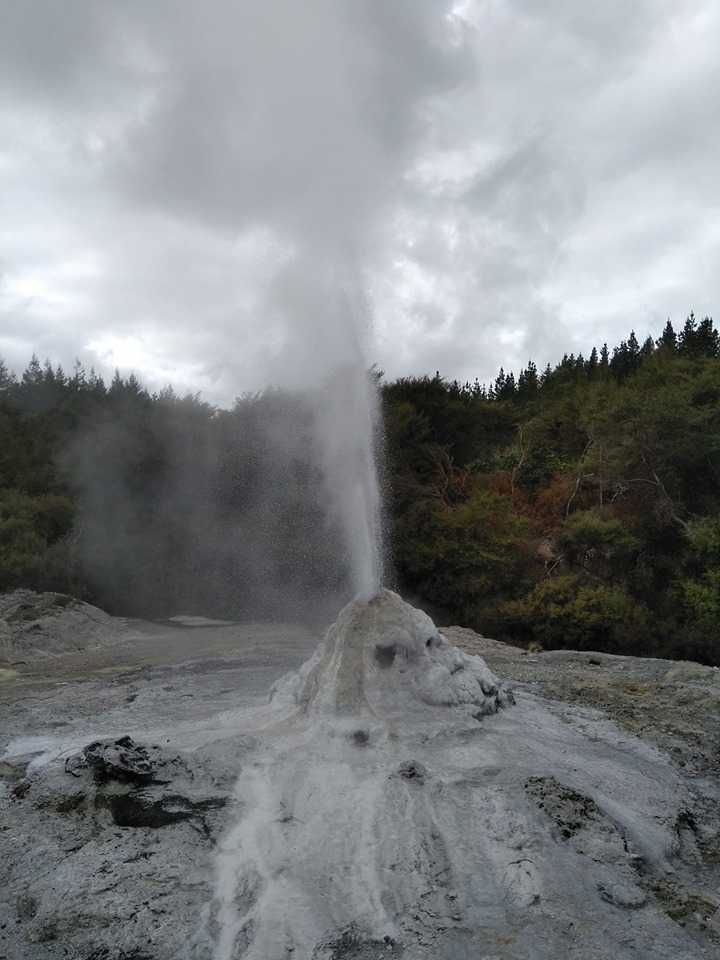 For the afternoon we headed over to Waimangu Volcano Valley, another fairly short drive. This was a totally different kind of experience to that of Wai-O-Tapu. Waimangu is the world’s youngest geothermal system, created only 130 years ago with the eruption of Mount Tarawera in 1886. This renders it fascinating not just because of its geological and ecological features, but because it’s the only example of this level of earth-changing volcanic impact which has occurred in written history. Prior to the eruption, the landscape was entirely different. The area was already a tourist attraction, drawing visitors to the Pink and White Terraces, a series of silica deposits which were so stunning that they were considered by many to be the “Eighth Wonder of the World”. There are watercolour paintings and even some early photographs of this famous spot and other parts of this area, before much of it was blown apart and the famous terraces were buried under volcanic mud (still yet to be uncovered). 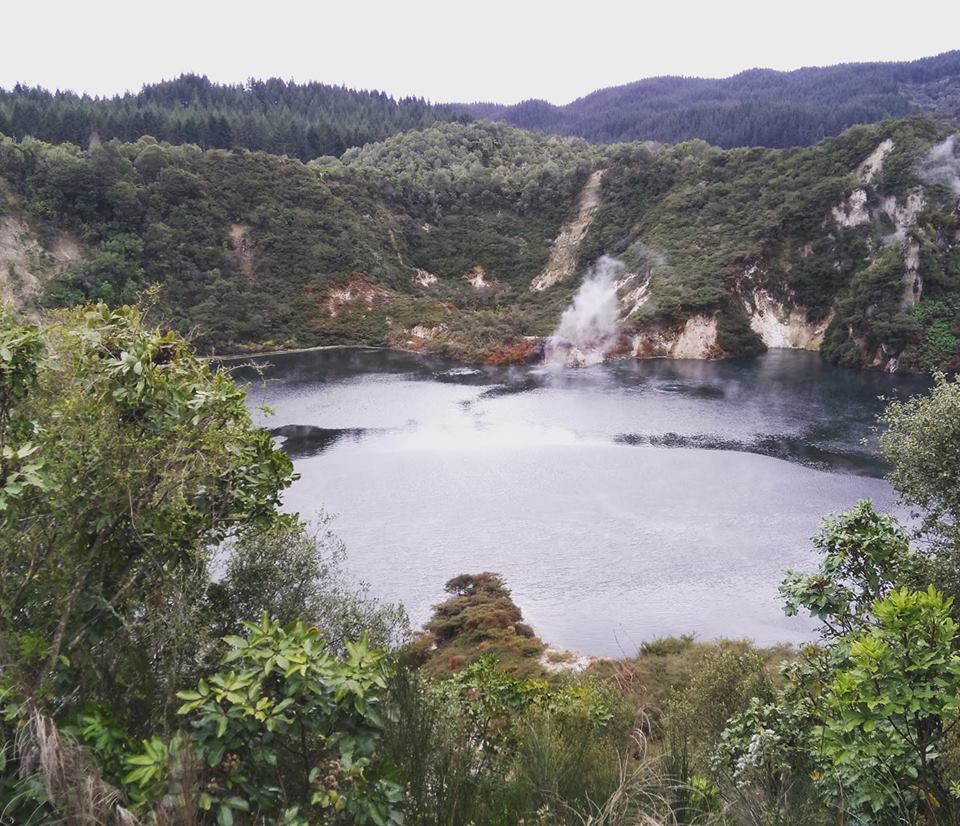 Waimangu seemed to be less popular than Wai-O-Tapu; on my walk through the valley I barely encountered any other people, and I felt somewhat like an intrepid explorer, hiking along past the various craters, pools and springs which can be found in this almost brand-new volcanic ecosystem. 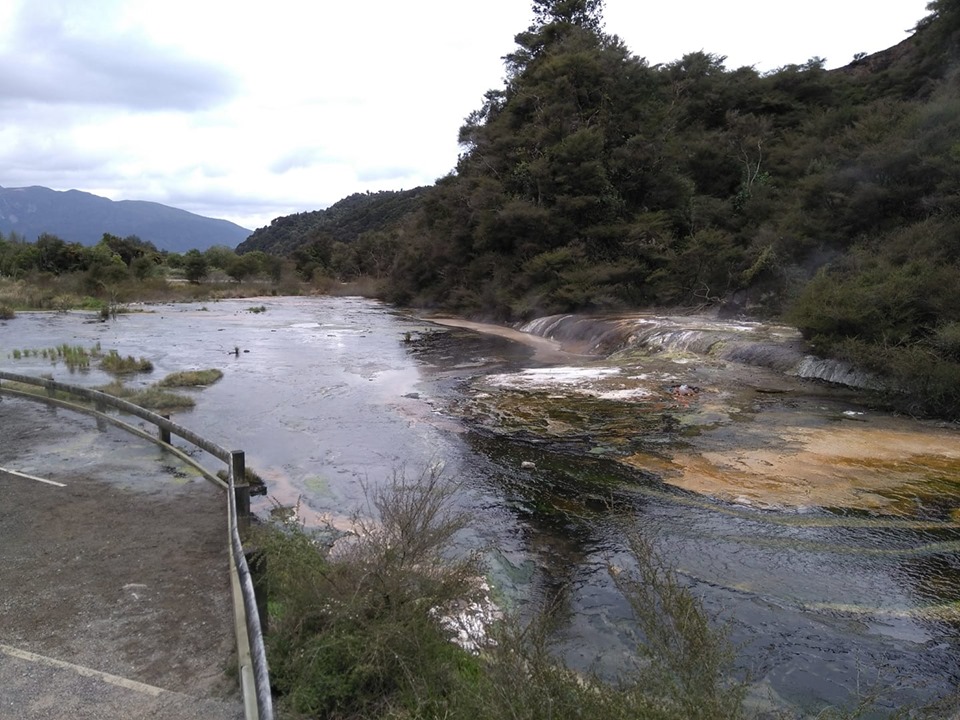 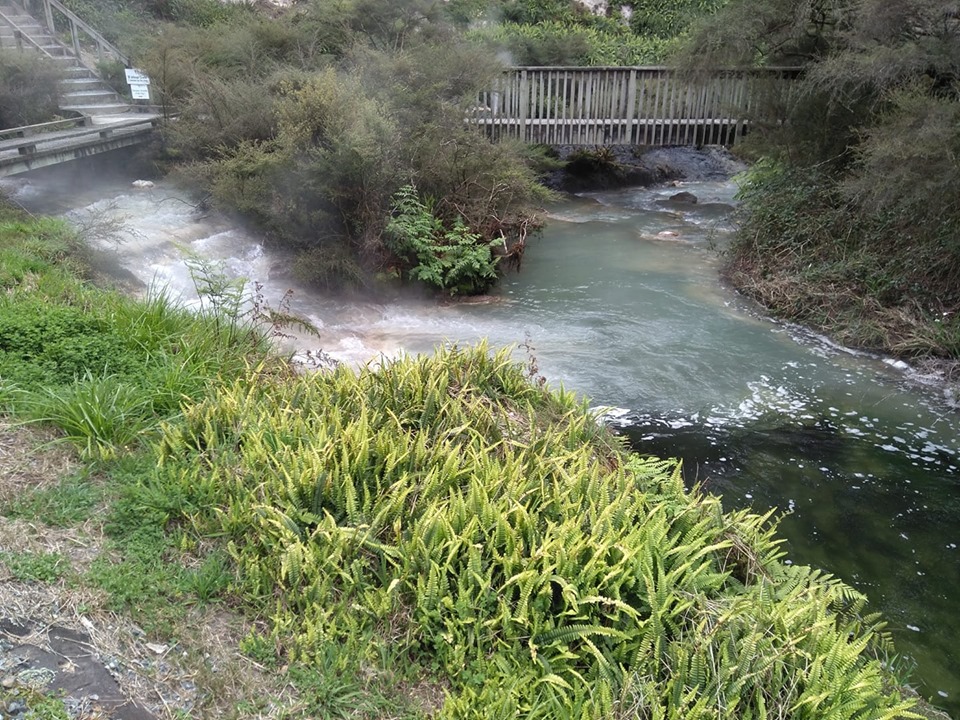 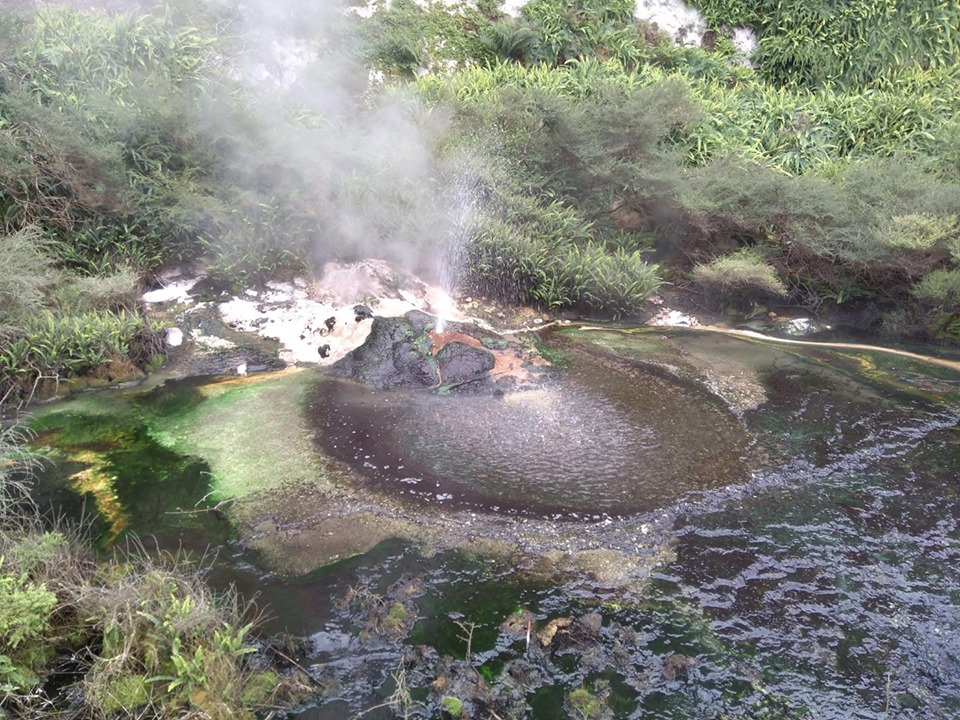 My wandering through the valley eventually brought me to the shores of Lake Rotomahana, a deep body of water which has been there all along but is now deeper than ever after the effects of the 1886 eruption. There are boat cruises which offer alternative views of the landscape, and the area is an important wildlife refuge so it’s a great spot to see some unusual birds (although they were of course all hiding when I was there!). 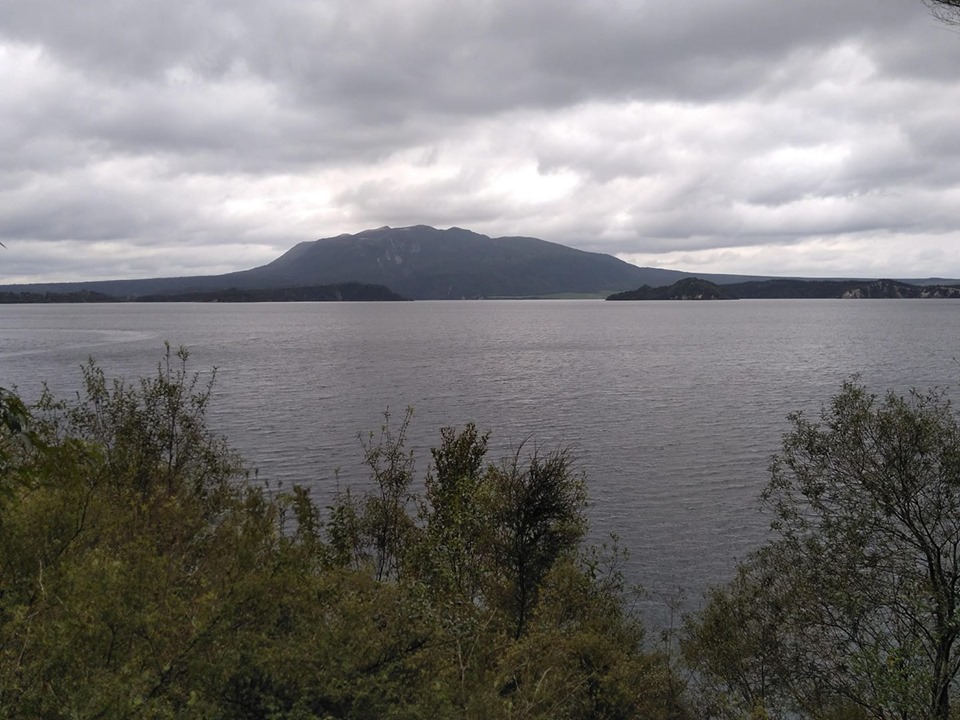 For my final day in Rotorua, I decided to break from my backpacker budget and splurge on entry to the well-known Polynesian Spa, on the edge of Lake Rotorua, for a luxurious soak in the geothermal springs there. It’s a very popular spot in the city but first thing in the morning on a Monday it was free of crowds, and I spent a blissful few hours dipping in and out of the four mineral hot pools of the “Rachel” spring (that’s my name, for those of you who don’t know me!) and watching birds flitting over the lake. When you need to take a break from the hot water, there are geothermally-heated poolside recliners to lounge on. It was a grey and rainy day towards the end of winter, so this was a beautifully cosy way to pass the time. I came out feeling thoroughly relaxed, and feeling that it had been well worth the $50 NZD for a day pass to the pools. 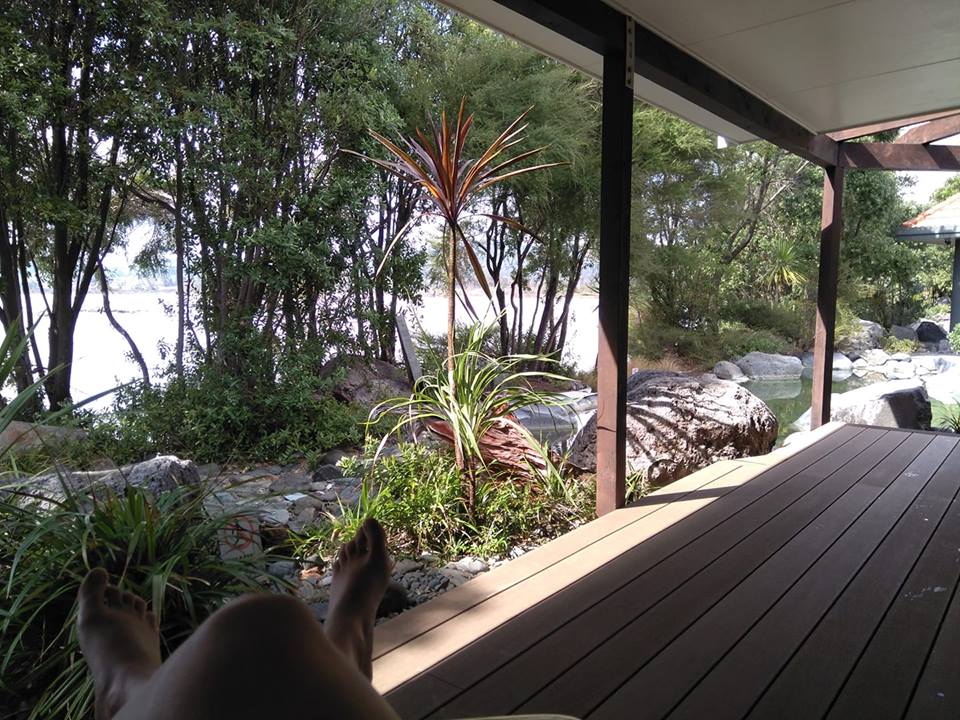 Relaxing at the spa

The next day I boarded another Intercity bus for the one-hour hop down to Taupo, my final volcanic stop on the North Island. I arrived here with the plan of hiking the Tongariro Alpine Crossing, a famous 19 kilometre track passing through a volcanic landscape of craters and lakes. However, the weather forecast was poor, with all of the tour groups and shuttle providers warning that walkers would need to hire snow gear and ice picks, and with my lack of experience of hiking in these kind of conditions, I reluctantly decided against attempting it. While I enjoyed my couple of days exploring the area, hiking up to the phenomenal Huka Falls then relaxing in some natural hot springs on the way down, wandering the shore of Lake Taupo, and soaking up the stunning sunsets over the water and the volcanic peaks of the Tongariro National Park in the distance, I was disappointed to not have made the trek, and resolved that I would need to come back at a more amenable time of year. 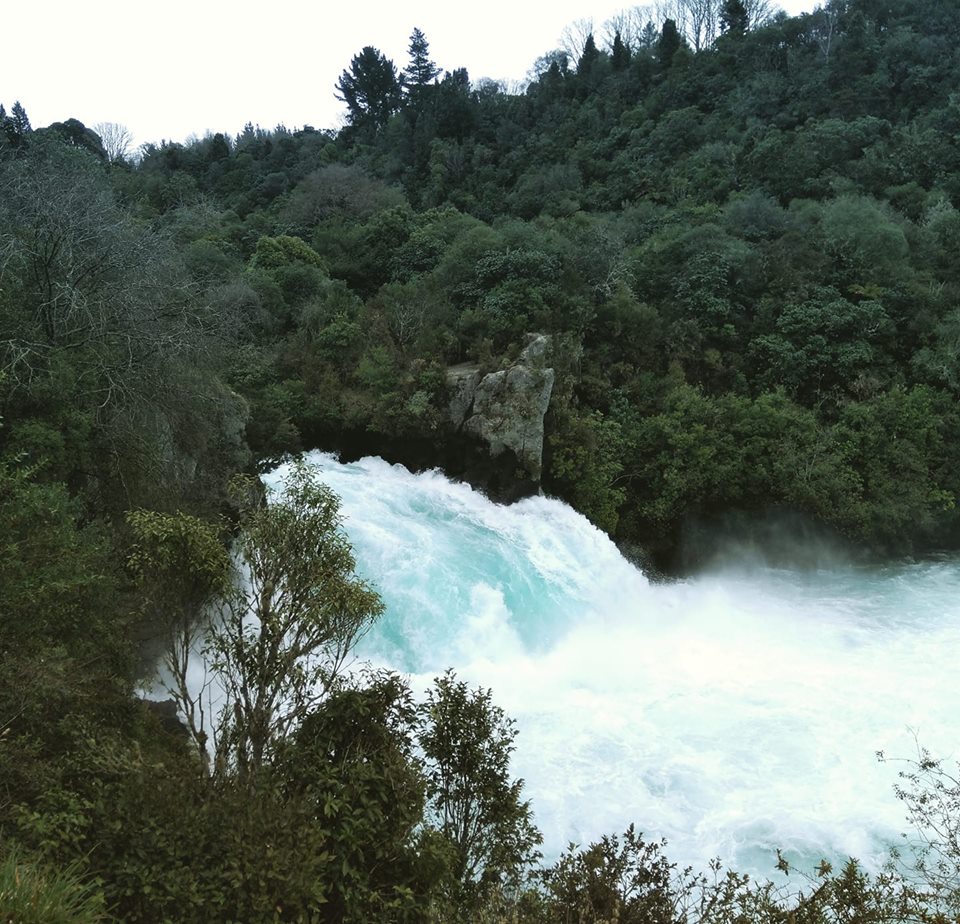 I had a fantastic first experience of the volcanic landscape of New Zealand’s North Island on my brief trip through the area, but there is still plenty more for me to see and do; not just the Tongariro Crossing, but also the Whakaari/White Island volcano, which scheduling and unhelpful weather also rendered impossible to visit this time, and also Mount Taranaki on the west coast, which flew under my radar until I later in my trip met a local who recommended it. I most definitely have a number of excuses to return to this beautiful part of the planet in the future. 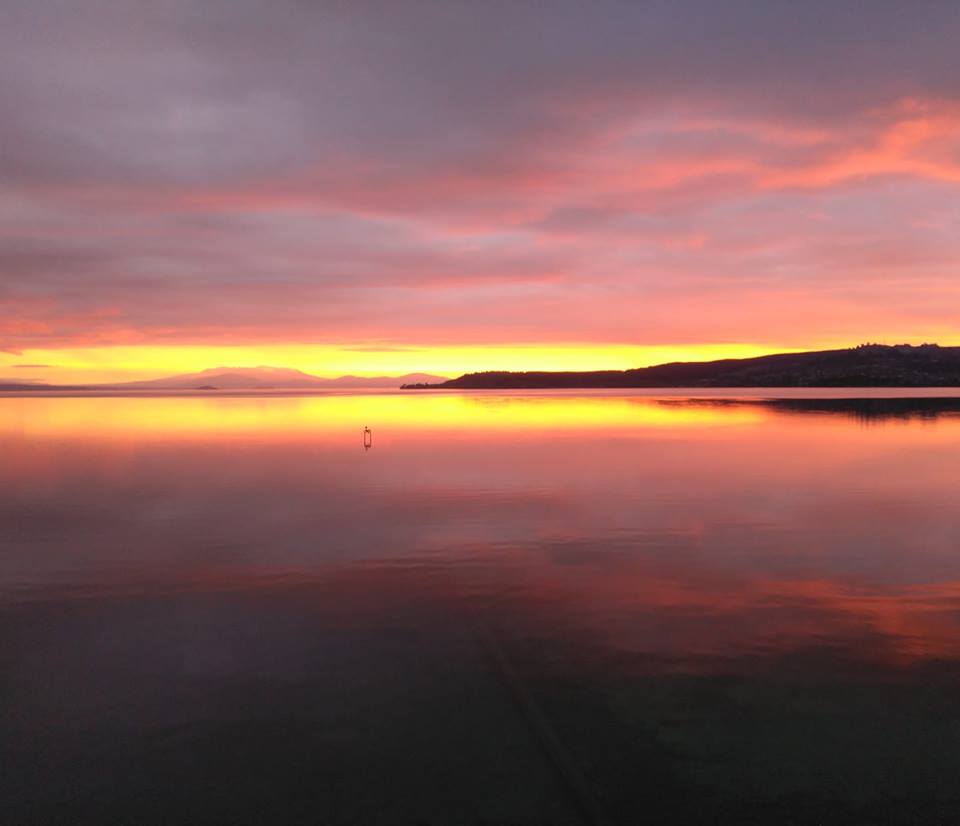 Sunset over Lake Taupo and the Tongariro National Park