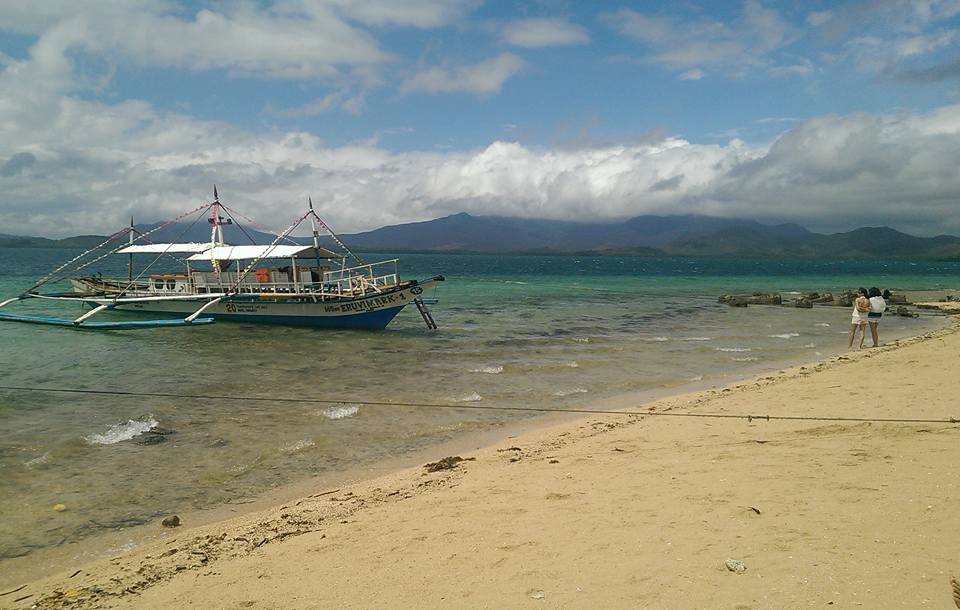 With a spare day in Puerto Princesa before heading up to El Nido, I decided to get started with some beach and sea time on an island-hopping tour in nearby Honda Bay. It’s possible to take a trike to the bay and then hire a boat independently, but I decided to take the easy option of booking a tour; it wasn’t that pricey, it included lunch, and it would be a chance to meet some other people.

The van picked me up early from my hostel (though not as early as they had stated they would – I was now starting to learn how Philippine island time works!) for the 30-minute drive to the bay, via an aqua rental shop to pick up snorkelling masks, and aqua shoes – after initially thinking I wouldn’t bother with the shoes, I changed my mind after the guide told us about the stonefish around the islands!

Things seemed a little chaotic when we reached the port; trikes and vans queuing up, as we were asked to get off the bus and wait in some kind of holding pen! Just as I was beginning to wonder whether we’d actually get to go anywhere, our guide reappeared and called for us to follow him along the road and down a passage which appeared to cut through someone’s house, from where we emerged at the shore with our boat waiting for us a few feet out in the water.

“This is the fastest boat” called our guide, as we waded through the shallows to the ladder. “We will get to the first island more quickly.”

We headed first to Starfish Island; named, as you might presume, after its abundance of starfish. I’m always a bit sceptical when promised potential wildlife sightings on trips, but sure enough, as soon as I stepped into the spectacularly clear water, there they were; starfish all over the place! It was a great snorkelling spot, with plenty of other fish to see too. Whilst we were starfish-spotting, swimming and sunbathing during the breaks in the cloud, our guide and his crew were preparing a lunch of grilled fish, pork, chicken, rice and vegetables, which was lovely to sit down to after some time in the water – perfectly timed too, as it began to rain. After lunch, and with a clear patch emerging in the weather, we headed off to our next stop, Luli Island. The water was a little too murky that day for good snorkelling, but I very much enjoyed jumping off the diving platform into the sea! Not the best picture – the weather was not co-operating!

Our final stop was Cowrie Island. With the weather now improving, this was a beautiful spot for some sea-swimming in clear waters as warm as a bath (certainly warmer than the cold showers you find in the hostels and guesthouses on this island!). Bobbing around in the waves, I was very much looking forward to heading north the next day for some more beaches. I enjoyed my tour in Honda Bay, but I wouldn’t suggest coming to Puerto Princesa specifically for it; especially if you are heading to El Nido, where there are multiple, more spectacular (in my opinion) island-hopping tours every day. However, if like me you are breaking up your travels in the city, it’s a very pleasant way to spend a day and to see a little more of the island of Palawan.