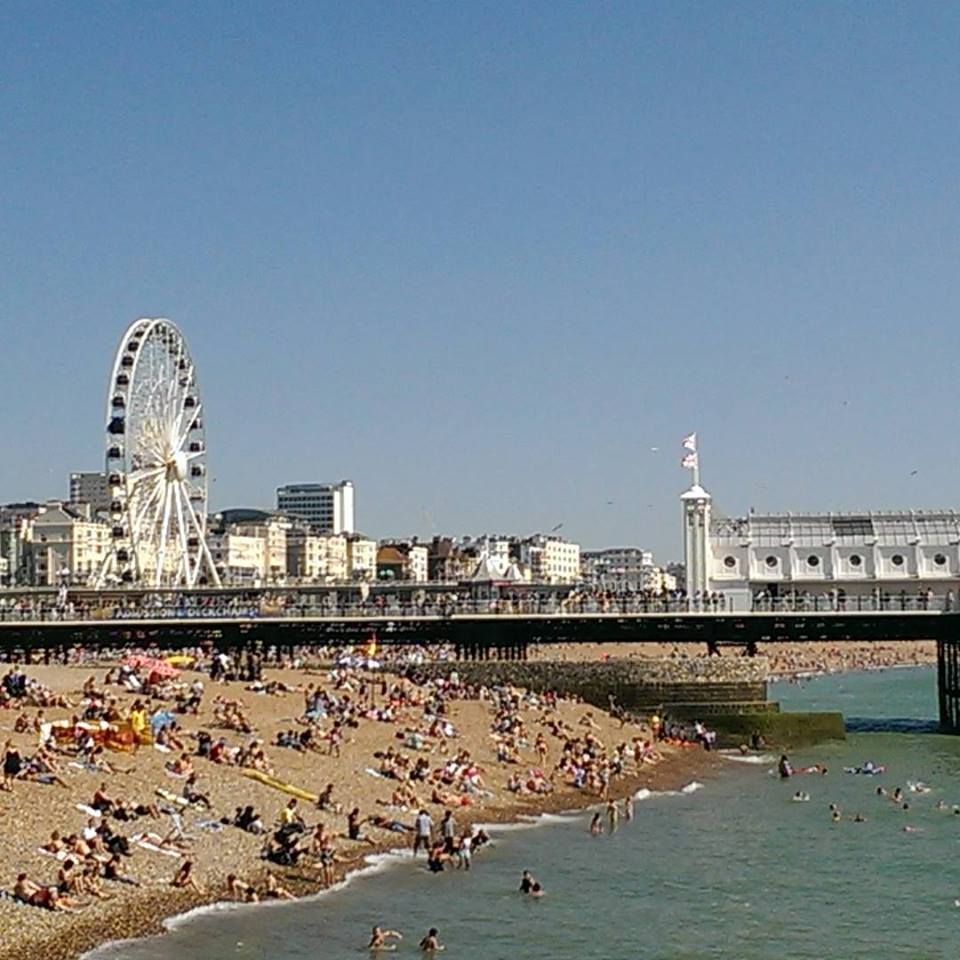 We Brits love to head to the nearest beach when the sun deigns to make an appearance. Pick up any British newspaper or switch on the television here when there’s a heatwave on, and you’ll see pictures of happy people packing out the sand, attractive young women splashing around in the sea in bikinis, and small children demolishing ice cream cones. So with Saturday looking hot and sunny, and the summer starting to draw to a close, Liam and I hopped on a train from Bedford, my current town just north of London, to head to the coastal city of Brighton. From central London it’s a mere 40 to 60 minutes by train, and for me it would be a must-do day trip for anyone visiting London when the weather is good.

It’s a short and easy walk down to the seafront, where there’s a long stretch of pebbly beach to grab a spot on. Start your day by wandering along the promenade, enjoying the sea air and picking up an ice cream from the many stalls along the way. For a slightly quieter section of the beach, turn right when you come out from the road by the sea, walking away from the pier. Take a towel or blanket to sit on the beach, as the pebbles can be a little uncomfortable otherwise! For lunch at the British seaside, it’s got to be fish and chips! Again, you’ll find plenty of outlets along the front offering battered cod and thick salty chips, as well as several places serving beer and cider in plastic glasses, so you can take your drink down to the beach. Make sure you check out the pier too; indulge your inner child by playing on the games in the amusement arcade, or braving the rollercoasters, log flume or various other spinning-around rides, or just take a seat and enjoy the view over the beach and the sea.

If you want to take a dip in the sea, we would suggest leaving it until late afternoon when it’s had a chance to warm up…at around 5pm the water was still pretty chilly despite the scorching temperatures of the day, but we manage to acclimatise well enough to have a swim!

Being a city, Brighton has the best of both worlds – a brilliant beach, but also a vibrant selection of shops, culture, restaurants and bars; there’s plenty here to entertain. However we decided to enjoy the balmy evening by grabbing some food and a cocktail in one of the beachside restaurants, watching the sparkling lights of the pier come on as the sky darkened. There’s a relaxed vibe to the whole place, with locals and visitors alike meeting for a drink down by the sea. The trains run late into the night, so you don’t need to watch the time…they also start again very early in the morning if you decide to make a full night of it!

Where else would you recommend visitors to London go for a day trip?