Yoga, parties, and the most evil mosquitoes yet: volunteering on Koh Phangan 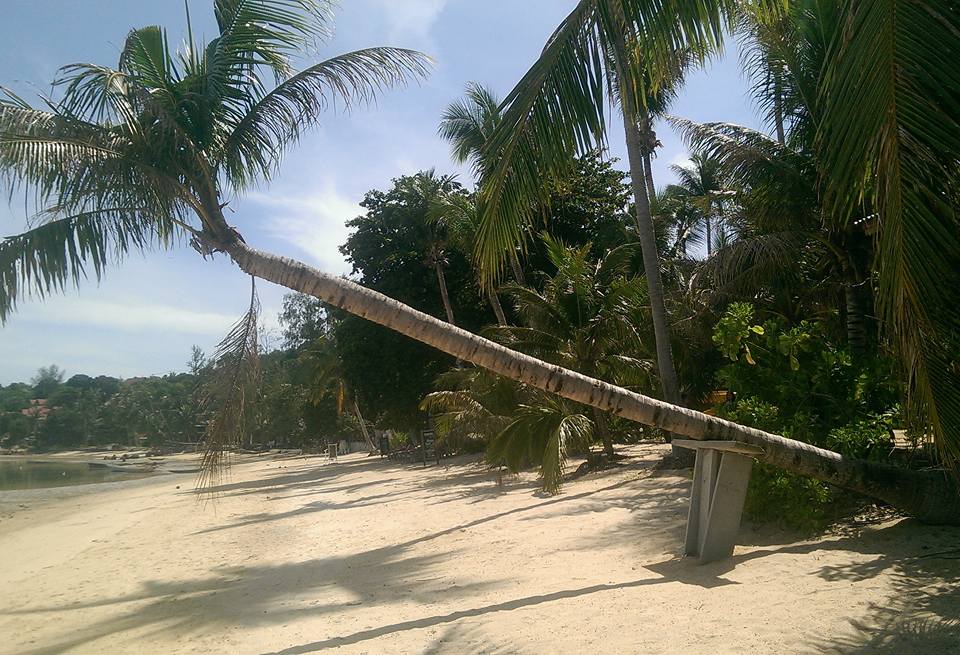 I wasn’t that excited about going to Thailand to be honest. There wasn’t anything luring me there, but I felt that I couldn’t really miss it out on a South East Asia trip, especially as it was kind of on the way of my route through the region. A friend had recommended a yoga school on the island of Koh Phangan which they thought I might enjoy, and I hadn’t been to the sea for a while, so I decided to go and check it out, embarking on an overland/sea journey to the island from George Town; fourteen not-very-interesting hours of travel, but so much cheaper than flying (meaning more pennies for a well-deserved Chang when I eventually got there!).

I had initially planned to spend around one week there, but when browsing the website of Gaia Yogashala, the yoga school I was headed to, I noticed that they were looking for volunteers to help run the place in exchange for free classes and a homecooked vegan lunch. I’d been looking at work exchange opportunities on Workaway for some time, and had tried to find a placement in a hostel in George Town, but had thus far been unsuccessful in securing something appealing. Working at Gaia sounded perfect, so I sent off an enquiry, to be told that they didn’t need anyone else at that point. I continued making my plans to go there anyway, looking forward to the yoga, when, two days before I left Malaysia, I received another message saying that they were now short on volunteers, and would I be interested in coming to join them imminently? I of course replied yes, given that I was headed that way regardless, and so, the day after my epic journey, I was sitting at a bamboo table enjoying the healthiest food I’d had in ages, and getting to know my new “colleagues”. I spent almost one month at Gaia. The work was easy; just signing guests into the classes, taking their payments, and setting up and clearing up the yoga hall before and after the sessions. With my social media skills, I was assigned the Facebook page to look after as well, promoting the schedule and answering queries. The people I met were lovely; from the other volunteers, to the visitors and expats coming to the classes. It was also good to have a kind of routine again for a little while. My favourite part of the morning shift – writing up the board for the day!

I spent most of my spare time taking advantage of the free yoga and discounted classes and workshops available to me as a volunteer. The 7.30am Vinyasa Flow session became my favourite way to start the day if I wasn’t on the morning shift, and I was able to indulge my love of dancing without the aid of alcohol in the beautiful Ecstatic Dance and Four Elements Dance classes and the wonderful Cacao ceremony. I tried out completely new things such as Shamanic Sound Healing and Rebirthing Breathwork. It may sound like a stereotype, but it is true that we Brits as a whole are reserved and quite closed-off; I made a concerted effort to push through this and to be more like the people I was meeting there. Some things were a bit too much for me – contact improvisation dance, I’m looking at you, with your body-on-body massage! – but I felt like I made good progress in opening my heart and soul and slowly inching my way towards the person I want to become, a mission I started with my ten-day Vipassana course in Malaysia.

I didn’t actually get to see much of Koh Phangan; this was mostly because I was too nervous to rent a scooter, having never driven one before. However, the beaches around Srithanu, where I was staying, were peaceful and beautiful (including the nudist one which yes, I did try, on my last day – pushing the boundaries of Britishness again!), and I was happy to spend my time here. The island is perhaps most well known for the Full Moon Party, but if you head over to the other side, where I was, the atmosphere is much more serene. That said, I couldn’t leave Koh Phangan without checking out one of the parties! I ended up going to the Half Moon Party which takes place one week before and after the main event. It’s the Full Moon’s cooler, more laidback cousin; a smaller affair which takes place in the jungle rather than on the beach. I did the whole thing properly, buying a flower headband and getting fluorescent body paint daubed on my arm, and actually had a great time. Koh Phangan however did have a major downside; the mosquitoes, the biggest and most brutal that I’ve encountered so far. It reached the point where the bites on my legs were so numerous and infected that my limbs swelled up and it hurt to walk, which led to a less fun week of pain, grumpiness, and having to wear my hippy pants however hot it got. Nothing stopped them – they couldn’t have cared less about the repellent that I sprayed liberally all over myself before stepping out of the door. If, like me, you are a delicious feast to these bugs, be prepared for battle!

My time on Koh Phangan flew by. Although I was ready for a break from island life by the end of it, I was sad to leave Gaia Yogashala and its brilliant classes and lovely community. Several weeks on, I still miss my morning yoga and the dancing. I’m happy that my first experience of volunteering on the road was a positive one too, and it’s something I’ll be looking to do again along the way.