A taste of Laos: a brief escape to Luang Prabang 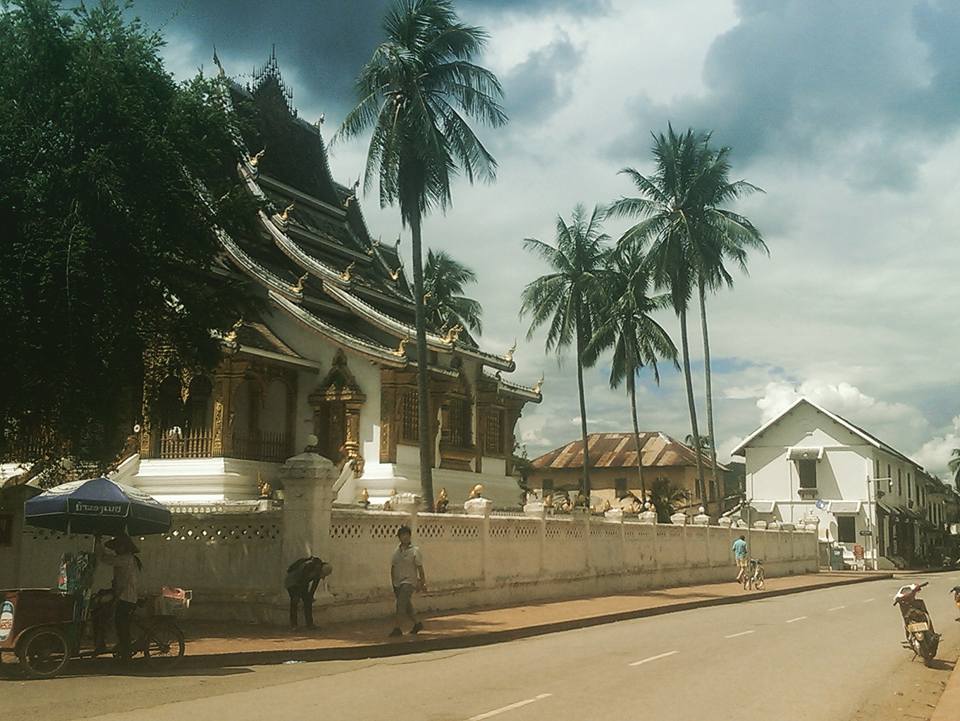 I hate to say it, but I was growing rapidly bored of Thailand. After my underwhelming stay in Chiang Mai, I took a minivan up to the mountain town of Pai. I was going to write a blog post about this, but although I had a pleasant time there, I didn’t really do much, so it would be a very short and probably pointless one! I enjoyed the cheap food from the Night Market every evening, morning yoga at the unique Pai Circus Hostel which doubles as a circus school, and lazing around outside my hut by the river, but when I started feeling like I was rocking back and forth when I closed my eyes to sleep at night, I realised I was spending too many hours per day lying in a hammock, and so it was probably time to move on and actually do something. For reasons which I won’t go into now because they’re lengthy, I still had a week or so to kill in Thailand before my flight to Vietnam. I honestly couldn’t think of anywhere else in the country that I wanted to go for that time, and so I hit on the idea of leaving for a few days. I’d seen signs in the travel agencies along the main road in Pai advertising buses to Laos. The Lao People’s Democratic Republic (to give it its proper name) had been on my original itinerary and then disregarded a few months into my trip, but finding a cheap flight to Luang Prabang, a city in the north, I decided to go and make an unscheduled stop in this country that I knew pretty much nothing about.

Most backpackers make the trip from Chiang Mai into Laos via a two-day slow boat trip on the Mekong river. I’m sure this would have been an amazing experience, but I was short on time so I went with the flight option (yes, I do feel guilty about my carbon footprint!). Lao Airlines were the most efficient I’ve ever encountered – we
left early and were taxi-ing to the runway while people were still getting settled in their seats – and one hour later we were descending past densely-forested green hills into a dark and wet city.

(on a side note, this was the first country I’d visited on this trip where I couldn’t just breeze through Immigration. A Visa On Arrival is required for everyone, paid in US dollars. A chart at the desk shows the various prices by country, with the UK being one of the most expensive at $35. But now I have my first shiny pretty visa!)

Happily the weather cleared up, and the next morning the sun was shining as I set out to explore. Luang Prabang is small and walkable, and a lovely city to wander around. Temples and French colonial buildings line the roads, and there are two rivers to amble alongside; the picturesque Nam Khan, dotted with fishermen out on their boats, and the majestic Mekong, the perfect spot to watch the sun set – even the young monks from the local temple came out to quietly observe the sight. There were monks everywhere as I strolled around the city, and in my hastily-done research before arriving, I’d read about the alms ceremonies taking place in the centre of town at dawn every morning, where locals and tourists line the streets to give sticky rice and other food to the monks as they pass by; the charity that monks live off. I’d also read that the atmosphere was usually somewhat spoilt by those visitors who did not behave in a respectful manner during the event, but having developed an interest in Buddhism this year after visiting so many temples and learning Vipassana – a non-religious practice but one which comes from the teachings of the historial Buddha himself – I decided to get up with the sun the next morning and go to merely observe.

I dressed appropriately – covered my legs and shoulders – and kept the requested distance from the procession as I unobstrusively took a few photos, but sadly the things I’d read online were correct; a significant number of the other tourists there had plenty of bare skin on display, laughed and chatted loudly, and leapt right in the path of the monks to get their shot. It was still a beautiful and unusual event to witness, but the atmosphere was certainly tainted by the disrespectful behaviour, and I could see some of the locals becoming (rightfully) irritated. Later that day I headed out of the city to visit the famous Kuang Si waterfall – if you’ve seen photographs of Laos, you’ve probably seen pictures of its green and blue pools. Around 30 kilometres from Luang Prabang, it’s a very popular day trip, and tuk-tuks roam the streets calling out for passengers to the falls. You can also book a shared van through your hostel – the option I took as I was solo so I suspected it would be cheaper. It was a Sunday and so the place was packed with local visitors picnicking at the waterside and swimming in the biting cold water as well as foreign tourists. The waterfall was impressive (even if not quite the colour promised by the photographs that I’d seen!) and a beautiful place to spend a couple of hours. I’d ambitiously worn my bikini under my clothes and would love to tell you I joined the brave souls jumping off the rocks, but I’m a wimp when it comes to cold water so I only managed a knee-length dip in the end! Things took a more sombre turn on my final day in Luang Prabang, when I set off to visit the UXO Lao Visitor Centre. I had no idea until I started reading up about the country that the Lao PDR is statistically the most heavily bombed country in the world; during the Vietnam War, the US dropped over two million tons of cluster bombs over the territory, a significant number of which failed to explode on impact. In the years since, huge numbers of Laotians have been killed or maimed by these unexploded ordnances, many of them children who see an interesting-looking ball on the ground and pick it up. This small museum highlights this sad history and the efforts being made to educate citizens on how to recognise a UXO and report it. I can certainly say that I learnt a lot from my time in the city.

I left Luang Prabang wishing that I could stay longer and see more of the country; on reflection, I should have just hung around in Thailand and saved Laos for afterwards, when I would have time to travel onwards. Given, however, that I wasn’t intending to visit at all, perhaps my boredom in Chiang Mai turned out to be a good thing, in pushing me towards a very worthwhile unplanned trip.